Super Black Bass 3D isn’t just another fishing game — it’s the latest entry in the series that invented the genre. First released in 1986 (that’s twenty seven years for those keeping score) for the Japanese MSX home computer, the game was ported to the NES a few years later. Even though it was met with middling reviews, it proved successful (to the point that carts still litter the most outdated pawn shops) and became a recognized title in gaming. Perhaps due to its lukewarm reception or because superior franchises were born, the series languished even with a string of predominantly Japanese exclusive sequels, never producing another notable entry. The last time we saw a release in the series was 2006’s critically ravaged Super Black Bass Fishing. So what we have here is the 3D debut of one of the longest-running video game series that many have heard of but never played that receives consistently poor reviews and mainly exists to be a fishing series that, well, exists. In the words of Scooby Doo, “ruh-roh…”

While fishing games tend to be generic, at least some have tried to add some color to the affairs. The main character of the recently released Let’s Fish! Hooked On, for instance, was a possibly-underage girl inexplicably sporting fangs, with her fly open and panties exposed. While that’s not a positive, at least it was interesting. Here, however, you play as the most generic looking character model that never speaks, can’t be customized and goes by whatever name you give them. Supporting characters consist only of a stereotypical TV host (why there is a dude in a suit with spiked hair and a microphone at a fishing tournament is anyone’s guess) and a female you work for…or with…or something, who is the most generic female looking character model possible and named Mary — they couldn’t even be bothered to think up a creative name. Throughout the game, you can either enter tournaments, do a training mode or use a free mode, but it all adds up to one thing — fishing. 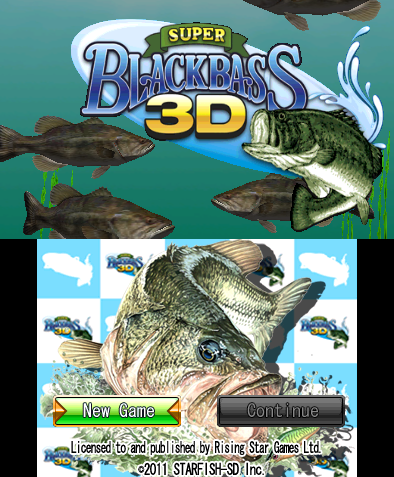 Some people just do not like fishing games; I’m not one of them, as I sunk hours into Sega Bass Fishing on the Dreamcast, played my fair share of Rapala and tried a smorgasbord of one-offs. When the gameplay is thought-out and presented in a polished package, the genre can be quite fun. Super Black Bass 3D, however, features wretched enough gameplay that it may actually sour casual fans on the genre itself. After choosing a mode, you set off to a shore and fish. To cast your fishing line overhead, you hold the 3DS vertically and flick it away from you, and to pitch it underhand, you move it towards you in a scooping motion. While it’s a neat idea to utilize the handheld’s gyroscope for fishing, it just feels wrong. If you cast without holding the top screen, it flips your top screen back and feels like it’s going to snap off — especially on a 3DS. The game recommends you hold the top screen with your thumbs when casting — certainly a must — but doing so doesn’t feel realistic or comfortable and is laughable that this workaround is the official way to play the game according to the “safety rules” in the tutorial.

Ironically, however, casting is probably the gameplay mechanic that works best. Once the line and lure are in the water, you hold A to reel it in. That’s it; no choice of speed, method or direction. Worse yet, it comes back at a snail’s pace. Most of the time will be spent holding the A button waiting for the line to retract and cast again in a better area with more fish. While Let’s Fish! had the problem of there being too many fish that don’t bite frequently enough, Super Black Bass 3D has far too few that don’t bite frequently enough. When the right lure is equipped, it’s a realistic ratio for fish that are curious, but anything besides will result in an almost complete lack of interest. When a fish bites your lure, you raise the 3DS vertically to hook it. Once hooked, the fish tries to get away and has to be fought to successfully reel in. The struggles of the fish, however, are laughable. When trying to escape, it simply slowly moves away in a straight line. The game says in the tutorial that fish will attempt to fight by moving left or right and must be countered by moving the analogue stick in the opposite direction, but they never do. They sometimes slightly curve one way, but it seems to have no implication on how it should be reeled  in. When a fish is finally tired out, it literally stays motionless in a straight line slowly retracting until it fights again and then stays nearly motionless going in a straight line away from you. The whole thing can take up to four minutes and plays out practically the same throughout the game. 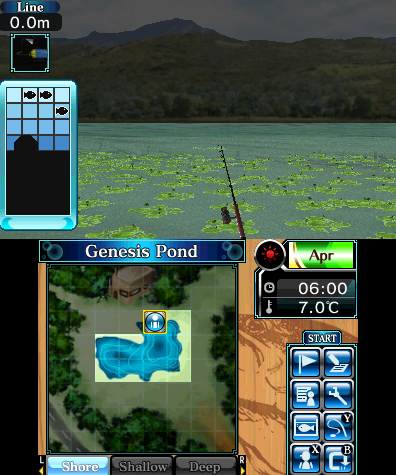 It’d be abysmal enough if it weren’t for how easy it is for line to snap, with tugging up just a second too long breaking it. Once broken, the fish gets away and you’re forced to go into a menu to equip a new lure and line. While that normally wouldn’t be an issue, here you’re given a finite amount to start with that must be resupplied via funds awarded from selling caught fish. If supplies are depleted before a tournament is over, there’s no way to exit out to buy more. Each tournament day must be quit one by one and the sluggish results and information manually skipped. Worse yet, if supplies and money are exhausted (especially early on), it becomes unplayable due to the fact that there’s no money to buy supplies and no supplies to catch fish and receive money.

Making things more intolerable are the substandard graphics that look more like an old DS title than anything released in 2013. Almost everything in the game is rendered horribly and heavily pixelated, from the fish to the water to the lures. Characters models get it the worst and look like something out of some nightmarish Game Boy Advance game. Worse yet (I feel like that’s been said far too many times), the 3D is one of the poorest showings the console has to offer, with such little depth that I routinely made sure I didn’t accidentally slide the depth adjuster down. Even if you could see it, mixing a motion game with a 3D one is an awful idea. The 3DS needs to be viewed with the “sweet spot” to properly see the effect, but constantly jerking around the console makes it hard to see straight and is a headache waiting to happen.’ 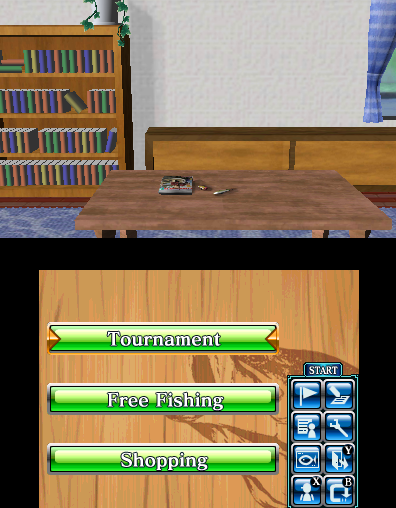 Fishing games are supposed to be relaxing, but Super Black Bass 3D was one of the most stressful gaming experiences I’ve had all year. Second-rate graphics, poorly thought out motion controls, bad music and some of the worst gameplay a fishing game has ever seen add up to an experience that is frustrating at best and unplayable at worst. As handheld fishing titles this generation have been abysmal to varying degrees, it’s impossible to recommend anything but sitting on the sidelines hoping somebody has the sense to produce something worth playing. Until then, don’t waste your money on tripe like this.