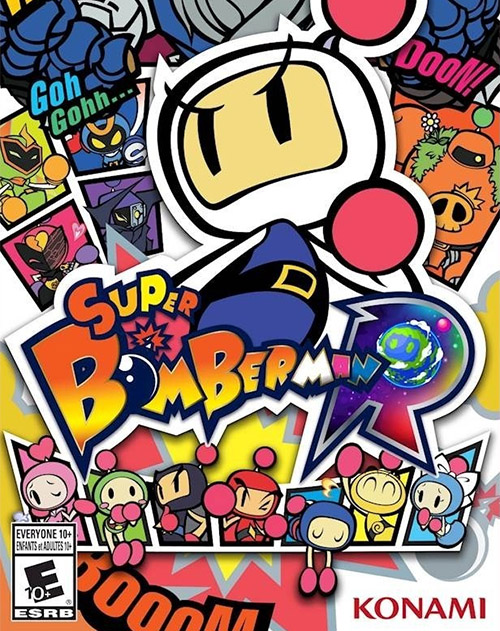 It says a lot about the quality of the Nintendo Switch launch lineup that Super Bomberman R is considered one of the most desirable titles. That’s not a slight at the blue (and, er, white) bomber, as he’s cemented himself as a classic character in his shocking 34 years of existence, but the popularity of the franchise has never come to close to something like Zelda. Yet for many people with a Nintendo Switch, Bomberman seems like the next logical purchase after making a home for Link. Although a bad thing for Nintendo and Switch owners alike, this is great for Bomberman as it will hopefully give a younger generation reason to experience retro gameplay that’s aged as like fine wine. With so much resting on Bomberman’s shoulders now after all these years and a near-decade absence, the question is if can live up to the lofty expectations it has on it thanks to being one of the few Switch launch titles.

Believe it not, Super Bomberman R boasts a story and while it’s just fluff, there’s more dialogue and plot than an arcade game like this has any right to. The evil Emperor Buggler (who is the latest iteration of Professor Bagura, a character who has been known by more names than Puff Daddy) is on an intergalactic conquest and has seized control of the five main planets of the Starry Sky Solar System. Meanwhile on Planet Bomberman, eight robotic lifeforms known as the Bomberman Bros. keep the world a safe place as they diligently train (aka slack off constantly), springing into action as soon as they find out about Buggler’s plan. Unfortunately for our brothers, Buggler has enlisted the help of the Five Dastardly Bombers, each of whom has taken residence on one of the five planets. Now it’s up to the Bombermen Bros. to spring to action and save the universe the only way they know how — blowing $#!^ up.

Throughout the Story Mode, you’ll head to each of these five planets, playing ten levels on each one. The levels have different objectives ranging from simply defeating enemies in your path to hitting switches or to finding hidden keys. Objectives switch up and new enemies are introduced enough to keep things interesting, but at the end of the day, gameplay boils down to dropping bombs to wipe things out and avoiding getting hit by said bombs or enemies. At the end of every planet, one of the Five Dastardly Bombers spread across the worlds is faced. These boss fights pack quite a challenge and take careful timing or special strategy to master. Making things more difficult is the fact that losing all your lives and coins during a set of planet stages makes you lose all progress and start over — rendering each planet a marathon run. If things get too challenging or not challenging enough, the difficulty can thankfully be adjusted in either direction, but even on easy there’s some challenge. 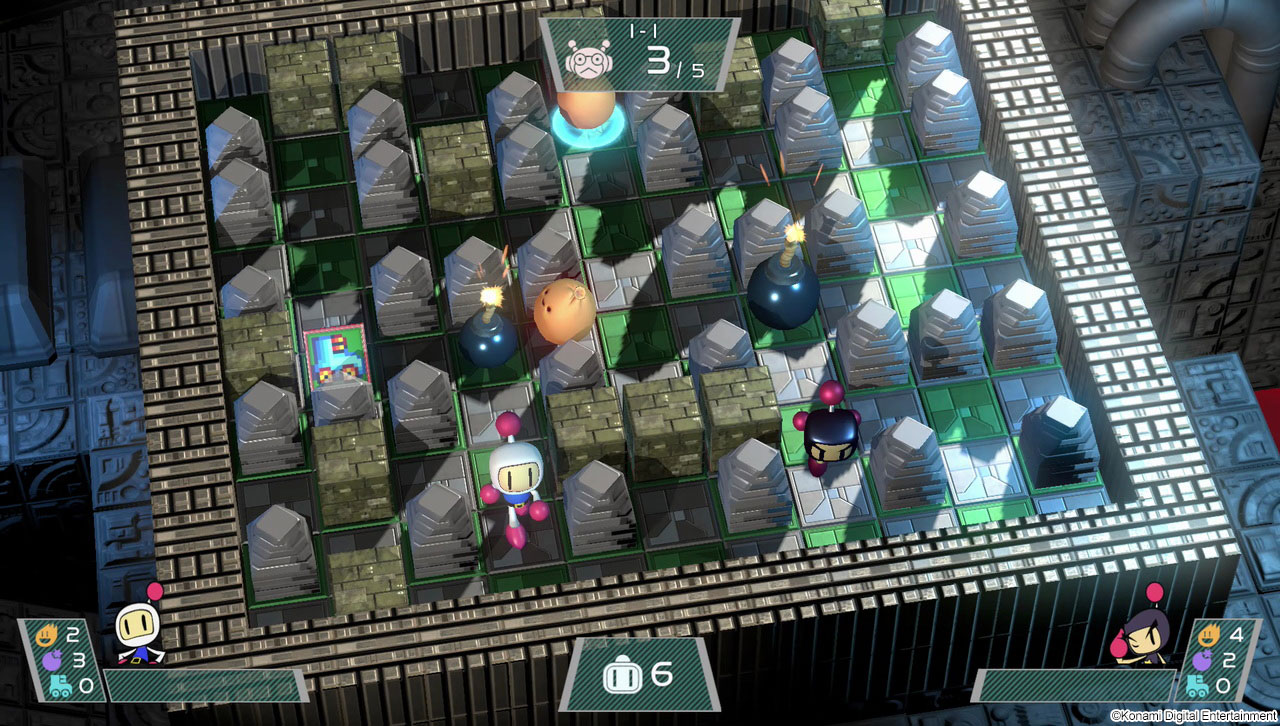 Unfortunately the Story Mode is over all too quickly. There’s roughly fifty stages in all and if you’re decent at the game, you should be able to complete everything in around 2-3 hours. There’s also not a ton of replayability as the stages aren’t all too unique and once you figure out the correct strategy, it’s hard wanting to go back and redo stages. Spacing out the story over 100-150 levels and adding complex variants near the end would have made this quite the triumph, but it’s at least diverting enough while it lasts.

Of course, the main draw to Bomberman has always been the multiplayer and it remains as enjoyable as ever. Up to eight players can partake, with four taking a corner when a match starts. In the following three minutes, everybody has to try to blow each up until one is left standing. This is the only multiplayer game mode and while there’s not much to it and it might seem repetitive, there’s a lot of strategy at play that makes it addictive and easy to sink hours into. It’s especially fun in person as the quick matches and constant near-losses lead to plenty of vocal action between friends. To make sure the gameplay doesn’t tire too quickly, eleven maps are included, each unique enough to make worth mastering or cycling between. 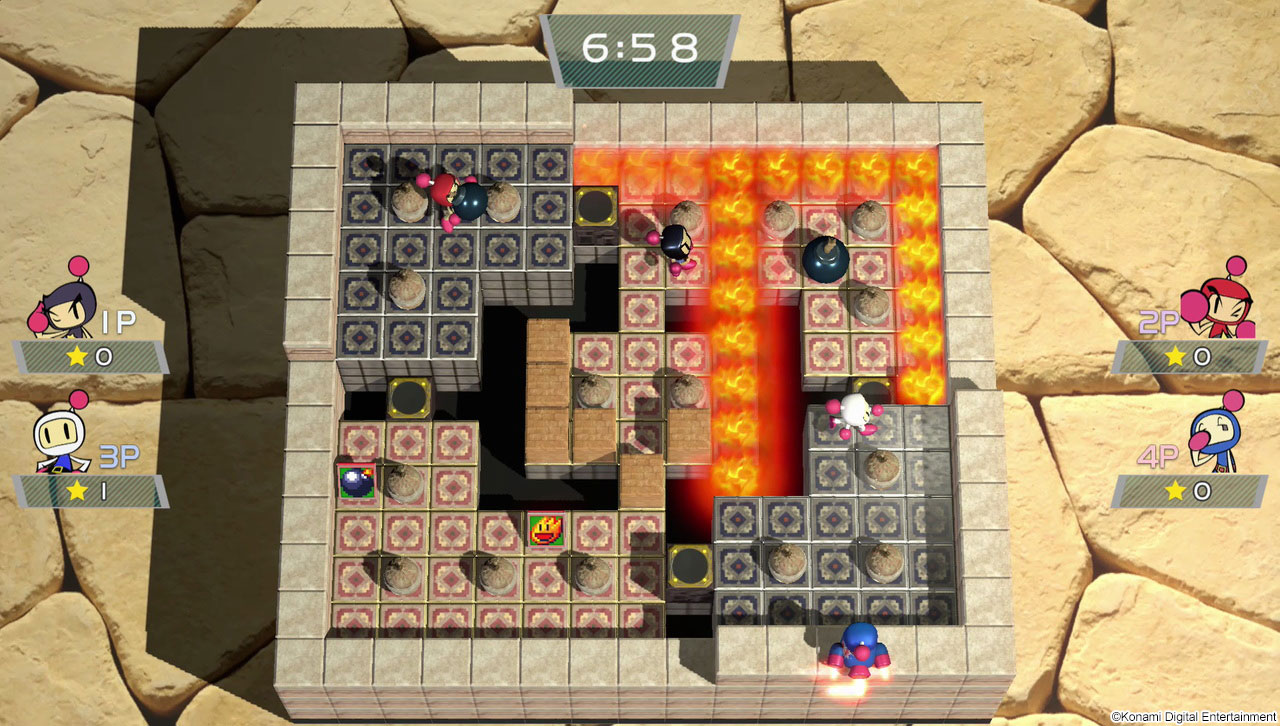 It’s good to have Bomberman back and in a meaningful way. It’s hard to believe seven years have slipped by since the last entry in the series (by far the longest gap yet) and it’s exciting to see the franchise’s resurgence as a full-fledged retail launch title day. It’s amazing that after so many years the same gameplay can remain captivating, but the developers really tapped into something special all those years back. Although shifting to a pseudo-isometric viewpoint, not much has changed here and it remains as addictive as ever. Unfortunately, the very thing that makes it appealing also holds it back. There’s nothing new here versus the many other Bomberman games and although polished and featuring a colorful story, there isn’t a major reason to return. Addictive as it may be, there’s not much content here and camera angle and control issues strain things further. That being said, it’s still a blast (pun fully intended) and can easily make for a great party for those looking to be social with their new console. A perfectly good “B game” for Zelda, Super Bomberman R is a cute ball of fun, but could have been more.