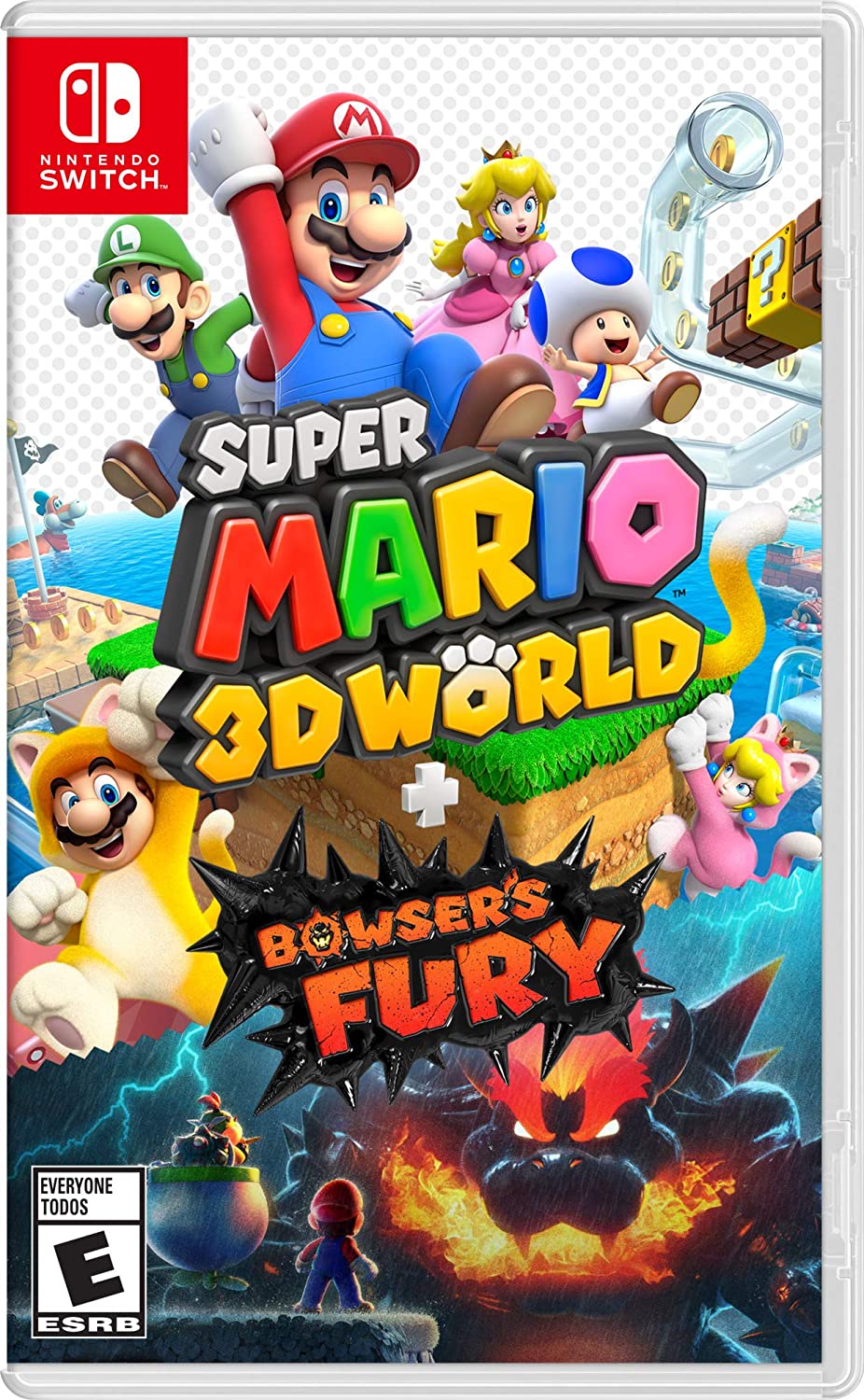 In 2013 the Wii U owners would get introduced to Super Mario 3D World, a successor to the 3DS title 3D Land. This unique take on the level-based platformer would go on to be the Wii U’s second best-selling title after Mario Kart, although considering it was the Wii U, this wasn’t exactly a hard feat to accomplish. Fortunately over seven years later a port of the title is now here for the Switch, complete with brand new content for both new and old players alike. With the addition of online multiplayer there’s a lot new here, so is Super Mario 3D World + Bowser’s Fury worth picking up?

There are two stories featuring Mario and friends that can be chosen right off the bat. The first is the original Super Mario 3D World tale in which Mario, Luigi, Peach and Toad find a mysterious clear pipe that they fix up. A Sprixie appears from it in desperate need of help before being captured by Bowser before their very eyes. They take chase after Bowser through the pipe and find themselves in a new world they’ll need to make their way through in order to save the Sprixies and put a stop to Bowser’s new reign. On the other side there’s Bowser’s Fury which features Mario discovering a mysterious black goop which sucks him into a world covered in that same black liquid. Here he comes across Bowser Jr, who is desperate for help to save his Dad for the bizarre rage that has overcome him and turned him giant. This time Mario must work together with Bowser Jr in order to collect Cat Shines and put a stop to one of Bowser’s most terrifying forms ever created.

The basic movement and gameplay is consistent between the two playable modes which can be freely selected between on the starting menu. The main difference is that in 3D World players can choose between four to five characters whereas Bowser’s Fury only includes one. In the main campaign Mario, Luigi, Peach and Toad each have their own unique mechanics to make them enjoyable to play as. Mario is the standard who excels at no particular trait, Luigi is slippery but has a high jump, Peach is slow but can float in the air and Toad is a speeding bullet that can hardly jump. Once the main story has been beaten and the second stage of the bonus world accomplished players also unlock Rosalina who is slow but has an attack she can use without any powerups. This version of the title also received a speed increase for every character so their movement across the board is considerably faster than before. This makes the slowest characters, Peach and Rosalina, actually feels significantly more fun to play than ever before. On the other hand it makes Toad almost feel uncontrollable at times because he’s so fast, but that’s now just more part of the chaotic fun. 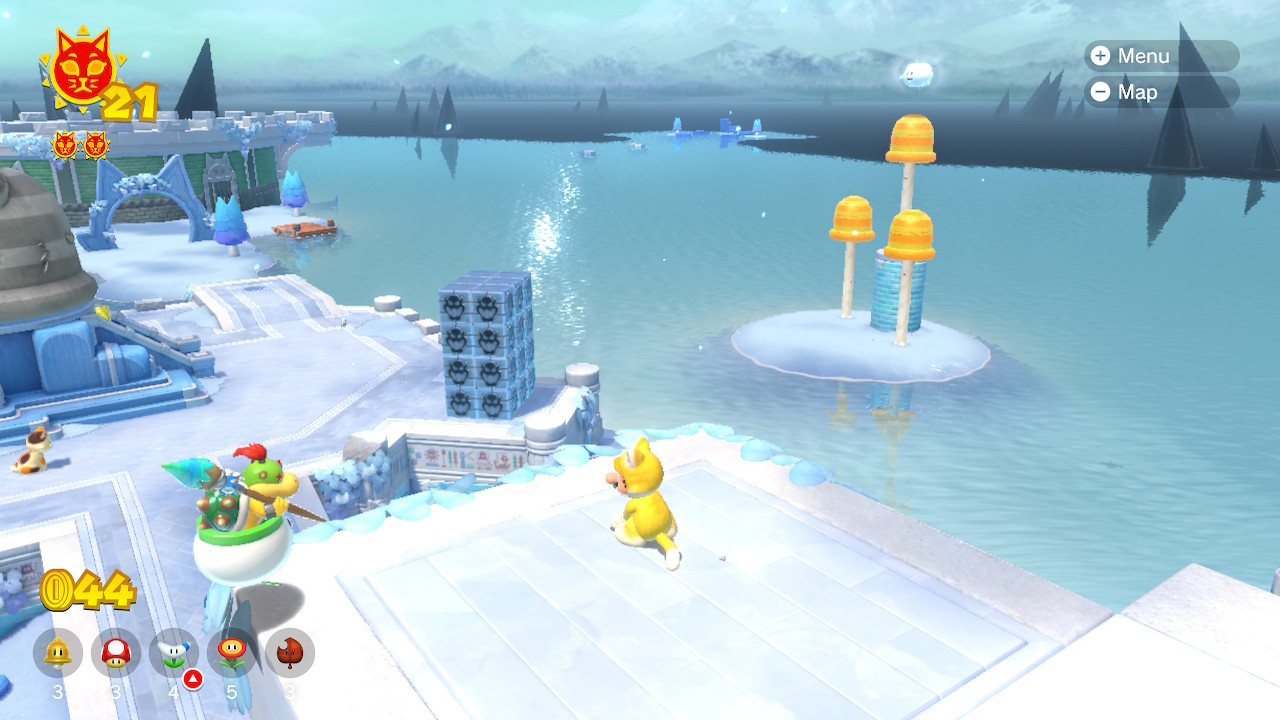 In 3D World the overworld acts as a map that can be freely explored before levels are entered. Once there players go through a stage with the goal of reaching the flagpole. In each stage there are three hidden green stars and typically a stamp to be collected that help towards objectives to continue through the campaign. This is the biggest part of 3D World and makes up over 80 stages total to be conquered along the way. Every stage feels unique and in typical Mario fashion brings in new mechanics to be learned and mastered while getting progressively more difficult each time. The main powerup featured is the iconic Cat Suit that allows characters to both attack and climb walls for a brief time. Up to four players can get together and play at a time and in solo players can choose whoever they like to take on stages. Captain Toad also appears as bonus stages where he must collect the green stars without jumping and navigating a unique level in order to come out victorious. For the first time ever in this version of 3D World up to four players can join in on Captain Toad stages, which makes for a great change given originally anyone else playing had to watch while the first player did it alone.

On the opposite side Bowser’s Fury takes place in a world that starts covered in a black paint that Mario is unable to touch. This is a large open area that can be freely explored but the threat of Bowser looms ever constant in the background. Mario travels through to different zones marked by cat arches where he can enter and is given a task to complete in order to earn another Cat Shine. This can be as easy as reaching it on a high point or defeating enemies, but secret objectives usually lurk around as well. The Cat Shines are needed to awake the Giga Bell that allows Mario to transform into his giant cat form in order to fight the super-sized Bowser. The first few times Bowser is defeated, the area will expand and give Mario more places to explore. Cat Shines themselves will also occasionally help in expanding the area that can be explored, but it will be a long journey until Bowser can finally be defeated. Although the journey mostly focuses on Mario, Bowser Jr does also assist as an AI companion. He can also be played as a second character locally with another person where he can attack and reveal question marks painted on the wall or he can be turned off entirely for those who don’t want his help, but it’s a nice way to include him in the journey to save his Dad. 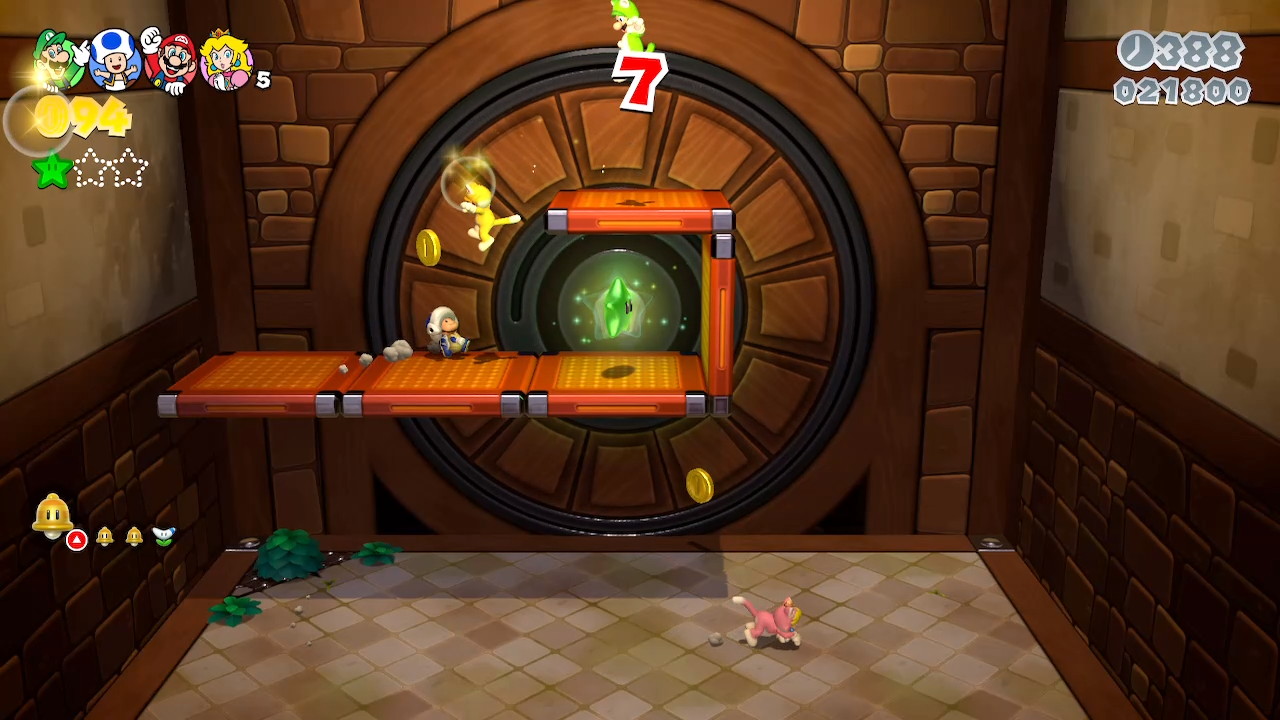 One of the largest draws to this remake is the new online functionality. The original 3D World was exclusively local multiplayer which is perfectly fine, but it’s always nice to have online if there’s a chance. This online mode can only be played with people on each others friends list, but once done there’s a simple lobby in the main 3D World hub that can be selected to either join or host. Joining up is quick and easy and can be done at any point while playing solo. The only down part is that only the host gains progression through the campaign, but there’s plenty of reason to replay with friends. The experience will likely vary based on one’s own internet connection, but there were little issues during online play. The framerate appears to be lowered to thirty instead of sixty while playing online, but makes up for it by being a fun and consistent experience. Unlike Mario Maker 2 the online offers a genuinely fun and consistent way to play online and the ability to play with any friend around the world is a wonderful way to enjoy one of the best Mario titles.

The music of 3D World was already one of the mainline Mario’s strongest and that doesn’t change in this enhanced port. What’s even better is Bowser’s Fury adds great new songs that fit the tone and world that players explore as Mario. The visuals are still as gorgeous as ever with it still managing to play and look fantastic even in handheld. It would be nice if there was a way for additional players to jump into an online lobby that’s already going, but it’s still quick and easy to start a new one at any time for more people to join up. Bowser’s Fury is a short campaign at around 4 to 6 hours to complete, but genuinely offers a great new experience that won’t soon be forgotten. 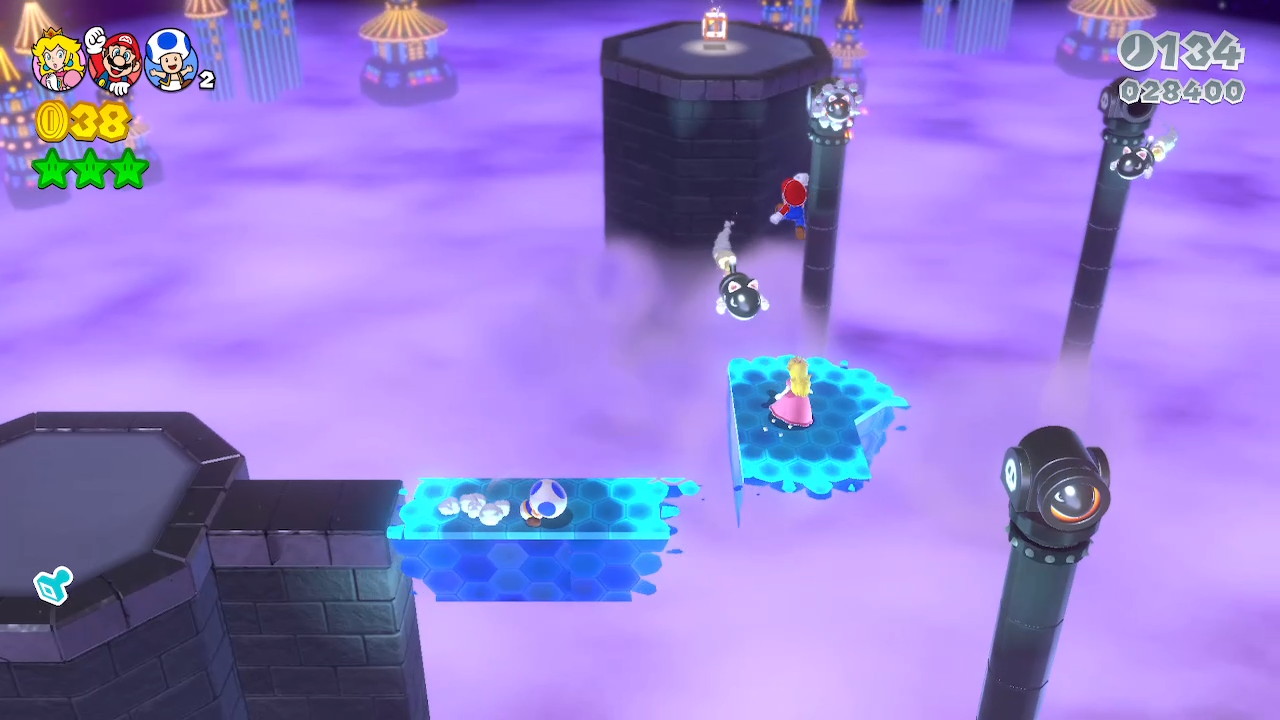 Super Mario 3D World was already a fantastic Mario title that alone made it worth owning a Wii U back in the day. The inclusion of Bowser’s Fury fixes the character speed and the addition of online have made this one of the greatest Mario experiences to date. It’s hard to put into words the pure joy and chaos this enhanced port has brought, but considering the main campaign was already fantastic alone, it’s only been improved tenfold by the ability to bring it online and make for some of the most enjoyable chaos to ever exist in the Mushroom Kingdom. Whether wanting to play alone or take it online with friends, Super Mario 3D World + Bowser’s Fury is absolutely worth picking up and one of the most ridiculously fun online experiences on the Switch.