Over the past year, we’ve seen countless complaints aimed at the Wii U, raning from the specs/cost to the overall lack of quality titles. Despite the console getting support from Nintendo and quality titles like Pikmin 3, The Wonderful 101 and Wind Waker HD releasing, people still called the system out. Now that the first heavy hitter, Super Mario 3D World is out, will things change for the Wii U or is Nintendo expecting too much for Mario?

Super Mario 3D World starts off like every other Mario game. The gang is together and things are great until they find a transparent warp pipe. Mario and Luigi fix it (remember, they’re suppose to be plumbers) and a fairly like creature, known as a Sprixie, appears. The Sprixie explains that Bowser came to the Sprixie Kingdom and has been capturing their kind. Before you get a chance to help, Bowser appears and captures the green Sprixie. Naturally, Mario and the gang chase after Bowser to put a stop to his latest plan. 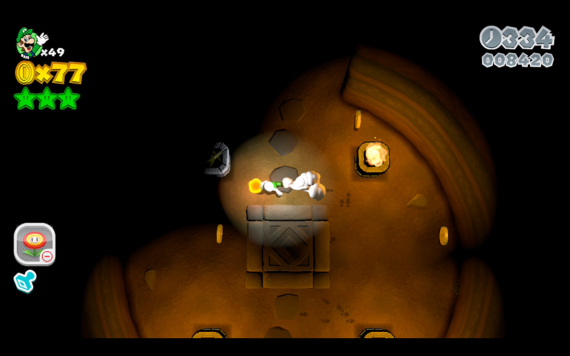 After you finish the painfully cliché opening, you get your first look at Sprixie kingdom. At first, Super Mario 3D World feels like your standard Mario title. You have some new powers, like Cat Mario, Cannon Box and the ability to make copies of yourself. These powers are implemented in various ways across the worlds and you’ll need to master them if you want all the complete the game, get all the green stars or finish your stamp collection. However, Super Mario 3D World isn’t afraid of taking chances either.

Some of the best levels in Super Mario 3D World, are the ones that take more chances than your standard fare. One of the best levels was Hands-On Hall, where you need to get to the top of a pagoda. In this building, there are various sliding doors you can open with touch and gongs you can ring by tapping. Ringing the gongs will also result in enemies appearing or coins falling, which is a nice little touch. Another fun level is Switchback Ruins. This level is a lot more reminiscent of The Legend of Zelda and is basically a dark cave with a few fireplaces. To aid your quest, you’re given a number of fire flower power ups, which can be used to see ahead or light additional fireplaces. Not the most original level around, though it was still a wonderful change of pace.

Besides changing up the level design, every character is given two perks. The first perk is a unique ability that makes them stand out. Mario is “easy” to control, Luigi jumps a lot higher, Toad is the quickest, Peach floats and the unlockable character, Rosalina, can attack, which also boosts your jump. Depending on the level, these skills can make things easier or more difficult and offer different ways to play. In addition to these abilities, there is at least 1 specially designed button for each character. These buttons tend to unlock stars/stamps, so look out for them.

In addition to having a robust story, Super Mario 3D World has a lengthy post game too. Upon finishing the game, a space ship will appear and take you to a new world. This world has about 8 new stages to complete, plus the Mario Galaxy stage that also unlocks Rosalina as a playable character. These levels have more of a space theme to them and contain some of the most difficult levels in the game. After this, another space ship will appear and this ship will take you to the bonus world. Bonus world offers about 15 more levels, though each level is a more difficult version of a story stage. While this might sound lame, some of these levels offer some uniquely difficult twists. For instance, a few levels have you start with 30 seconds left on the clock. Throughout these worlds, there will be time extension items, which are absolutely necessary to finish the level. What makes these levels interesting, is that it really isn’t possible to beat them in one try. On average, it took me about 8 tries to find all the stars and effectively manage my time. These levels might not appeal to everyone, though they do offer a welcomed change of pace. Another fun level has you chasing after a flagpole. On this level, you have roughly 100 seconds to catch up to the flagpole and complete the level. While this is easily accomplished with some skill, you need to drag this stage out if you want all the green stars. Again, not the biggest changes, though they offer a challenge without being too cheap.

In addition to new worlds, you can also unlock a game called Luigi Bros. As the name suggests, this is Mario Bros. with a Luigi theme. Since this game has been long forgotten, Luigi/Mario Bros. is basically an arcade version of Mario. Instead of having worlds and stages, there are two pipes that shoot out various enemies. To defeat these enemies, Mario must knock them over and then walk over them. This works the same way as jumping under a box to defeat an enemy on top. The arcade doesn’t play particularly well, nor is it the best Mario game (probably among the worst), though it’s still a nice tribute to Luigi and another game to play.

If that’s not enough, various worlds have hidden warp pipes to discover. Upon finding a hidden warp pipe, you will be transported to a new area. Some of these areas contain toads house, where you can get power ups and others contain special levels. Most of these are optional battle stages, though one of the does contain the “golden train” level. This hidden, unnamed and completely optional level, seems to be a reference to New Super Mario Bros. 2 and takes place on a golden train with about 1,000 coins you can collect. After finishing the stage, there is a slot machine that can give you up to 777 more coins. Sadly, this stage seems to be one play only, though it was still a nice touch and a unique offering hidden away.

Before we get too far ahead, lets talk about the Wii U features. As we all know, the Wii U gamepad had a touchscreen, which some games use in unique ways. In Super Mario 3D World, it grants you the power to break boxes/push question mark boxes and interact with the world. This can save you some time or offer some unique teamwork opportunities. It’s a lot harder to do these things alone, though it’s in no way impossible. As I previously mentioned, the touchscreen also allows you to interact with the world. This includes tapping trees, stunning enemies and figuring out new solutions to classic problems. Besides adding gameplay elements, there are also community features too. Throughout Super Mario 3D World, you’ll come across these items known as stamps. These stamps allow you to use various Mario characters/poses/powers in your Miiverse messages. For the social gamers out there, this is a huge perk to collecting all the stamps and is a fantastic way to be witty/fun without a lot of artistic talent or effort.

In addition to offering a fantastic gameplay experience, Super Mario 3D World is simply gorgeous to look at. Most of the levels are bright and vibrant and the Bowser Land world is stunning. Even the darker stages have a lot of charm, which says a lot about it.

Super Mario 3D World is the Mario experience we’ve always treasured, but with some fantastic changes to the formula. Between the hidden levels, new powers, each character having strength and uniquely designed stages, this is easily one of the more memorable Mario titles. Simply put, if you own a Wii U and love Mario, then you should definitely pick it up.