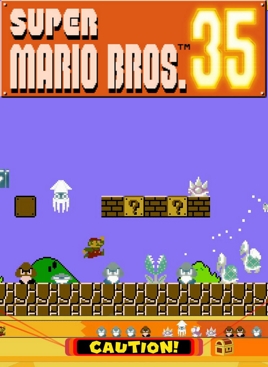 Mario has been an icon of gaming since he first appeared in the arcades. A king of platforming, Nintendo made one of the most recognizable video game characters to ever exist. It made sense with his 35th anniversary this year that they’d decide to go all out with a fantastic collection and tons of other exclusive goods. One of the big surprises was Super Mario Bros 35, a battle royale of sorts that plops players in the original Super Mario Bros. with 34 other players competing to be the last one standing. So is it worth diving into this unique title while it’s still around?

Usually Mario is out to save Princess Peach, but this time around it’s an all-out survival with no end in sight until every other Mario has lost their life. Mario 35 is quick to jump into with players able to start up quick matches and get going as soon as other people load in. There are two ways to go about this as well, with the first being a regular battle. This lets players choose from the SMB stages they’ve unlocked as their level choice before one is randomly selected from all the players, so prepare to almost always start with 1-1 when choosing this mode. The secondary mode is Special Battle, in which a random assortment of levels are chosen and there’s often increases in certain enemy types or other modifiers. The other main difference being players always start with coins in Special Battle to give them a head start if they begin at a more challenging level.

While at first it may seem like the average romp through the Mushroom Kingdom, a lot is different when fighting against others. Much like Tetris 99, there’s no direct combat between players, but instead they can choose which person they target with the bumpers or analog stick. Defeating enemies will send them to other players and vice versa, meaning Mario will quickly stumble across a variety of enemy types in his way. Even Bowser can randomly appear in the average stage should another player defeat him. Fortunately there are ways for each person to get the upper hand using coins. Since each player only has one life, coins act differently this time around. Once a person has twenty coins they can use their random item box which has four different effects. These are a mushroom powerup, flower powerup, super star and a screen-clearing pow block. Saving up coins to use in the midst of a challenging level is a big strategy, or using them as soon as earned to get through stages faster. It’s worth noting that every coin collected adds to the player’s overall total, which can be spent on a starting powerup in the normal 35-player battle if they so choose. Coins earned in stages will also increase a player’s level which doesn’t affect gameplay but does unlock additional avatar icons for players to select. 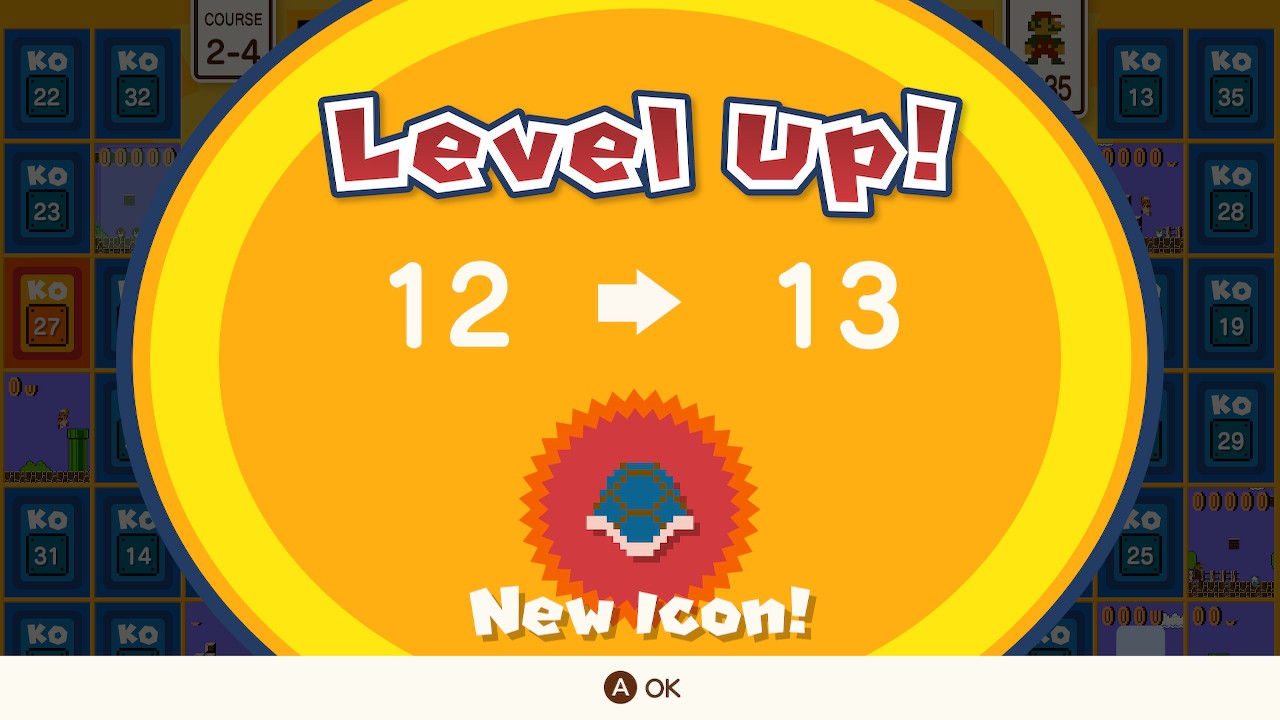 The amount of time Mario starts with varies based on each mode but it consistently goes down between each stage and losing it is, of course, a game over. It’s usually easy to pick back up, however, as killing enemies or collecting powerups Mario already has will increase it. Defeating multiple enemies in a row by jumping on them will even reward more time at once, while using a fireball will reward 1 second per enemy. Every time Mario makes it to a new stage it’s added to his course roster which can be selected in 35-player battle and also the course practice. Course practice is a fantastic way to familiarize ones self with every Mario stage they’ve unlocked as players can essentially play through the entirety of Super Mario Bros. this way. The interesting thing is these levels aren’t timed, making it the first time they’ve been officially playable this way and allows players to fully explore each stage to find secrets that can help them during full matches.

While most of the music heard is straight from the original Super Mario Bros., the menu remix is fantastic and feels exciting and enthusiastic while getting ready to jump into a match. Interestingly there have been some major changes to how Mario handles and those expecting a one-to-one translation of his SMB mechanics will be in for a surprise. For one, Mario can now actually fully jump off of enemies for a boost. Getting hit will only decrease the current powerup level by one and grabbing a fire flower while small will turn him straight into fire Mario instead of just acting like a mushroom. His momentum and jumping remain the same otherwise, but these changes actually work fantastically with the style of play that make things move along much faster through each level. It is, unfortunately, just the Super Mario Bros. style that players will go through. It feels like a missed opportunity not taking advantage of the Mario 3 or Super Mario World styles in this collection, but given the odd choice to discontinue the title entirely on March 31 of next year, it’s not too surprising. It’s also a shame that there’s no way to set up matches with just friends like Tetris 99. 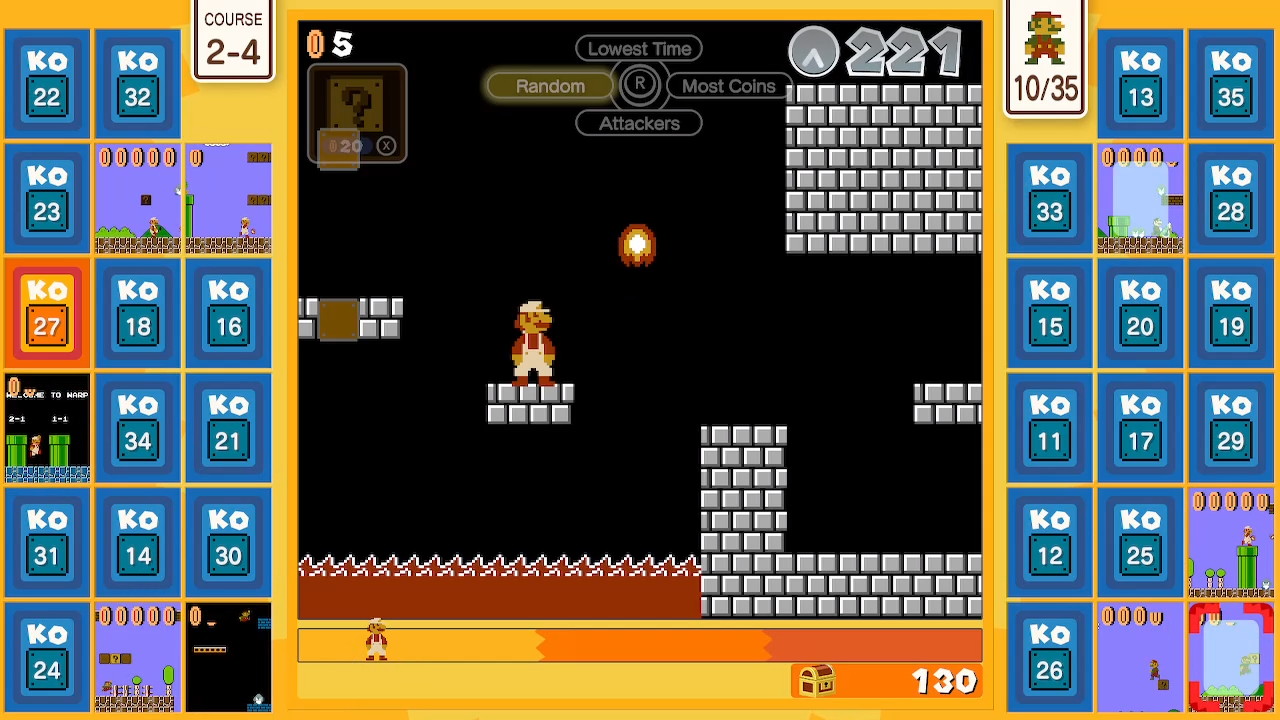 Super Mario Bros. 35 is extremely addictive to keep playing over and over, trying to get that top spot no matter how long it takes. Matches can last a good amount of time with the final remaining group of players, so it becomes a strategy match of trying to send threatening enemies to everyone else, hoping they slip up. There are so many creative concepts here and it’s nice to see such wild ideas for the battle royale genre popping up this year that make things silly in the best kind of way. It’s a crying shame this title won’t be around forever, but as a free title for Nintendo Switch Online subscribers, it’s a fantastically fun time all the same. Anyone looking for a crazy new challenging way to play the original Super Mario Bros should give Super Mario Bros. 35 a try and jump into the fray.