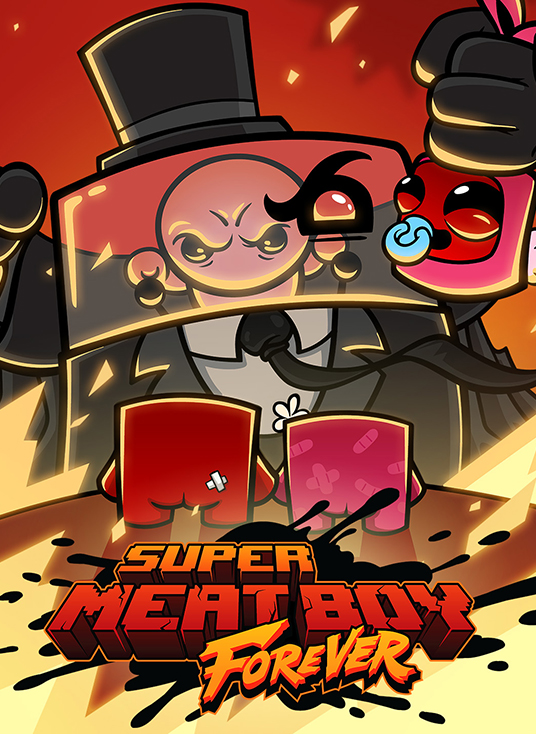 How many buttons does it take to play a game?  As many as necessary and no more, as it turns out.  There isn’t an art form out there where minimalism is a hindrance rather than a challenge and gaming is no different.  Super Meat Boy Forever ditches the joystick in favor of a super-simple two-button control scheme and then proceeds to wring every drop of potential from its simplicity.  Precision controls mean the challenge can start high and work its way up from there, because the less the brain has to think about what it’s doing and instead focus on doing it, the better it can perform.

Super Meat Boy Forever picks up a fair length of time from the conclusion of the original Super Meat Boy, released just a little over a decade ago.  Doctor Fetus has been defeated, Meat Boy and Bandage Girl settled down and hid a kid, and all is peaceful in the world.  Until, of course, Doctor Fetus comes back to kidnap little Nugget.  This time Meat Boy is rested and ready, and Bandage Girl is just as tough.  The two of them set out chasing Doctor Fetus and nothing on Earth is going to stop them running full-tilt towards the rescue of their child.

Correction: Saw blades, wandering critters, balls of electric zappy-death, bottomless pits, lasers, spikes, needles, razor wire, and other sharp and deadly hazards will do a great job of stopping them.  Or at least temporarily, until they respawn a few seconds back at the nearest safe zone ready to charge forward again.  Super Meat Boy Forever is an auto-running platformer with no brakes and precision controls, with every hazard designed to put its two buttons to the test. 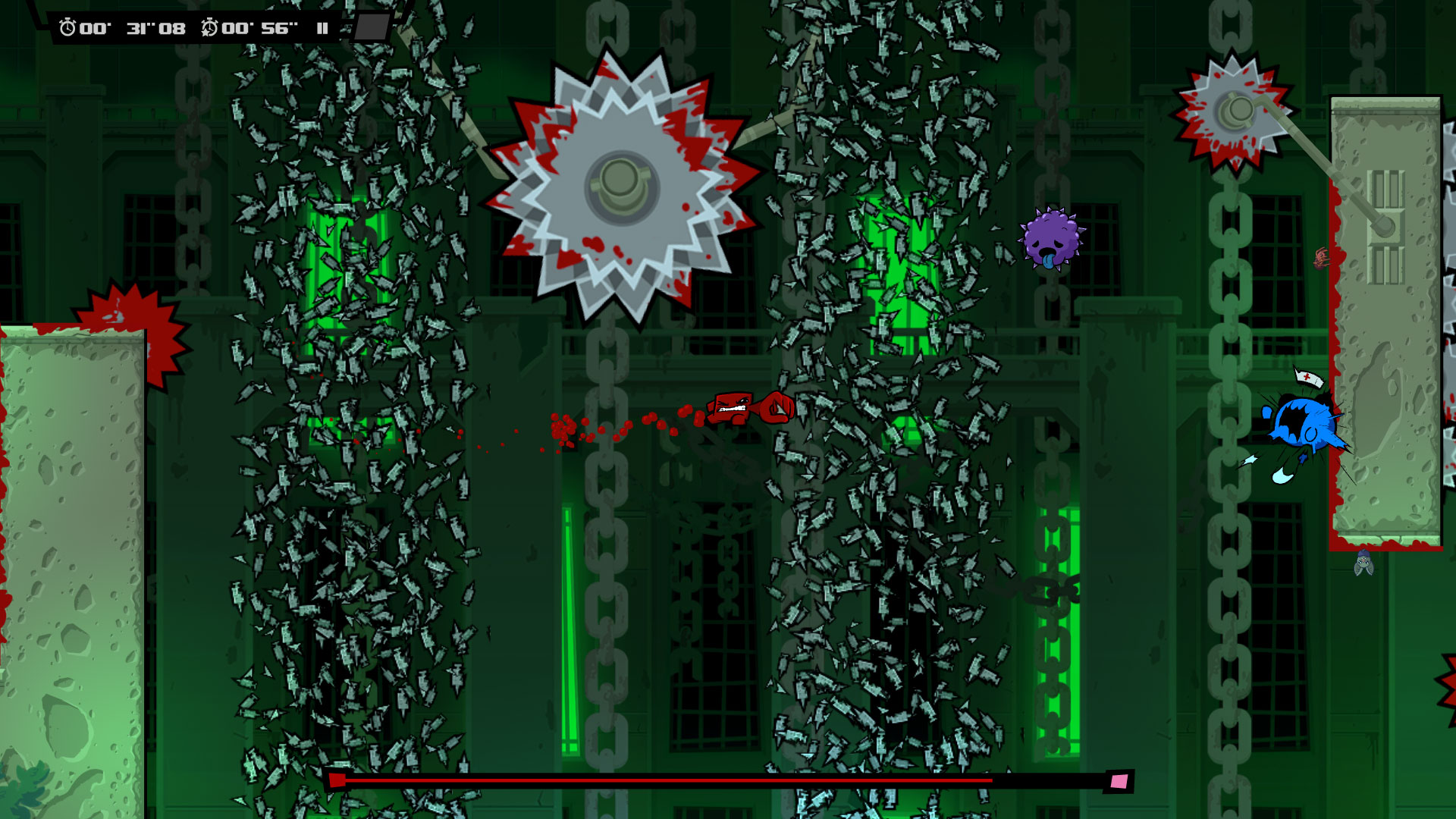 The first button is jump, which doubles as dash-attack in mid-air.  Hold it down for more height/distance and hit it again for a perfectly horizontal dash with fist or foot extended.  Just this one mechanic means you can target thin gaps between blades or run off the edge of a platform and still target a landing area inconveniently placed underneath an overhang.  The second button is for down, either sliding flat along the ground or plunging back to earth from a jump.  It doesn’t completely negate forward momentum when used in a jump, but even so it offers a lot of control over the arc of travel, allowing you to get decent height at the start while still nailing the landing.  Like the jump button this also doubles as an attack, although you need to be careful because while the slide can go as long as the surface holds up, the punch/kick phase isn’t so lengthy.

When playing with a controller each hand takes care of one button, simplifying the controls even further.  I can’t stress enough that “simple” and “easy” are very different things, though, because Super Meat Boy Forever breaks out the challenge from the very first level.  Even when well into the final world I could go back and lose a life or two in the first level of the game, if only due to being quick on the jump button while trying to shave off a fraction of a second on level completion.  Jump over spinning blades, down to nail a fly on the way to the next platform, down again on landing to slide under the next set of sawblades and then a series of wall-jumps over a gap that needs the air-dash to make it from one side to another is a basic challenge.  Eventually you’ll need to run into walls to stop for a minute or slide down a wall a little further than what would seem to be necessary in order to time the next set of actions, letting giant crates of dynamite explode before jumping through the place they used to be.  The action requires skill and precision, but is also broken up with frequent checkpoints.

Super Meat Boy Forever balances its difficulty with a forgiving checkpoint system and infinite lives.  The gap between death and restart is less than a second and it rarely puts you back far.  This means that the game can demand the kind of precision that’s only possible with repetition, and while I ran across a few areas that wore out their welcome after a few dozen deaths (not hyperbole), they were much easier to clear on the next attempt.  Plus it helps that just as in the first game each death leaves a splatter behind, so it’s kind of entertaining to see a particularly tricky section turn red or pink with the gooey remains of its heroes. 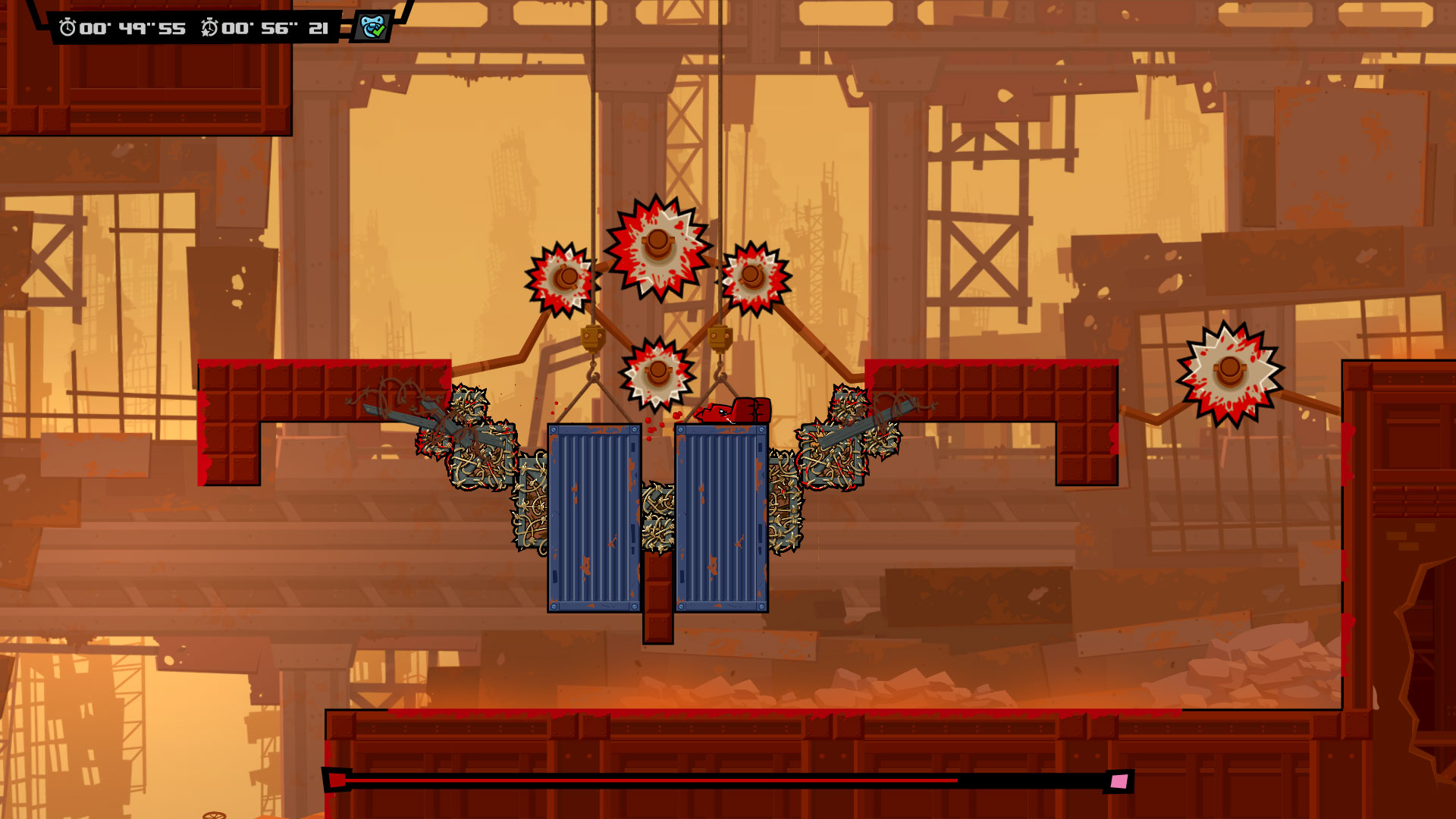 Once a level is complete there are a couple of good reasons to go back and explore a bit, or at least as much as possible in a game that handles movement for you.  Each level has a time goal and clearing it opens up the Dark World version that’s roughly 200x harder than the original version.  Additionally many levels have a pacifier in there somewhere, and collecting enough of them can unlock new playable characters.  It’s worth noting that the pacifiers aren’t so much hidden as difficult to collect, so it might be a while before seeing anyone but Meat Boy and Bandage Girl.

If it gets too hard, though, there are always other options to pursue.  Primarily starting up a new save file, because each level is built from randomized parts dictated by the save file’s seed.  That means you can replay a save game as many times as you like and level 2-4 (for example) will be identical each time, but starting a new save will generate a whole new challenge.  The randomization is the now-standard hand-built areas strung together in a random order, but there are a huge number of pieces to build from and mastering just a single run is an epic undertaking, much less getting good enough that you start noticing repetition.

It’s worth bulling through to the end if only for the cutscenes that start and finish each set of levels.  There’s a lot of love put into each one, giving Meat Boy, Bandage Girl, Nugget and Doctor Fetus a huge amount of personality.  The in-game art matches the cutscenes as well, and while most the animation is simple it’s bright and detailed, with a cartoon feel that helps take the edge off the more punishing challenges.  There are a few quirks that still need ironing out, though, such as the game asking about cloud save or local each time it’s loaded up or the lack of a restart-level option.  There’s nothing like just missing a pacifier and triggering the next checkpoint, requiring Pause, Quit, Reload, to change a worthwhile challenge into a waste of time. 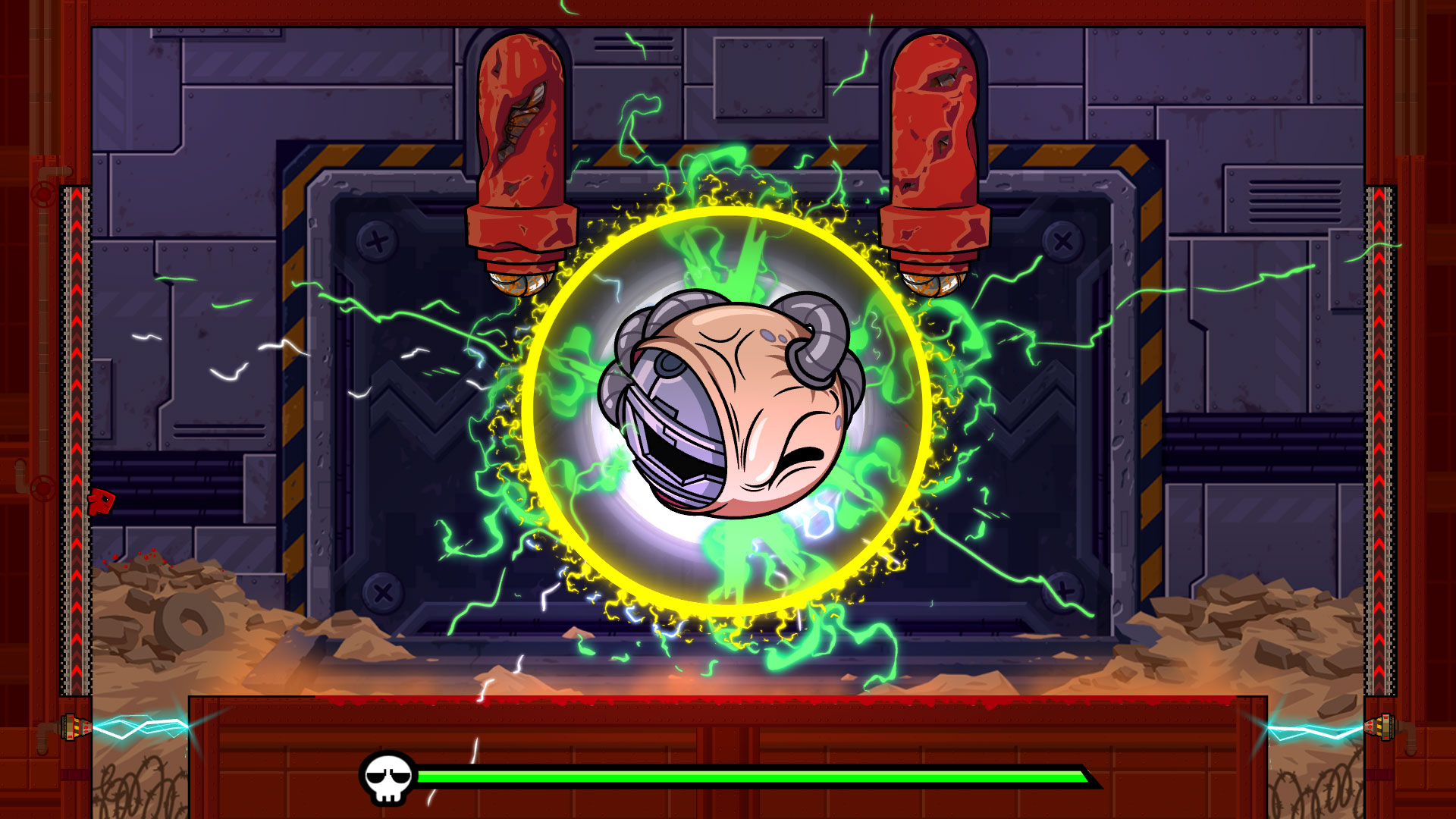 Super Meat Boy Forever is an incredibly polished and fully worthwhile sequel to the platforming classic.  While it’s a different beast thanks to being an auto-runner, it uses the seeming simplicity of the genre to allow the player to do a lot of complicated things.  Each section of the game is designed around a specific move-set, and things can quickly get complicated when you only need to worry about two buttons.  Super Meat Boy Forever asks a lot of the player but also makes sure that they’ve got the tools to master its challenge while also being considerate enough to make each one approachable in bite-sized chunks.  A perfectly-run level takes less than a minute and is divided up into sections that are rarely longer than ten seconds, but each second requires focus.  And if that focus slips then a retry is instant with little time lost, making it easy to try again, and again, and again until Doctor Fetus finally realizes what a terrible idea it is to antagonize the Meat Boy/Bandage Girl family.