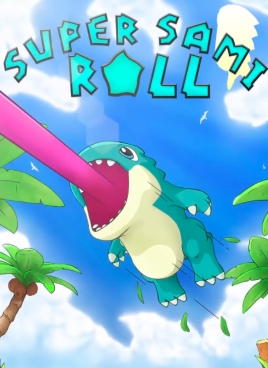 Super Sami Roll is a quaint, challenging ball rolling/platforming hybrid that does a lot right and manages to overcome its few rough edges to deliver an enjoyable experience. Sanzai Games set out to create something that was fast-paced and fun to play for all ages, and largely accomplished that goal. Impressively, it starts off with a fully-animated intro showing Sami zooming around and grappling-tongue-ing around the world, impressively showing off what you’ll be experiencing for the core game. It’s an addictive adventure that tests both your platforming mettle, but also ball-rolling skills as well. It’s tough, but always fair and has a diverse lineup of stages that keep things visually interesting.

Sami rolls around a bit like one would if they were a marble in Marble Madness or Marble Blast Ultra and not like a monkey in Super Monkey Ball since in that series the player is moving the stage around the ball. Movement feels natural and there are more platforming mechanics at play here than in any marble rolling-style game we can recall. Most games of this type with platforming in them limit things to jumping, but Sami is able to wall jump and use his tongue to move across large gaps.

There’s a bigger learning curve here than in a lot of rolling-style games because it’s equal parts platformer and ball-roller. Each can be easy to mess up since balance is the key to being able to enjoy either style. The platforming sections are particularly interesting and challenging due to things like pendulum-based platforms being used that swing from side to side — adding challenge into landing and requiring trial and error to best figure out the approach. Jumping onto it when the platform is too high will result in death, as will going when it’s too early as you’ll just slide right off. This adds almost a puzzle-platforming element to the action, which ties into Sami Roll’s variety as there’s even a collect-a-thon aspect to things that ties into the platforming too. 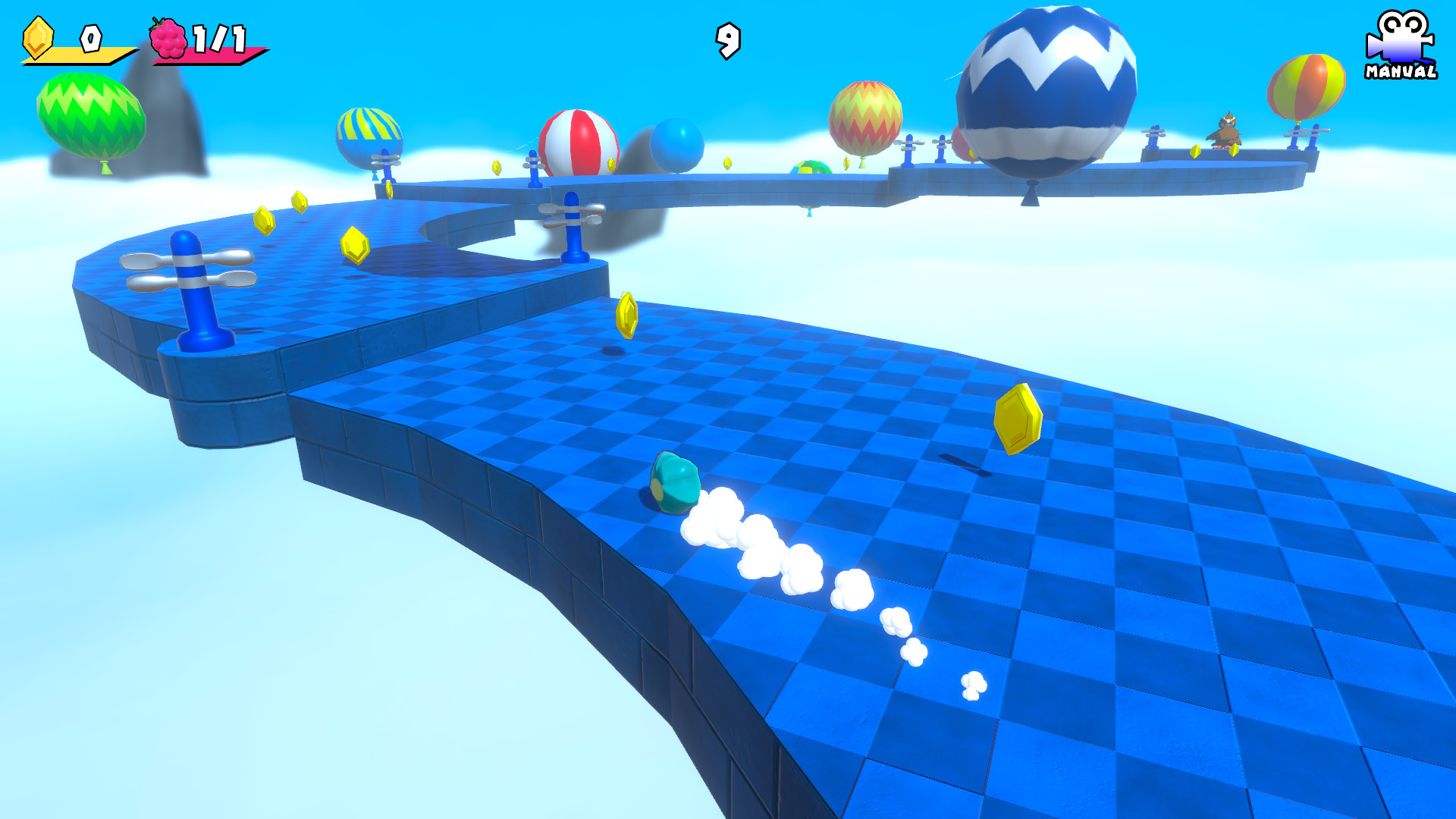 Every stage has coins to grab as a means of signposting where to go alongside a hidden fruit to help reward exploration. Enemies keep you on your toes as do things like spike traps. The stage design evokes everything from Monkey Ball-style checkerboard patterns and area design to Mario Sunshine-style water and platforms to even Sonic-style speedy areas that truly test your platforming skills. The in-game camera is solid and it can be moved around with the right stick, but the default camera does a fantastic job of following Sami around behind the back — but being able to move it around is helpful when it comes to making micro-adjustments to get a better idea of where you are in relation to the environment.

Beyond that, Super Sami Roll does have quirks to its gameplay that take some getting used to. The tongue mechanic allows the player to get from point A to B quickly, but it can be tricky to make sure that you’re at just the right area to also jump up as otherwise it’s a retry. Other issues include areas where you’ll spin around a trapeze with the tongue and dismount — but dismounting is tricky to get a hang for due to the default camera angle and sometimes you just can’t spin the camera into a good spot to see where you are in relation to the trapeze and the environment. There’s some jank in the overall game that needs work and the amount of “homage” to other games does come at a cost.

While Super Sami Roll does a fine job of emulating parts of the look of Monkey Ball, Mario with its bright look and even Not Thwomp areas, Marble Madness for rolling trap sections and Sonic with some of its stage designs, that comes at the cost of giving the game its own visual identity. It has its own gameplay identity, which is huge — but there’s something lacking when it comes to creating its own visual identity beyond the tongue-dashing portions which are truly unlike anything else in those franchises. It’s a shame that this happened, but it’s also not a huge deal in the grand scheme of things because in doing the game this way, it does feel more familiar and adds a kind of “what if?” feeling to a Monkey Ball game set in a Mario-style world. 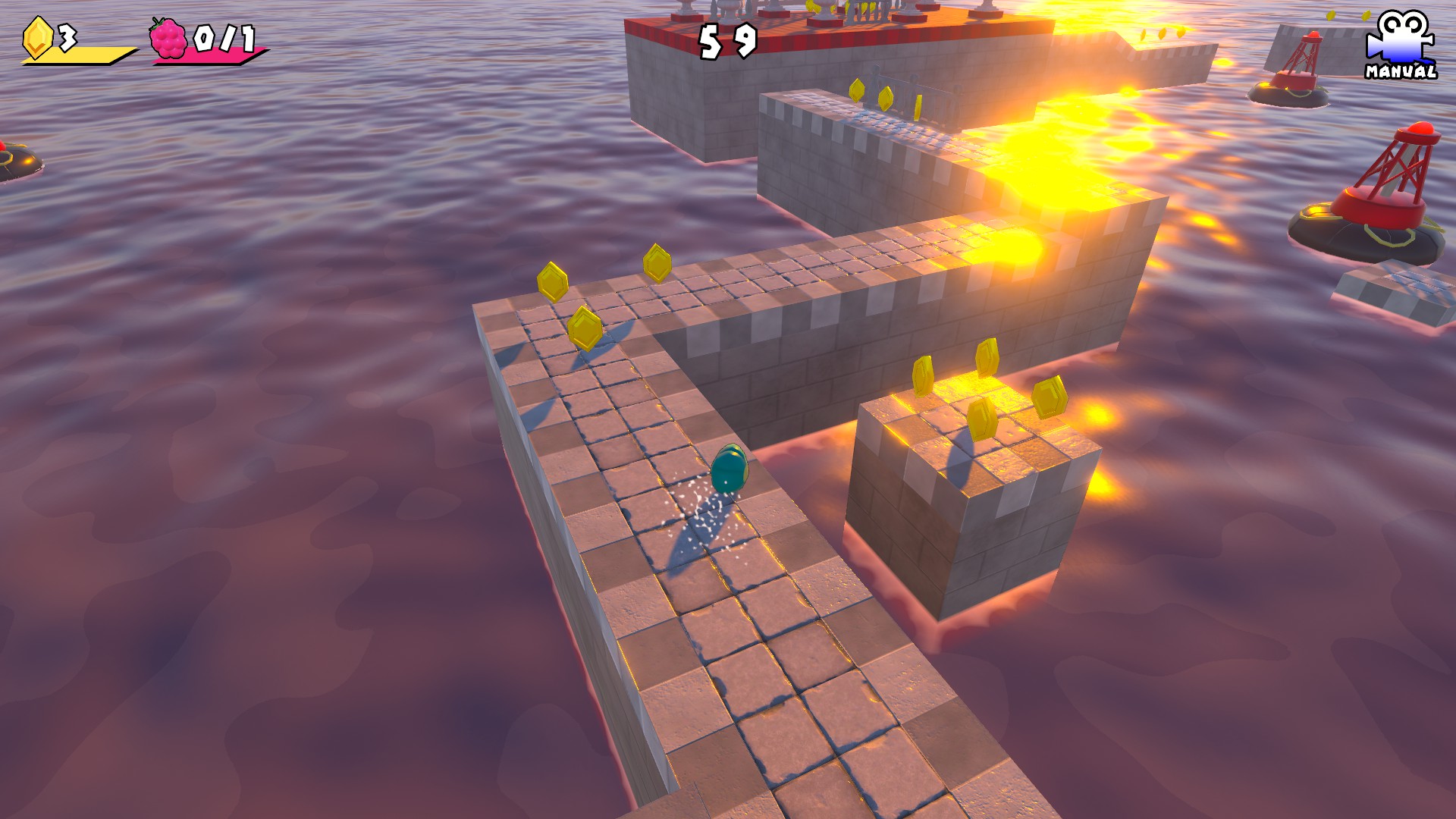 Visually, Super Sami Roll looks good with strong colors and impressive lighting effects making the in-game worlds shine. The environments look solid, with water effects in particular looking impressive. The game as a whole gives off a look like what the Gamecube would be in HD — everything is clean, but not cutting-edge and it totally works for this kind of game. It might not work for every game, but like A Hat in Time before it, as long as you have a game concept that would have worked many years ago and isn’t aiming to be bleeding edge graphically, you can can get away with things not looking jaw-dropping. Everything moves smoothly, quickly and consistently — there are no framerate issues and Super Sami Roll is well-optimized too. It ran just as well on my seven-year-old everyday desktop with integrated graphics as it did on a four-year-old gaming rig with dedicated graphics.

Musically, Super Sami Roll does a fantastic job of providing a fast-paced soundtrack for more action-based platforming sections and blending that in with melodic tunes when the player needs to concentrate. It’s a balancing act that works well and the OST is addicting and something that’s well-worth listening to after the fact. Parts of the soundtrack evoke the Sonic Adventure series, and anyone who liked that series’ soundtrack will enjoy Sami’s as well. The sound effect work is solid too, although Sami’s quips are annoying — but a volume slider in the menu helps minimize that aspect of things. 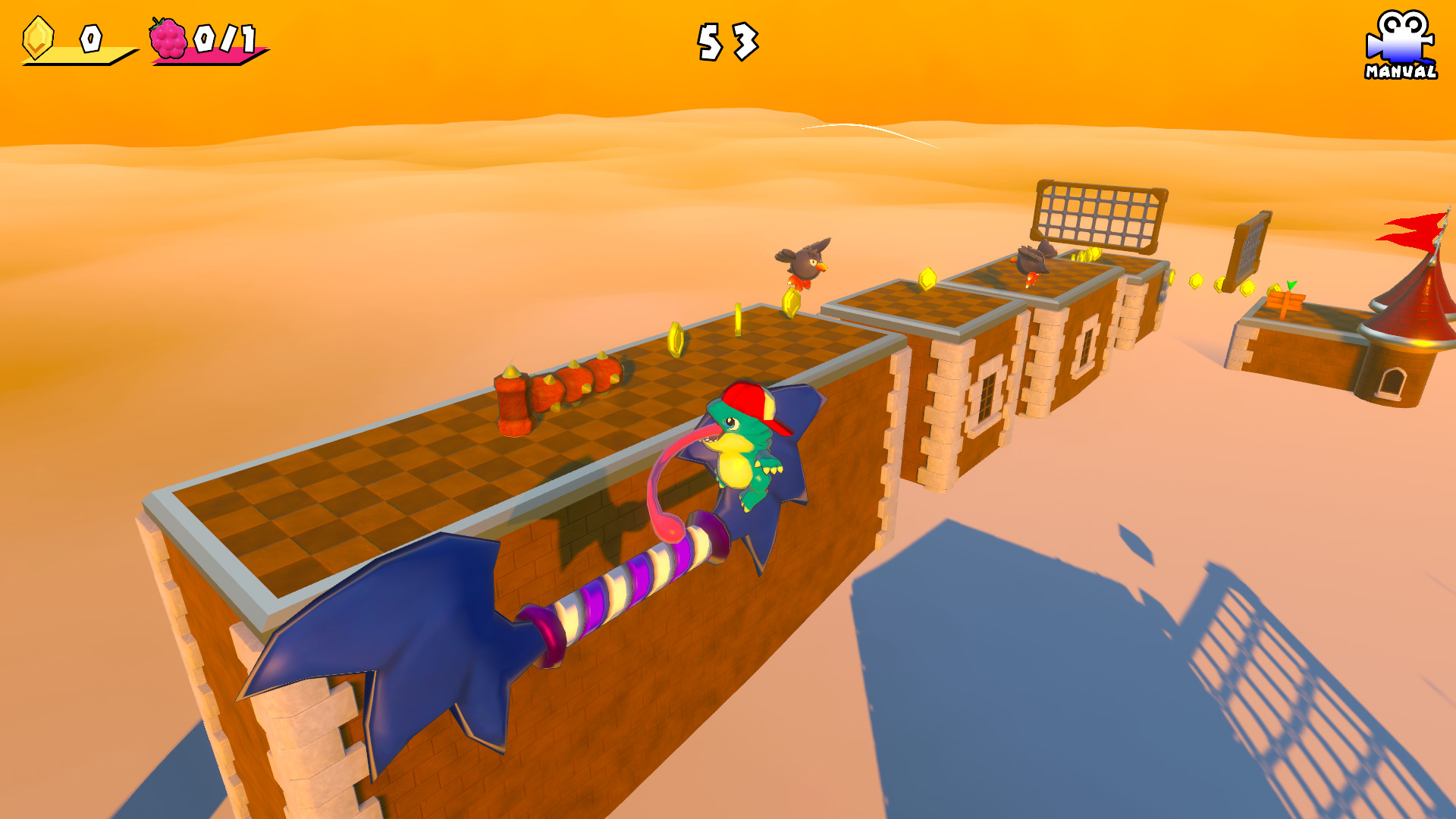 Super Sami Roll is a great game that holds itself back by being too beholden on paying homage to other franchises instead of blazing its own trail. As a ball-rolling game, it’s good and as a platformer, it’s pretty good — but not as good as the titans of the industry. It needs fine-tuning to make the platforming side more cohesive, but winds up being greater than the sum of its parts due to how fun everything is. There’s a layer of jankiness to some things — like the tongue-moving mechanic, but it still enables the game to be a lot of fun despite that. It’s a good-looking and better-sounding game, and a solid pickup for anyone who loves ball-rollers and wants something that integrates more platforming into that genre.