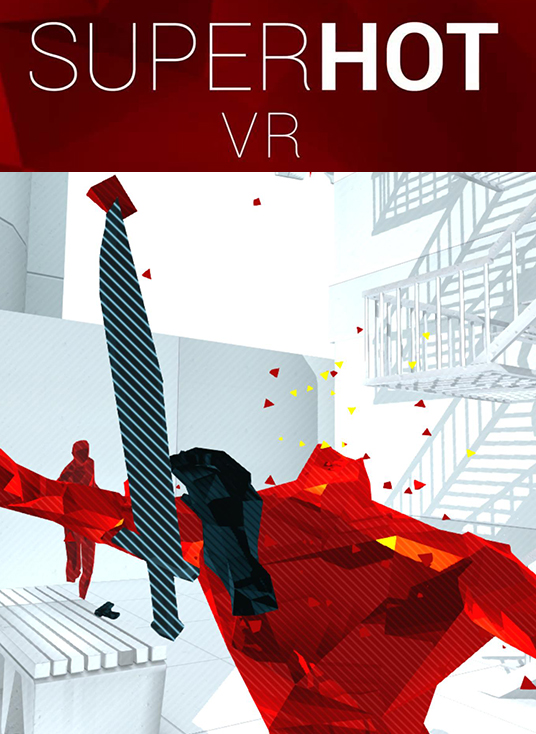 Everyone is waiting for a VR killer app, but it’s looking more and more likely that’s not going to happen. Instead it seems we’ll be seeing a slowly-improving series of games that add to and expand on what’s come before, with the occasional title that takes what we already know and goes nuts with the presentation. SuperHot VR doesn’t do anything that hasn’t been done already, but does it so well and with such a great sense of style that it’s easily one of the best pure gaming VR experiences available.

By now the central hook of SuperHot should be familiar- time only moves when you do. That’s not entirely true, of course, but everything is going slowly enough that you’ve got all the time in the world to consider your next move before exploding into a flurry of violence. What was an FPS in its original incarnation is now an all-new game built as a VR shooting gallery, and you no longer move through the full environment but are constrained within the small, safe area you’ve set up for the headset. As it turns out, that’s more than enough to commit brutal acts of total badassery. Two knives hang in the air in front of me, waiting to be grabbed before the level draws itself in. I’ve been here before because later sections keep killing me, so I reach out with both hands, grab the knives, and sweep my arms to the side without bothering to look. The familiar satisfying sounds of shattering glass kick in, red shards from the broken bad guys fly into my field of vision, and a black pyramid appears in the center of my vision. Staring at it for a second causes the pyramid to grow slightly, triggering the next level’s start. Total elapsed time- 4 seconds.

Another level also opens with knives but, seeing as it’s midway into the string of levels that make up a section, it starts right in on the action. There are four enemies to deal with, with the goon wielding a knife within reach.  I punch the first one, grab his knife, and throw it at the second enemy.  There are two other knives nearby so, while enemy number two is falling apart, I grab them both.  The second enemy is on a balcony to the left and I toss another knife his way, but my track record for the longer throw isn’t quite so good. Practice makes perfect, though, and he breaks into pieces as the knife connects, but both he and the third enemy have had time to opened fire.  I use the last knife to slice the second enemy’s bullet from the air,  then duck enemy #3’s shots to reach for the gun the first dead goon dropped. A well-placed bullet or two and the area is cleared of anything living except me. 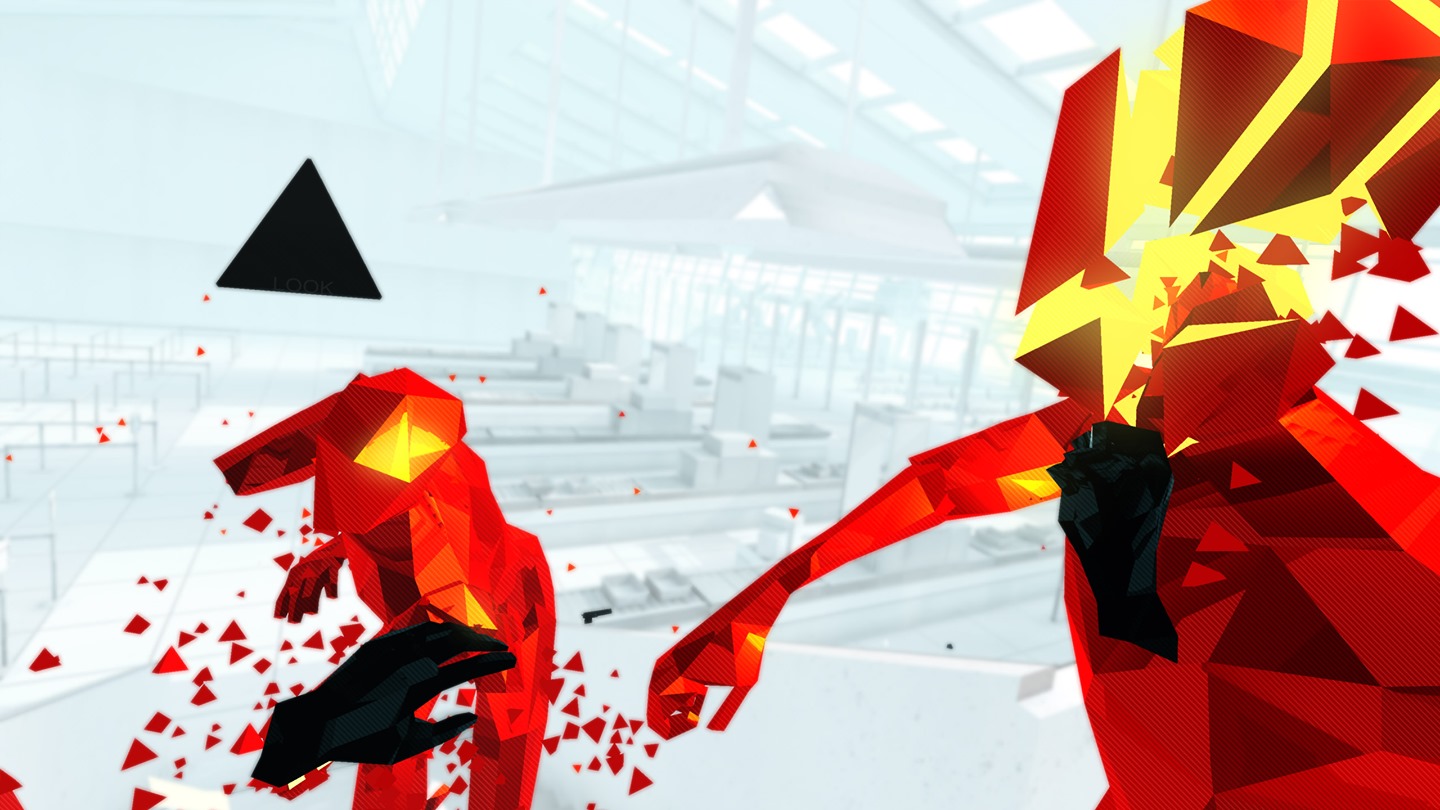 Every level is its own unique scene and starts with a few weapons within easy reach.  One level might only have a single ashtray to fling at an enemy, causing him to drop his weapon on death so you can grab it out of the air and return fire, but you know there’s major trouble ahead when an area opens up with a couple of pistols, an uzi, and a shotgun or two within arm’s reach.  It will all work out fine if you follow the classic shooter advice of “Don’t be where the bullets are”, but  even when you’ve got all the time in the world to scope out and react to the situation that’s not as easy as it sounds.  The bad guys are very good at flanking tactics, and it’s far too easy to focus on one enemy only to hear the familiar shattering sound of your own defeat by a bullet you weren’t paying attention to.  Death is quick and easy, and like the red crystal bad guys you go down with a single hit.

This makes SuperHot VR just about as perfect an arcade game as you could hope to play.  Everything is under your control if you can just figure out the best way to make what you want happen, and the first time or two in a level is practice for clearing it in style.  The fact that movement is basically 1:1 with your real hands leaves an incredible amount of room for variation, and only rarely will a level play out the same way twice.  The game also rewards replaying by revealing its environmental storytelling, where what may have seemed a string of individual scenarios in similar environments becomes more clearly linked as you go.  A good example would be the dance club level, where you start off unarmed by the pole on stage, survive gunfire long enough to make the next section, and it turns out it’s the same room from a different angle and you’re taking down the enemies who were shooting you.  The next section has you behind the pool table you could see from the stage, grabbing the balls off the table and chucking them at enemies armed with submachine guns.  There are brief moments when you’re not death incarnate but they’re few and far between, and as you learn each section a little more new techniques and opportunities to be awesome become apparent. 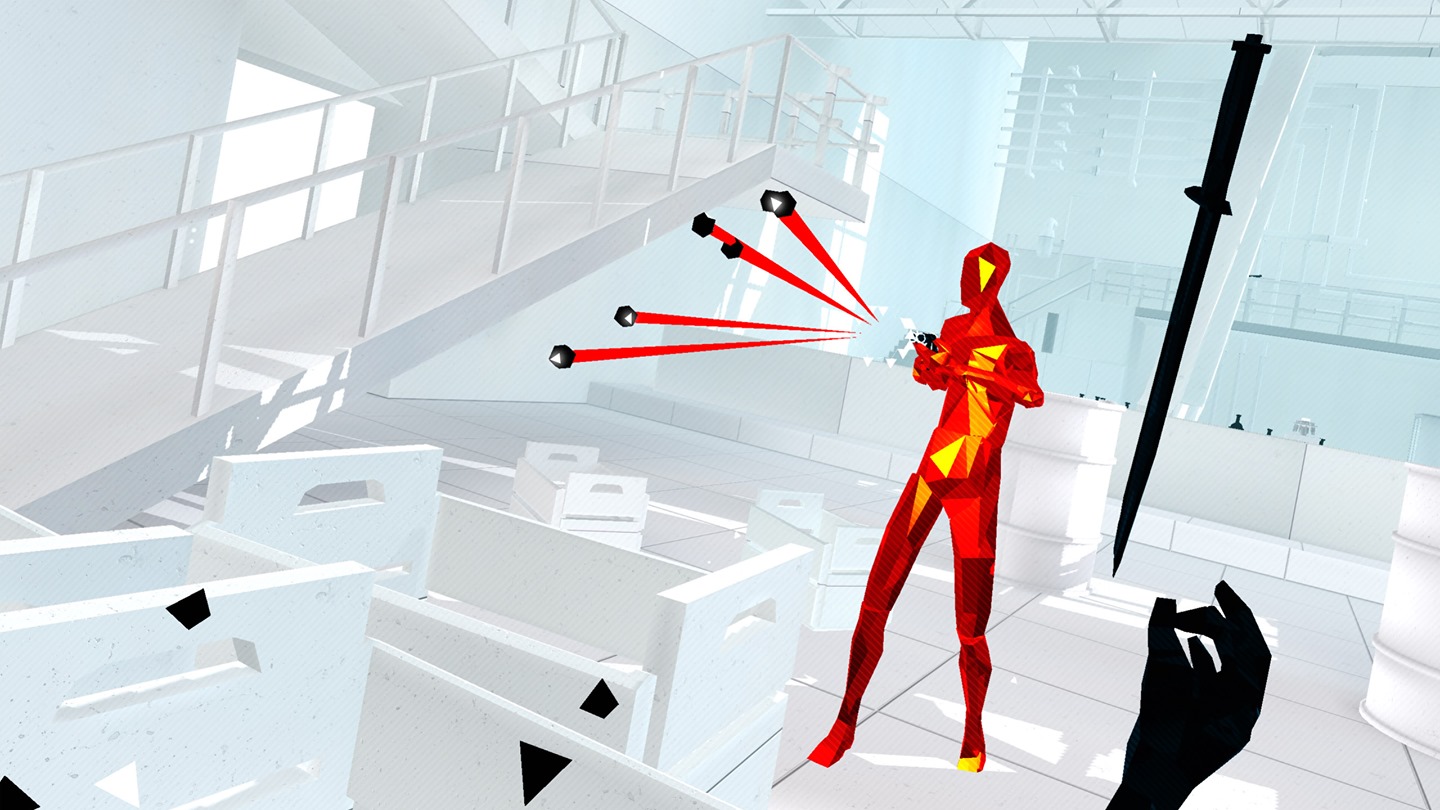 SuperHot VR is one of the best games VR has seen yet.  It’s a little bit short and on rare occasions the AI goes a bit loopy, but during the 99% of the time when everything is trying to kill you, it’s an incredible rush.  The change from pointing a mouse cursor to picking up the weapons and shooting, throwing or swinging them feels amazing, and also allows you to meter out time to the pace of your actions.  Nailing precision shots, or making a lucky throw, is far more rewarding when you’re performing the action rather than pressing a button, and I’ve missed by a hair often enough that it always feels like the game is going by skill rather than trying to be helpful with auto-aim.  You are the killer in SuperHot VR, performing all the actions and orchestrating each encounter, and when it’s all over and there’s nothing left but the shattered red crystal remains of your former enemies, then it’s time to do it all again, but better.  SuperHot VR is deadly and stylish, and one of the best games yet to show off what VR can do.