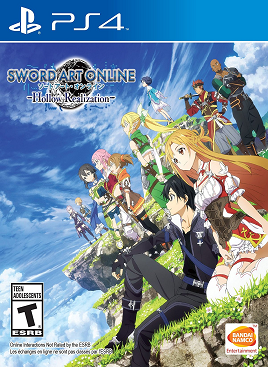 Either Kirito and friends are addicts or they are dumb. Trapped in the original Sword Art Online, by virtue of the immersive technology known as Nerve Gear, they were forced to fight and clear the game without dying. The same technological wonders that allowed the user to experience the full dive of all five senses also granted the malevolent game creator the ability to booby trap everyone’s rig. Dying in the game meant dying for real. In the Bandai Namco’s video game adaptation, as seen in Hollow Fragment, clearing the entire game is exactly what they did, with Kirito clearing the 100th floor, allowing the survivors to escape. The following game entry, Lost Song, saw the characters playing around in the fairy-flavored world of Alfheim. Donning the equipment for a different experience was foolhardy enough, but now the group has decided to move back to the original game, a reboot known as Sword Art: Origins. This does get explained away as being in the name of “research.” I would call it “cause for massive and immediate intervention.” It works out for fans, though, as Kirito and Company’s adventures found in Sword Art Online -Hollow Realization- are actually pretty darn fun.

Not everything is the same, though. The original game has been reworked for the players in new ways, with the resulting world being dubbed “Ainground.” Here, players can explore, take on quests, find crafting materials, hang out, or work on becoming a stronger, more efficient monster killing machines. When doing exactly this, Kirito comes across a glitched AI. Instead of posting a video of the phenomenon on YouTube under the heading “LOL Whut!”, he proceeds to investigate, dragging his friends along to discover what, exactly, is happening with it and in this new world.

To make one thing clear, this is an absolutely dense game. Any Sword Art Online fan wondering if this title offers bang for the buck can be assured that it does. With gusto. While Aquria reused plenty of assets from previous titles, it was done in service of aiding the long, and well developed narrative. So, anyone looking for story will certainly have that desire fulfilled. There is a bit of a caveat, though. As with previous titles, Hollow Realization relies heavily on talking heads for dialogue, with very little in the way of animation during the story vignettes. Everything is voiced, in Japanese, including stuff for minor story based subquests, but the lack of more animation, or at least fresh stills beyond character portraits, will be disappointed. This lack does not affect my enjoyment of the game or story, but others might not be so forgiving. While it is a flaw carried over from the previous games, the more interesting story at least mitigates some of the damage. 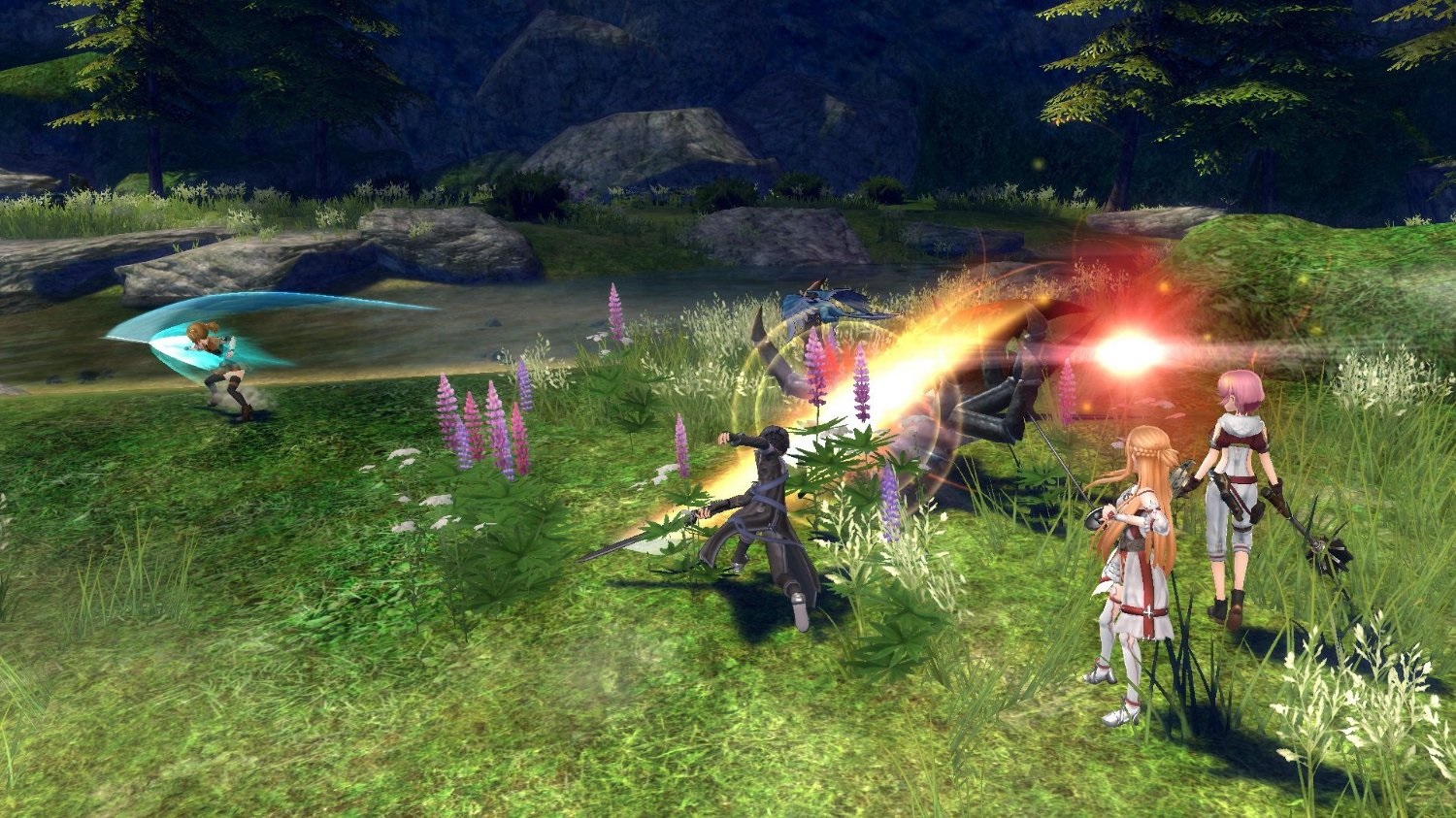 Another major component of Sword Art Online game has to be the combat. If this isn’t done well, then the title will fail at capturing the magic of the novels, anime, and books. Fortunately, the tweaks and tuning that Aquria has done with Hollow Realization managed to nail it. Attacks must be well timed to maximize damage. Button mashing does work, but not to the same level of efficiency. Building combos adds a damage bonus, allowing for battles to start off tough, but slowly swing to the player’s side through smart use of the systems. Players can utilize the “switch” system, where Kirito can start up a combo, only to jump back, allowing a teammate to finish it off for increased destruction. There are systems for stun, timing use of team skills, dodge and parry, and more to maximize battlefield dominance. It may take some time for players to learn to truly utilize everything in place, but all of the parts do coalesce into a strong and entertaining whole. Making use of these systems is paramount to survival. Especially early on, it is possible to stumble across an enemy that is well and truly over leveled for the player’s party. This is by design. The tools are there to succeed in the worst circumstances, and failure to do so isn’t exactly rewarded. Paying attention and smart play lowers the difficulty curve significantly.

Hollow Realization does a fantastic job of capturing the MMO motif, bringing in touches that makes this feel like a heavily populated genre entry while skipping some of the tedious travel time. There is none of the grabbing an automated bird to fly to a different realm, and using that time to make a sandwich, use the restroom, and fix the shingles on the roof like a true MMO. Instead, teleportation and smart map design keeps the travelling tedium to a minimum. Other nods to the genre include a dialogue box in the lower left corner of the screen, that constantly updates with damage given and received, and an extensive quest system. These “quests” differ from story events in that the player can take a pile of them, and fulfill them through natural play. Most aren’t exactly deep, being of the “kill X amount of creatures” or the “bring me X amount of bottled fairy farts” variety, but credit has to be given: these are typical MMO quests boiled down.

One other really interesting facet of this title comes in the form of relationship building. Sure, in the anime, Kirito and Asuna are romantically intertwined. Here, not so much. The player can really get their PG rated freak on. Most of the inhabitants of this world can be taken on dates, exploring the beginner’s town together, eating some chow, etc. During these, yes or no questions will be asked that the player can answer, building the link between the two. If things are going well, players can make a daring move from holding hands up to a kiss. This isn’t relegated to heterosexual sexy times, so anyone interested in exploring their inner Zevran from Dragon Age: Orgins is welcome to do so. (Monogamy works too, for you weirdos out there.) This system does quite a bit to add to the MMO feel of the game, as in true multiplayer RPGs, making friends and so on goes a long way to success. It’s a neat feature, and one that should be in more games. 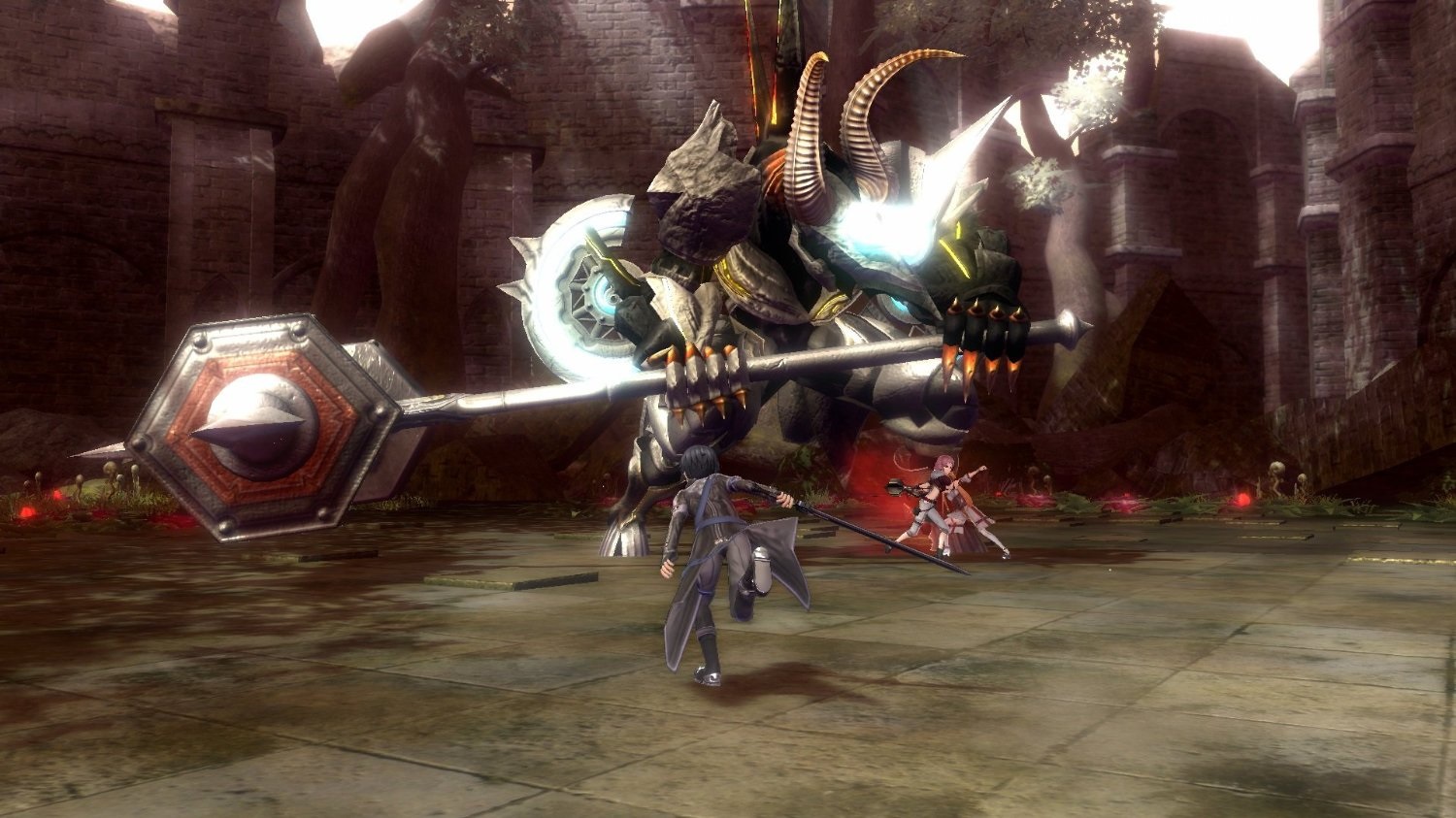 It’s possible to argue that the release of Sword Art Online -Hollow Realization- is a bit much. After all, Lost Song came out relatively recently and reuse of assets gives off the stink of a rush job, something to put out on the market while the series is still popular. This perspective ignores how much work went into the title from so many other angles. The updated, and finely tuned combat, keeps the action exciting while the story gives fans of the series a way to spend more time with their favorite characters while not rehashing the established history. Indeed, the game version’s biggest strength lies in the fact that the lore has been radically changed. This is simply a must play for Sword Art Online fans. For those interested in the world and action, the narrative does a decent enough job introducing returning characters, with the option to skip the reintroduction for returning players, allowing Hollow Realization to serve as a perfectly fine entry point into the series. Overall, this is easily the best Sword Art Online game yet. Hopefully, the trend will continue into the future.