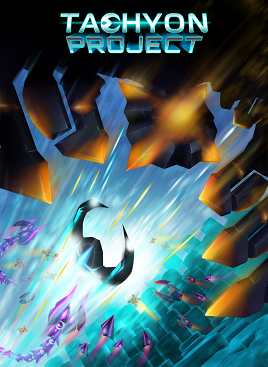 For the few of you who have not played it, Geometry Wars: Retro Evolved was an evolution of the old-school twin stick shooter style of arcade game. The basic mode required players to move deftly round the large board, shooting down swarms of abstract shapes as quick as humanly possible. Each of these shapes had their own patterns and personalities, requiring a specific strategy to avoid. As it ramped up, more and more enemies would fill the screen, requiring the player to act fast and remove all thought. Score is, of course, earned through shooting down the enemies. Each enemy leaves behind various amounts of gems that can be picked up to increase the score multiplier. Topping the leaderboards becomes the primary thrust of the game and a damn addictive one at that. Later iterations added more modes that extrapolated from this basic formula. It’s pure arcade bliss and any version is highly recommended.

It is not overly reductive to state that Tachyon Project is Geometry Wars with a story. While there are a few differences, which will be covered later, this title would not exist without the former. The look is similar, the sound is similar, and the vast majority of enemies behave the same exact way. Even the music makes use of the same note progressions found in the obvious inspiration. That is not to say that this is a bad title. It is just very derivative.

Players take control of Ada, a sentient computer program designed to “hack” computer networks. The hacking that occurs is done via shooting the malevolent protector programs in the target area. After a successful test run, the Ada program was making her way back to her coder parents. Unfortunately, this seems to lead the fuzz right to them. In an act of desperation, her creators set her free in the network. Now she is on a journey to find out what happened and reunite with them. The tale itself is rather short, taking place across ten stages, each with multiple waves. Thankfully, the thrust of a title like this is not in the narrative, but in working to obtain a higher and higher score. 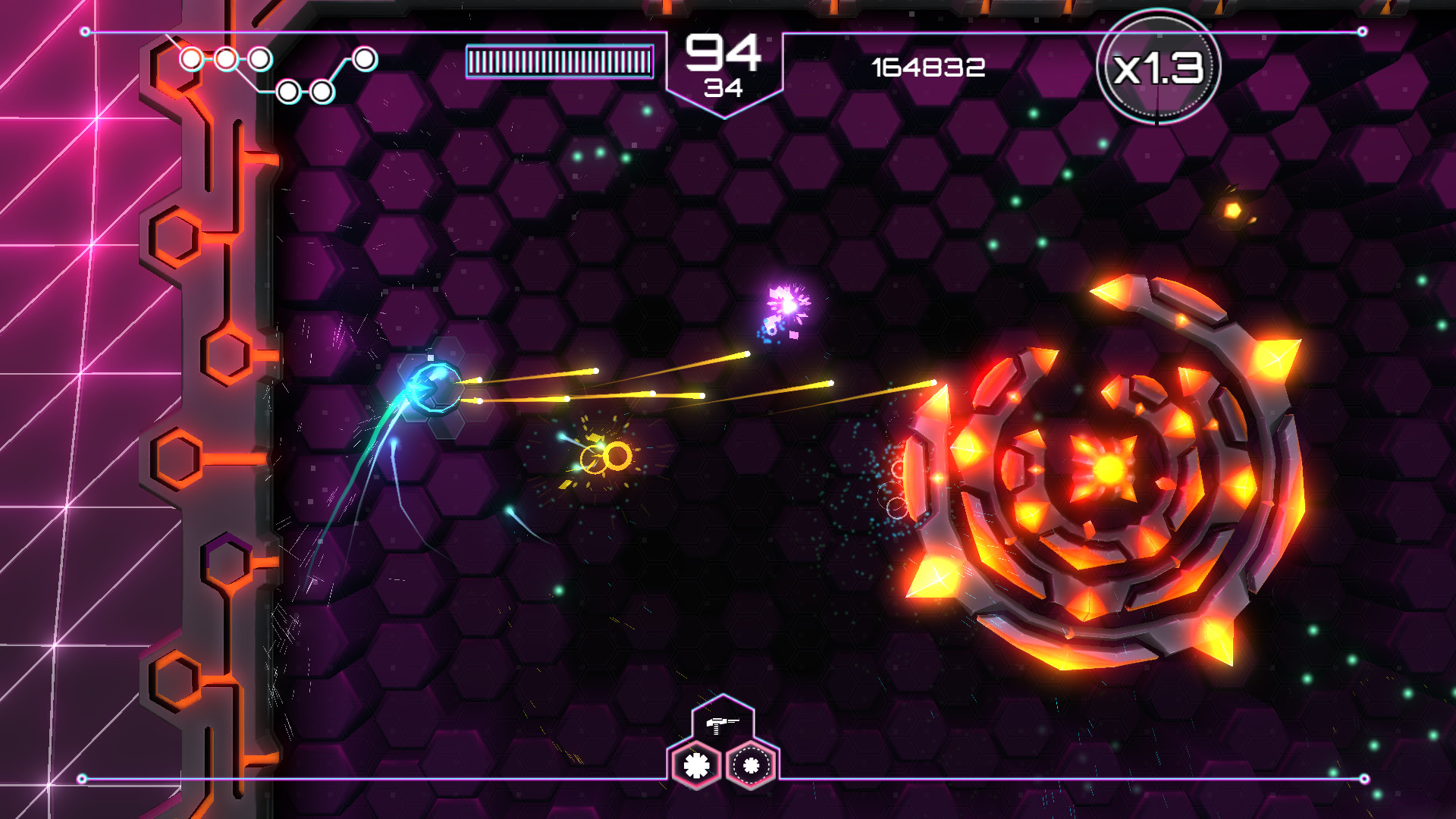 Earning the score is flipped when compared to its inspiration. Here, the score multiplier increases by gunning down the enemies, and the actual points are racked up by picking up the gems. This does make for an interesting change, as players working to beat a friend’s record can no longer get by leading the enemies around in a train, only snagging the gems when convenient. Instead, they must dive right into the mess. The safe option will pass the level, but it won’t woo the ladies. (Is that how romance works now? I lost track.)

Another difference lies in the customization options for Ada. Through reaching various milestones, new primary and secondary weapons, as well as perks, can be unlocked and equipped. The primary weapons range from slower spread weapons, machine guns, and even homing missiles. The secondary weapons, of which two can be equipped, consist of things like freeze bombs, turrets, and decoys. The turret itself was pretty useful, though it’s possible that I have a mild case of “Turrets Syndrome.” (Sorry. No, I’m not.) 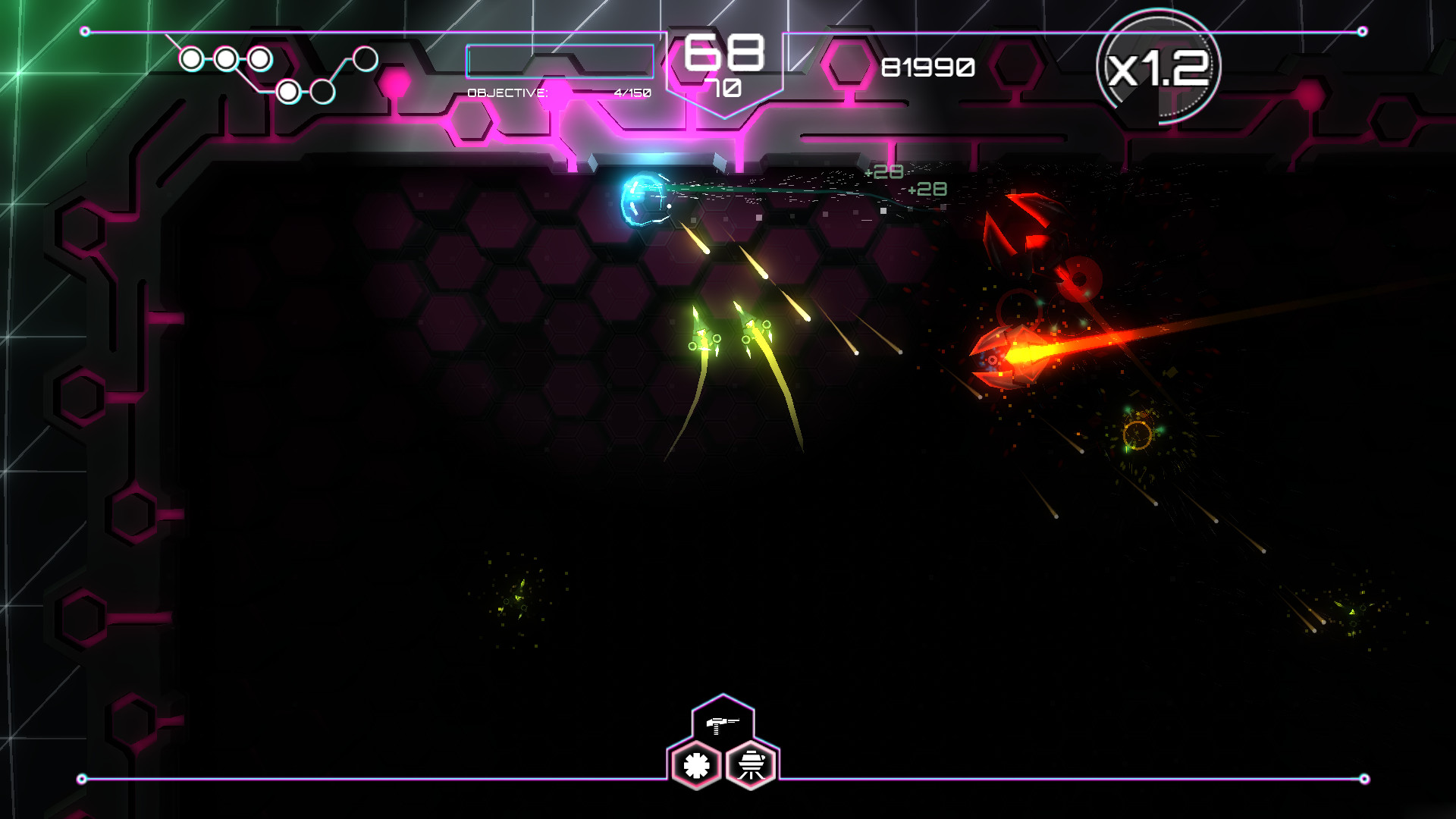 The enemies that Eclipse Games adds to the expected Geometry Wars mix also change up the gameplay a bit. Sure, the vortex and various speed follower mobs are present. They also added things like time bombs, spiked mines, and a shield type that can only be taken down from behind. The time bombs, in particular, lend a bit of strategy to the experience. They can be removed from play by shooting them. When they blow, though, they can also take out other enemies. Leading an overwhelming swarm past at the right moment can open up space to maneuver, and just feels satisfying. There are even a couple of properly obnoxious bosses for good measure.

Eclipse also added stealth mechanics to the proceedings. This part fell a bit flat. By not shooting, and hiding around the level, it is possible to avoid the hordes. The one thing that never really became clear is “why.” This is an arcade shooter that just isn’t up for these types of mechanics. It is easy to dismiss this confusing feature as its use is not required.

Finally, there is a life mechanic here that’s based around time. Getting hit reduces the clock while running clean and gunning down the programs adds more time. Some may like this feature, but the “one hit=one life” system used in other titles is preferable. It’s not as though this game is a cake walk, but it is possible to cheese this system, rendering tough waves a joke. 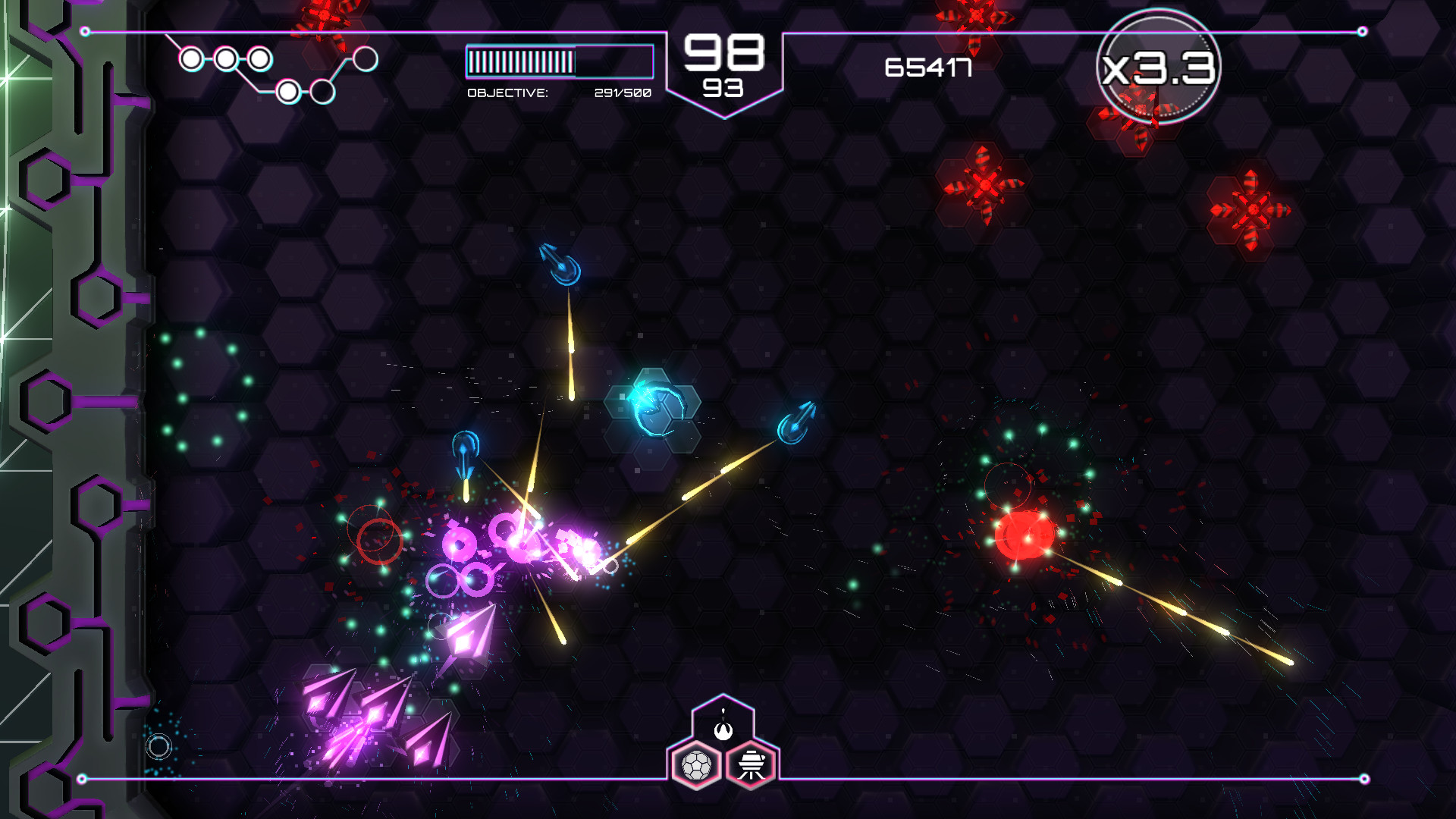 Describing Tachyon Project as derivative is not intended to be dismissive. It manages to be what it sets out to be: fun. The joy of working up the leaderboard ranks is present and managing to surmount a particularly nasty swarm of baddies feels great. Eclipse Games picked a good target to copy and pulled it off with gusto. For the neophyte looking to get into this type of game, however, Geometry Wars 3: Dimensions is a better package overall. That one includes the basic version along with a host of different modes. Tachyon Project is for the people who have played that to death and want something else along the same lines.