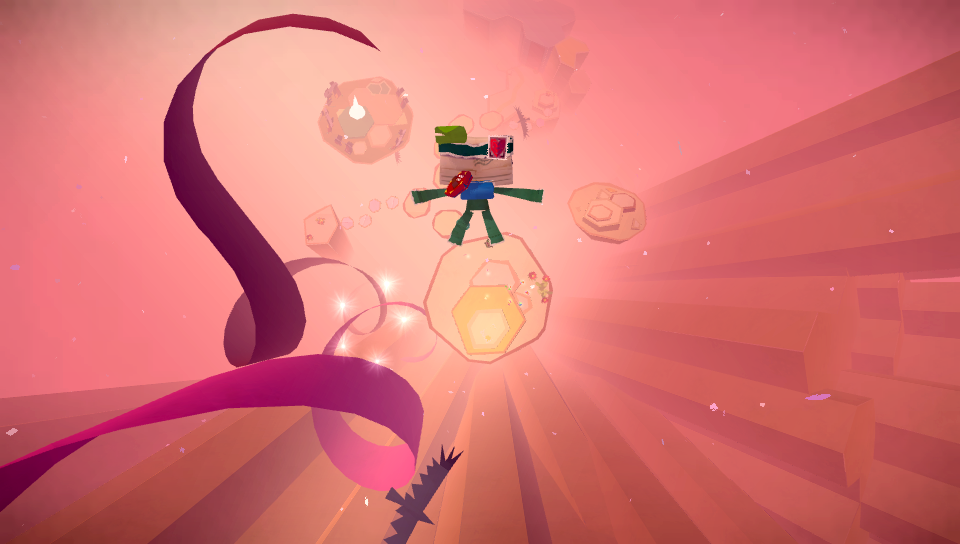 Following the success of the LittleBigPlanet series, Media Molecule is back with their new title, Tearaway. With the same sense of whimsy and unique approach, it quickly became one of the Vita’s most anticipated titles. Gven the Vita’s track record, however, will Tearaway be another Soul Sacrifice or will it suffer the same fate as Resistance Burning Skies?

Tearaway begins with two narrators trying to tell a story, which also serves as an introduction to the game. After they finish talking, you have to answer a few questions. These include gender, finger size and skin tone and are used to make the experience more personal. So if you’re a dark skinned, large fingered woman, the game will show a bigger finger with a darker pigmentation and longer nails. You’re also free to change your settings at any time, so your choice doesn’t really matter. After that you need to select your messenger, Atoi or Iota, though the only difference is their appearance. Once all these things are in order, you can finally begin your adventure. 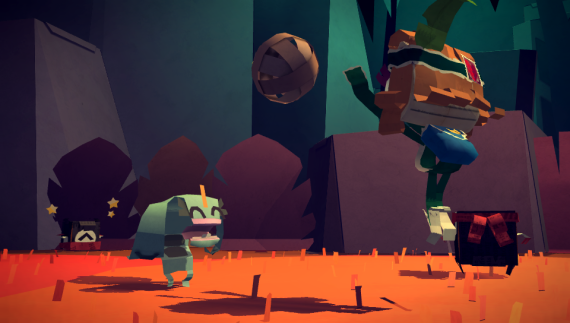 The first couple of levels are glorified tutorials, which cover the various elements of the game. The first one explains touch controls and customization, where as the following level gives you a camera (to capture your awesome adventure) and the power to jump. Over time you’ll gain some other abilities, such as rolling, though they come later in the game. Once you make it to the real game, Tearaway starts to really shine.

Much like their previous titles, Tearaway is a beautiful game that is an absolute delight to play. Every level is filled with color and creativity, which makes it stand out next to other platformers. However, the attention to detail is what makes this game amazing.

You’ll be asked to create items at various points in the story. One of these items is a crown, which you’re given full control over. So, you can start by selecting one of the seven basic (red, blue, yellow, etc) colors and use the pencil to draw your shape. I personally drew the standard pointy crown, though your the limit is creativity and skill. Since a king’s crown has jewels, you can further customize it by using your remaining sheets of paper to make the best crown ever. Once you’re satisfied with your creation and you get the angle/proportions right, that character will always have the crown you made them, unless you decide to remake it. This is also true for the other story quests, so you have a lot of control over this world. You can also customize your Messenger with these items or use the same tools to make your own. There is also the option to buy customization items and you can freely edit the angle/size by using various touch commands (like pinching to shrink). 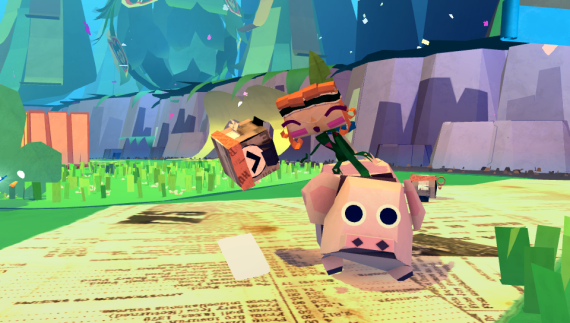 While Tearaway takes a step forward in creation, it’s a massive step backwards in every other aspect. For starters, Tearaway is a painfully short game. There are a total of 16 stages, though the first one is little more than a tutorial, the harbor is basically a routing location (can also be finished in a minute if you ignore everything), the stage before last is just a long walk (it’s not even possible to die) and the final stage is just the Messengers message (no gameplay) and credits. This means you’re looking at about 12 levels to play though and that simply isn’t a lot of content. Much like LittleBigPlanet, there are various collectibles to obtain, but even this isn’t as good.

If you’ve played LittleBigPlanet, then you no doubt know about prize bubbles. For those that don’t, prize bubbles give you stickers, costumes or items, which you can use on your character or in your levels. This customization aspect still exists, though as I mentioned before, are now unlocked via confetti (cash). Now, there are four main ways of getting confetti: dispatching enemies, finding presents, picking it up or through side missions. Every source is a one-time thing, so if you dispatch every Scrap, then you will never get more cash from them. In addition to that, I believe every item is available for purchase at the start of the game, so there is no reason to wait for a better item. This will render the cash pointless at some point, though you will need some for trophies and doing certain side missions. 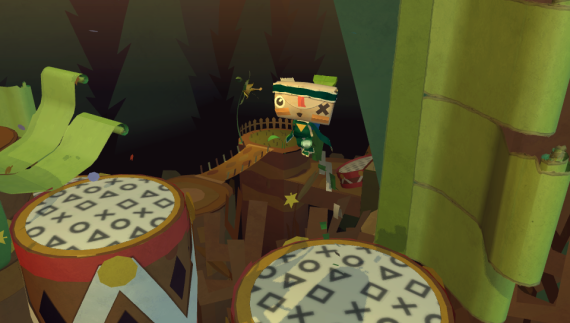 Speaking of side missions, they’re not too impressive. There are about 24 total and they range from things like making three baskets (basketball) to completing a jumping trial. None of these missions are practically long (a few minutes tops) and some of them are downright pointless. To give you an idea, one side mission requires you to give a person a tie. This is done by opening the customization menu and buying the tie with confetti and then finally putting it on this guy. The only challenge here is telling the tie apart from other items. Another mission requires you to wear a skull and cross bones, which is done by opening the customization menu and putting them on, though I don’t think you even need to make the shape.

Thankfully, Tearaway does have one really cool collectible, papercraft. Across the world of Tearaway, there will be items that are completely white. To return color to them, you must snap a picture, which will unlock that item as a papercraft. What makes these collectibles cool is that you can go on the Tearaway website and download these creations and bring Tearaway into this world.  Everyone is given a unique ID and this link can be shared with others. Unfortunately, this might kill your motivation to find them all, but these are the most challenging and rewarding things to find. These are also the only items that require backtracking (not much) to complete.

Tearaway is the perfect launch title, though it missed the launch by two years. Just about every Vita feature is fully utilized and combined they offer a unique and engaging adventure. Unfortunately, the adventure is quite short and the replayablity isn’t there. Once you finish the game and find all the collectibles, the only choices are to start over or move onto the next game. This isn’t to say you shouldn’t experience Tearaway, but you might want to wait until it drops in price to do it.