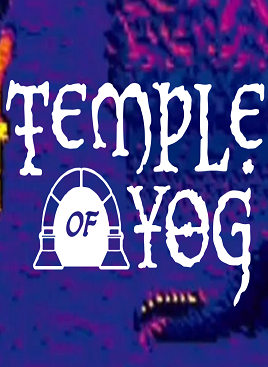 While traveling through the wilderness, a group of adventurers stumble upon a mysterious artifice with a glowing portal at the top. Being stalwart proponents of recklessness and staunch adversaries of sense, they all wish to enter the swirling purple vortex. Their leader steps up and shuts them all down. He shall be the first to venture through. So he does. And he dies. The remaining group figure that establishing a village nearby will work. And so life goes on. The village comes to learn that this temple will support them and help them advance technologically in exchange for tributes. As there did not seem to be any females in the initial group, the villages inhabitants must be able to reproduce asexually. Since fresh bodies are not an issue, the villagers figure that this is a keen idea.

This is the setup for ChudChud’s Wii U exclusive indie game, Temple of Yog. As far as plots go, it’s not a terrible way to announce to the world that they will be taking hefty hunks from exemplary Rogue Legacy and making it their own. The gameplay cycle apes this forebear with aplomb, but taking it into the twin-stick shooter realm. The player takes a fresh adventurer into battle and proceeds to attempt to progress as far as possible and earn currency. When death inevitably occurs, the player is sent back to the village to use said currency to upgrade stats. While this cycle is absolutely one that should be used more, ChudChud doesn’t quite hit the mark here. There seem to only be three stats available to upgrade across the four classes: health amount, special ability time, and the amount of time the player can spend in the “shadow world.” This last is the other interesting mechanic that Temple of Yog brings. When traversing the procedurally generated dungeons, the player may come across a dead end or find that the gate to the next floor is unreachable. By holding down a trigger, the player enters the shadow world, with its different layout. This time is limited. Fortunately, the power regenerates quickly.

When stating that there are only three stats to upgrade, it should be noted that it is possible further upgrades become available as the village progresses. Unfortunately, there are myriad issues that make progress akin to pulping one’s head against the proverbial brick wall. Admittedly, assuming infinite conscientious, it might be possible to soak the brick with enough blood and brain matter and bit of skull to soften it and break through, but that’s a ridiculous amount of effort when other walls are more enticing and do not feature woefully under-powered characters. 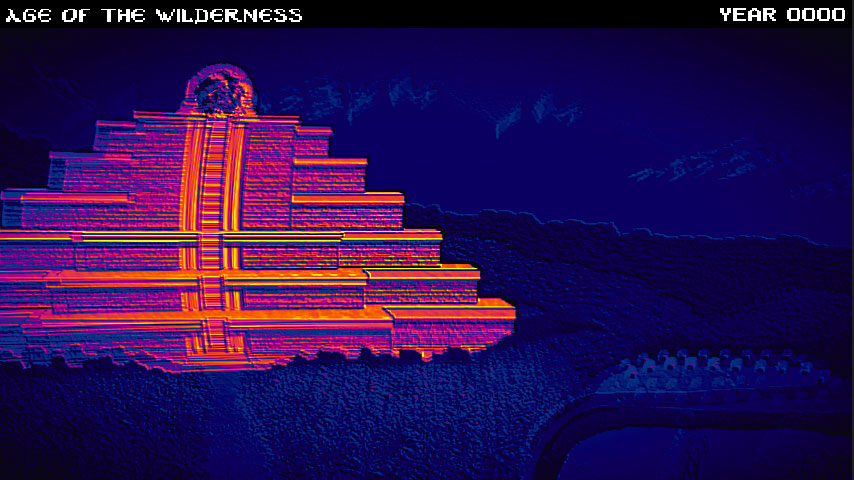 First of all comes the character classes. They seem somewhat pointless. Each has a special ability that are all superfluous. The cleric can heal, the mage has a shield, the rogue can sprint, and the knight… turns red or something. Trying to decipher this final ability ate up quite a bit of time. Strangely, there is no manual to speak of. Pulling up the digital manual on the Wii U only yields the boilerplate legal stuff. These powers are a non-starter anyhow. Simply moving out of the way of attacks is easier and more reliable for the shield. Health gets devoured so quick that healing is pointless, and the dash tends to cause the rogue to attempt unspeakable acts with the flora and fauna.

There are also issues with the procedural dungeon generation. More times than could be counted, the hero spawned directly into the middle of a conflagration of giant spider spit, the added humiliation of a piranha plant amiably chewing his shin bones just being the topping. These are situations that cannot be saved even with advanced knowledge of the event and the reflexes of Neo. 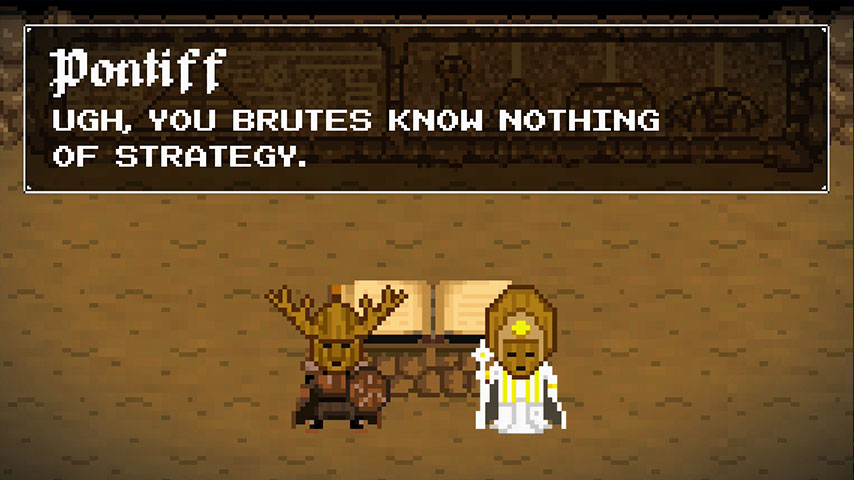 There are other times when the character will spawn right into a pod, unable to move. To escape, one would need to shift into the shadow world. The only issue there is that another enemy will be in the same spot, resulting in death. For the curious, the second time this occurred in two hours was my breaking point. As death is the way to progress, challenging scenarios, and failure is expected and part of the fun. Wagering the player’s time against the ability of the game to work properly is another.

It isn’t a complete failure, though. Despite the current overuse of the aesthetic, the 8-bit graphical style is pulled off well here. The heroes each have a classical look, and the mocking priests between each run are expressive. Especially cool is the distorted filter on the shadow world as it appears on the Wii U’s game pad screen. Massive props there. The game also features some pop culture references that manage to roll the dial over from terrible to amusing. (“Life, uh, finds a way, uh uh…to KILL YOU!”) Finally, the soundtrack, provided by Dr. Zilog, manages to be everything right with modern chiptunes. Toe tapping and engaging, the tunes here deserve to be in a better game. 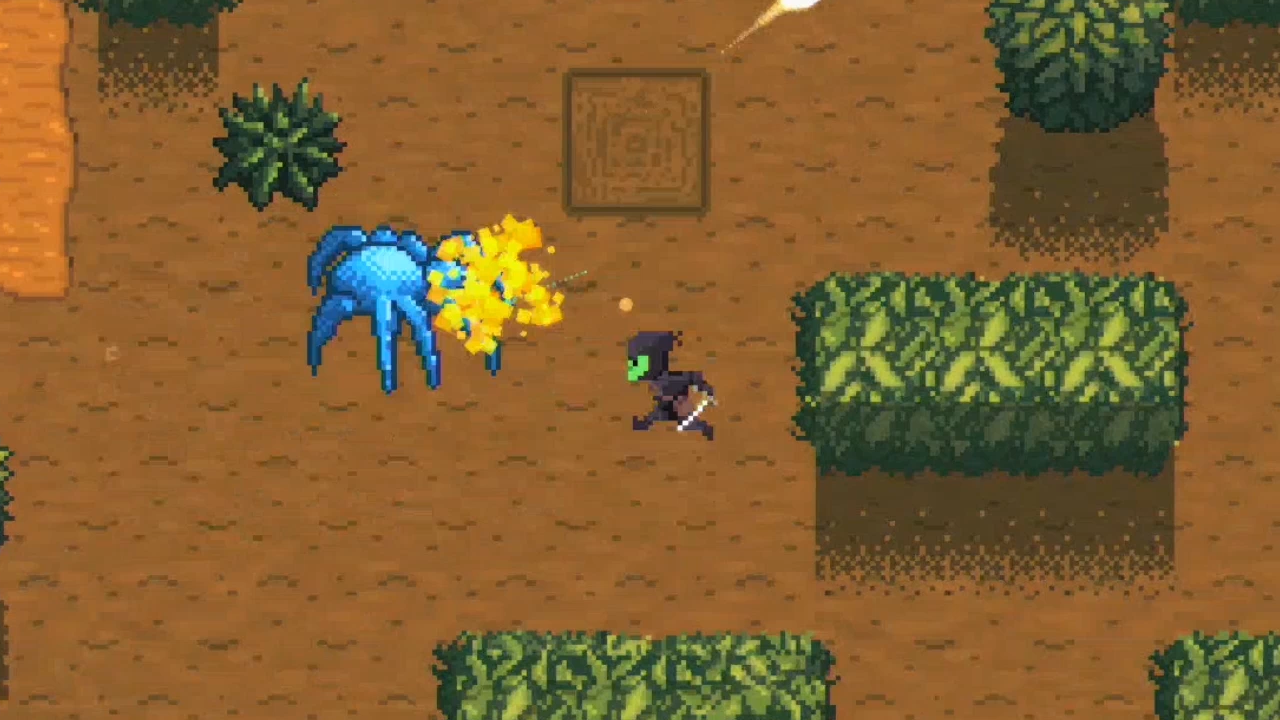 Temple of Yog is a title that would demo quite well; the first ten or so minutes revealed some fantastic possibilities. Actually trying to play the thing for any real length, however, becomes a chore of the highest order. The ideas are right and some of the features are cool. Pushing through and advancing the village to lofty heights should have kept me enraptured; that’s my jam. In the end, though, the execution takes these ideas and waterboards them with used enema solution. It’s just too much of a slog to take explore the Temple of Yog.