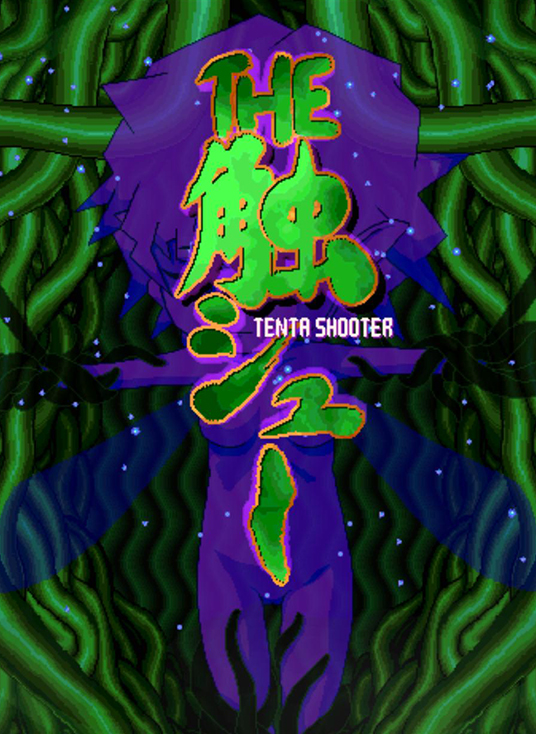 There’s not a whole lot of plot here other than the woodland sprite Kei’s sister Sei has disappeared, a mist has dropped over the woods, and Kei flies off to the rescue.  There’s monsters in the way, they fire lots of bullets in increasingly-dense patterns, and then after five levels it’s over with barely a hint of explanation as to what happened.  Seeing as for the life of me I couldn’t explain the plot any of Cave’s shooters much better this shouldn’t be viewed as a problem.  The important part is that there’s plenty of enemies and bullets to weave through, plus a good shooting mechanic to exploit.

Tenta Shooter is intentionally simple, using only two buttons for all its firing modes.  Tap the fire button for the normal spread of bullets or hold it down for an alt-fire mode that also slows down Kei for maneuvering in tight areas, or use the bullet-cancel button to negate all blue or red projectiles within a circular pattern.  Any bullets canceled get turned into homing shots, and when you’ve caught a good cluster of them it can wipe the screen clear of enemies while racking up a nice combo multiplier.  Once used the circle is gone until the counter refills, which it does naturally over time and also with the help of the oranges defeated enemies leave behind.  The trick is to use the counter in the densest swarm of firepower possible, which has a nice effect on the score and also leaves behind enough oranges to instantly refill the meter.  It encourages an offensive play style that’s a lot of fun when it works, and when it doesn’t you know the only person to blame for the miscalculation is the one holding the controller. 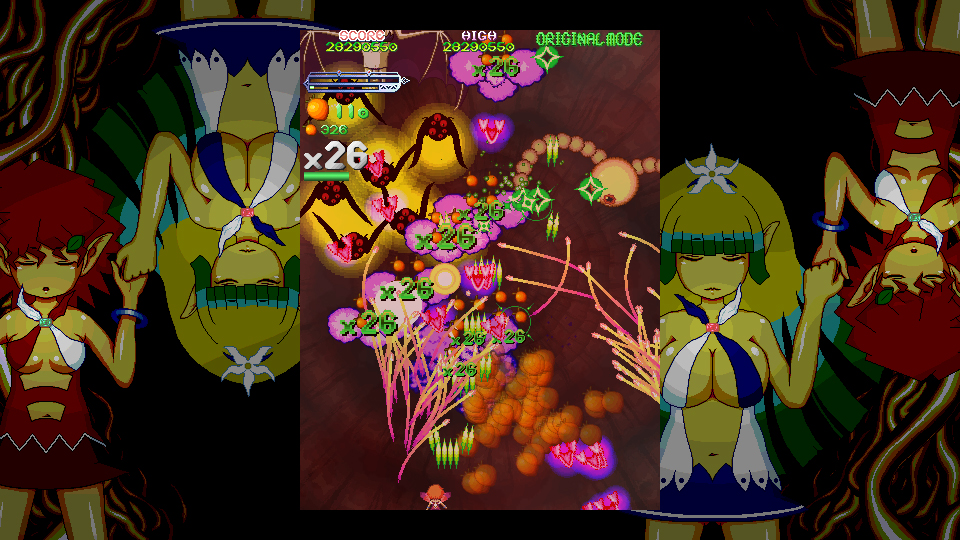 At game’s start there are two different shot types to choose from, but it doesn’t take much work to open up the third, which makes opening up the last form fairly easy.  The first two firing patterns are your standard wide spread and slightly less-wide spread, with differing speeds on reloading the bullet-cancel circle.  The fourth form has a comparatively-small straight-firing shot and it’s balanced with a relatively quick reload on the bullet cancel that also grants a short window of invulnerability.  The third firing form, however, is basically a Beat the Game Free card, with a strong straight-ahead shot and an insta-reload on the bullet cancel that, just in case clearing enemy shots at will isn’t powerful enough, also comes with the short invulnerability moment.  It’s maybe a hair overpowered, but does make unlocking things easier.

There are three different gameplay modes to choose, with two open at the start.  Arcade is the only version with a leaderboard, and the vanilla version of the game.  Dying Mode features a health bar that’s constantly taking damage, needing a regular infusion of oranges from defeated enemies and canceled bullets to knock back down to empty.  Shock Mode, however, is where you use the unlocks, which come in the form of cards earned for meeting certain goals.  Find all the hidden fairies on a level, earn a card.  Eat a number of small oranges, counter bullets, keep the combo alive, etc.  Each card comes in three versions, earned for doing better on each goal, and they control different aspects of Shock Mode such as shot power, player speed, enemy fire rate and more.  The ones that make the game easier should show up by normal gameplay, while those making it harder take effort to open up.  The cards illustrations, however, is where the laughable porn comes in.  Each card has a scene getting a bit ruder through the three versions, and while Tenta Shooter is uncensored, poor Kei is vagina-less despite having a perfectly decent anus.  The boss-art cards don’t fare much better, with details that are unintentionally funny once you’ve seen them.  And that’s not even taking into account the spider-boss with breasts on her lower abodomen. 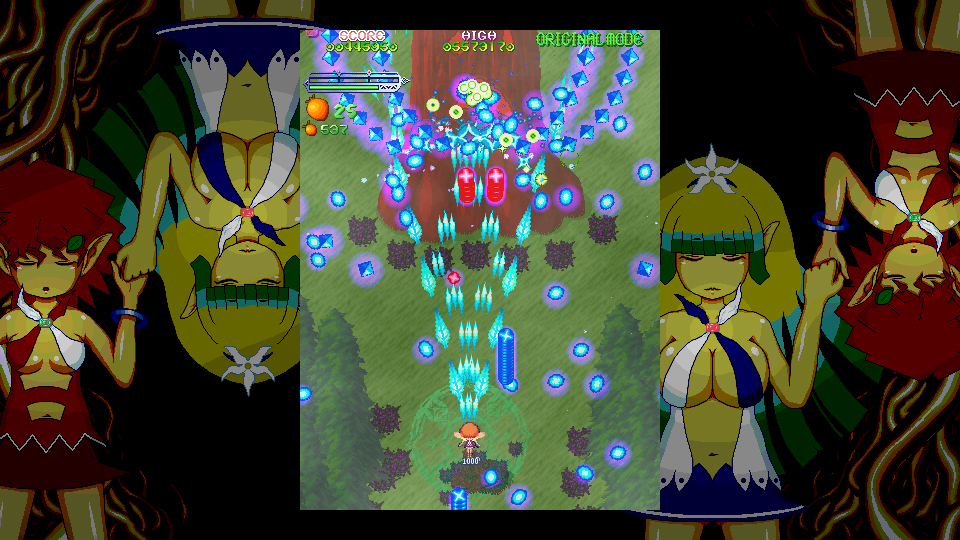 Tenta Shooter is a perfectly decent bullet-hell arcade game with a simple mechanic that provides nice flexibility in both score-chasing and surviving the levels.  While the bullet-canceling can get you through heavy onslaughts untouched with proper use, there are enemies with attacks it can’t counter so you still need to be careful.  Each level has secrets to chase after in the form of tentacle tokens, hidden in enemies that need to be defeated in a specific way to earn the drop and fairies tucked away in places even more obscure.  While nobody will be ranking Tenta Shooter with the best of the genre, it’s still a fun ride, with a good balance of skill, memorization and reflex needed to clear its challenges.  The porn aspect, though, just doesn’t work due to a combination of poor art and having nothing to do with the actual game, and Tenta Shooter would have been stronger without it.