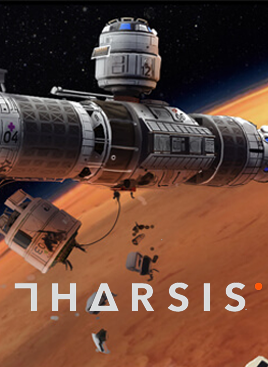 Tharsis is a turn-based strategy game set in the vastness of space. With a pervading board game feel, players must steer their ship and crew through a number of randomly generated events as they respond to a mysterious signal emanating from Mars.

Upon hitting the New Game button, Tharsis throws the player straight into the action.  A cutscene followed by a brief tutorial adequately introduces you to the fairly simple mechanics without giving much insight into potential strategies.  As the game releases you into independence, the UI fills with the randomly-generated resources allocated at the beginning of every run-through.  Made up of food, dice, and your ship’s health; these starting resources often define how the run will begin. Usually, it begins badly.  Then it progresses badly.  Finally, it ends badly. Everything goes bad, all of the time.  Seriously, you will die, your ship will be destroyed, and this all after you’ve been reduced to feeding you crew the remains of their friends.  Charming. In case that needs clarification, Tharsis is immediately brutally difficult. The entirety of the game is spent teetering on the edge of complete destruction until the inevitable failed dice roll dooms your crew into oblivion. Tharsis is hard. If you can’t handle failure, stop reading and move on to a different game.

Tharsis, like a lot of games, revels in its difficulty, however, unlike its contemporaries Tharsis’ gameplay relies on a huge amount of random luck.  The vast majority of its mechanics are constructed through the literal roll of the dice. While this can be exhilarating at times, usually it is simply the cause of frustration. As with all dice, the ones in Tharsis are completely evil, usually amounting to the exact roll the player does not want. Obviously, this is just down to luck, but therein lays a large part of the problem we had with Tharsis.  It feels too far out of player control.  Yes, strategies can be developed, resources can be hoarded but ultimately these strategies only slightly improve your chances for being successful.  Especially when the availability of resources and the implementation of these strategies can be utterly negated by one bad roll. 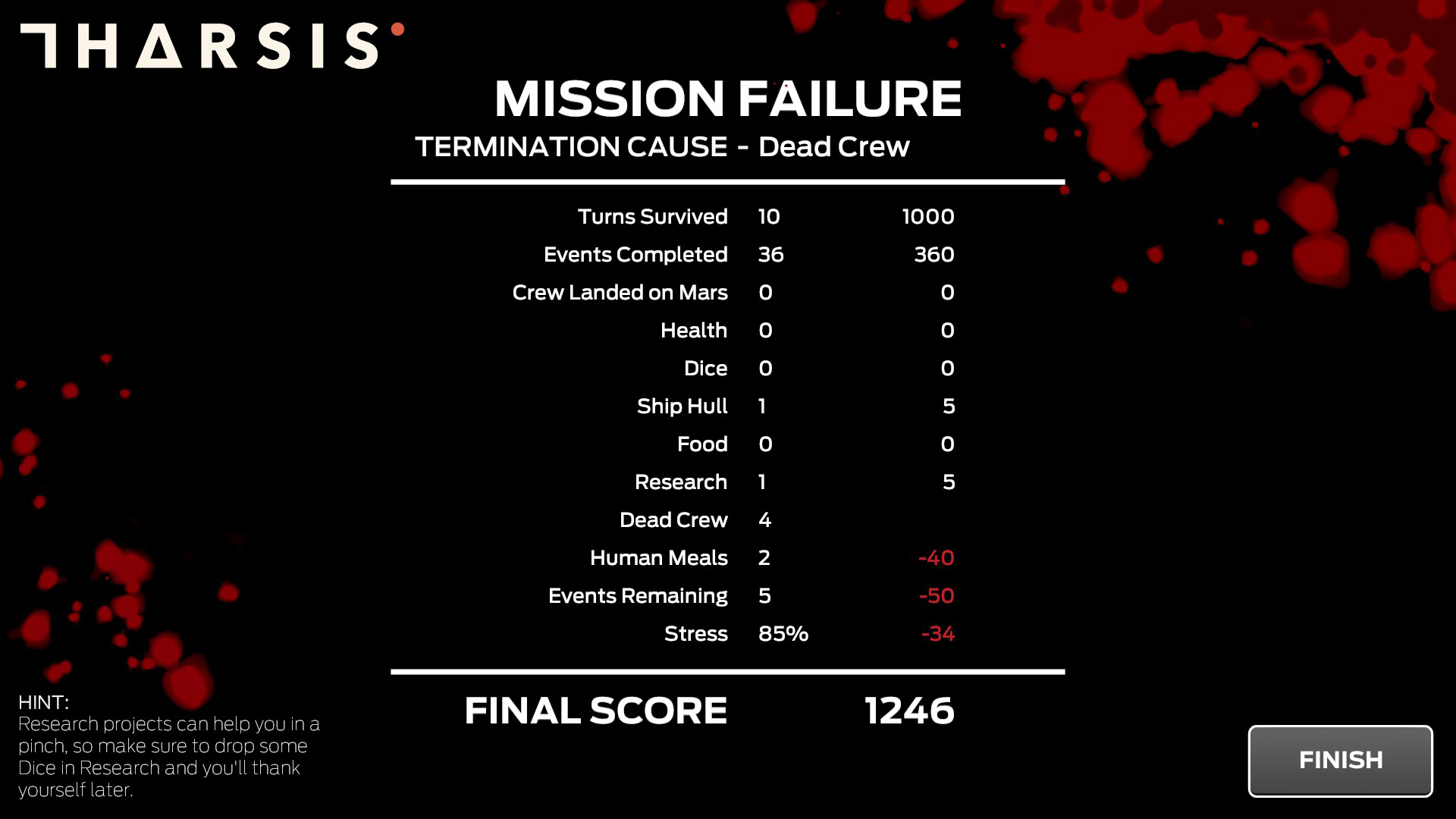 This negates the satisfaction of improving that other difficult skill based games can offer. In each of our best runs, we never felt that winning was completely down to our actions.  It felt almost entirely down to the lucky dice rolls. While our general lack of incompetence helped, it never felt like the defining factor of our success. Of the runs we made —which were many— we completed the game once and reached the final round three times (one of these was failed due to a miscalculation). These attempts were amidst countless others that consisted of one error or failure inducing a snowball effect that quickly causes a game over scenario. 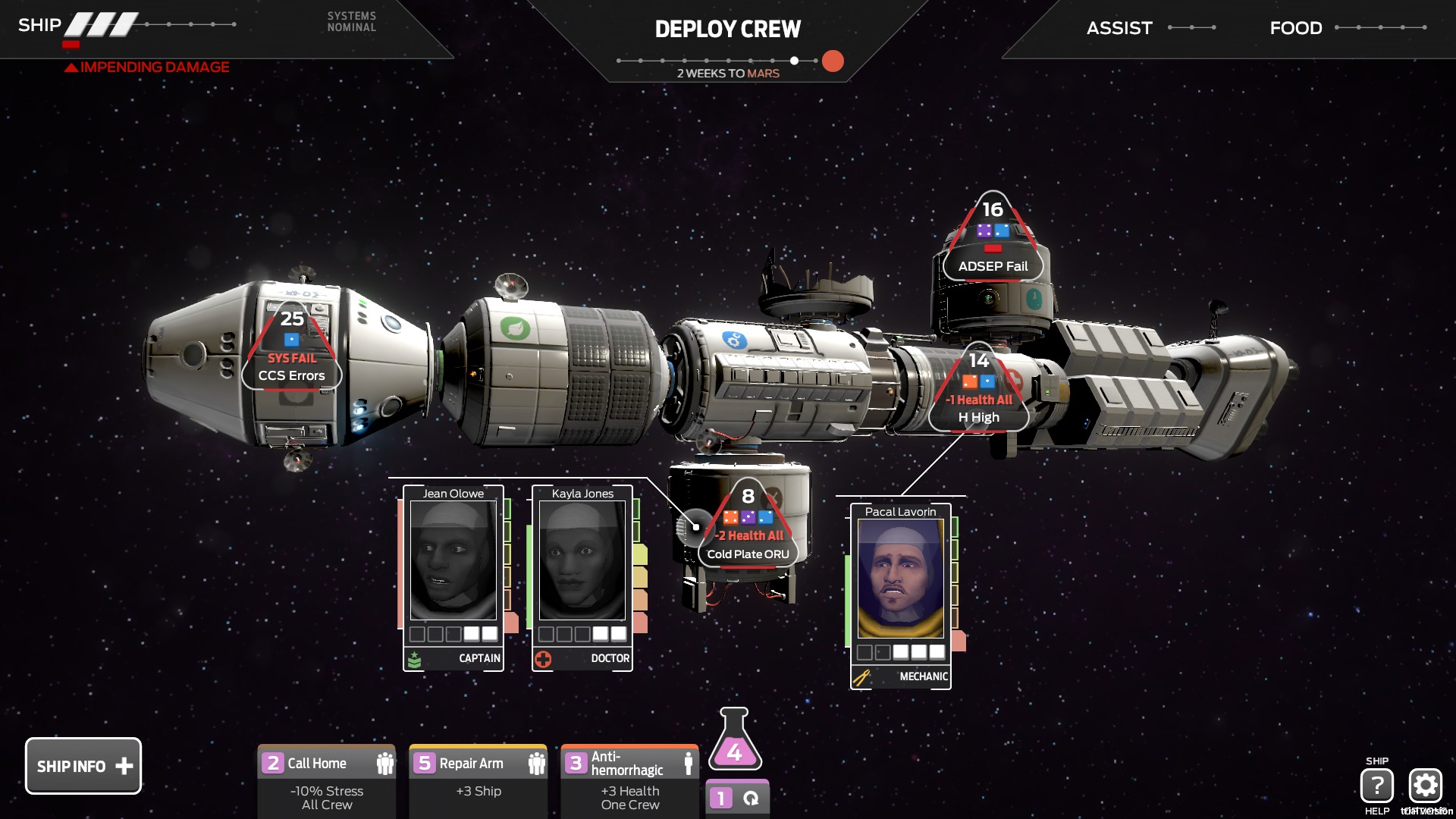 Tharsis offers a similar pattern of play to the hugely popular FTL: Faster Than Light.  There are a set number of rounds that must be completed in order to complete the objective.  Unlike FTL, Tharsis does not offer any choice as to what these rounds might consist of with the flight path being identical on each run.  While the path doesn’t differ, the problems that occur along the way do change.  Randomly determined events will be thrown at the player at the beginning of each round. These events affect various aspects of your resources, whether it be damage to the ship’s overall health, the health of the crew, the ability to use a certain part of the ship, or the number of dice at your disposal.  These events have countless different names and appearances; however, their variation ultimately boils down to different numerical values that the player must counter with the accumulated value of dice rolls and the crews various bonuses and abilities. Apart from this value, the different events only differ in name and appearance.  As a difficult game, Tharsis is such that players can expect to restart their campaigns dozens of times. This is all well and good but the lack of variation in the player’s journey can become disillusioning. After seeing —and skipping— the same cutscenes for the umpteenth time, the game falls into a fairly dull pattern. A lack of the ability to develop your crew and/or ship really emphasizes this feeling and limiting the variation of multiple play-throughs.

Tharsis looks reasonable. The ship looks cool, the UI is simple and effective, and the various dice effects are nice. In particular, the bloody dice resulting from cannibalism. On the flip-side, the crew look only vaguely human, androgynous, and differ only slightly from one another.  Pair this with the aforementioned inability to develop them in any way, and you have a group of characters that are almost impossible to empathize with.  We did notice a strange design choice in that there is only one death or failure animation.  Regardless of how the run ends —whether it be death or destruction— the death screen is always that of the ship decoupling at every connection point and its modules slowly floating apart.  It was a weird and ultimately confusing way to ‘die’ seeing that we couldn’t actually come up with a reason for the strange sequence.  It would have felt more fitting if the ship had exploded when failure due to damage at least. Perhaps some indication of the crew’s fate when failing due to their deaths would also have been apt. 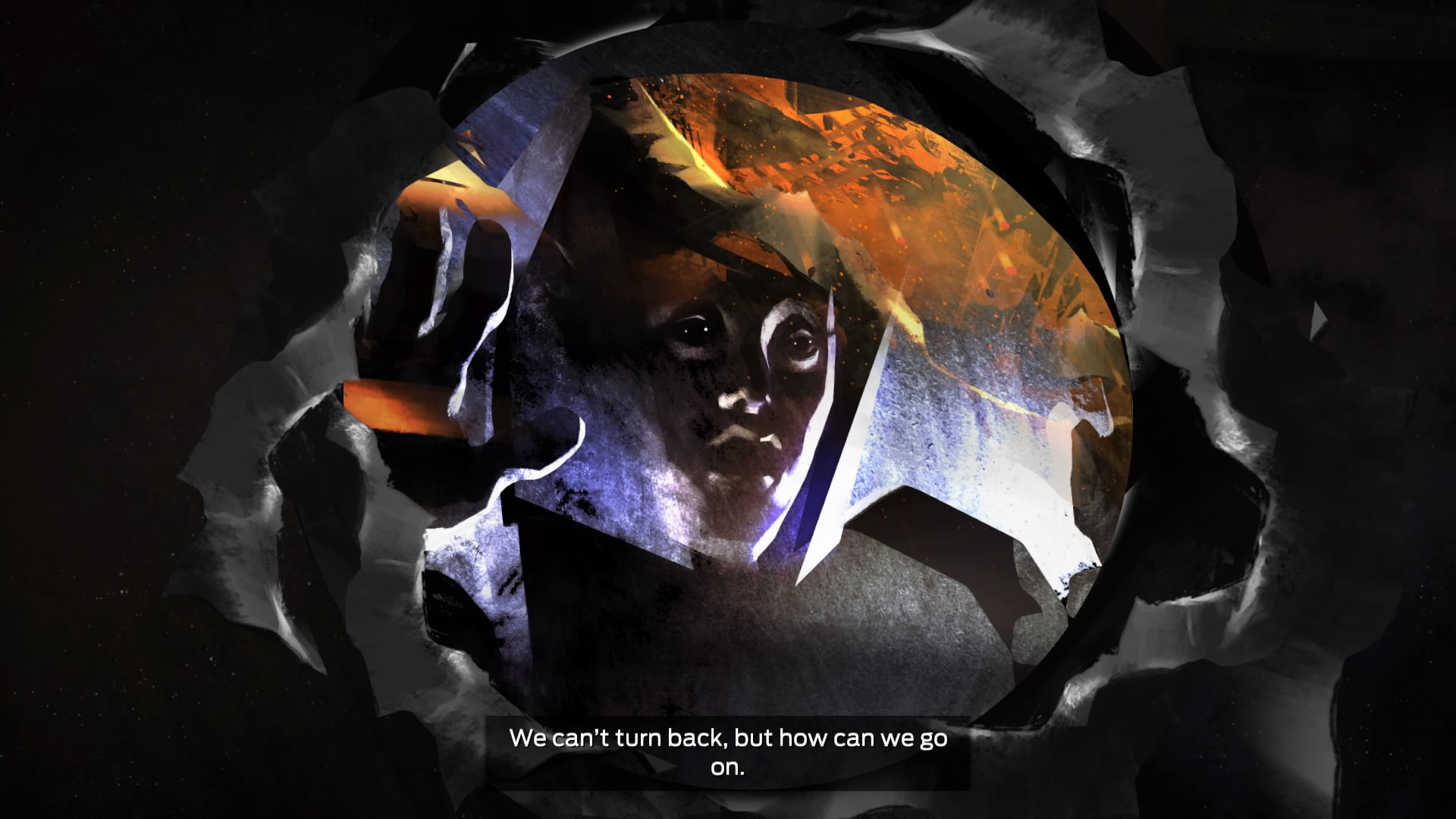 We so very much wanted to enjoy Tharsis. A project with a lot of potential, we’ve had our eyes on it for a while.  Unfortunately, the little satisfaction we could garner was buried beneath a path of frustration.  The brutal difficulty is not offset with a noticeable feeling of player development and the lack of any kind of variation in gameplay and progression only heightens what ends up feeling a fairly dull experience.  While ultimately not a disaster; Tharsis compares to getting to the final round and failing due to a slight miscalculation.