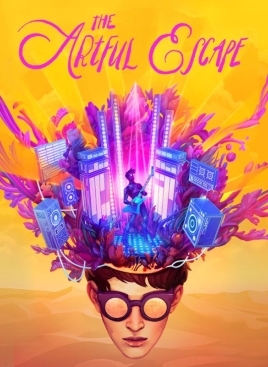 What is it about small Colorado towns that suddenly makes them more desirable? Because immediately after taking a trip to Haven Springs in Life is Strange: True Colors, The Artful Escape now takes us to the town of Calypso. And it also happens to be a game with a major emphasis on music, suggesting that maybe we’re in for another one of those weird coincidental trends in games, like time loops, road trips or dodgeball. And upon entering this town crafted by developers Beethoven and Dinosaur for the first time, you’re again struck by a similar blast of color, with quaint shops and ivy-covered buildings everywhere, filled with life and making a good first impression…even if you won’t be around Calypso that long.

It’s here in Calypso that you put yourself into the shoes of Francis Vendetti, nephew of mega-famous and acclaimed folk musician Johnson Vendetti. And if you somehow forget that part about Francis, then don’t worry, Calypso will let you know. Johnson Vendetti has meant a lot to Calypso, and its clear that it’s their main claim to fame, and they’re looking to Francis to carry on Johnson’s legacy. Or just be Johnson, period, to the point where fliers for Francis’ first show in commemoration of the twentieth anniversary of Johnson’s landmark album, Pines, prominently feature Johnson first and foremost. And you come across huge fans of Johnson, and a closing or closed local store or two, and it’s clear that Calypso needs the return of Johnson.

There’s just one huge problem: Francis isn’t Johnson Vendetti. He’s not a folk musician. He doesn’t sing songs about the plight of miners or nature. He never even met his uncle prior to his death. He’d rather find inspiration in pulp sci-fi novels and pull off hefty riffs as opposed to acoustic ballads. But he’s clearly feeling a lot of pressure, so the show must go on. Well, at least until a mysterious musician named Lightman appears with his assistant and technician, inviting Francis to join them aboard the Cosmic Lung as Lightman’s opening act in several acts across the cosmos. Francis is understandably weirded out, but joins along. 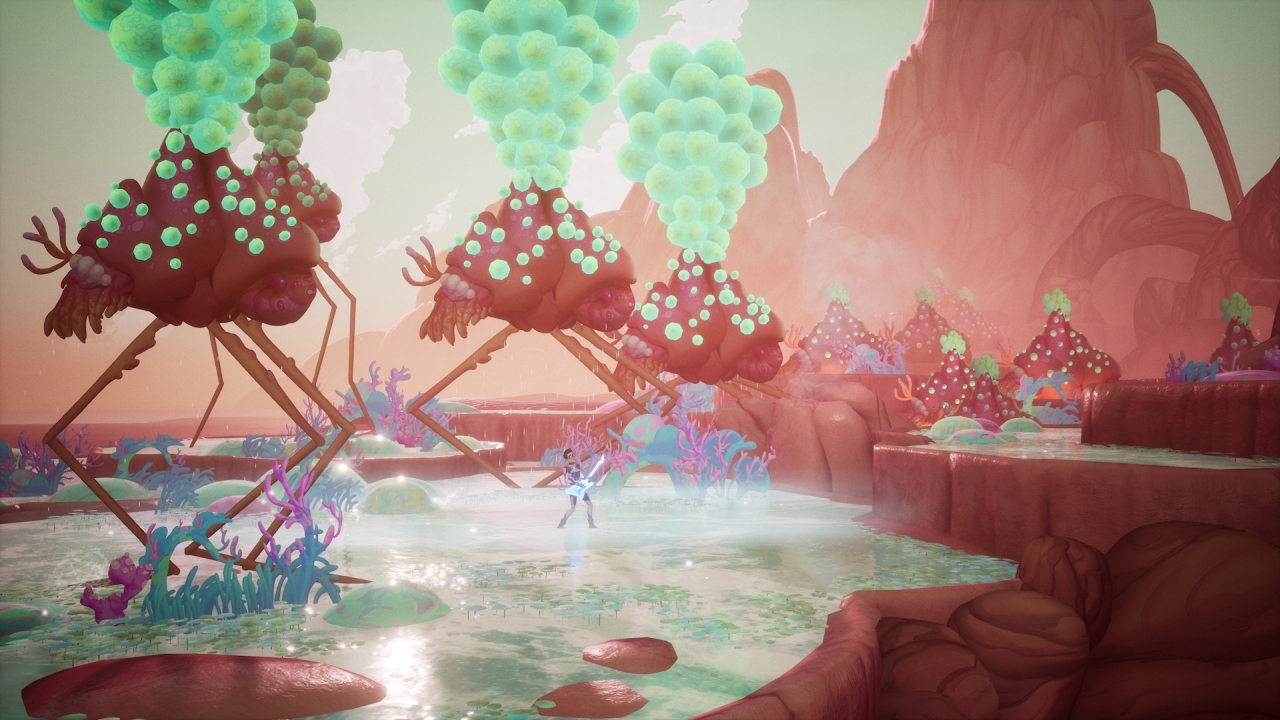 What follows is an odyssey as Francis sets about reinventing themselves while traveling across several alien lands. Throughout these various journeys, Francis will befriend various bizarre, otherworldly beings that allow them to craft their new stage persona. The Artful Escape lets you help Francis fully customize this persona, from their name to their home planet to their backstory, and even a surprisingly deep and flamboyant outfit to dawn, all allowing Francis to finally go full Ziggy Stardust and be on their way to crafting an epic space opera. Francis (or whatever name you choose to give them), however, is still haunted by the demons of their old self, filled with fears of being seen as a fraud in one way or another. Even when he’s light years away, that small town of Calypso is still gnawing at him.

If it hasn’t been made clear by the fact that at least three whole paragraphs here are devoted to it, one of the biggest highlights in The Artful Escape is its epic and engrossing tale of Francis and his new persona, a journey of self-discovery that touches upon themes such as the fear of failure, the fear of success, living in the shadow of someone else’s legacy or even eclipsing it and more. At the beginning, Francis is a bit of a nobody, but after their first gig they suddenly find people in the Lung’s bar singing their praises and saying they liked them before they were cool, while those in the VIP rooms are a lot more critical, and hucksters downstairs are suddenly selling t-shirts with Francis’ face on them. The story may delve into the occasional tropes you’ve seen in other show biz tales, but they’re all used expertly here and highlight the dizzying rise to fame. 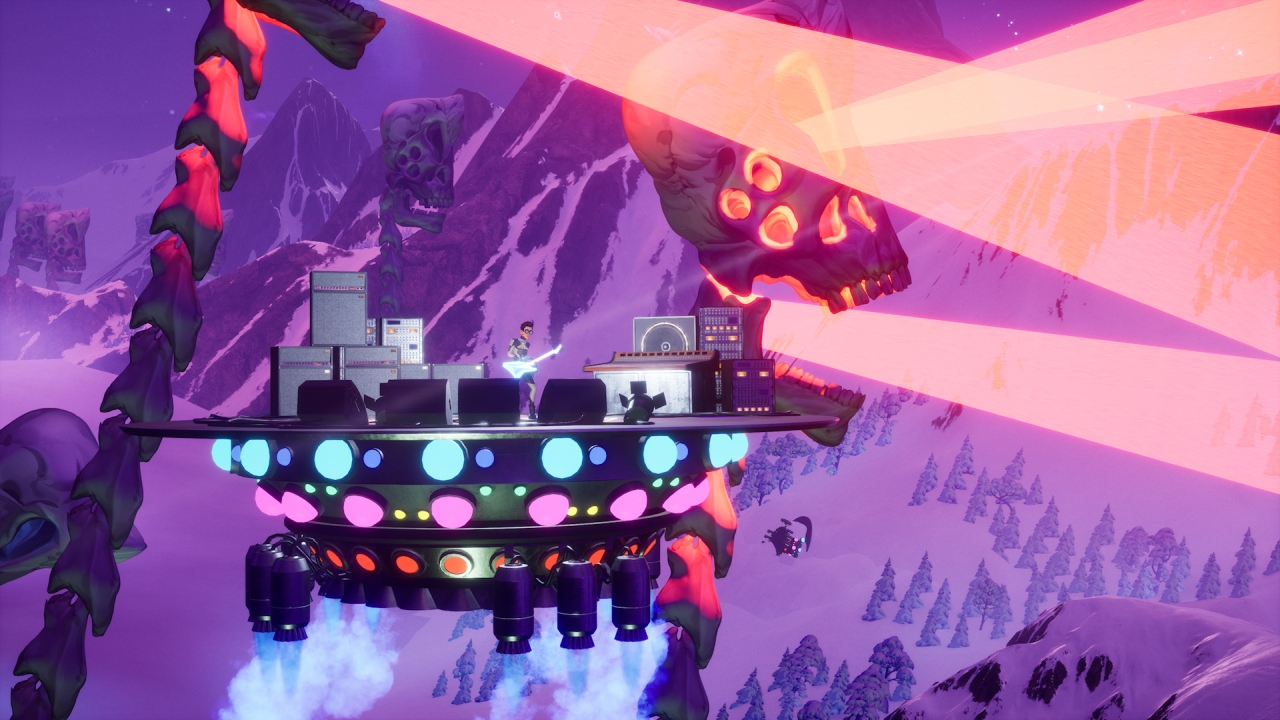 Of course, what helps make for a terrific story here is a terrific cast of characters as well. Be they the smaller inhabitants of the Cosmic Lung or more grandiose alien beings that Francis has to impress with their skills, all of them have nice and colorful personalities and allow for a lot of unique conversations, not to mention truly inventive designs and little backgrounds. This is helped by a particularly impressive voice cast, with Michael Johnston doing a superb job as Francis, Caroline Kinley a delight as the snarky Violetta, and while Jason Schwartzman, Lena Headey and Mark Strong show up for nice bits, the MVP here is arguably Carl Weathers as Lightman, who clearly has a blast as this eccentric rock star mentor.

Another huge star here, though, are the visuals. rather unsurprisingly for a game inspired by epic ’70s rock operas and concept albums, The Artful Escape has an absolute blast when it comes to cooking up unique psychedelic alien landscapes that Francis travels across, along with their larger-than-life inhabitants. There’s never a moment when it isn’t vibrant and stunning, with several amazing setpieces as Francis finds different ways to put on some show-stopping concerts, assisted by Violetta’s stellar laser stage shows. It also has a lot of variety, switching between Yes album covers, Austrian opera houses, interstellar radio shows, desert watselands, Narnia-esque ’80s shopping malls stored in a closet and much more. Oh, and the soundtrack is also amazing with some of the greatest instrumental guitar jams that you may hear all year, but given the setup, was that ever really in doubt? 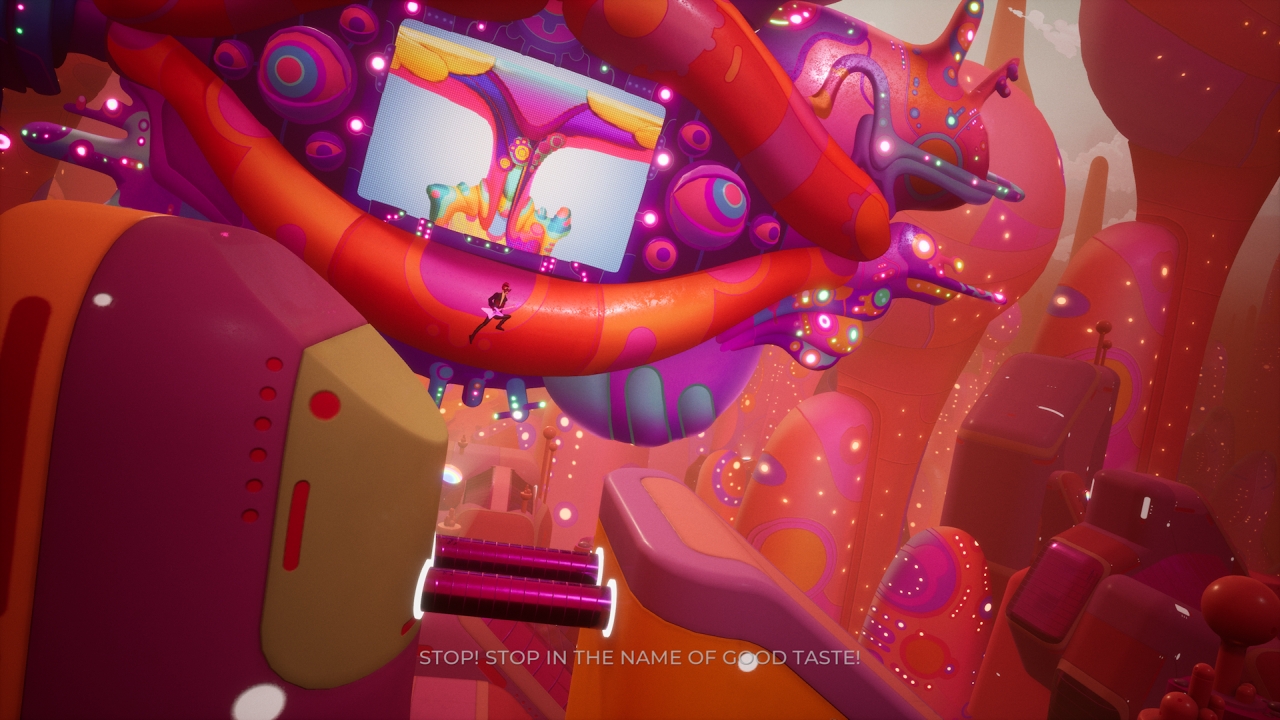 Unfortunately, The Artful Escape also has to be a game as well as a story, and that’s where it gets held back. There’s nothing truly bad about The Artful Escape’s gameplay. It’s fully competent platforming, having Francis head to the right and jump across a few obstacles, but you also have the power to hold down a button and shred a guitar, which can cause the environment to react in various ways. Giant creatures spring to life and march around you, environments light up, nature itself provides various special effects, all in a glorious display. But there’s never a reason to not shred outside of allowing for a possible triple jump at times, so you may as well just hold down the button for the entire duration of the level when possible.

The same goes for other abilities like powerslides and slamming your guitar into the ground, as they’re merely for show. There are a few things you can interact with in each area, like examining the scenery, but no collectibles or anything that can extend each planet or ship’s lore even further. Even the actual concerts Francis has to put on for various beings amount to little more than a game of Simon (although the way the game implements the design of the “musical key” used for the patterns into each design in a unique and organic way shows more creativity). And while the desire to keep the focus on the narrative and less on gameplay is understandable, similar games such as Night in the Woods still used it in a way that encourages exploration, whereas The Artful Escape is fully linear.

There’s nothing wrong with having minimal, linear gameplay in favor of a deeper story, and there’s also nothing wrong with merging that type of story with deeper gameplay. The Artful Escape, though, goes with the illusion of gameplay that should be deeper, with all of the various moves Francis can pull off that don’t really mean anything and platforming sections with what feels like a minimum amount of obstacles. And for a game that features its main character having to find his confidence and courage to be the bold artist that they want to be, the rather safe, non-risky gameplay undercuts that message. It’s not a deal-breaker, by any means, but it does end up being the equivalent of one dud track on an otherwise classic album. 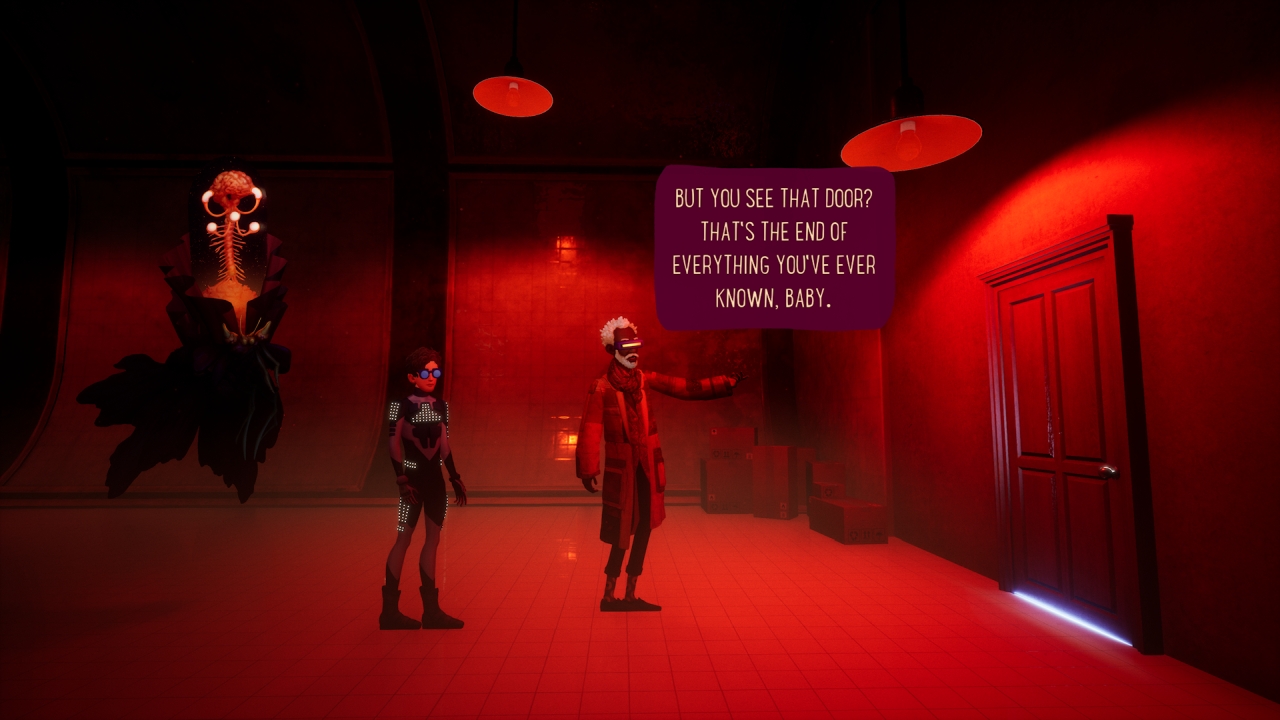 The Artful Escape may not have particularly deep or challenging gameplay, but the main reason to attend this show is its incredible writing and Francis’ trippy, out-of-this-world journey in discovering his new persona, one which features a lot of nifty twists in various ways, alongside truly striking sci-fi visuals and an expertly-crafted soundtrack. The Artful Escape is an astonishing rock and roll epic that the likes of Ziggy Stardust would be proud of.