It’s hard to have a pulse and at the same time not know who the Beatles are on at least a basic level. A rock band that became one of the most memorable of their generation and achieved a level of iconic status, the Beatles have now finally been immortalized in the video game medium with The Beatles: Rock Band. The game is an amazing display of a band-themed game done correctly, but even still it has a few flaws that gum up the proceedings. Still, fans of the fab four as well as those who can barely hum along to a few Beatles songs will find something to enjoy.

Calling the game a simple reskin of Rock Band 2 is both accurate as well as doing a disservice to the game. On one hand it is still the same game underneath it all, right down to the traditional if not Beatles-authentic setup of having one guitarist, one bassist, and a drummer. However, the game is absolutely permeated with the Beatles’ theme, from the styling of the menus and game UI right down to snippets of studio chatter and TV hosts talking up the Beatles upcoming performance right before you take the stage. If you are a Beatles fan the styling and photographs will be a treat, as will be the song selection which covers a wide swath of their hits from many different time periods of their career. 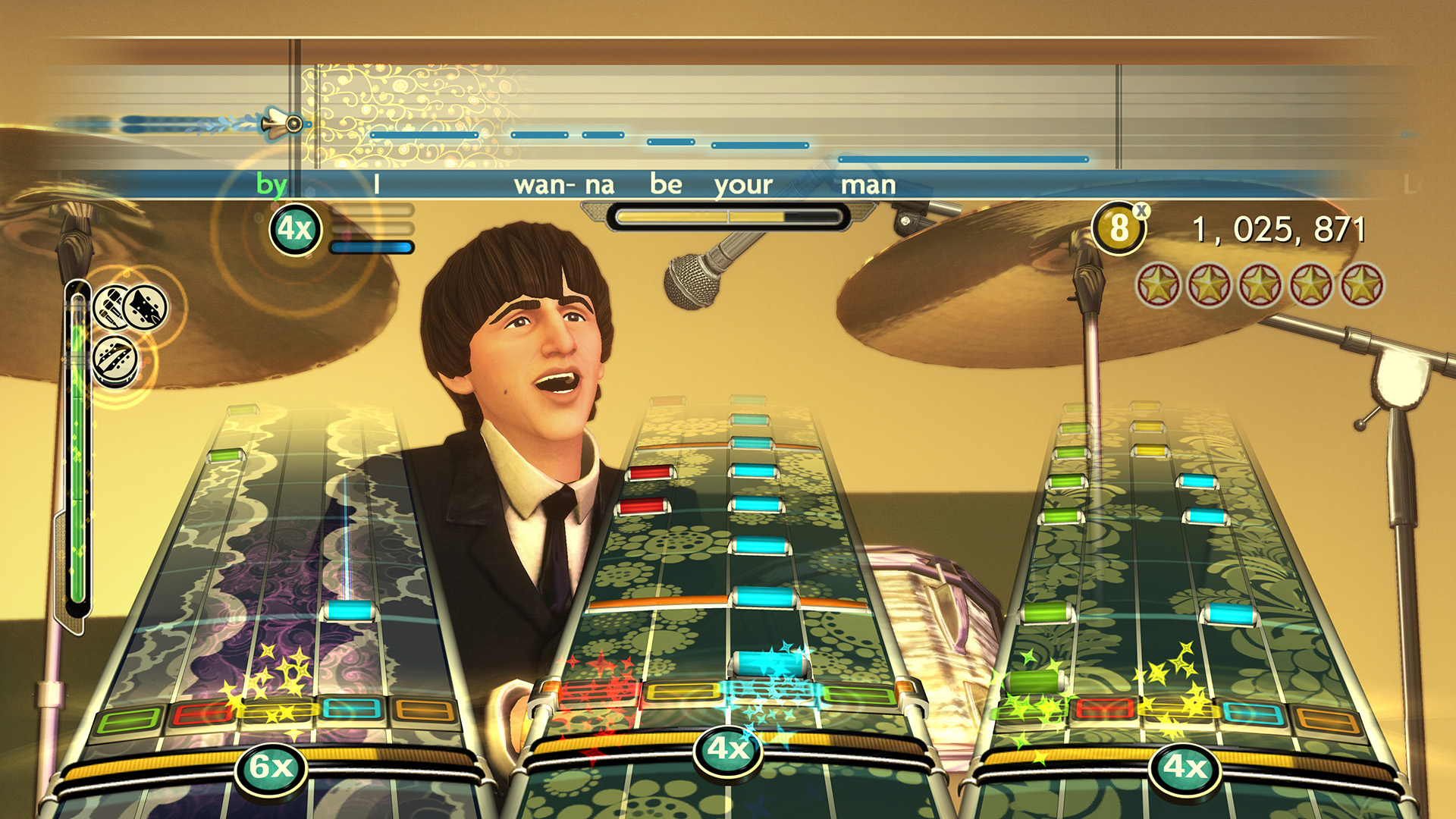 If you are not a Beatles fan, the game shows them with some of their most popular songs which themselves are quite enjoyable assuming you are a fan of ‘60s era rock. There is still a lot of fun to be had playing through the career mode and essentially taking an interactive tour of what their music is, but the style and collectibles that you gather by racking up the star count will likely be unimportant. You don’t have to be a fan of the band to enjoy the game, but the game is most certainly geared towards those that are.

However, the game does have some noteworthy flaws, both cosmetic and functional. Hitting star power makes your highway light up with a fancy yellow pattern that looks very stylish, but also has the side effect of making it difficult to pick out yellow notes or bass hits on the drums. On newer, high definition TVs this proved to not be a problem, but on standard definition sets it makes the use of star power more of a detriment than a benefit unless you know the song. Another issue is that The Beatles: Rock Bandand the overall Rock Band 1 & 2 platforms are not compatible, meaning that you cannot import the songs into each other. Given that the only songs on The Beatles: Rock Band are from the Beatles it makes for a monotonous gameplay experience.

One thing that the game does clearly innovate on is the inclusion of vocal harmonies and up to three players can grab a microphone and sing along. The three vocal tracks show up as different colors on the vocal chart as well as make use of differing vocal symbols, so there is little to no difficulty in picking out which parts to sing. The difficulty comes in figuring out which pitch your particular vocal track is supposed to be sung in, and doing so has an enjoyable if not considerable learning curve. Thankfully the game grades each player across each part, so if you find yourself accidentally singing the main vocals rather than your harmony you don’t get docked for it in terms of band performance; but rather you won’t achieve as many points by the end of the song than a trio of vocalists who consistently sing their individual parts. 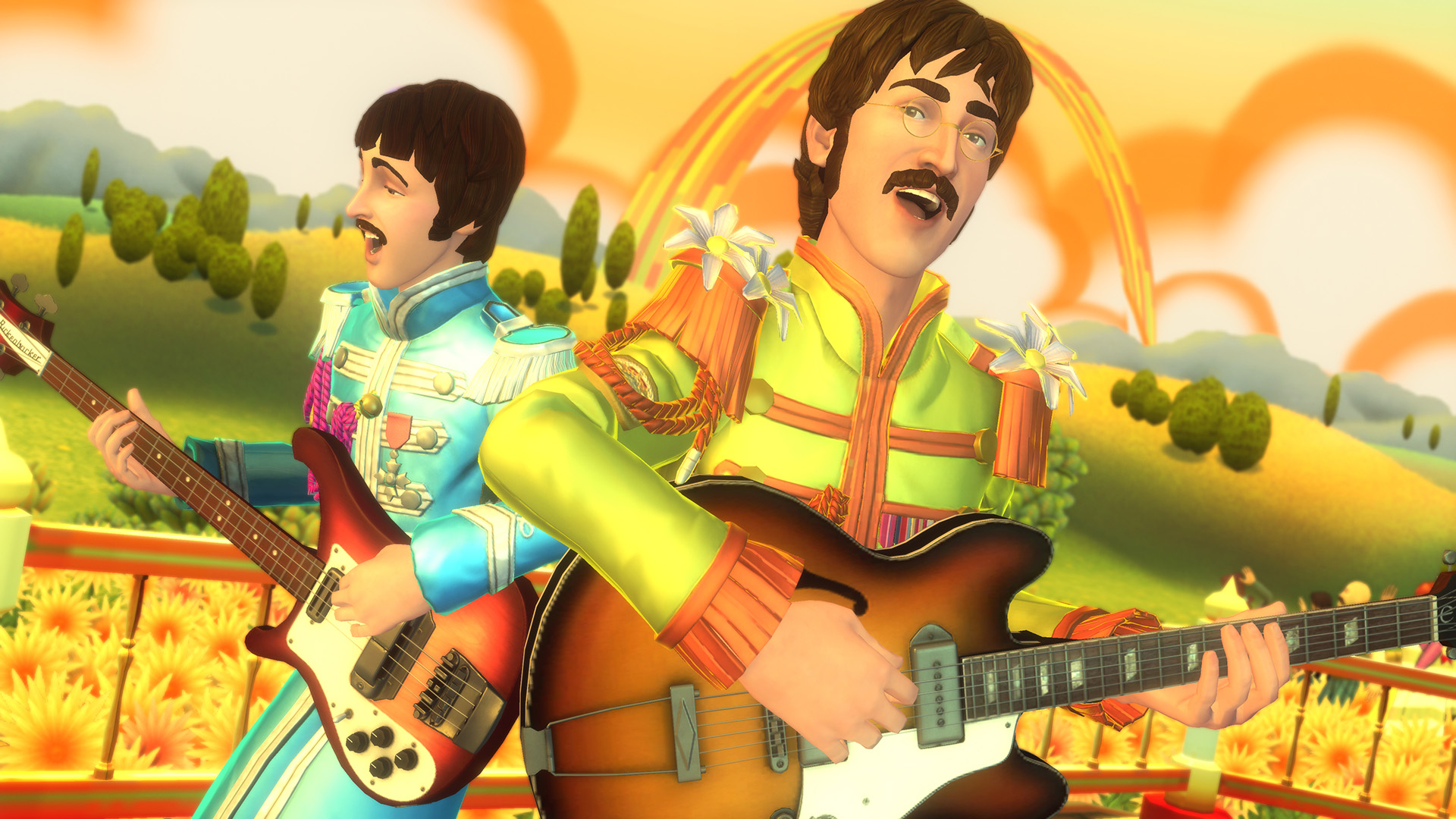 The Beatles: Rock Band is very much so geared towards fans of the band. Some aspects might not mean much to you if you don’t know the band very well, but you will still have fun playing through the songs themselves. Though the flaws of a purely Beatles track list and star power obscuring notes drag things down a bit, the game is really an example of a band-themed game done right. It puts the band up on display while at the same time delivering an experience styled accurately around the band without sacrificing any gameplay in doing so.