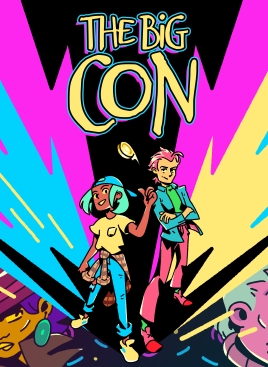 People have a lot of a nostalgia for the 1990s, as evidenced by extremely large amounts of pop culture that aren’t taken up by nostalgia for the 1980s. There are many things from the era that appeal to a lot of people, especially in video games, but one timeless aspect that was especially prominent back then was the image of teenage rebellion. It’s an image that The Big Con, a road trip adventure from Skybound Games and developers Mighty Yell, wears on its sleeve proudly. Now merge that image alongside classic road trip adventures and heist stories, and you should have the recipe for one impressive game.

The Big Con centers around Ali, a simple teenager from a small town how works at a video store alongside their mom. They want Ali to head to band camp for the summer and make something of themselves, hopefully finding something better in life than just rewinding tapes over and over, but band camp has to wait once Ali learns that her mom owes over $97,000 to loan sharks, and that if they don’t pay up in two weeks, they’ll lose the video store. Not wanting to sit by and do nothing, Ali soon meets a con artist nearby who teaches them the tools of the trade, and just like that, Ali is ready for a cross-country trip to Las Vengaza, armed only with their fanny pack, hoping to earn all of the money needed somehow…

Drenched in ’90s influence, the game even has Rockapella performing the theme song, alongside a good soundtrack. But the big draw is that The Big Con is drenched in “totally rad” aesthetics of the era, especially in its color palette and patterns. It makes for literally and figuratively colorful backdrops, especially as it creates a nice contrast to a world where more and more Blockbuster and Starbucks-style chain stores are taking things over. The nifty style is undermined by a few graphical errors, though, such as some notable cases of clipping or misplaced objects in certain scenes. 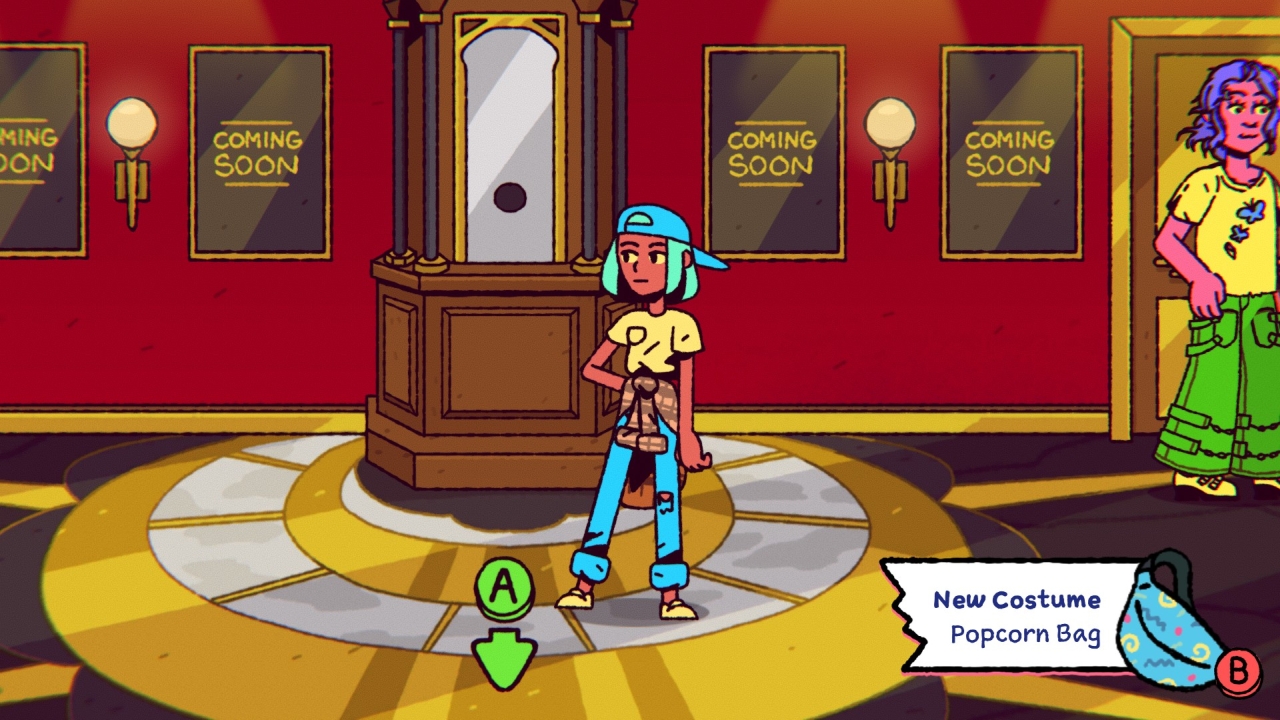 There are two ways to earn money in The Big Con. The first is, unsurprisingly, various cons that take the form of various puzzles. First Ali has to approach a target in various ways, sometimes by directly talking to them in various ways, sometimes by finding an area that allows her to eavesdrop on them to learn secrets. Sometimes you might even have to tail a mark around entire maps across multiple conversations in order to get the info you need or extra dialogue options that allow for more money and opportunities. This is where the game excels, as the majority of these puzzles are well-designed and nicely open-ended, and allow for a lot of various solutions. For example, Ali can steal a golden fanny pack and sell it to a man looking for one, or just find an old fanny pack in the garbage and use some gold spray paint on it. Or spray paint the fanny pack, sell it, then steal the gold one to pawn later anyway.

The second major way to earn money is by pickpocketing it from people. This involves walking up behind them, holding down a button and letting go of it when a needle gets to a certain point in a meter, and…uh, that’s it. It’s not particularly bad or broken in any way (except when pickpocketing a moving target and getting interrupted by a dialogue balloon), but it pales in comparison to the more deeper and rewarding puzzles to undertake. And even the ones that require pickpocketing feel shallow due to how easy it is, regardless of how valuable the target. The worst thing that happens is that you have to don an impromptu disguise that Ali can find to continue interacting with the person.

But the reason for doing all of this — aside from getting the money to save the video store, obviously — is that each area basically requires you to reach a minimum goal of money gained in various ways. You can keep going even after you hit that amount, mind you, searching for even more ways to earn dough, like selling any and all of your spare goods to the quirky collector/pawn broker, who buys any junk Ali comes across as has specific award for finding items belonging to certain themes (objects reminding them of tropical settings, cows, birthdays, etc). In general, you should talk to everyone you meet anyway, largely because they have a lot of chuckle-worthy dialogue, and a few even have rewards if you interact with them in various ways as you meet up with them across the entire game…even if the journey to reach those goals isn’t that huge.

Maybe it’s just having been spoiled by the recent Road 96, but The Big Con never nails that feeling of an epic road trip. You head to a mall, then there’s a train ride, and boom, suddenly you’re in Las Vengaza, with only a couple of locations around it afterwards. For a game supposedly about Ali grifting their way cross-country, it never comes across as anything more complex than a few areas with a few decent puzzles. And while the game encourages players to find as many creative solutions to money woes as possible, the vast lion’s share of the $97,000 is still guaranteed by the plot. A larger variety of locales and challenges could have improved things further. 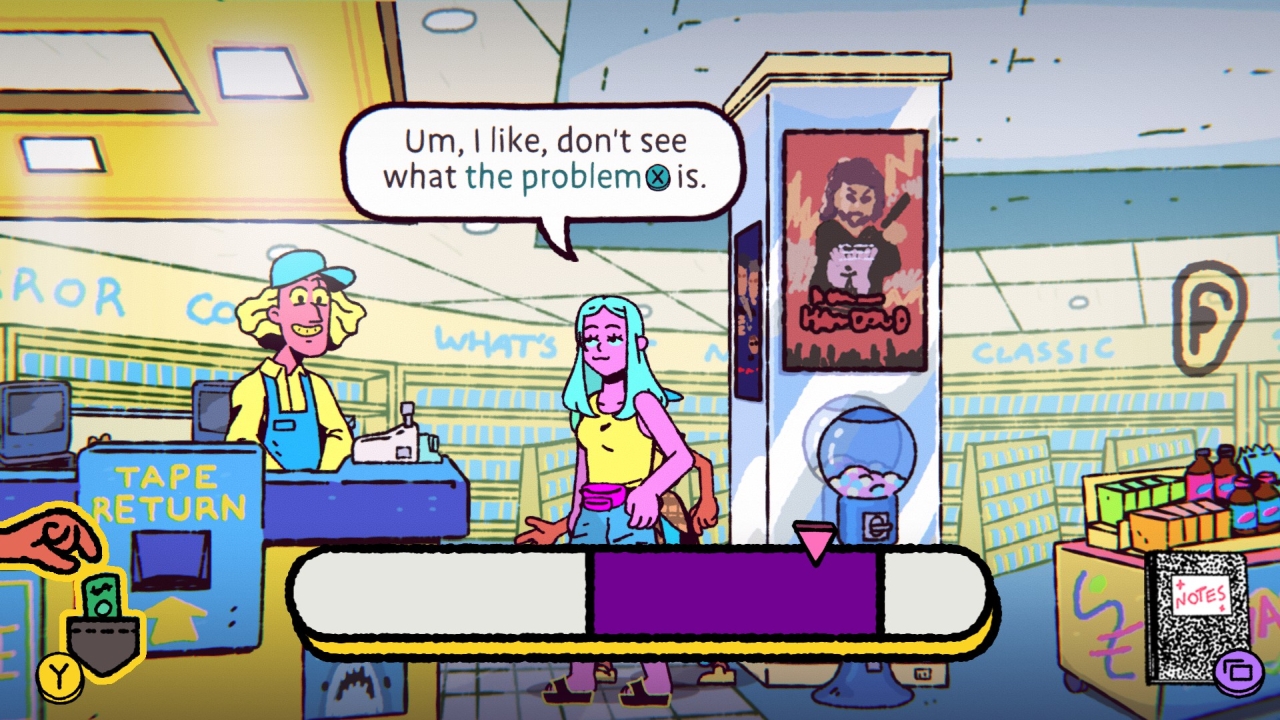 Maybe that particular complaint is a nitpick, and it feels more like the game didn’t meet certain expectations, but this is sort of the one big problem with The Big Con as a whole: It’s all perfectly fine overall, but no part of it ever goes beyond “perfectly fine” even when it should. The gameplay is solid, but could use more reliance on deeper puzzles instead of pickpocketing, the early ’90s aesthetics are eye-pleasing, but they feel surface level, and while there is a solid story about trust and maturity for Ali, the majority of  depth of it comes from optional phone calls. The Big Con clocks in at about four hours, and while I’m one hundred percent in favor of short games, this feels like an instance where it should have had more meat to it, especially in certain areas.

Case in point: without going into any spoilers, for a game whose name implies some sort of massive heist or a complicated act of subterfuge, The Big Con ends with a whimper instead of a bang, at least gameplay-wise. First, you have to retrieve a crucial item from one of the antagonists, which involves having to participate in some sort of “con-off” for all of the marbles…or you can just replace the item with two successful pickpockets (and not even fast and difficult ones). Then there’s the main antagonist who can get taken out by eavesdropping on a single stationary conversation for a piece of info to use against them. The final section of any game should be the ultimate test of skills and/or or have the player build up to it in some way or another, so one would expect something akin to delivering the rebuttal in a Fallout game available via Speech 100 that lets the hero convince the villain that their plan is ultimately doomed in some way. Here everything is solved with basic tricks from the tutorial. More like a minuscule con, really. 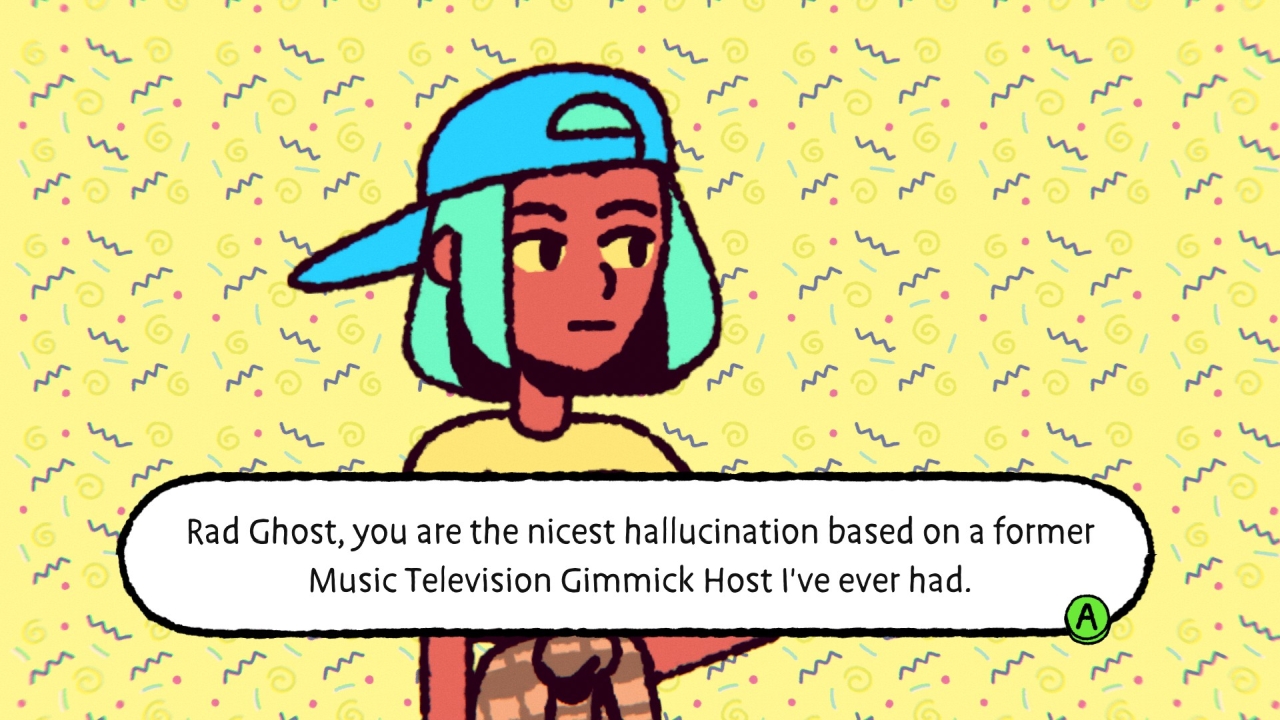 The Big Con succeeds when, as its title suggests, you’re working on elaborate con jobs that provide clever puzzle ideas with a lot of open and fun gameplay. While the rest of it is fine, it never feels like the sort of epic cross-country adventure it should be, despite what its stakes would suggest. It still makes for a good adventure with well-done challenges, and that alone may be worth it, but don’t expect a grand score by the end.