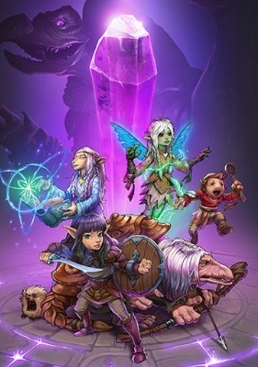 The original Dark Crystal film first debuted in 1982, and although it didn’t see quite the success Jim Henson would have liked at the time it went on to spawn a cult following for years to come. Just last year players were finally introduced to the prequel taking place in the same world and not long behind it the reveal of a video-game tie in. The Dark Crystal: Age of Resistance Tactics takes on the role of being a way for players to relive the story in the series with a combat-based approach. Does it manage to pull this off well or is it simply another forgettable tie-in attempt?

Those who are unfamiliar with the story in the series may want to spend some time watching that before diving in, as the story presented in Tactics is a mainly abridged version. Many years ago a race known as the Skeksis came from a far away place and took control of the crystal of truth on the world of Thra. The Gelfling, main inhabitants of Thra not knowing any better, decided to work alongside them as their underlings while the Skesis ruled over the land. A young Gelfling by the name of Rian who works in the castle of the crystal accidentally uncovers the truth that the Skeksis have begun draining the Gelfling of their life in order to stay immortal. After being seen he decides to flee the castle and try to warn the others of the betrayal by the Skeksis. Unfortunately for him the other Gelfling find it hard to believe this is true and thus begins his and many other’s journey to uncover the truth and stop the evil that’s been done by the Skeksis.

As the name implies, Age of Resistance is a tactics RPG in which players will choose from a variety of party members to bring into battle. Characters are gradually earned through progressing the story and are mainly made up of Gelfling characters from the show in addition to some smaller side characters. Each character has their own strengths and weaknesses which make them more inclined to lean into certain jobs available. Gelflings all have access to the same web of jobs which starts with a soldier, scout and mender that slowly branch into altered classes as they level up. Each character selects one main class and can choose a sub class whose abilities they can also borrow for combat. Active abilities need to be chosen carefully, as there is a limited amount to take into battle. It makes it a good idea to look ahead at what’s coming and select skills suited for upcoming battles. Each character also has equipment that changes based on their current job and character, making for a lot of different ways to approach combat. The one issue with equipment is that it feels a little too expensive in relation to the available playable quests even if only choosing to use a handful of characters. By the time enough money has been earned to get better gear, more expensive gear has been unlocked making it feel almost like it’s better to wait at times. This could be alleviated with the ability to sell currently existing equipment, but unfortunately it can only be bought and none sold back. 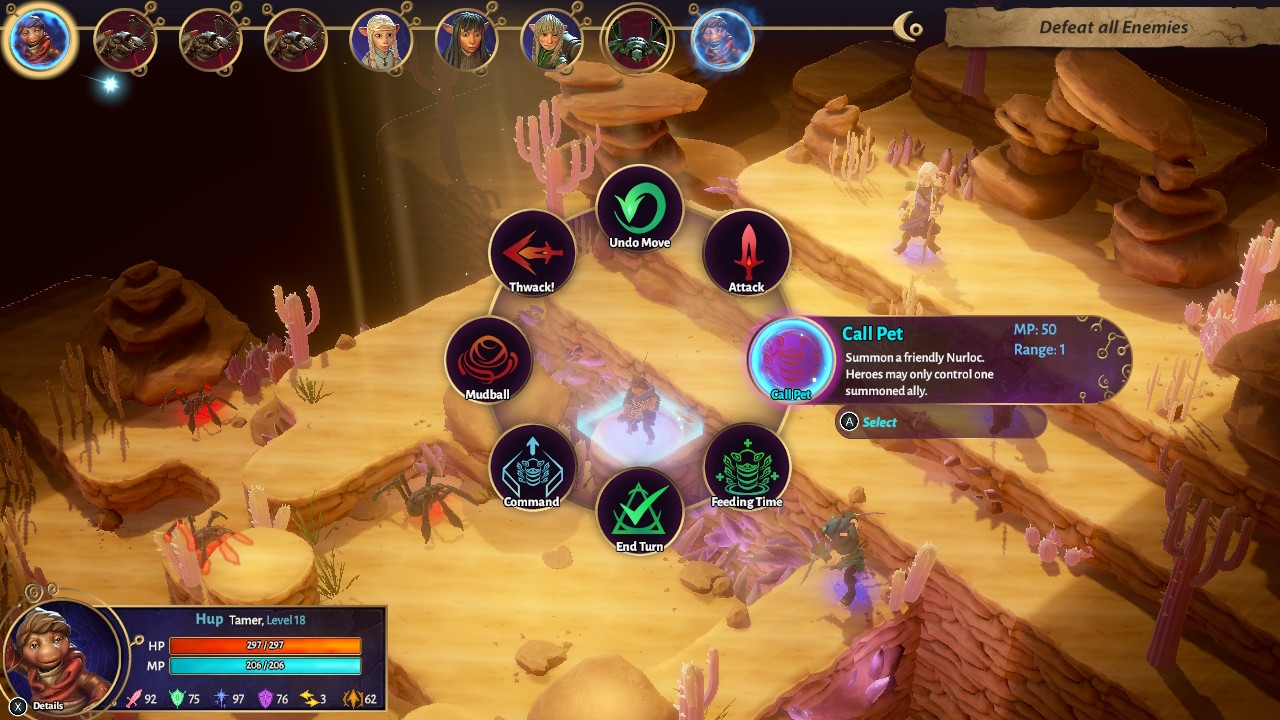 Once characters are all ready for a fight they can head into battle. The overworld map allows players to decide where they want to head next as there are usually multiple choices. Combat takes place on grid areas with wonderfully detailed maps showcasing the landscape of Thra and of course the enemies that will be encountered. Most tactics titles take the approach of having each team take turns in combat, but Dark Crystal incorporates speed into the mix and instead has each character have a turn based on their recovery speed. This make strategizing much more complex than deciding who goes and attacks where, as it’s important to take into account who will go next. Some skills will help speed characters up, while certain weapons and jobs will be slower or faster than others. The top of each map makes it clear who the next good few are to go, so there’s tons of ways to plan out combat in order to turn things the right way. There’s also no consequence for losing in a fight, so backing out or trying different strategies is an easy way to learn. Certain characters even get advantages based on their species, such as being resistant to poison or gaining more stat boosts from equipment. Select maps once completed will also open up addition side missions that can be defeated again for money and experience, making it easy to train a little before continuing on.

The visual style for Dark Crystal is charming and fits the puppet characters seen in the actual shows. Cutscenes are played out in drawn comic-styled panels that give a lot of emotion to each character that isn’t necessarily as easy to capture with the puppets used. The drawback is that the story is just an abridged version and anyone who hasn’t watched Age of Resistance will likely feel confused or lost at the sequence of events. The music fits right in with the aesthetic of the world and may have been taken from the show as many songs sound familiar. It’s not a particularly stand-out soundtrack but the songs fit the general atmosphere. It does have some occasional hiccups and brief slowdown while playing, and loading times are perhaps a bit longer than they should be, but for the most part the gameplay offers a surprisingly smooth experience. 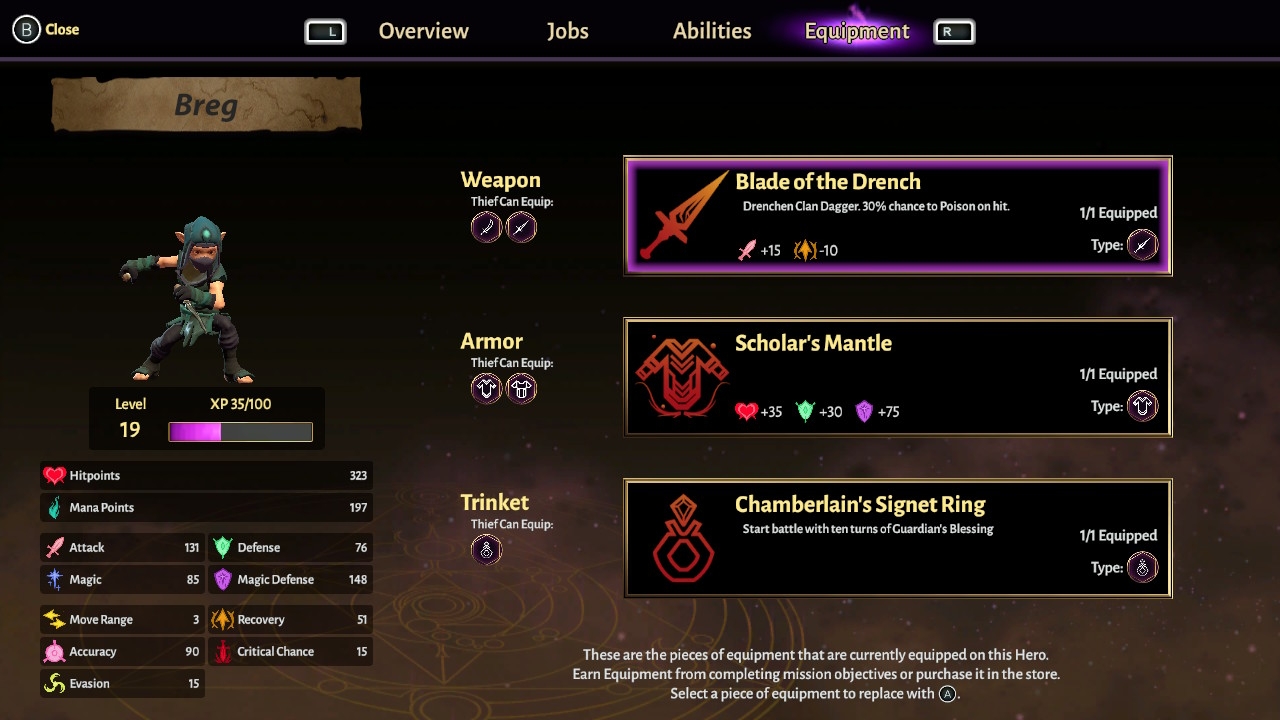 Dark Crystal: Age of Resistance is a series mainly created for fans with the intention of drawing in more interested parties. Tactics is in the same vein, but aims at the fans looking for a way to experience the characters they love in a different environment. Although the story is simply recapping what was in the original show, it offers surprising depth to its combat with fun strategy that makes it an enjoyable romp. The story itself also isn’t terribly long, but offers replayability with a hard mode for players to take on looking for a bigger challenge. There’s also a simple story mode for those wanting to take it easy. Those who haven’t watched Age of Resistance will likely be lost on this title, but those looking to visit Thra and the many Gelfings they remember would enjoy diving into The Dark Crystal: Age of Resistance Tactics.