We all like to roleplay. Sure you can dress up as a warrior, run around your town picking up herbs and look for ogres to slay, but who has time for that? Definitely not me. Thankfully for us, there is a large array of role-playing games (RPGs) in the marketplace for all platforms as well as tastes.

There is still a percentage of gamers that create these experiences the old-fashioned, pen & paper way. But what about the rest of us that would like to enjoy such experiences and save some trees in the progress?

Making its way from Germany, Drakensang promises us the original feel of a true role playing game without the dice, pen or paper. Drakensang is a third-person party-based RPG based on the role-play rules of The Dark Eye (TDE). This is the first PC game for over 10 years to be based on Germany’s popular role-play system. The story has been developed in close collaboration with the original authors, so established fans will immediately feel at home.

The game starts of like any good ol’ RPG should: there is trouble brewing and you will be given the task to fix it! Summoned to the city of Ferdok by an old friend, you will discover that the city has been shaken by a series of murders. From here on out, you will be presented with new quests and challenges that pack the game with over 40 hours of herb-picking, wolf-hacking, problem-solving goodness. Drakensang does not reinvent the wheel when it comes to its story progression. Solving problems, moving for one town to the next, it’s all things we’ve done before. However, the game is well-written and you will find yourself easy engrossed in the development of your character and the living and thriving world around you.

Creating a character is as easy as you need it to be or as complex as you want it to become. The game offers you over 20 pre-made characters to choose from such as Warriors, Amazons, Mages and Pirates. In addition, you will have more than 40 spells, with over 30 talents and almost 40 special abilities allow a large range of possibilities for character creation. If you are an experienced player and are familiar with TDE universe, you can go into advance mode and tweak your character’s attributes to make it your own. I decided to go pre-made female meta mage; I trust you TDE.

As you step in to the world of Aventuria, you will be pleasantly surprised. Taking into account this game retails for $29.99, I wasn’t expecting much in the graphics department, but I was wrong. Sure, you will see re-sampled textures and background townspeople strolling around, but the pretty environments and towns will grab your attention. The game offers high resolution renders as well as high, low and medium settings. As you walk around the town and start picking your missions, you will be able to recruit up to four adventurers to join you on your quest. They usually ask for some sort of help with their own quests before joining you, but I’ve continued the game without doing so; sorry Amazon lady. When you start rolling with your newly found crew, you will find them extremely helpful as well as immensely aggravating. AI issues such as getting stuck on objects or lagging behind will make you have to switch back and forth to control all of your party.

Because of that constant switching back and forth and moving my own character around, I’ve had to rotate my camera… a lot. Controls are a bit clunky when attempting to move the camera view left or right with the mouse, but I’ve found using the key shortcuts made this a bit easier. Although the camera controls aren’t as smooth as they should be, the game feels simple enough to pick up and play. Finding where to go and who to talk to is easy enough and doesn’t force you into a linear path giving you ample room to explore the land. A map is available for you noting all your pending quests, so you can come back to them later.

The fighting mechanic for Drakensang is a tactical, turn-based style remaining traditional to the RPG genre. Each character alternates rounds in which each fighter performs attacks and parries automatically. You can use “V” to pause the action and develop your strategy without feeling pressured. If you are used to hack and slack sort of combat, this will feel a bit slow. But for the fans, the combat works the same way as the original RPG under the hood. As you progress and level up, you will unlock more attacks to show off. As well as being able to gain these new skills, you are also able to learn other skills like hunting, blacksmithing or alchemy at workbenches scattered around town.

On your expeditions you will be able to talk to many of the NPCs, but be prepared to do alot of reading. Although some character dialog might start with a voice over, the rest of the conversation will continue in text format. However they will continue to move their mouths, so don’t worry — your speakers aren’t broken. Giving you choice in what to say during a conversation has become pretty popular in RPGs now days and Drakensang is not falling behind. You might have some choices, but don’t expect any dialog to the scale of Mass Effect. 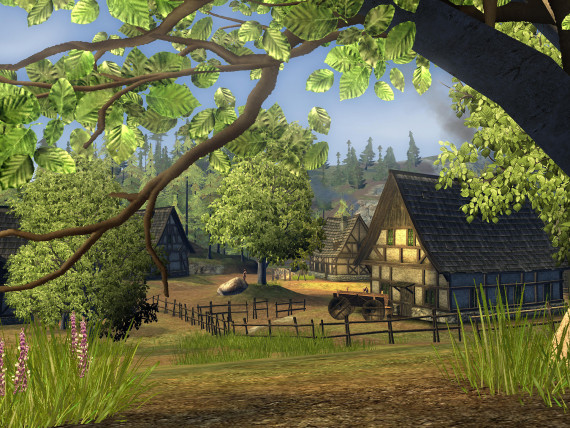 For the $29.99 price tag, The Dark Eye: Drakensang, offers you a full 40 hours of well-written story filled with missions and side quests to complete. With a variety of characters to start with and customize, you can create your own gaming experience. Although controls aren’t as smooth as they should be, the game is pretty simple to pick up giving you a sense of direction, but just enough freedom that you are able to explore to beautiful world of Aventuria. It might be a single player experience, but you will be able to bring adventures with you on your quests to emulate a multiplayer experience. Sure, they can be a bit slow but they really do mean well. Leveling, enhancing, picking herbs, saving the world — it’s all in Drakensang. For the price? I’d say it’s a pretty good value.