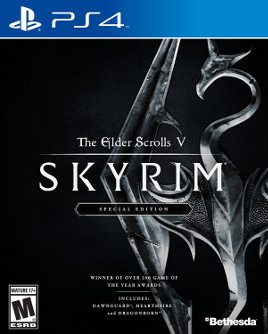 Six years ago the newest Elder Scrolls game took players to Skyrim, which ended up becoming one of the best RPGs to come out of the Xbox 360/PlayStation 3 era of gaming and also not too shabby an entry in the list of great PC games. The Elder Scrolls V: Skyrim was huge, both in terms of the physical game world and in the amount things that can be done.  Completionists can easily spend a couple hundred hours trying to accomplish everything there is to do, so now is about the time most of them have finally exhausted all available activities and that means it’s time to start over on the Nintendo Switch.

Skyrim is apparently Bethesda’s banana stand, since just about a year ago we saw it make the leap from 720P to 1080P (or 4K if you had the appropriate console and TV) and appear on the Xbox One and PlayStation 4. A concern with porting anything over to the Switch is that is simply is less powerful hardware than those two other consoles which those limitations were showcased when Doom made its way to the Switch. Skyrim was originally on the previous console generation, however, which the Switch can handle admirably, making this port of Skyrim look better than the 2011 release but not quite as stellar as the 2016 version if it were in its full 4K majesty. But let’s be honest, no one is going to buy Skyrim on the Switch because they want the best visuals in town, they’re going to buy it because its a legit way to play Skyrim on the go.

Anyone who is familiar with Skyrim needs to ask themselves if they wish to start the game over again on a Nintendo console that has a portability option, and that is pretty much the answer on whether or not this rerelease is worth picking up. There are a few things that make this version unique compared to the other options out there. This version of Skyrim is compatible with The Legend of Zelda amiibos. Tapping these has a chance of unlocking Zelda themed items, like the Master Sword, Hylian Shield or Link’s trademark tunic. Players who don’t play with the amiibos can find Zelda themed items in a treasure chest at the top of the Throat of the World. These items don’t quite match up to the visual style of the rest of the game, but they’re just fun items to have to cater to Zelda fans and if you’ve played Skyrim on other consoles previously a little more levity this time around won’t hurt anything. 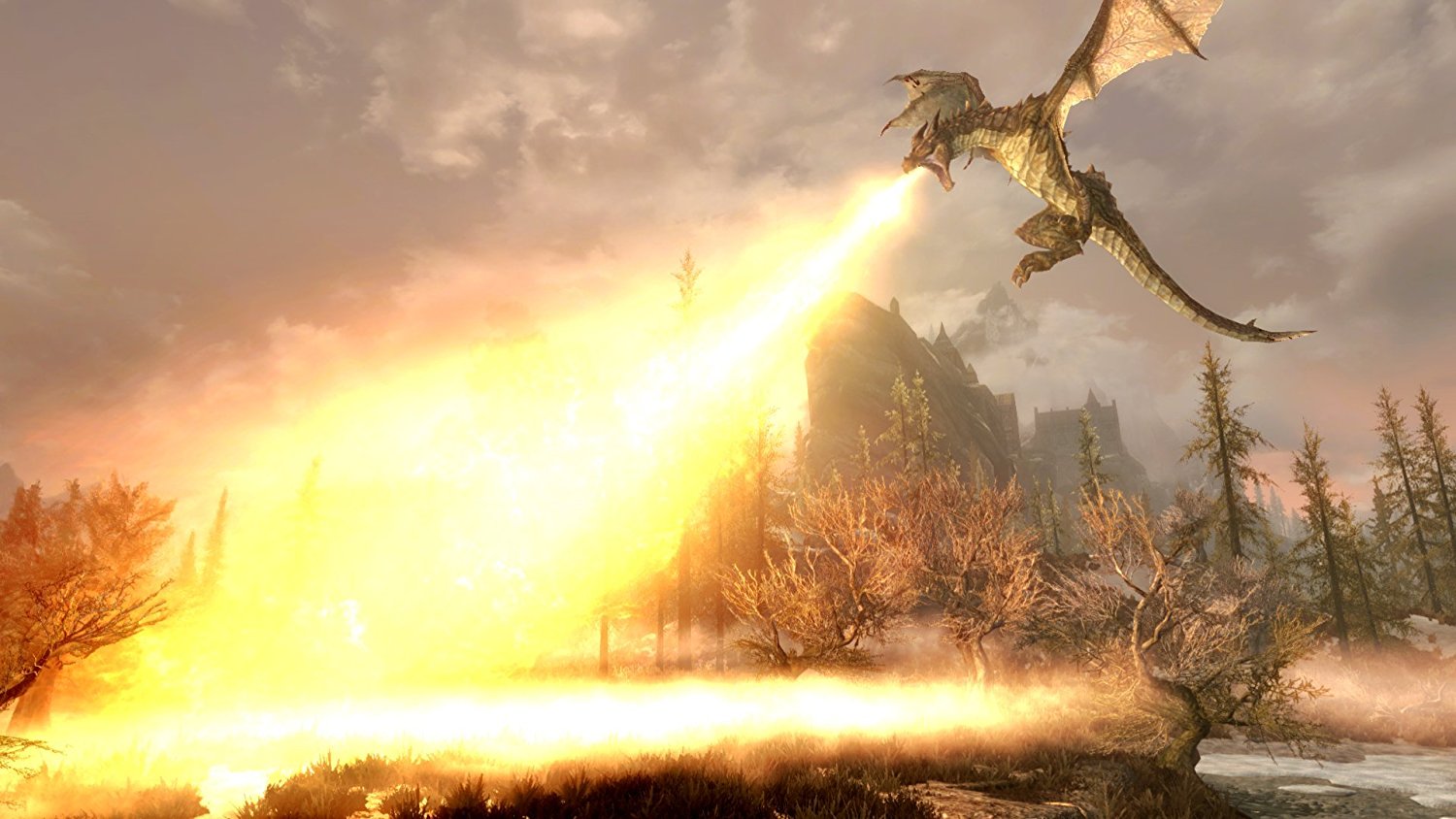 Being on a Nintendo console, motion controls have also been added. This is an addition that caused this author to cringe because since the days of the Wii there have been more motion control attempts that sounded better in theory than in execution and Skyrim doesn’t exactly break that track record. The motion controls aren’t the worst, and how the movements were implemented for lockpicking and archery are kind of cool, but the game just works better using the old fashioned control inputs. The best part about the motion controls is they are completely optional, and if you’re playing this on public transit, using the traditional control inputs works just as well without causing strangers to gawk.

If you’ve played Skyrim on other platforms you know exactly what to expect here. Aside from the aforementioned Switch exclusive tweaks, this is the same old Skyrim with the Dragonborn, Dawnguard and Hearthfire expansion packs included. For those who are visiting Skyrim for the first time, this title takes place in Skyrim about 200 years after the events of The Elder Scrolls IV: Oblivion. The story begins with the protagonist about to get executed because they somehow got caught up in the nonsense going on with the civil war between the Imperial Legion and the Stormcloaks. Lucky for them, a dragon attack turns the execution into a state of pandemonium and the player safely avoids death. 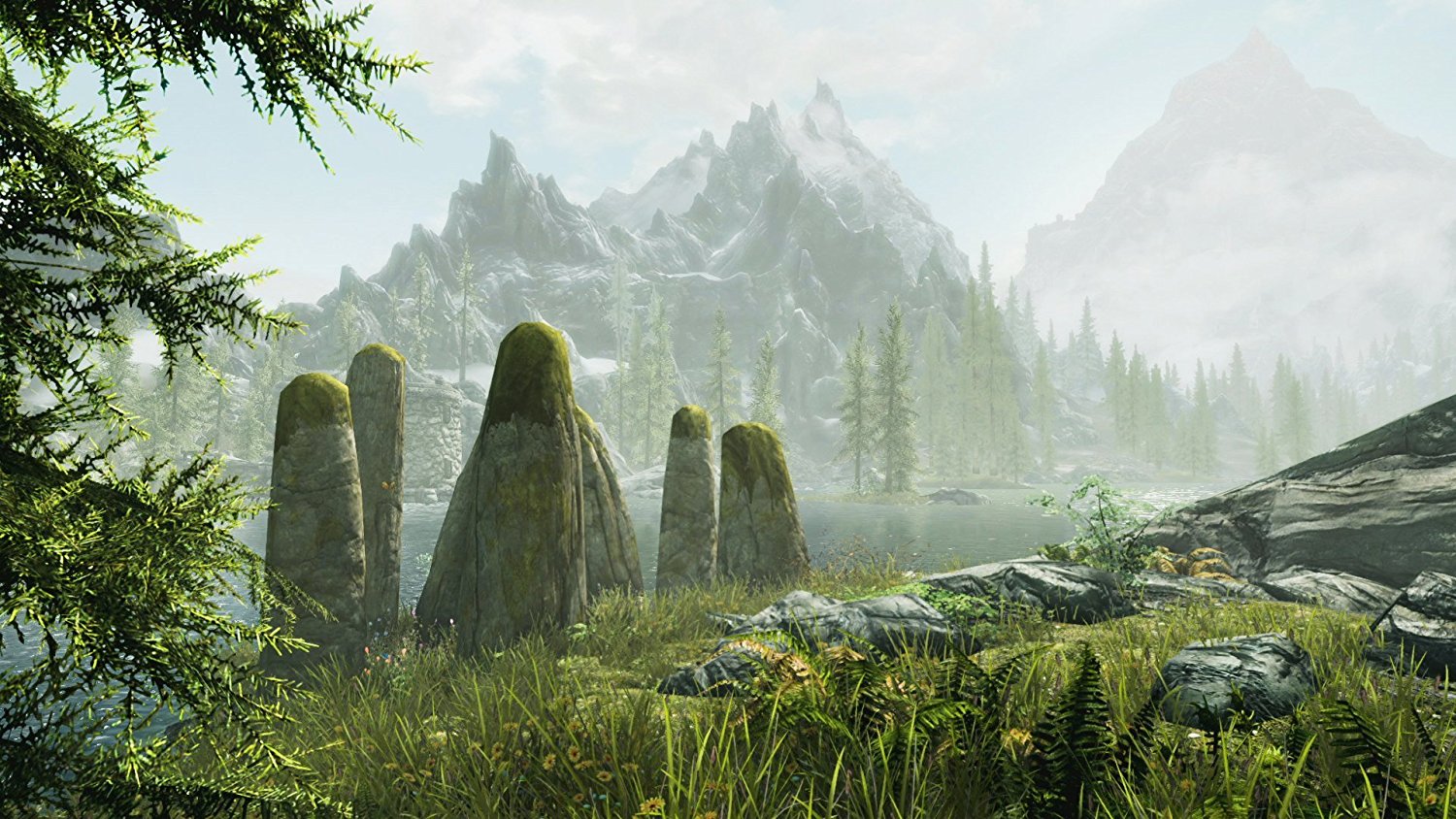 After dodging a beheading and incineration, the player is able to design their character and select the race from an assortment of different humans, elves, orcs, lizard-like Argonians and the feline Khajiit. Each race has their own strengths and weaknesses, for example the Elven races receive bonuses to different types of magic, the Argonians can breath underwater and the Khajiit have excellent night vision since they are part cat. There are no set classes in Skyrim, instead the player will level up the abilities they tend to use more. If they want to play as a magic user, they need to cast a lot of spells to get good at them. If they are of a more brutish inclination, they need to charge into batter and start busting skulls and taking hits. If they want to be more like a rogue type, they need to sneak around, pick pockets, and get good with a bow and knife. If they want to be a rogue like, they need to die a lot and drop all their items when they respawn.

When a player levels up they get a skill point they can distribute to any number of different abilities such as destructive magic, blacksmithing, lockpicking or one-handed weapons to name a few. This allows a player to put emphasis on the abilities they value most and gives them more control beyond just having to use a certain ability a lot to get good at it. Some of the more valuable perks require a higher level base level of the skill, for example a player is not going to be able to forge heavy armor from dragon bones when they have a blacksmithing level of 23. 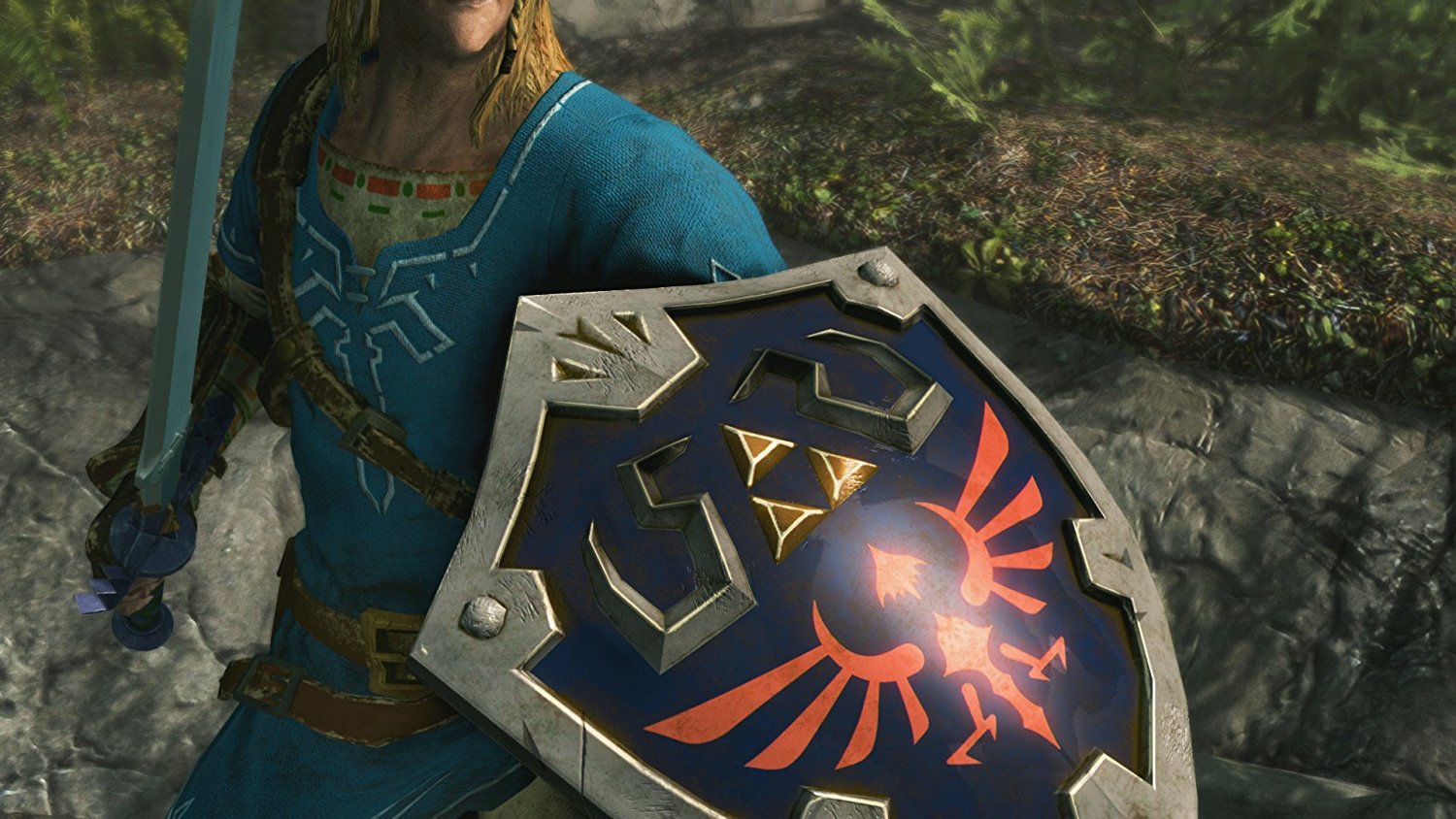 The world of Skyrim is gigantic, and there is a main quest that starts when the character talks to the Jarl of Whiterun which leads them to learning about their Dragonborn status and will lead them down a path where they will have to pick a side in the civil war, but this can be largely ignored for most of the game with all the available side quests and optional activities, and this is without even getting into the included DLC content. There are numerous caves to explore, items to fetch for people, guilds and secret brotherhoods to join, and a whole bunch of dragons to kill and absorb their souls. Skyrim is a high fantasy playground, with the freedom to choose the outcome of most situations.

Combat is enjoyable and another area where the player is free to basically do whatever they want. Without typical classes and the skill point system, some rather bizarre class combinations can be created. A standard I’ve gone with is a magic tank, which is heavy armor with a one-handed weapon and a spell in the other hand. Typically it’s something like Flames but having a summoned being to assist combat is always helpful. Or a nimble archer or more traditional magic using class is also available but players have the freedom to custom tailor whatever sort of character they want, whether it be something planned out to fit a favorite RPG class they’ve enjoyed playing or just going nuts and seeing what kind of weird amalgamation of class abilities they can Frankenstein together. 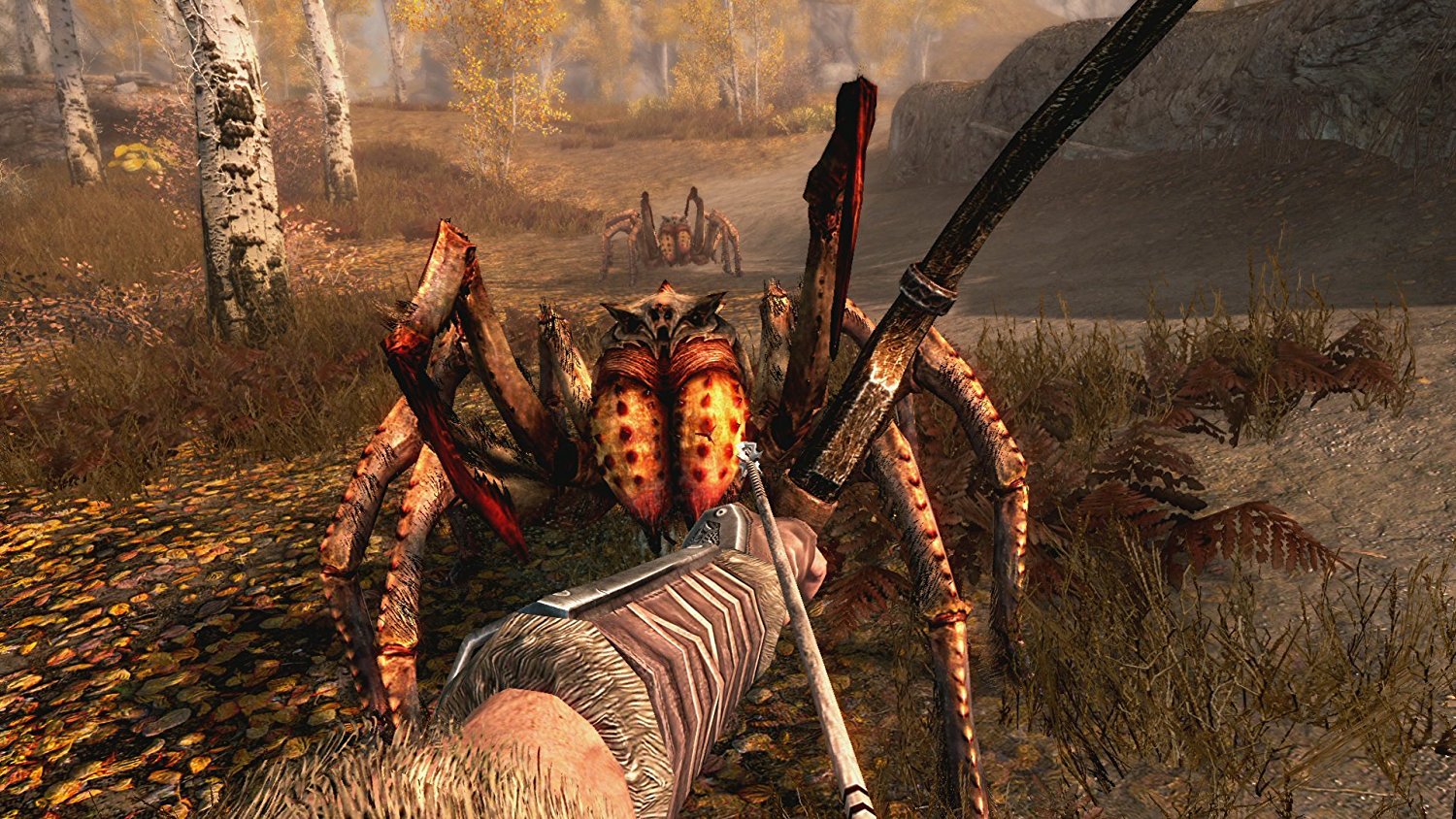 The Elder Scrolls V: Skyrim is an amazing game and this was never more true than in 2011. The 7th generation consoles saw the complete edition as a re-release and last year we saw it released again for the Xbox One and PlayStation 4. To Bethesda’s credit, this year’s re-release on the Switch and PlayStation VR (check back soon for that review) are at least offering some new variation to the game, but outside of people who play games exclusively on Nintendo consoles, the only real selling point with this incarnation is the ability to play it on a portable system. It’s a great game that holds up after six years, but it’s about time that The Elder Scrolls VI is announced instead of yet another release of Skyrim.