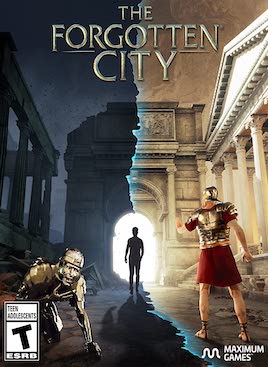 Australian developer Modern Storyteller’s The Forgotten City is, similarly to life, a lot like a box of chocolates: you just don’t know what you’re going to get. In the span of thirty minutes, one’s reaction to what the game delivers finds itself jolting both ends of the spectrum. From bewilderment in one moment, to satisfaction not so long after that. Pondering why the developer felt it necessary to include something so upfront, to delight with another aspect that’s thankfully left to player deduction. But it would be unwise to call The Forgotten City a bundling of different ideas that don’t mesh well in that regard. For all its occasional missteps and moments you can’t help but awkwardly double-take over, Modern Storyteller still rustle up the merit and quality with its core components to keep this more diplomatic form of adventure worthwhile.

Unraveling this vaguely “whodunnit” mystery involving an ancient (or in the context of the setting, modern day relative to the period) Roman city seemingly enclosed and isolated from the rest of the world. A city, more interestingly, caught in a time-loop. A loop your character unfortunately stumbles into and whose task primarily is to escape the far-flung era back to your own present time. But a secondary objective emerges — should your interest be piqued — and that is to find a way to rid the city and its citizens of the temporal prison they themselves appear to be completely oblivious to. Now yes, as we’ve occasionally mentioned in passing in the past, time-loop pitches appear to be all the rage at present, so even if one can’t place the blame squarely at the developer’s own feet, unfortunate timing it may be, The Forgotten City needs to have some compelling hook to help it stand out from the budding crowd. Not least for a game that, outside of a few quest-lines and brief instances, is entirely devoid of combat or RPG leveling up that would grant players any other incentive to invest in what the game offers.

Even its reputation as a once-popular mod for The Elder Scrolls V: Skyrim may not be enough. If anything, its original status as such has more chance at imbuing harm than necessarily benefit. The question then is how well have Modern Storyteller managed to unshackle The Forgotten City from its former “fan-made” attire into something more profound and stand-alone in identity. A game, primarily focused on investigative conversing with the citizens of the titular city, that makes this deliberate restriction on gameplay not just a neat feat, but one that can carry it through to any one of the four endings. The good news is that, on the basis of the actual conversations, Modern Storyteller manage to pull this off. For all the time you’ll spend in that familiar “conversation” perspective any fan of Bethesda’s back catalogue will recognize — a character’s near-expressionless face staring directly at you, any semblance of visible emotion on top, more jarring than it is genuine — if there’s one thing The Forgotten City gets right here, it’s the writing. 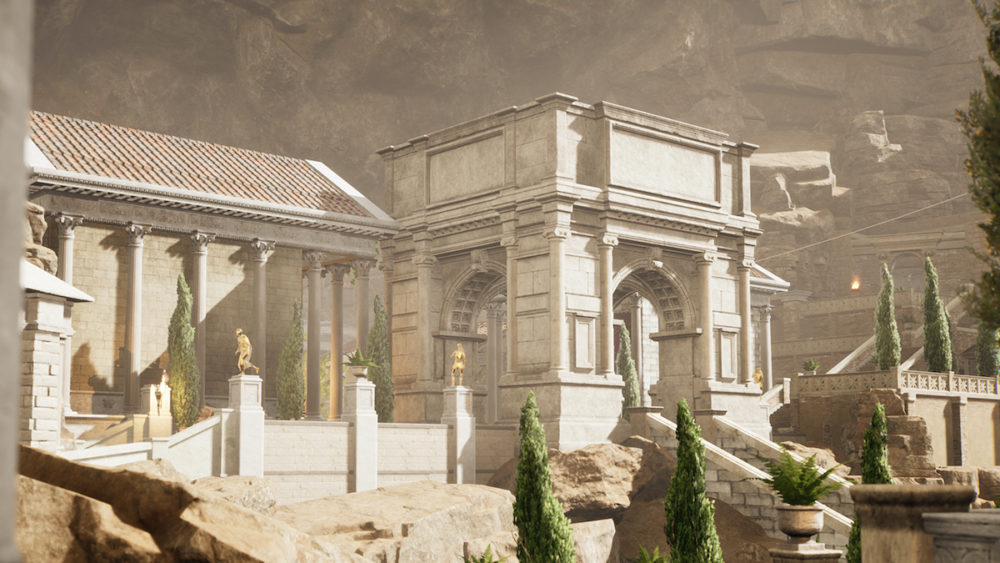 Not just in the sense how tidbits of both personal detail and expository world-building are sewn into the progression of conversations, but how Modern Storyteller are the kind of studio who understand why conversations have such a great impact in RPGs. How a tense stand-off — where one bad response could spell disaster — will almost always leave you genuinely pondering over which of the options is right for the moment. For a game of such confined scale and scope (in a level design sense), it’s surprising just how many of these scenarios dot one’s journey throughout The Forgotten City. And while this would be the point where I list a few of them, much like the story and especially its closing chapters, to reveal the manner at which they appear would too veer precariously into spoiler territory. But surely, is that not the mark of a game whose delivery is so effective that to give away even a handful of its key moments away would risk sullying the experience?

Granted, there are no RPG-like attributes that can help or otherwise hinder your efforts outside of a character stat you choose at the start of the game that can provide a bonus option or temporary skill in the world. But there’s no min-max’ing here; you can lie to a character, but that option isn’t governed by some numeric stat for example. Meaning that, sadly, one’s success in this area can feel a little more like a roll of the dice. But I’d be lying if I said that getting to the heart of each character’s motives and reasons for being, aren’t themselves enough of a spur to see some manner of closure on events. Especially if you’re vying for the fourth and final ending of the bunch. The one that the game itself even deems the “canon” ending. An ending whose main reveals and plot twists can admittedly overstep the mark into the ridiculous. Yet for all the momentary silliness, it still finds a way to readjust its focus to still deliver that kind of prolonged deduction on what manner of response or delving into a desired topic will bear the best outcome.

If nothing else, The Forgotten City does that admirable, likably-cliche thing of figuratively patting you on the back during the fourth ending’s epilogue. But it’s one you feel more than happy to accept; not least if it’s by way of already acquiring any one of the other endings and you can’t help but feel adamant you have to reach the best possible outcome. If not for the characters it introduces — which at worst, aren’t granted the screen time needed to properly invest in — then for the greater mystery still left to be discovered. And credit to the game (aforementioned detouring into the silly notwithstanding) for just about finding a way to weave together its prime focus on the mythology of Ancient Rome…and then some. The world-building and extent to which it focuses on Roman mythology for its backdrop is almost enough to distract players from its otherwise lesser-focus on its accompanying time-loop premise. 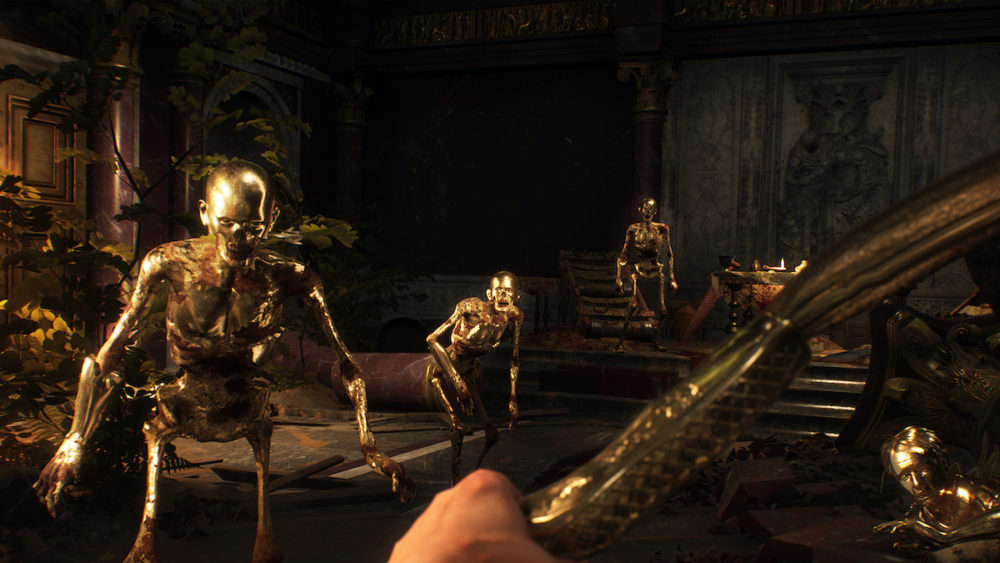 Understandable it may be, going in, to expect this to play a more vital part in a player’s investigation, the repeated-cycle progression does — the more you play — begin to sink a little into the backdrop. Only ever popping up as a proper gameplay tool, when the need to restart the day arises. Though disappointing it might seem to hear of its time-loop being more a MacGuffin than a core mechanical component, that’s not to say that The Forgotten City doesn’t find at least one or two interesting ways to encourage players to indulge in that looping cycle again and again. One of which is the fact that stealing anything in the world — be it money, personal belongings — or for that matter, committing any manner of sin, causes a littering of golden statues to activate and proceed to hunt you down. Your only means of escape is by enabling the portal you emerge from and starting the day again. The nature of this inability to sin, or as the game dubs it “The Golden Rule,” is a key part of the mystery and while the truth of its existence is on its own interesting enough, its brief dabbling into gameplay decisions, while not the most complex, is appreciated nonetheless. Should you decide to steal a a vital sum of money, you better make sure you have the quickest route back to the portal all planned out or else it’s a salvo of golden arrows and subsequent game over for you.

But as far as the other areas that could be considered additional gameplay, outside of its main dialogue engagements, The Forgotten City is horribly, at times laughably, unequipped to handle such a pitch. The game’s attempt at combat — worse, its rendition of “horror” — results in what are clearly the low-points of the game. More ironic given such cases often come upon your acquiring what is essentially a one-hit kill weapon, but whose “set-pieces,” if you can call them that, are straight-up laborious more than anything. The Forgotten City also suffers from technical woes on occasion and not just in regards to the apathetic look of most of its casts. A small irk is the fact that transitioning from one “level” of the world to the next can halt the game as its back-end clearly attempts to load the surroundings into play. But more pressing is the fact that on more than one occasion (be it amidst some foliage or even in an otherwise open plot of solid ground) you can potentially find yourself frozen in place — a bug I imagine — which requires loading a previous save. It’s not the most damaging issue, but even with how infrequent these pop up, it does sully what is still a relatively smooth performance over the span of roughly a dozen hours it may take to reach all four of the endings. 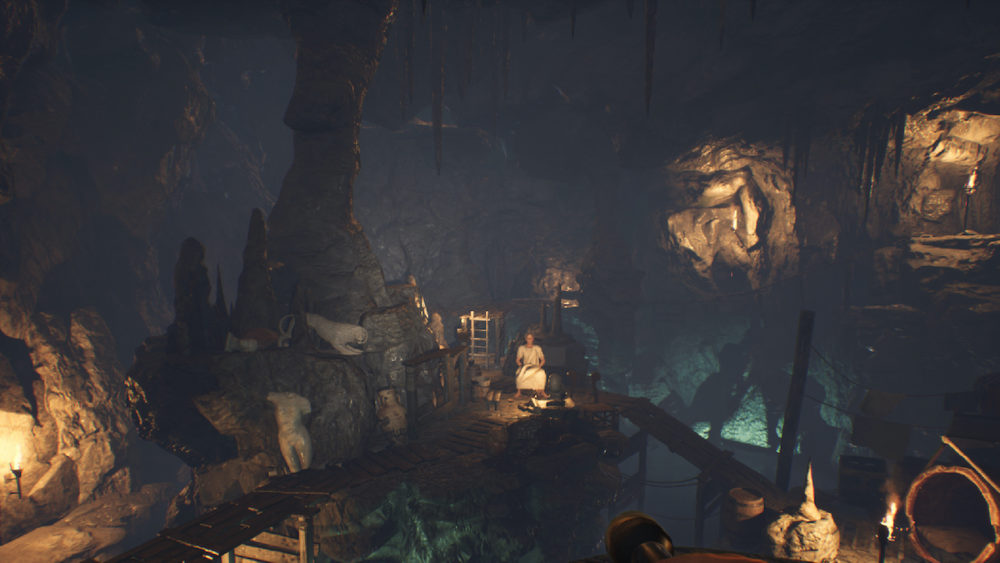 Clearly The Forgotten City is a game that speaks to those who revel in conversation. Those RPG fans who’d prefer not to fight or lash out, but converse and take a more steady, expository approach to finding a solution. It’s no exaggeration to say that the mythos Modern Storyteller both utilize and borrow from here is both surprising and satisfying with where it ends up heading. And while the narrative’s conclusion can come off too immersion-breaking or plain ridiculous for one’s taste, the caliber of writing for the most part is no less impressive for a game of this physical scale. The presence of its time-loop premise may fall too far back into the shadow, but as minimal its influence on moment-to-moment gameplay may be, the consolation is that it allows the writing to rightly take center stage. Its momentary combat segments are woeful in their implementation and there’s always a worry that another annoying bug or two can crop up when you least expect it. But for all its occasional grievances — that don’t add up to too much — it’s the intriguing mystery as much the appeal of its investigative leads across many a conversation where the strengths of The Forgotten City end up standing out most of all.