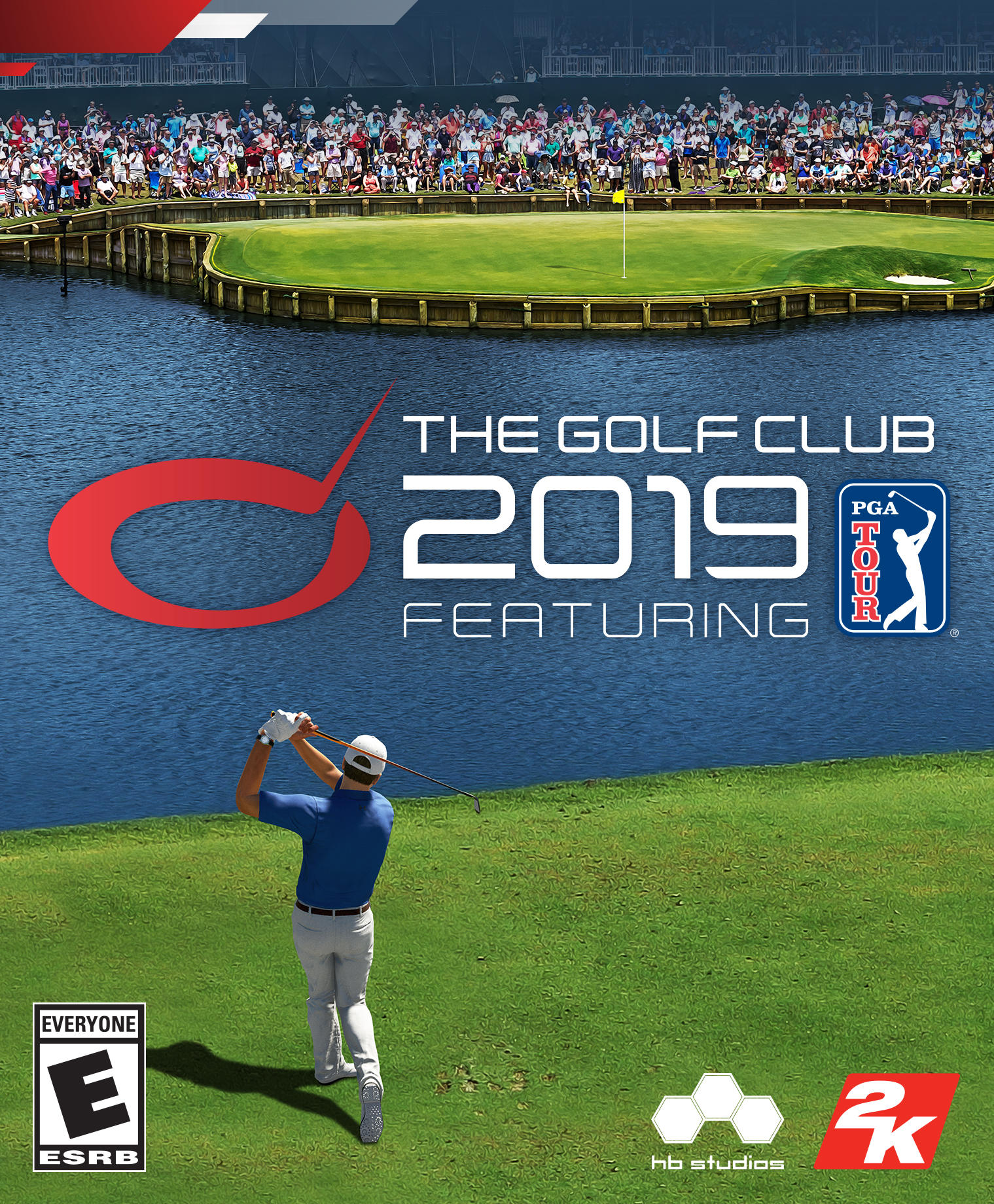 HB Studios was able to create a golf simulation from the ground up with The Golf Club. The game was driven by its design and customization aspect for courses to fill the void of an official PGA Tour license. The studio has now brought in the PGA Tour license and a slew of improvements for The Golf Club 2019. Players can participate in a PGA Tour Career Mode with real courses that were recreated properly. The game also allows previously created courses to be played and more to be created using HB Studios’ award-winning Course Designer. Does having the PGA Tour license, however, warrant the upgrade from the previous version?

There is clearly a market for a golf game as EA has basically abandoned its PGA Tour franchise. The Golf Club came around as an alternative at the same time that EA launched Rory McIllroy’s PGA Tour. The sandbox approach worked wonderfully has the golf mechanics were geared towards a more serious audience. This remains the same with The Golf Club 2019. The game of golf does allow to do backspin on-the-fly or take other such shortcuts. There are many ways to approach each shot such as choosing the trajectory for height or the type of shot rather it be a flop, chip, etc. The Golf Club 2019 has a wonderful opening tutorial to not only get you acclimated with how to play, but also to better understand the terminology behind golf.

Having reviewed The Golf Club 2019 on PC, players have two ways to play: controller or mouse and keyboard. Using a controller was precise in terms of accuracy. Swinging also judges velocity of the back and front swing. The shot chart in the bottom right hand corner provides indicators of where each swing needs to be to give the best possible shot. The game lacks a proper response to varied swings, however, meaning no matter how much or how little you put on a swing, you get no feedback or visual response. There is no type of vibration on hitting a ball from the controller. Also, each swing shouldn’t be rushed. The back swing in the game comes rather far back and there will be a lot of trial-and-error in learning the mechanics of the game. Judging the speed of greens can be rather difficult as you judge what the proper power of the putt should be. Granted, this will get better as you get better with the game, but something more approachable in the future should be considered. 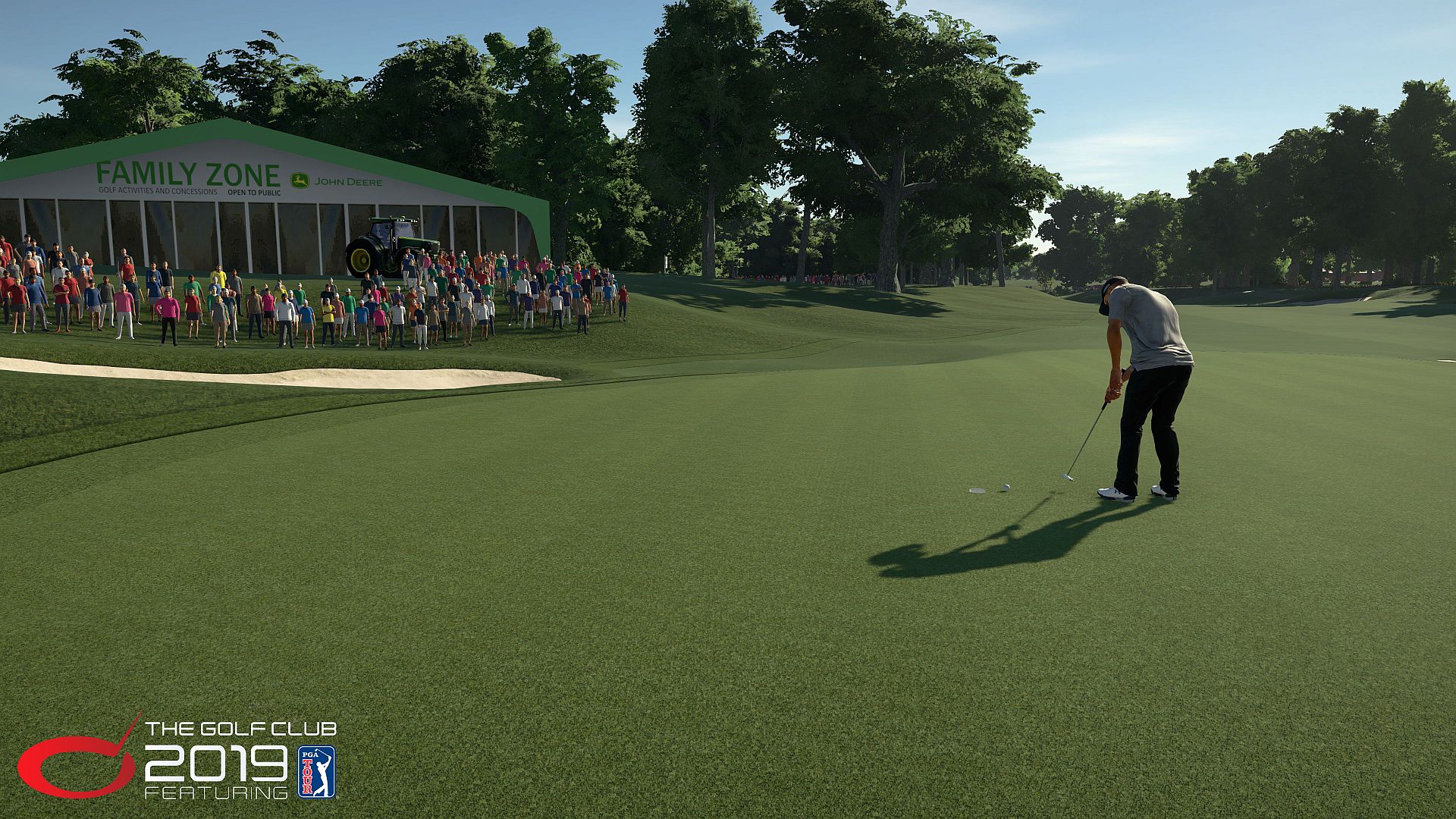 The most enjoyable (and difficult) approach to playing The Golf Club 2019 is using the mouse and keyboard. This is well-implemented into the game and brings back memories of playing Golden Tee at a bar. Navigation and commands are laid out properly with the keyboard and swings are executed by bringing the mouse towards you and propelling forward. This makes sinking shots even more satisfying. It’s harder to judge how hard your swing or putt is, but improving your golf game playing this way is so much more gratifying and could leave console players missing out.

HB Studios acquiring the PGA Tour license will make the game more approachable for fans, but there should be an asterisk next to the name. There are six PGA Tour courses. More are planned for the future, but these six are highlighted by TPC Sawgrass. The others include Summerlin, Scottsdale, Southwind, Deere Run and Boston. Currently, there is no Augusta National, Pebble Beach or St. Andrews. There are also no real PGA pros, so you won’t be starting out a match by selecting the likes of Tiger Woods, Rory McIllroy or Justin Spieth. 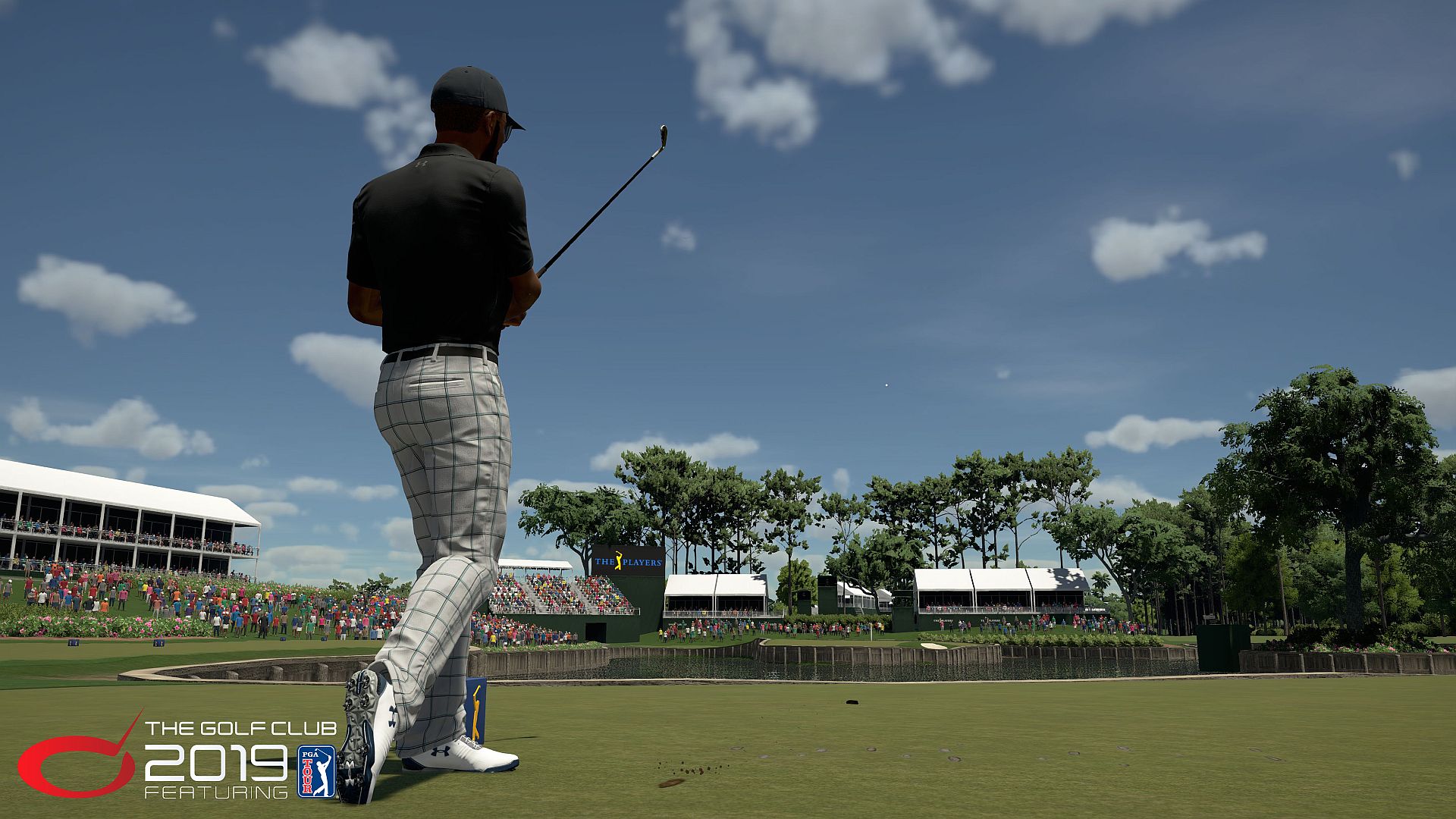 The PGA Tour Career Mode is a nice addition to the franchise, but ultimately lacks depth. As mentioned above, there are six PGA Tour courses in the game. That’s a problem when there’s a 32-course schedule. The rest are filled out with user-created courses. You will start your career in Q School and attempt to make your way onto the Web.com Tour and eventually the PGA Tour. You will play against random competition, although official rivalries can be formed in the game. It doesn’t mean nearly as much if it’s not with an official PGA Pro. Creating your golfer is limited as you will unlock more apparel in your career as you level up and earn sponsorships, but that is literally it for the Career Mode. Your attributes are preset and you cannot improve any actual golfing aspect of your player.

The Golf Club 2019 does include a good amount of other ways to play. HB Studios has added Skins and Alt-shot modes this year for variety. Players can play solo, locally or online with matchmaking or private rooms. Online Societies are the “Country Club” groups of the game as Presidents can set daily tasks or set specific criteria to join it such as player handicaps or a minimum score on a course. The game also includes team play, 2-4 player stroke play and head-to-head. Course Designer returns to the game and your previous courses can be imported. The Golf Club 2019 has added SpeedTree technology to help improve the overall visual quality of the game, so the old courses should see a bump in visual fidelity. The user interface for creation has been improved to help speed up the process of creation. Players can design and share these courses. Searching for the courses is done while choosing a course and offers a lot to sift through. Each course can be voted on after the game is completed. 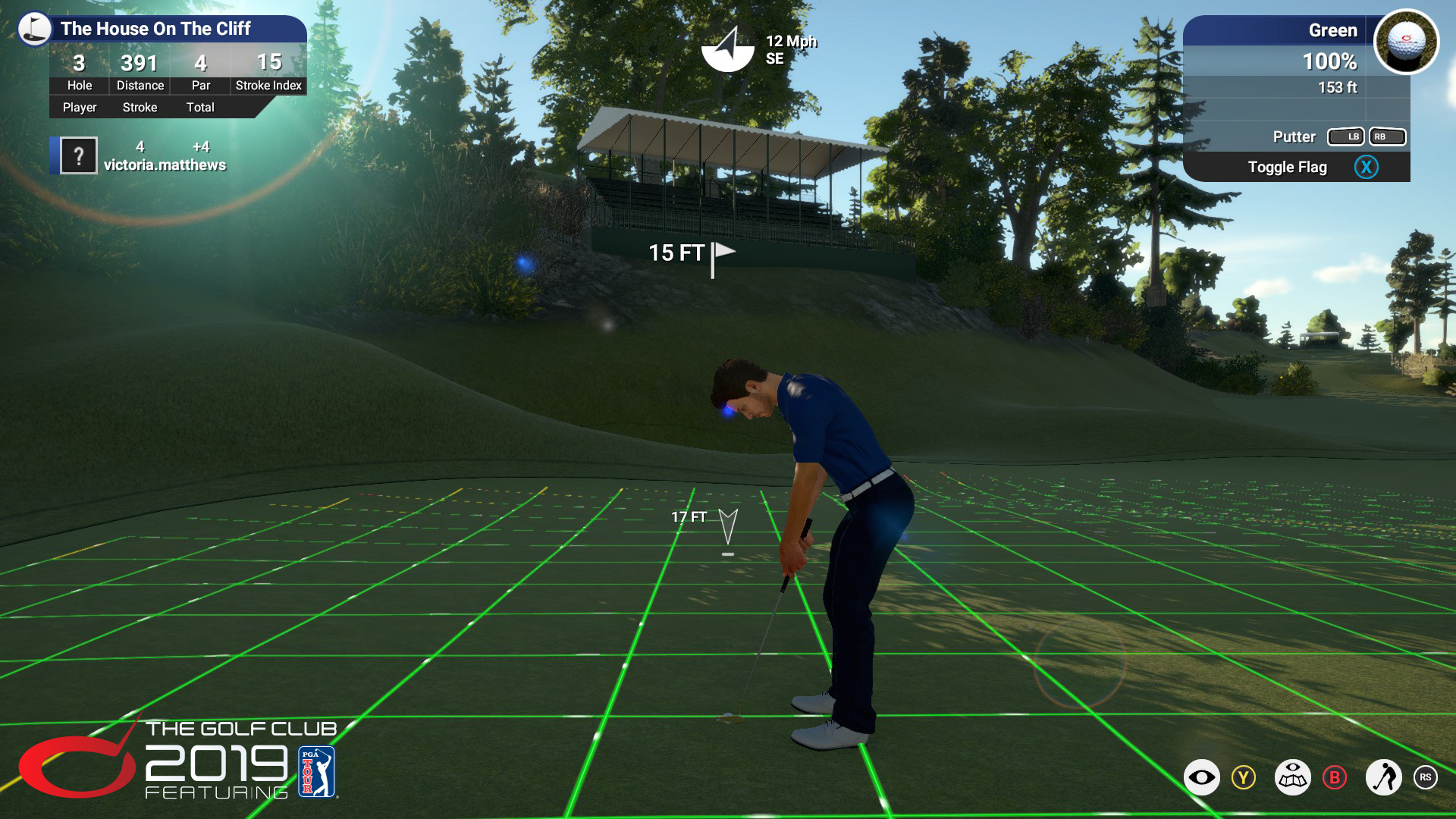 Visually, The Golf Club 2019 can look beautiful at times. The lighting and reflections are fantastic as HB Studios has implemented SpeedTree Technology. The game includes dynamic shadows so you may see the sun get blocked out from time to time. The colors of the greens pop and the crowd, while not extremely detailed up close, are responsive from a distance. Some of the courses suffer from graphical detail with objects off in the distance, but the courses and player model in-frame look good and a lot of this has to do with the lighting. HB Studios has also included a new PGA Tour presentation which adds to the golf atmosphere the game creates.

HB Studios has done a magnificent job of properly creating a golfing atmosphere. Everything from the ambient noise of nature to the soundtrack screams golf. Crowd reactions are solid with nothing detailed and the announcing is comforting enough albeit repetitive. There’s a small intro before each match as well. The overall sound dynamics help complete this golf simulation experience. 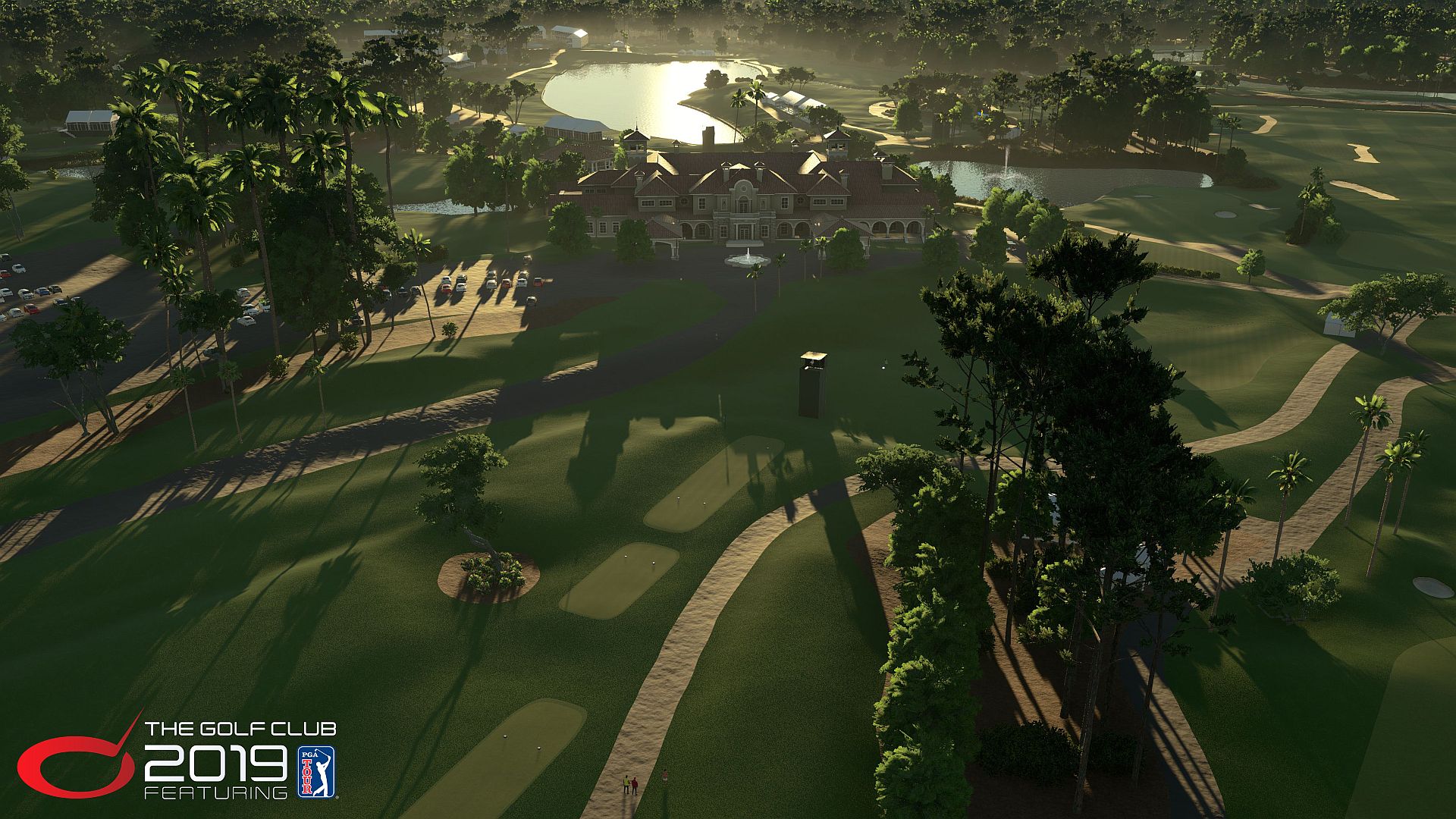 Much credit should be given to HB Studios for what it has done with The Golf Club franchise. The Golf Club 2019 brings improvements to the table including the PGA Tour license and a Career Mode, but that should be taken with a grain of salt as these features are severely lacking. The most important aspect of the game is that the golf mechanics and atmosphere are great, even though the gameplay could be more approachable. With 2K now producing the game, things could change in the future for the franchise, and more courses will be added at some point. The Golf Club 2019 features a lot of positive and raw aspects with potential.