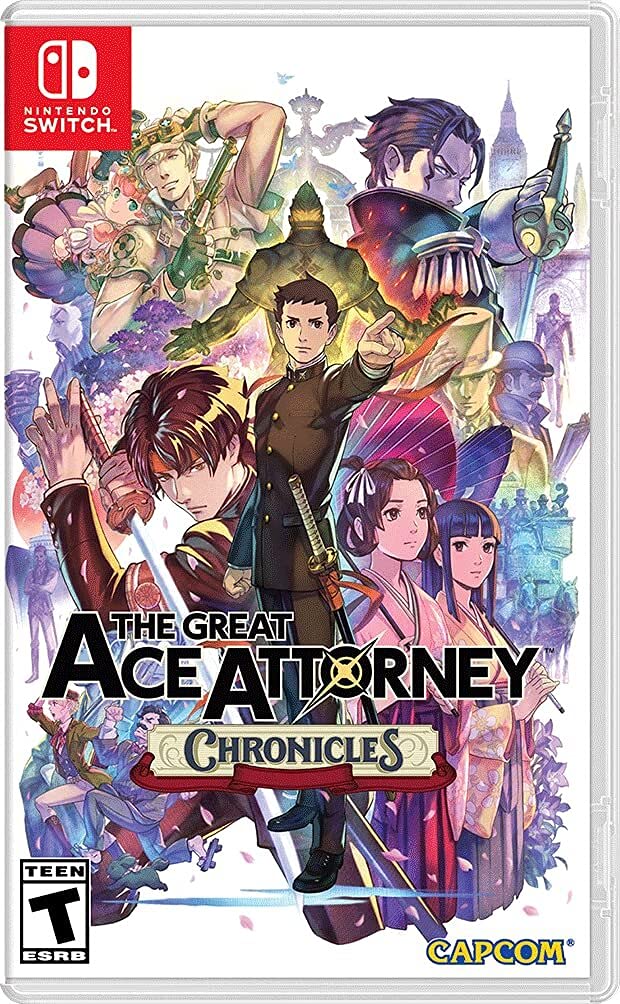 Just a little over six years ago The Great Ace Attorney first released on 3DS in Japan. It would be two years later until its sequel saw release as well, but most fans of the Ace Attorney series were just hoping the two would eventually make their way to becoming localized. Time passed and there seemed to be no word on the topic, keeping fans pondering if it would ever come to be. Then finally after over five years Capcom unveiled that it would at last be releasing the duology worldwide on multiple platforms, localized for even more languages to finally get to experience the prequel. Now that we’ve finally gotten to experience the stories they set out to tell, it’s clear that The Great Ace Attorney Chronicles is worth the wait.

The Great Ace Attorney Chronicles takes place during the late Victorian era, quite a long way before the iconic Phoenix Wright would ever take his first steps into the courtroom. It mainly follows the story of Ryunosuke Naruhodo, a young Japanese man whose best friend Kazuma aims to become a great lawyer by traveling to London and learning more of their court system. After finding themselves in a murder case, the two alongside a young judicial assistant by the name of Susato Mikotoba sail off to Britain to study more about being a great defense attorney. Along the way Ryunosuke finds himself in the audience of another “great” himself, a detective by the household name of Herlock Sholmes who meddles in cases while trying to solve them with rather unique methods. Like it or not, he’s someone Ryunosuke finds himself running into quite a bit and is often helpful, if not a troublesome person. Herlock also has the company of the young Iris Wilson, a genius writer and inventor who keeps Sholmes in check and listens to his various adventures he takes on as the great detective that he is. The two titles included in this release follow one another chronologically, with the second picking up a couple months after the last left off so they are of course best played in direct order.

Across the Ace Attorney franchise there are two main types of questioning and puzzles players will come across. The first and more important are the court cases, where the general meat of solving a crime takes place. Here Ryunosuke takes up his role as defense attorney and defends his client using evidence given or gathered throughout each case. At its core this is similar to the previous entries in the series, but things begin to take a turn when getting to the witness testimonies. These are where some of the first major changes between Chronicles and its predecessors appear. The main key difference is players are often not listening to one, but multiple witnesses at the same time. Often it’s just a simple back and fourth, but throughout cases characters may say something that gets a reaction out of another wherein Ryunosuke is able to turn to them and gleam more information. This makes for a wonderful back and fourth, in addition to creating a more actively engaging testimony segment than simply pressing and presenting evidence. The even bigger change, however, comes when Ryunosuke is finally able to step into his first British court case. 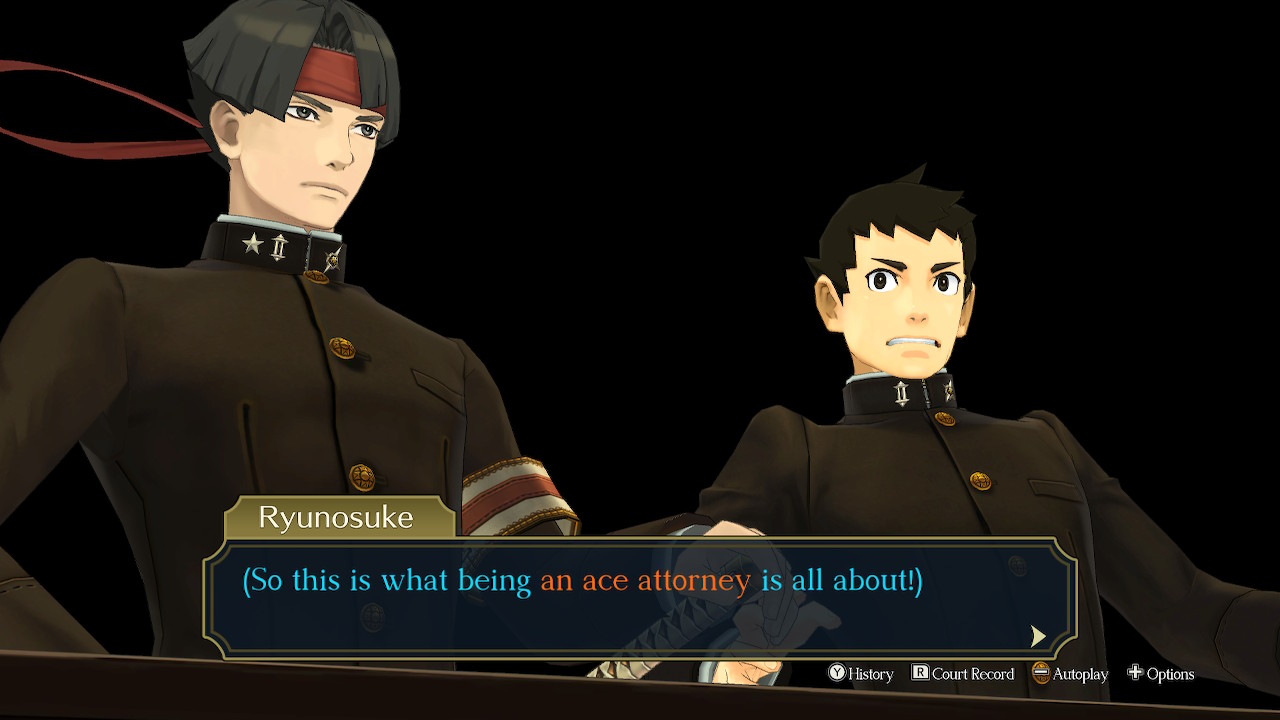 Perhaps the largest change to the court segments takes place when in British courts while playing. This is where the defense must not only plead to the judge, but also the brand new Jury that makes up six colorful characters. These six are able to, throughout the case, give guilty or not guilty verdicts to tip the scales. Should all six choose to vote guilty it might almost seem as if the jig is up, but fortunately there’s a chance for redemption. Often times the jury will come to their decision hastily without fully hearing everyone out, so if they vote the defendant guilty, Ryunosuke is given an opportunity to sway them with a Jury Examination. This allows him to hear the Jury’s reasoning for their decisions, and point out flaws in their logic with one another. If he’s able to get at least four to change their opinion, the court case can continue and give him another chance at victory. This is key to trying for a not guilty verdict as the jury is not necessarily all that smart so it will take a stern logic talking-to in order to progress things along smoothly, but fortunately it’s fun to learn more even about the very jury Ryunosuke must deal with.

Court is all good and well, but the other main source of puzzles in the series comes from the very investigation elements themselves. These come in the form of exploration, allowing Ryunosuke and friends to explore, examine and delve deeper into conversations with people around them to gleam information. Gathering items, whether in or out of court, allows them to be examined and learn more information which is vital to uncovering some of their true nature. The biggest new part in Chronicles, however, comes from the great detective himself, Herlock Sholmes. While he may be a great detective who comes up with the right concepts, he’s often a tad off the mark. Throughout the story at various points Sholmes will make his self-proclaimed great deductions about the situation at hand. These are usually rife with flaws and contradictions that don’t make sense, but fortunately Ryunosuke is quick to notice things aren’t always right. After he’s said his piece, Ryunosuke begins his course correction in which he re-examines each situation and finds the real flaw Sholmes was looking for in order for the proper deduction to be unveiled. In addition to clever visual puzzles, the investigation aspects are nice and tightly built. Where the original trilogy suffered from feeling bloated and often vague on where to go, Chronicles points players in the correct direction to let them know where to investigate without a ton of back and fourth. 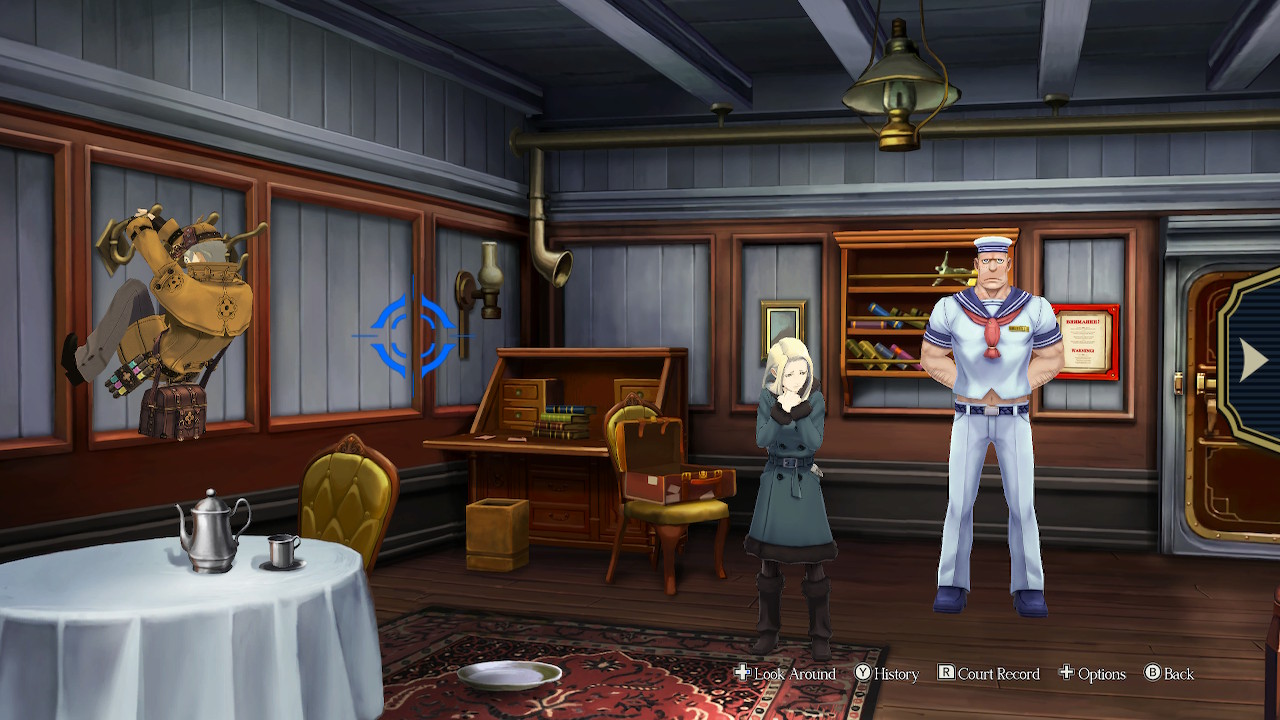 It’s well known now that Ace Attorney as a series went under leagues of localization changes in its various releases prior to Chronicles. Namely many of the characters in order to help carry over puns and various puzzles that might be confusing to western players without knowledge of Japanese. Chronicles handles this well in a way that makes it feel authentic to the original vision while also still being a fantastic localization effort. The big key element ties into many of the main characters themselves who are Japanese, in addition to lots of writing that instead of simply changing the Japanese characters to English, has simple subtitles or characters explaining what it means when examined. There’s also a major element of both racism and sexism throughout the story against the Japanese and female characters, which can be uncomfortable at times to read through, but is still handled in such a way that it does not feel unnecessary and instead feels like it belongs as an element the characters must push to overcome in an era that’s against them much of the time.

The visuals in Chronicles are clean, with tons of details in the backgrounds making up fantastic backdrops. The characters are fantastically animated with every expression being screenshot worthy and just a delight to see. The 2D portraits, when used, are great stills that also bring a lot of detail to the characters during certain moments. There’s also the 2D segments which are well animated with a unique style that make them stand out when compared to the others used in previous Ace Attorney titles. The voice acting is well done for every character across the board. The music also remains true to the series as some of the most fantastic themes that make every tense, humorous or tender moment that much more impactful. It may be one of the best Ace Attorney soundtracks to date with themes that are just wonderful to pause and listen to, but it’s hard to compare each amazing soundtrack to one another. 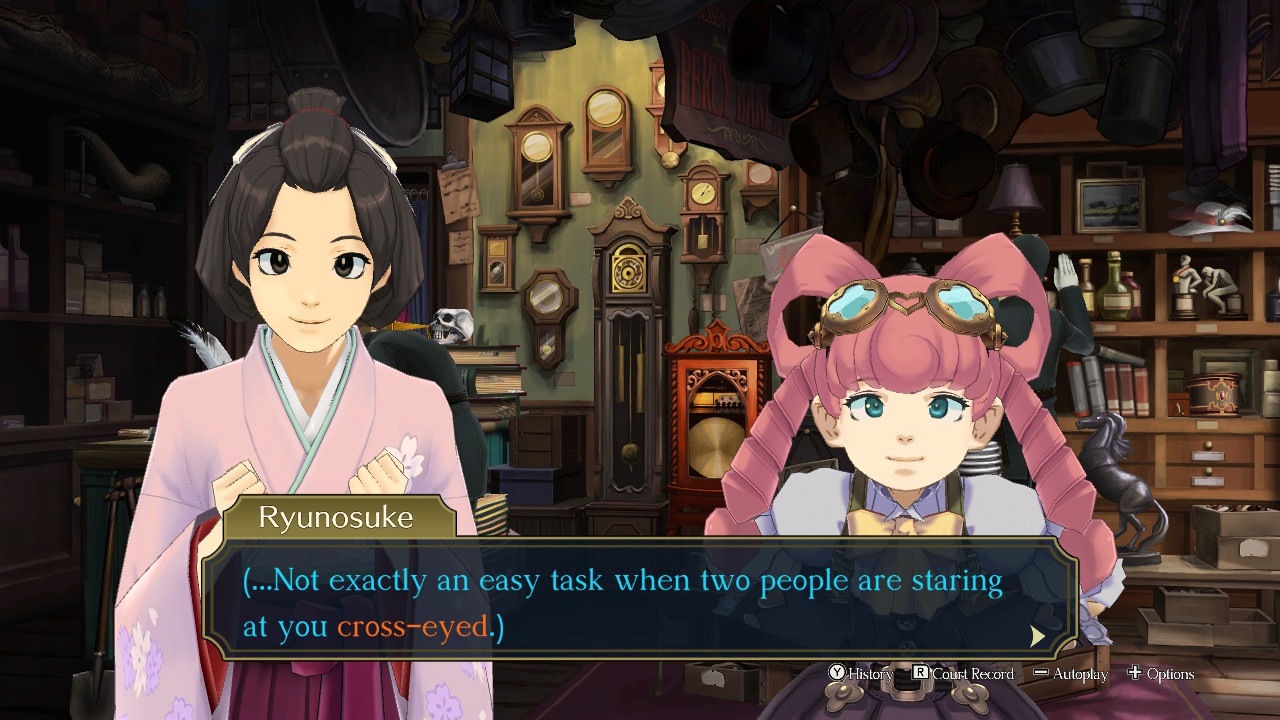 There are many titles like The Great Ace Attorney Chronicles which never get localized for more fans to enjoy, and although it took six years, it’s safe to say it was worth waiting for. Perhaps the best part is regardless of one’s history with the series, anyone can give this entry a try as it’s a proper prequel that requires no prior knowledge in order to dive into right off the bat. The characters, writing and puzzles are all a joy from start to finish and it’s another two entries into the series that will be fondly remembered for years to come. Anyone who has wanted to experience more after the original Trilogy or is just looking to dive into the series for the first time need look no further than The Great Ace Attorney Chronicles.