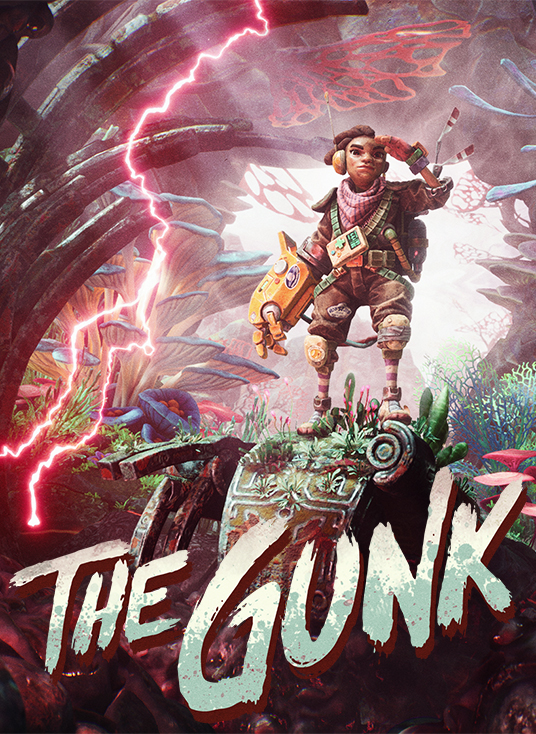 If there’s one thing that will be as true in the future as it is today, it’s that space is expensive.  Even a beater like Becks and Rani’s ship Dust Bunny costs an arm and a leg, and they’re not exactly rolling in cash and fuel.  A wasteland planet kicked out an unusual energy spike, so while it doesn’t seem likely anything is there, a combination of hope and desperation cause them to land anyway to see if there’s something worth harvesting.  But why is so much of the planet covered in a pulsating goo?  There are a good number of mysteries lost in the planet’s past, and the only way to figure them out is to explore every inch of the world of The Gunk.

The Gunk is a sci-fi action platform adventure not so much about cleaning up a planet as discovering what it is that’s being covered and suppressed by the sticky gross mass feeding off its life force.  Of the Bunny’s crew, Becks is the practical one keeping everything running while Rani is more exploratory, and the game opens with her being dropped off to find a suitable landing spot.  While Rani has two good arms one of them ends in a massive orange robot hand she’s named Pumpkin, and although a little bit broken for finer grasping work, it can still vacuum up pockets of gunk. Interestingly, when the gunk is cleared the local plant life springs back up, changing the desolate hellhole into a lush, beautiful and mostly-fungal jungle.

It only takes a little tutorial-level exploring to find a good landing spot for the Bunny, and with a base set up Rani can now make use of the ship to upgrade her robo-arm.  Pumpkin’s vacuum is good for more than just gunk-eradication, and can also hoover up the resources necessary to add new abilities to it.  One of the core functions from the start is a scanner, used to identify non-interactable plants as well as useful resource deposits and eventually enemies, and each scan fills up a section of meter, that, when topped off, opens up a new upgrade that can be installed back at the ship if only Rani has enough materials.  Finding enough to make everything involves the other half of The Gunk‘s gameplay, and that’s the platforming exploration. 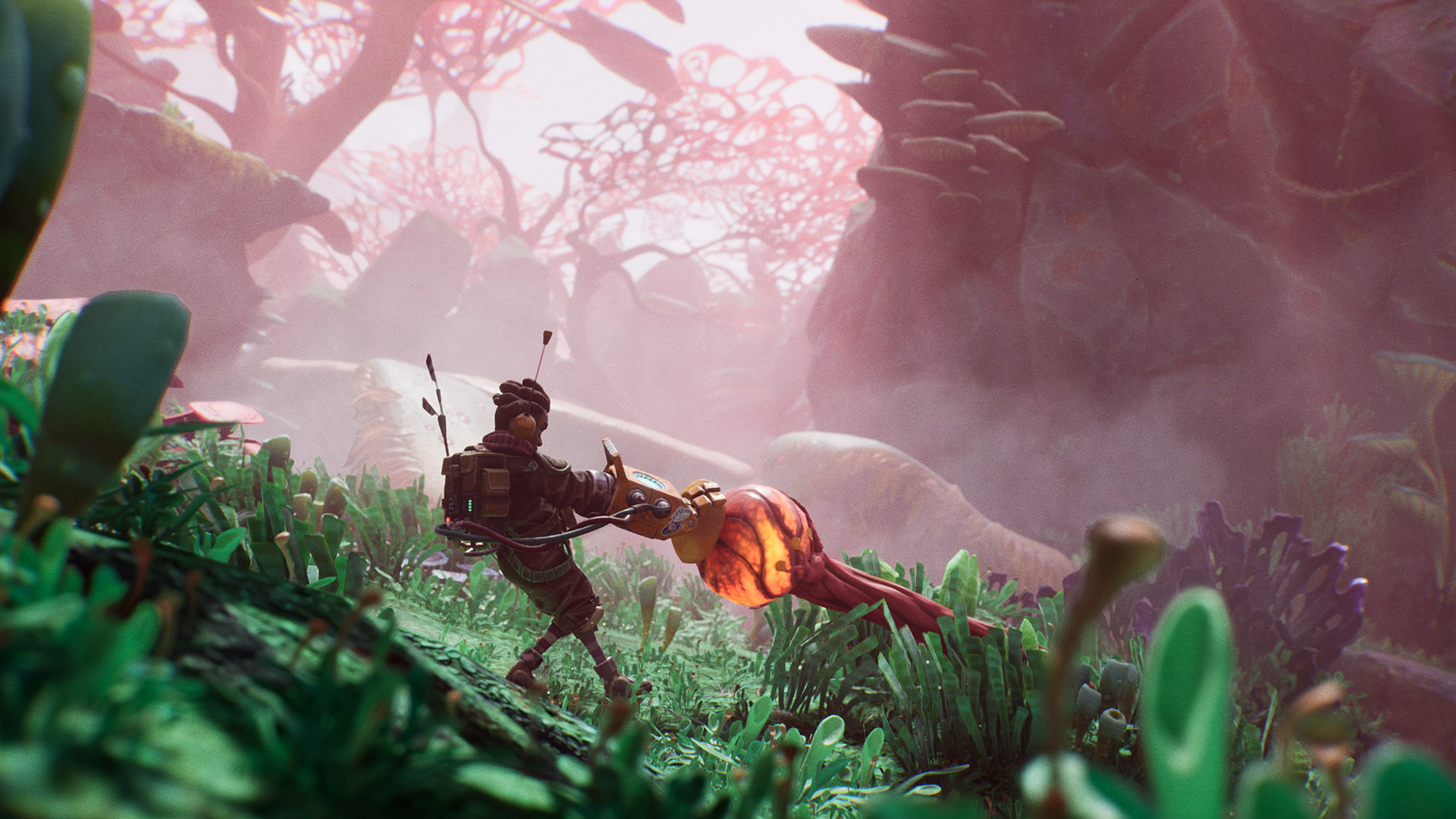 Getting through the world is for the most part the standard run & jump gameplay you’d expect, but clearing off the gunk means that the plant life opens up the way forward plus hidden areas.  Low-growing mushrooms give just enough height to reach a formerly out of reach area, vines let Rani climb sheer walls and open up shortcuts in each level, and pods can be tossed into glowing green pools to sprout multi-limbed fungal platforms up to new areas.  Part of the discovery of several areas is exploring enough to find those pods, then figuring out a way back to the pool.  While none of the platforming is particularly challenging, the world is always interesting enough to make exploring its nooks and crannies enjoyable.

The problem is that, while enjoyable enough, the gameplay never gets really good.  There are some strong set pieces that are visually impressive, and it’s always nice to trek down a side corridor and be rewarded for exploring off the beaten path, but most areas can be solved merely by being slightly observant.  The same holds true for the combat, which has more tools than are ever really necessary to clear out an area.  The gunk itself never does much more than pulse and eventually blob-blob-blob through the air, but Rani’s robo-arm makes quick work of it whether stationary or not.  The little gunk-critters are more of a problem, and are eventually joined by explosive-pod-spitting turrets, but even including the two boss fights there was a total of one area in the whole game that required much in the way of tactics and planning.  The reward of seeing an area spring to life after being cleared of the gunk never got old, and the actual process of sucking down the gunk while dodging gunk-critters wasn’t un-fun, it never felt like much more than a not-unpleasant activity.

Everything else, however, is just fantastic.  The world of The Gunk is a beautiful place, from the opening wilderness to the ruins and more spoilery locations beyond, and the story was one I wanted to reach the end of.  It isn’t explicitly stated as to whether Rani and Beck’s relationship is as a couple or partners but even so, they share a closeness that feels believable despite how different they are.  The tensions that are pulling them apart are understandable, and not being helped any by a planet in need of rescue by a pair of explorers who simply can’t afford the expense.  It’s not the most epic tale ever told, but The Gunk has a good heart beating at its core, and that makes up for a lot. 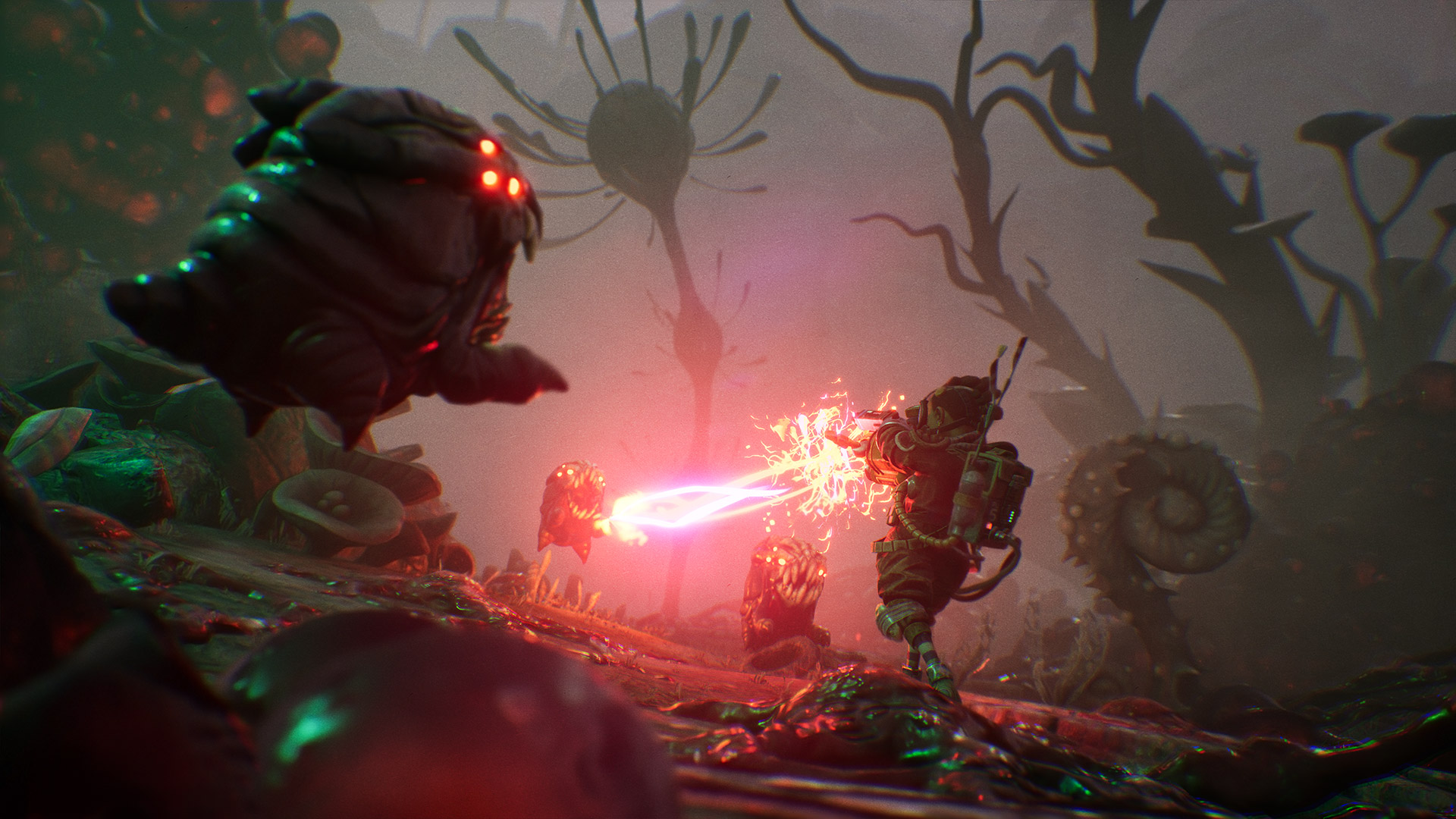 There’s a lot to love about The Gunk even if the core gameplay rarely rises above being pretty OK.  It’s a good adventure through a unique and pretty alien world, filled with character and life.  Rani and Beck are a good team and their dialogue is great fun, even as the pressures mount on their relationship.  The story of the alien civilization makes sense, and it’s good to play a game where the mysteries have clear solutions rather than get lost in heavy-handed world building.  If the platforming and combat had lived up to everything else then The Gunk would be top-tier gaming, but even so it ends up being a playable adventure that will keep you invested to the final credit roll.