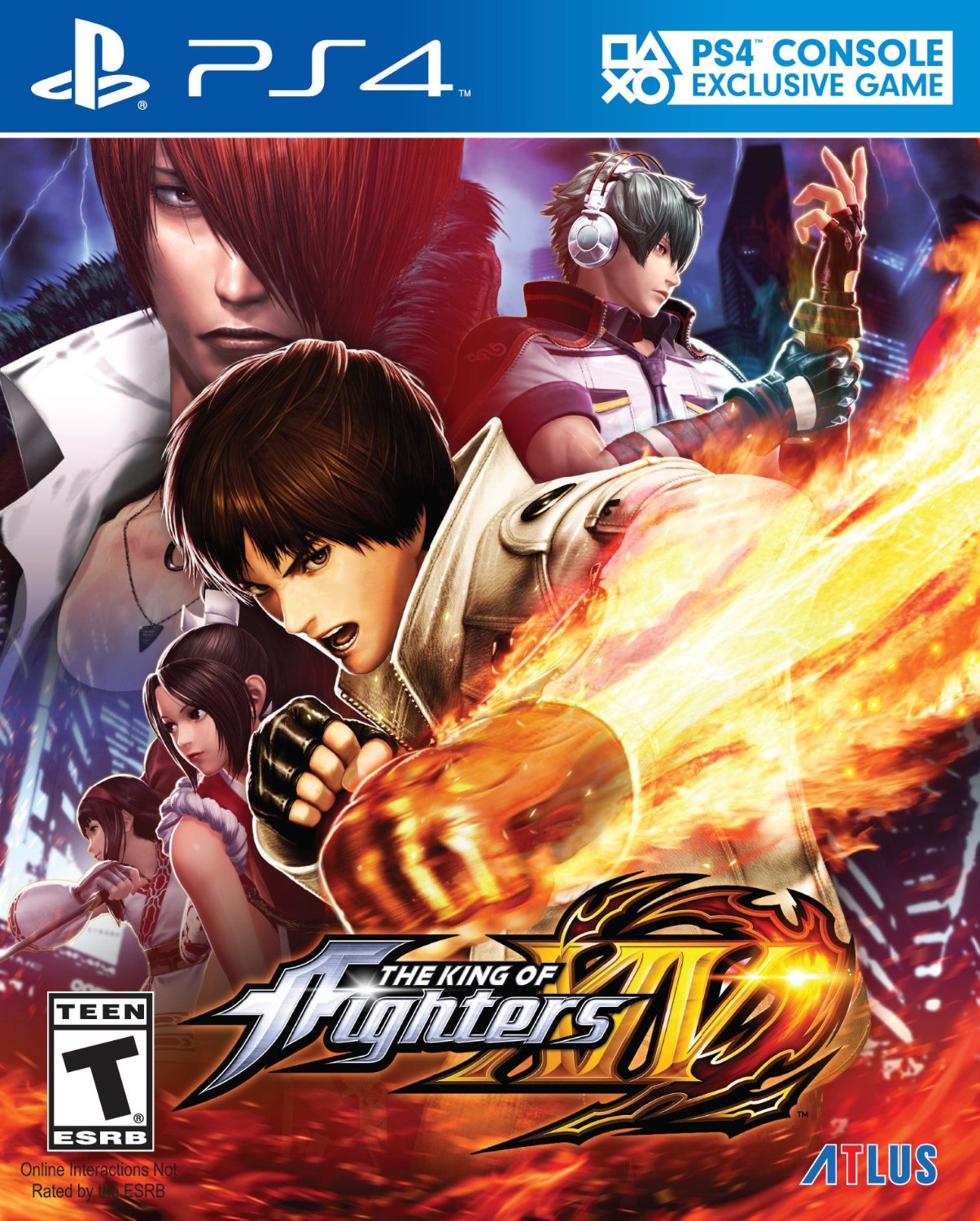 Since 1994, the King of Fighters franchise has been SNK’s crown jewel. It’s had many ups and downs in that time, reaching great heights with highly-revered entries in 1998 and 2002 and low points with King of Fighters XII. Many were baffled when the visuals were shown to change from the lush sprites used in previous games to 3D models akin to the Maximum Impact sub-series in King of Fighters XIV. It’s the first mainline entry in the series to use 3D models, but retains the 2D fighting plane. The core gameplay mechanics have been tightened up and the super move system has been revamped as well. A new era begins with the story as well, showcasing an all-new villain.

A super-hairy and blonde tan man named Antonov is the King of Fighters and even has a fancy championship belt declaring himself that. In a move a bit out of Dragon Ball Z, however, we see that he’s really insecure and a bit like Hercule/Mr. Satan from that series in that regard. He’s a bit of an arrogant bastard and demotes his president for defying the smallest order. Still, you can tell he’s fairly harmless and just has a big head from all of his success. The cutscenes within the story mode are amusing and the usage of Japanese audio with English subtitles works well. Some are text-only and deal with the in-canon conflicts characters have, which make those particular battles stand out more. You’ll get amusing nods to the franchise’s past and that adds an extra layer of fun for long-time players.

Newcomers have little to fear, though.  This is easily the most user-friendly entry in the series, with a well-crafted tutorial mode that guides you through every major mechanic and then shows you how to chain all of those things together to master them. It begins with simple things like movement and dashes before evolving into a detailed explanation of the various special states you can activate with button combos. Fortunately, some can be activated with just one button press thanks to shorthand commands — akin to the Virtua Fighter games tying a couple of buttons into one shoulder button. 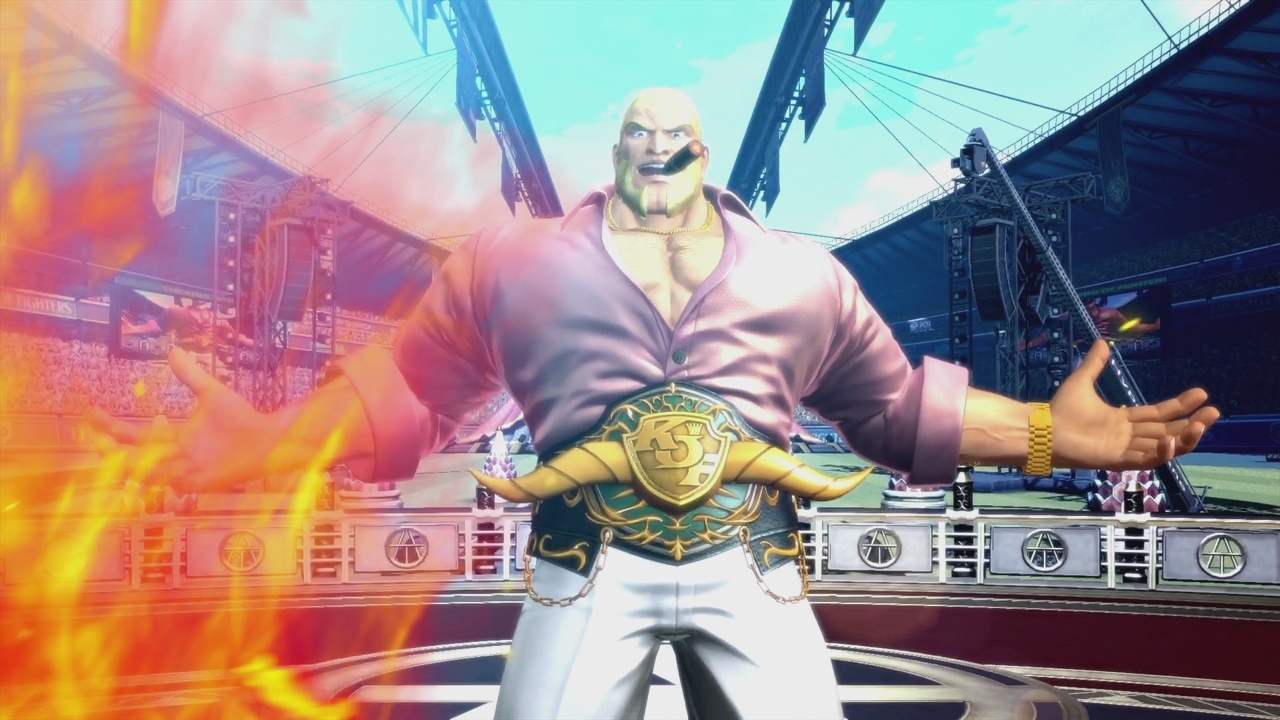 This shortcut activates Rush mode, which doesn’t give you a little red robot dog to help — instead, it boosts your attack power for a limited time. You can do special variants of regular attacks and special moves and then link other attacks off of these. Max mode is one such thing, but requires intricate button combos to enact — so while you can daisy chain things together, it isn’t like turning on the stick-only controls in Capcom vs. SNK 2 and going to town. You can obtain great power increases, but you have to work for them. Three super move types are also available, and will require varying degrees of dexterity to pull off. Your usual super specials are the easiest, and least-powerful of the bunch. They usually just require more stick movements and an extra button press to enact, while the more advanced Neomax and climax moves are much harder to pull off.

These are the kinds of moves will will probably want to use to either wow your friends locally, or ensure victory online. Offline play is included, but limited. However, much like the launch version of Street Fighter V, the core content of what is included is very high-quality and worth your time. Players can enjoy the story mode, where multiple playthroughs will be rewards with unique dialogue boxes. You can also sharpen your skills in a variety of training modes, put yourself to the test in the survival mode, or see how efficient you can be by tackling the time attack mode. Those seeking a more arcade-like vibe for the game should either get a fight stick or look into stick extenders. They may be largely made for FPS games, but the KontrolFreek SNIPRs do work very well at replicating how you would hold an arcade joystick and give you a far greater range of motion.

The franchise is known for being fast-paced, but never overwhelming — and that trend continues with this entry. No matter which character you choose, you’ve got a wide variety of options. Some are going to be perfect for those who love playing as big brutes who do a ton of damage — but attack fairly slowly. Some prefer characters like Mai who are lightning-fast, but don’t do a ton of damage with each attack. Of course, you have all kinds of characters in-between and the ability to try out three characters within a single match if you so desire. There’s a ton of variety in the roster, and veterans will find a good mix of well-known characters to enjoy alongside a few newcomers. 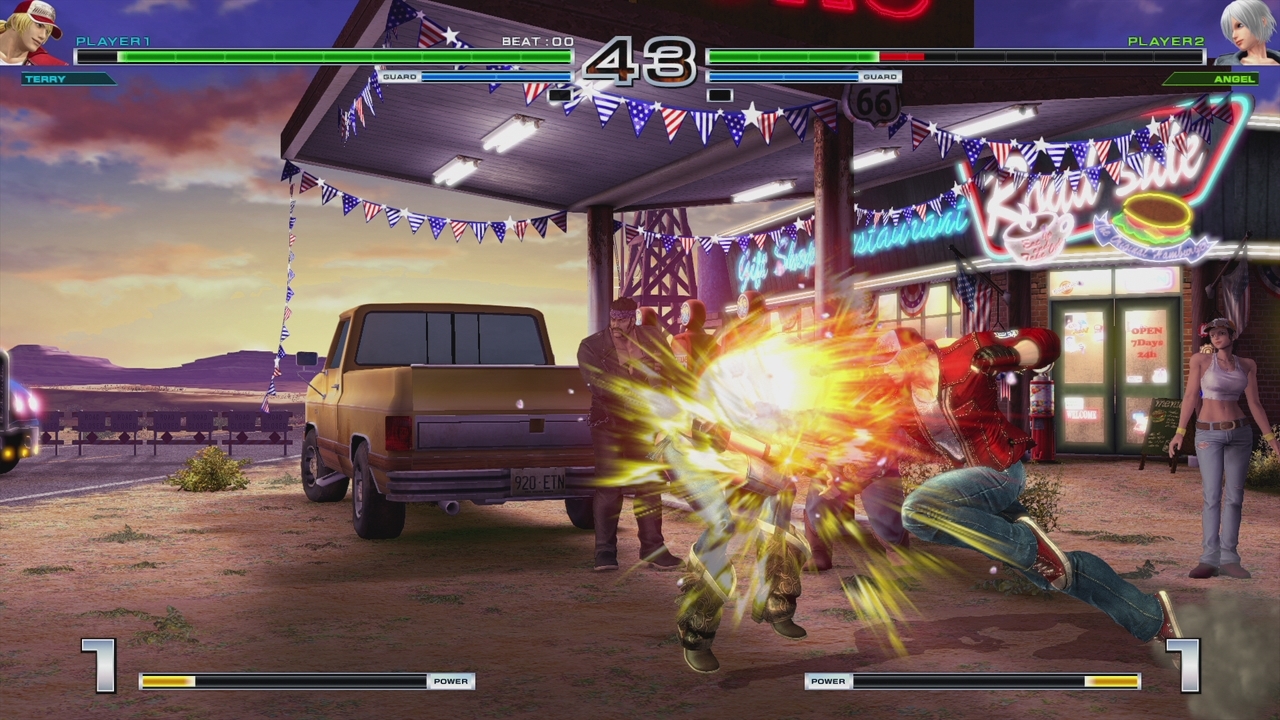 Visually, KOF XIV is quite a downgrade from XIII. While the polygonal models aren’t awful, they aren’t as eye-pleasing as the slick sprites crafted for KOF XII and XIII. Those felt like the natural evolution of the series, and XIV using the polygonal models is too big a difference. One upside to them is that they allow for the cutscenes and in-game fighting to look very similar. As a result, there is a consistency to everything that works well — but the art style isn’t quite as good as it would have been had they retained the sprite work. That was some of the richest sprite art in fighting games, and it feels like they cut the style off prematurely for XIV. It could have been a budgetary issue where it is less expensive to make polygonal models than the highly-detailed sprites, but the game still suffers a bit for it. Fortunately, the animation is still incredibly fluid and captures the action well. Backgrounds are also full of detail — with characters moving around in the more real-life settings, and then some stages forgoing that in an effort to go for an artsy backdrop instead.

The largely-rock soundtrack sets the stage nicely and gets you pumped to fight. It might not be very memorable, but it is fun to listen to during the game itself. The voice acting is strong and gets across the characters’ personalities with either serious or jovial tones. The English subtitles help things out a bit, while the sound effects tell the true tale of all the combat. Punches and kicks sound forceful and most importantly — painful. Everything has a sense of weight, and the more supernatural things, like fireballs and the like all at least sound like the elements they use. 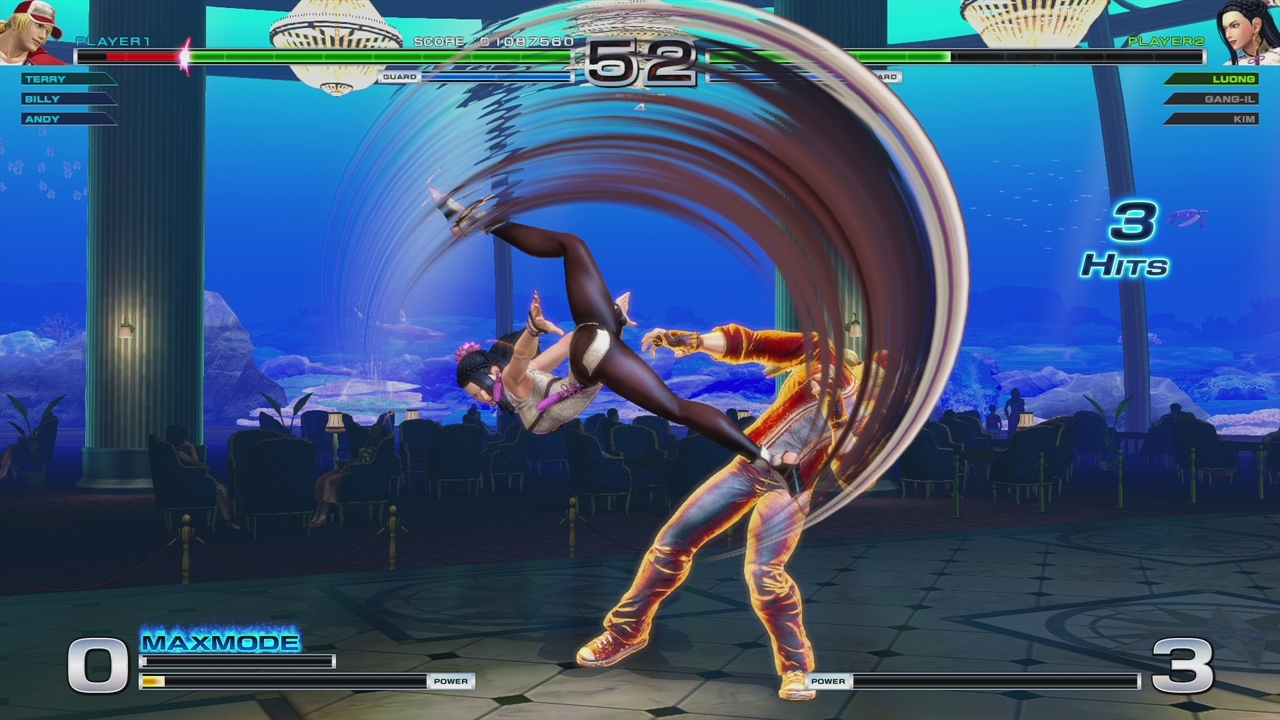 King of Fighters XIV has some rough edges, but is outstanding overall. It plays smoothly and while the DualShock 4 may not be the perfect fighting game pad, it does work fairly well by default — and is improved with stick enhancers that allow you to replicate a joystick’s movement. The story mode is focused and gives you some amusing glimpses into the characters and their interactions with one another, while the art style shift is jarring but gets the job done. Characters lack some of the detail they had in XIII, but there is a large roster here to enjoy alongside some new characters. The new art does allow for the cinematics to mesh with the in-game world a little better — so it’s not a total loss. Anyone who has ever enjoyed the series will find a lot to like about KOF XIV, and its user-friendly nature makes it a great starter game for the franchise.