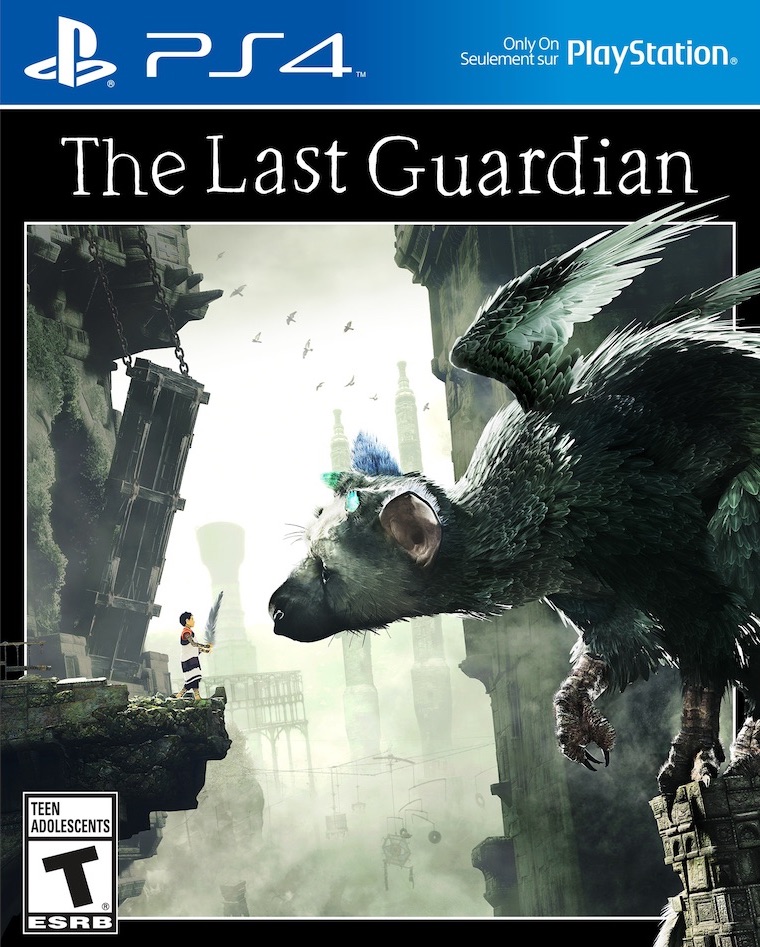 Team ICO’s craftsmanship has led to their projects becoming legendary. ICO was a shining star on the PlayStation 2 that gave players a sense of isolation like no other game had at that point in time. Its blend of escort missions and puzzle-solving made for an interesting experience and used fear to drive you forward. There were no jump scares in the traditional sense — just your character being underpowered and having to rely on wit and guile to survive. This was followed up on near perfectly with one of the finest games to ever grace the PS2 — Shadow of the Colossus.  Wander’s tale saw him traverse a wide-open world on horseback to battle beasts and merged a David vs. Goliath mentality with a battle system that itself blended a touch of puzzle-solving just to figure out how to board the monstrosities you had to vanquish.

The Last Guardian tells a story of friendship, but instead of being friends with another human, you build a bond with a beast. It starts off on a sour note as you’re simply in Trico’s way and he isn’t sure what to make of you and you’re scared to death of him. As a young boy, this is natural, so you scour the world searching for a way to appease him. Barrels of food do the trick and win him over briefly — while removing arrows and spears from his flesh earns his trust. It’s a fairly slow process in real-time, but pays off as you go from being a small child with no way to defend yourself to suddenly having a giant beast at your beck and call.

You rely on Trico to help you traverse the world and his size will be a blessing and a curse at times. There will be situations where he will be stuck and you have to use your brain to figure out how to get him from Point A to B safely and quickly. You’re given a smattering of tools to help though, including a mirror that throws you off a bit. You naturally think that it’s going going to be used to reflect light and solve Legend of Zelda-style logic puzzles. Instead, it’s still used for puzzle-solving — but a puzzle’s conclusion could very well result in a part of the world being destroyed. Sometimes, it’s a simple solution — like using the mirror to summon lightning from Trico’s tail and burn your obstacles. Other times, you’ll need it to climb up and find a new handhold or chain to grab onto. 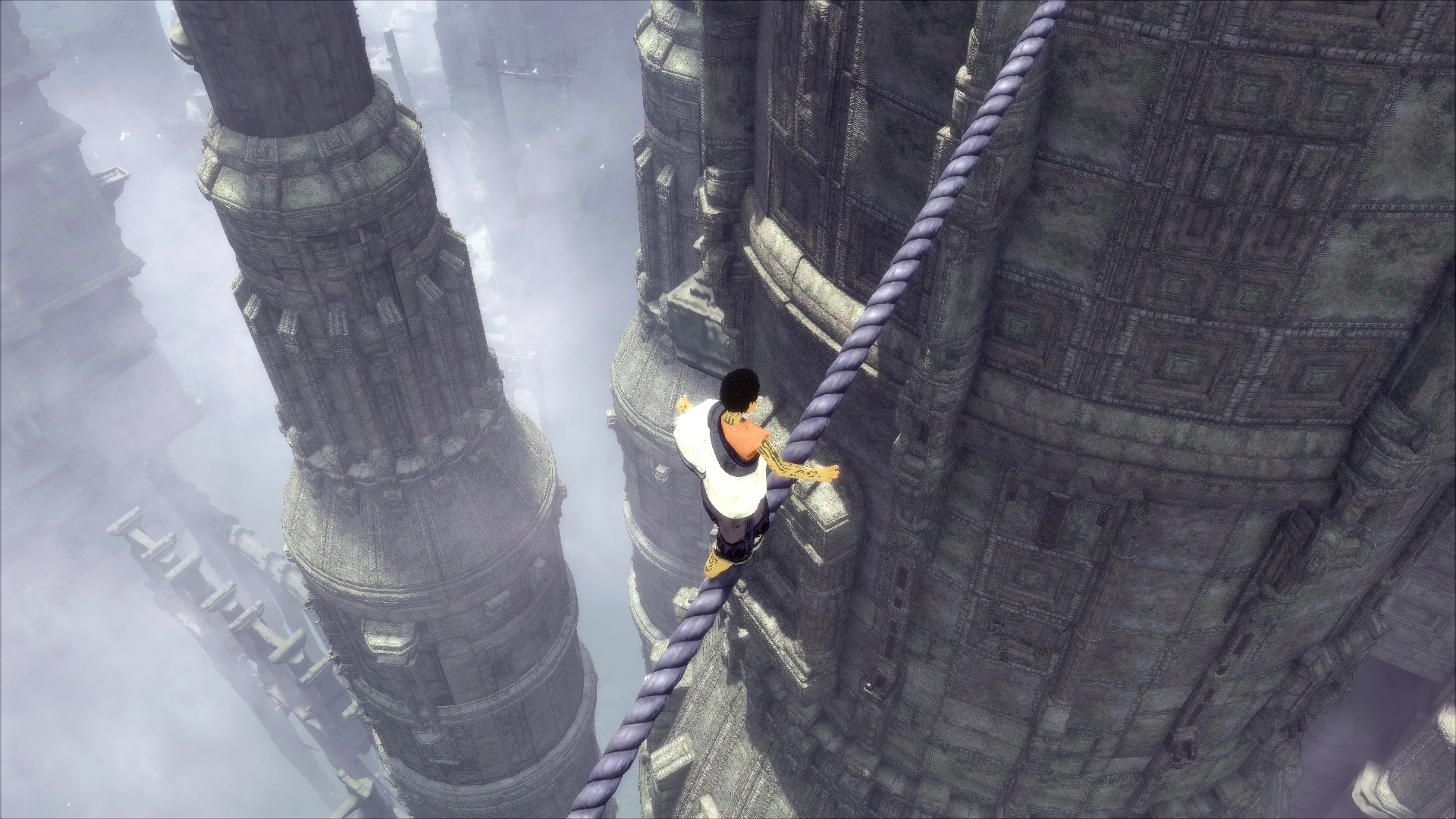 The puzzles are usually logic-based, so with a limited amount of things at your disposal — the mirror, jumping, item grabbing and lever-grabbing — you know there are only so many things you can do in the current area to progress. Trial and error plays a large part in progressing and that brings about some of The Last Guardian’s best moments. As a young boy just thrown into the world, you take on that role seamlessly because your hand isn’t held through anything outside of controller input guides. You have to figure out everything as you go and this leads to a mix of great joy and frustration. Finding where to go is usually simple enough when you scope out the area and see the general layout of things. You can see that you’re at one area and need to get somewhere else, but finding the way to get there can be tricky.

Players get only the briefest of hints every now and then, so you do have to be in the right frame of mind to excel. Once you do figure things out though, you have a Eureka moment and experience a sense of accomplishment. Moving on means you will see new parts of the world — and this is one of the best-realized worlds in gaming history. Everything in it is full of detail, and while areas like the castle interior are dank and dreary, you can peer outside of it and glimpse at how good things can be. Stepping outside engulfs you in a world of lush greenery, but also a sense of foreboding as you are now out in the open and far more vulnerable than you were inside the castle. You were safe there to some degree, and now have to face the dangers of the world.

Your bond with Trico is strong and results in some incredibly touching moments just through the player’s own actions. You can treat Trico a bit like a pet and pet him — doing so results in him being a bit more responsive to your calls and allows you to treat your character as less jaded and more open to affection. Stroking Trico’s fur also allows you to free it from blood, which is a small touch that adds a lot to the sense that every in-game action has a consequence in the world. This holds true for the game’s physics, which treat Trico’s fur with a surprisingly high amount of realism. Small bits will go flying off after a long jump and the buildup of blood serves as an ever-present reminder of the game’s opening where he is caked in blood from his wounds. 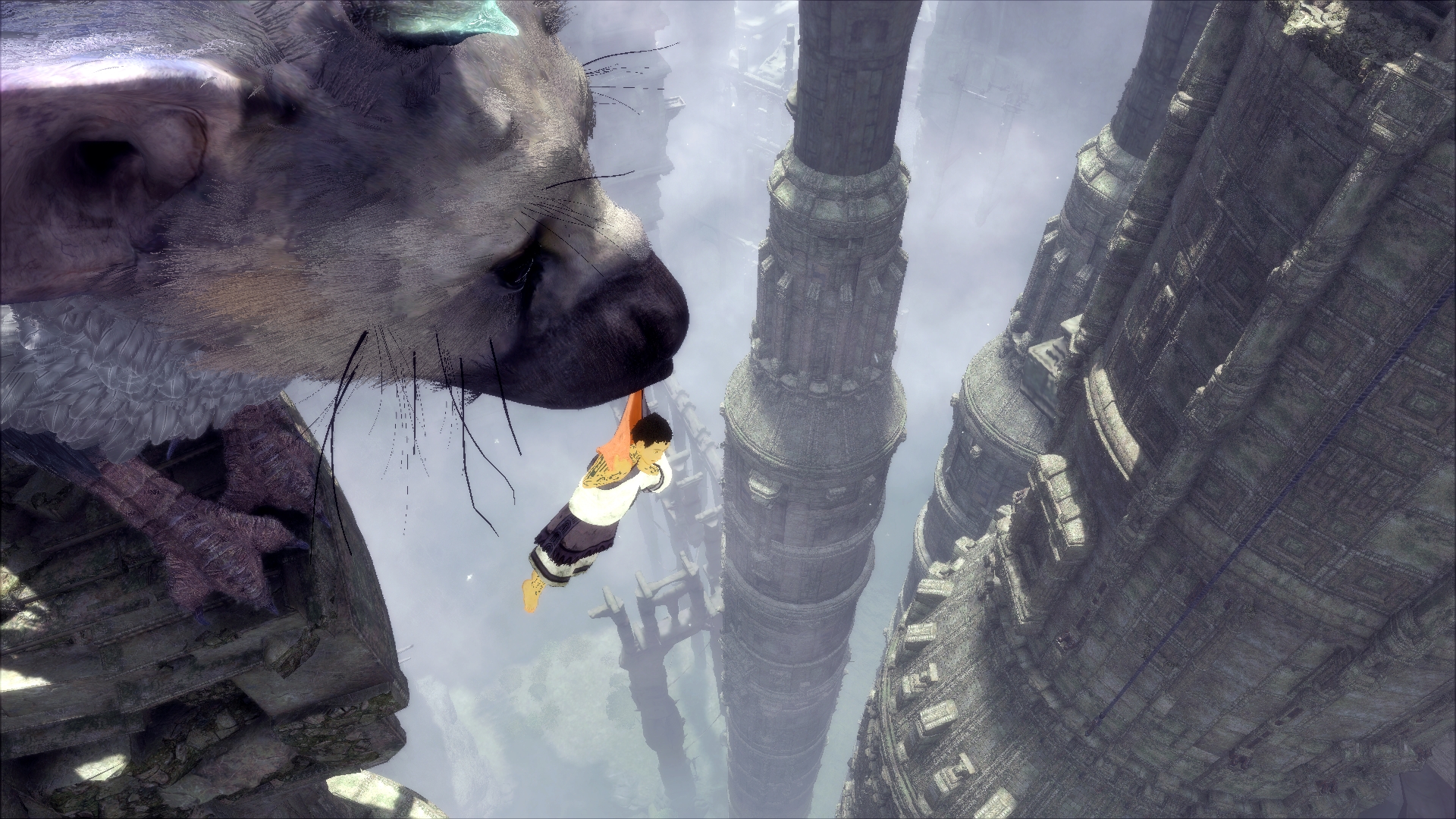 While Trico’s size and the game’s overall sense of scale are its most immediately-impressive points, even more little touches make the world come alive. When you roll, you have to be careful to do so in a clear space because if you’re near an object like a step, you will hit it. Similarly, you can only use the jump feature on areas you could logically jump on for your size. There’s a sense of reality here and that shines through brightly when it comes to falls. Fall damage is largely a thing of the past, but it’s brought back here in a strong way with a large fall not killing you — but hobbling you. You’ll walk around for a solid minute holding the injured leg — giving the action of taking a risky jump a clear consequence, but not one that will kill you.

The animation is simply stunning and some of the most realistic in gaming. Every movement comes off as weighty, making moving around with Trico that much more impressive. With a human’s animations, you can at least fully replicate that with a person to ensure realism. With a create that doesn’t exist, the developers had a tougher road to travel and still traversed it marvelously. Hopping aboard Trico and then having him run and jump around fills you with an equal sense of excitement and terror as you’re never quite sure where he’s going, but you know that when he moves with you, things are going to go down and you will feel that landing in your bones. 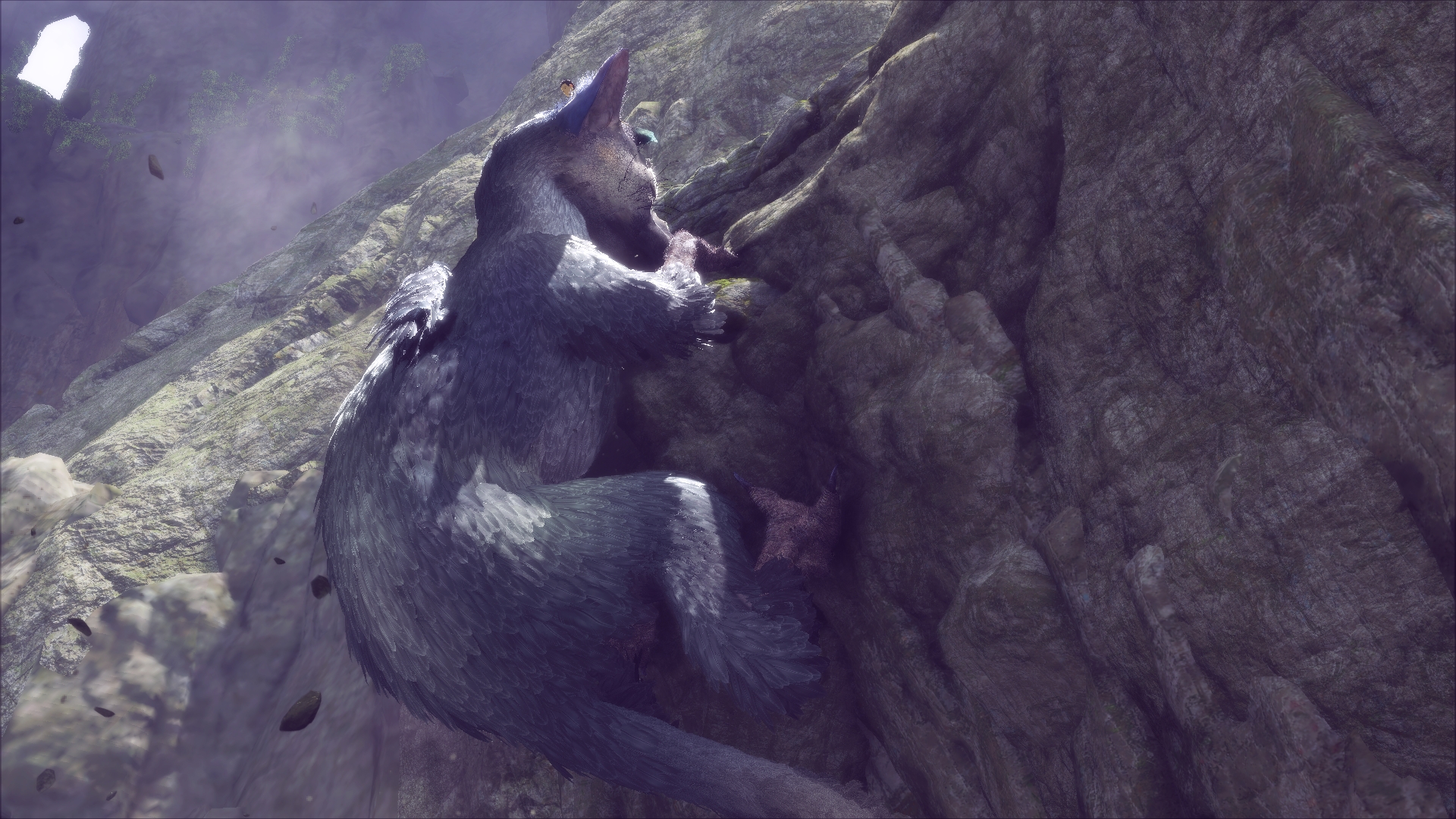 The game does have a few small issues though. Clipping does show up with fur, but it never really becomes a major issue. It’s there, but doesn’t undermine the core emotional impact of what’s going on. Trico is a visually complex character and his weight being captured perfectly matters more to the narrative than a few technical problems with clipping. Checkpoint placement could be a bit more forgiving for the player. There can be times where you will play for a half hour or more and have a death take you back fairly significantly. Even if it’s “only” half an hour of time, that can result in replaying portions that build up the bond between yourself and Trico, which are so in the moment that replaying them again so quickly can lessen their impact.

As strong as nearly every other part of The Last Guardian‘s design is, its sound design is one of its most impressive elements. When you’re indoors, you can hear every footstep and tell exactly what surface you’re on based on the noise. You’ll also hear Trico’s movements from far away — giving those with 3D audio setups either with their home theater or headsets a much richer experience. Subtle changes are made from the first time you call Trico to the next, while the stirring score gets you both excited and scared for what’s to come. Every note has passion behind it and either drives you forward in a tough challenge or makes you appreciate all of the splendor before you. 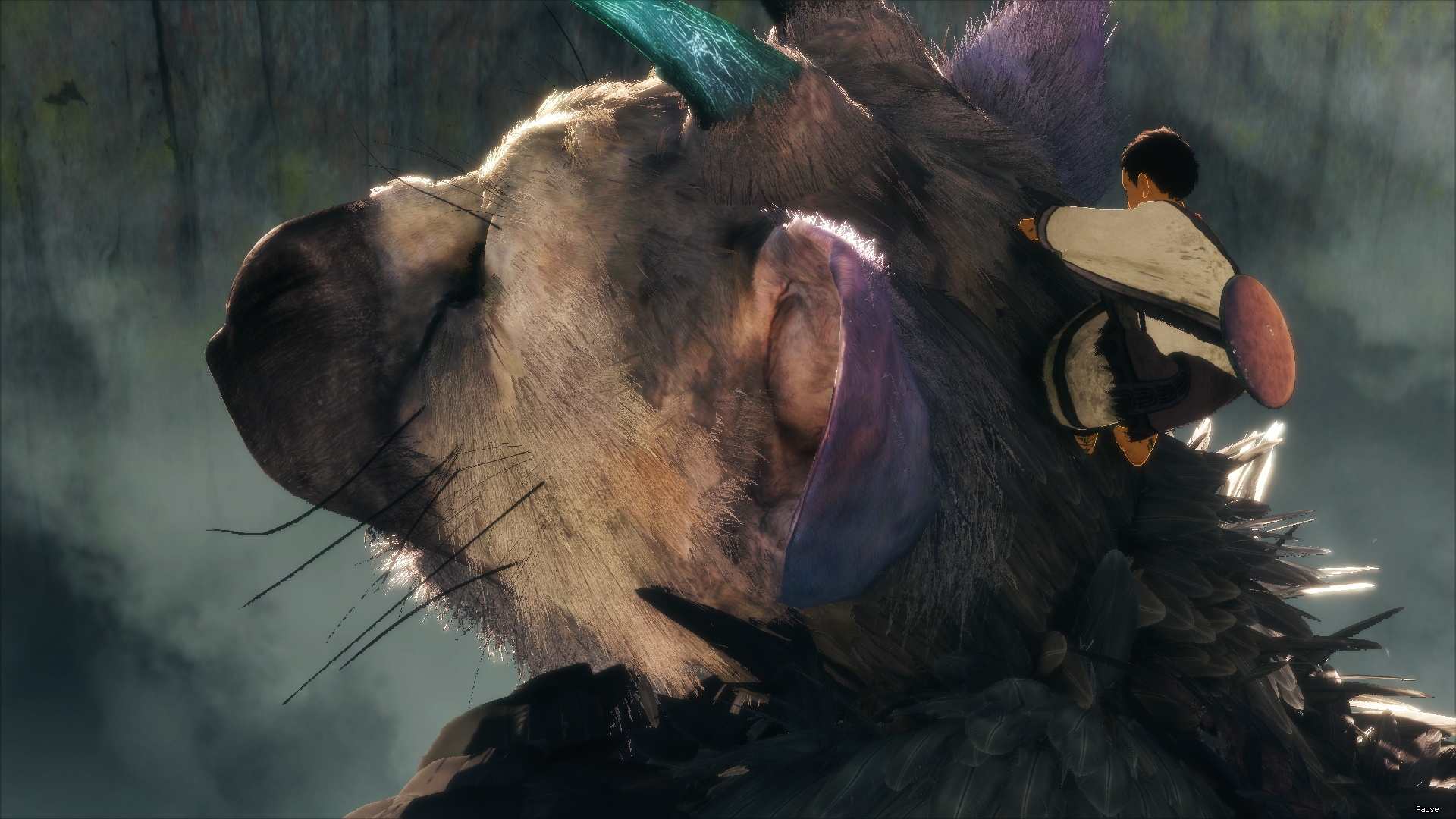 The Last Guardian is Team ICO’s magnum opus. Everything they learned from the prior games in this semi-series has been put to use here and allowed them to craft their greatest adventure yet. Trico’s tale is one of sadness and joy, and something that everyone who enjoyed the team’s prior work should partake in as soon as possible. Newcomers will want to come in with an open mind for exploration and puzzle-solving, but if they do, they will be rewarded with the finest gaming experience yet on the PlayStation 4. Its sense of scale is unmatched and it features the best graphics yet on the console. Minor flaws do exist, but they don’t detract from the overall experience enough to make it anything less than a masterpiece.