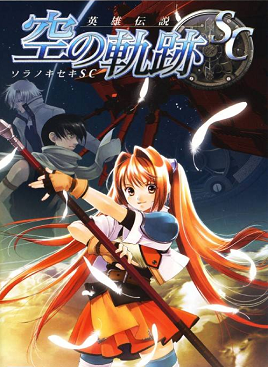 The Legend of Heroes: Trails in the Sky SC

As a designer of quality games, Nihon Falcom simply does not get the respect they deserve. Though they craft well-realized and thoughtfully-designed JRPGs, they never seem to get their rightful mention next to the likes of Square Enix. They seem to be doing alright for themselves, at least. Their Ys series enjoys cult classic status and has a built-in audience. On the other hand, this is detrimental to English speaking gamers. The fact that is took The Legend of Heroes: Trails in the Sky SC, a game that saw its first Japanese release in 2006, until 2015 to release in the West is a testament to that. It’s a PSP game, no less. It’s here now, at least, and it stacks up fairly well for genre fans.

Taking place the morning after the close of chapter one, Estelle awakens to find that her adoptive brother, Joseph, missing. She quickly learns that Joshua was an assassin for a secret order and has fled his friends and family as he fears that his presence would put them in danger. This extreme measure of self-sacrifice holds no bearing for Estelle. As soon as she learns that he has left and why, she proceeds to search for him. After she checks one place, she decides to stop looking in favor of some training up with the Bracer Guild. She didn’t really think her initial search through. This set up leads Estelle on a journey to shed light upon the secretive Society of Ouroboros, find and help Joshua deal with his demons, and make the world a better place.

The great news is that anyone who missed out on the previous chapter, or simply forgot the story due to time, won’t have much of an issue jumping in here. The introductory sequence covers the close of the previous game and gives a well-written rundown of the world. Getting reacquainted with the land of Liberl was a breeze. Indeed, jumping back in after so long was an absolutely pleasant experience. Taking the player by the nose and pulling them along is the deep, multi-tiered story. The machinations of the society is incredibly devious. As each layer of their plot gets revealed, other events come into clearer focus. The way each nugget is doled out to the player is a masterful example of storytelling. It also lends a sense of being a small, but increasingly important, part of a major story. Even though she has proven herself previously, Estelle isn’t the savior of the world from the outset. Her problems are personal; her starting tasks are for the good of those near her. 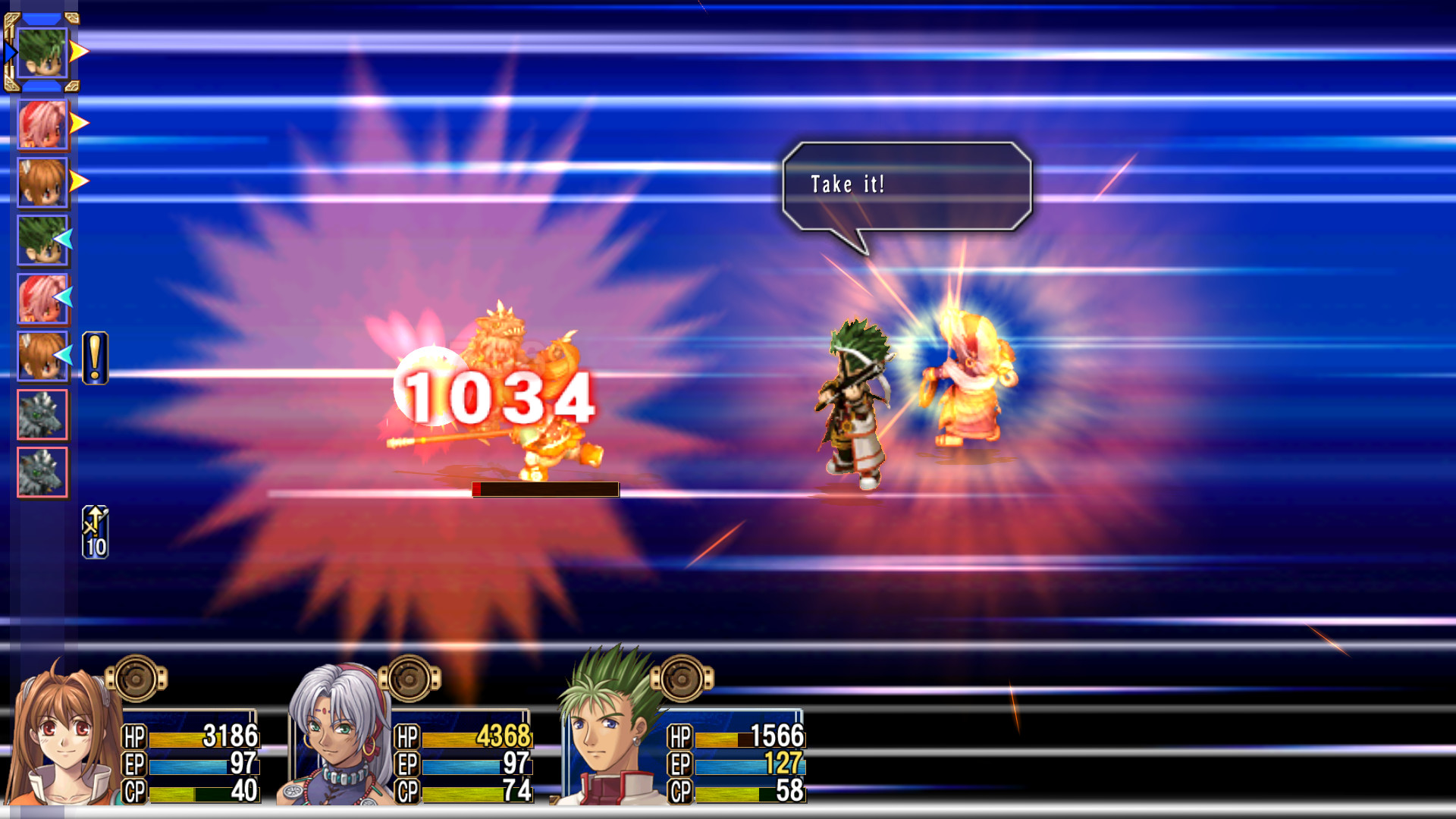 The moment to moment dialogue adds a human element to the proceedings, as well. While jokes can be made about the “anime-ness” of it all, the motivations and decisions of each character make their own kind of sense. Estelle knows her limitations and strives to overcome them to help her friends and the guild. This doesn’t mean that they skimped on the humor. An early sapphic misunderstanding on Estelle’s part was especially humorous.

With all that, there are still some issues with the translation. There are numerous, and distracting, typos peppering the text. Some turns of phrase can leave players stuck, trying to parse out their meaning. Also, there are some incredibly sexist statements made. While well meaning, a male teammate advises our heroine that because she is female, she shouldn’t be afraid to ask for help. It’s what is expected of her. Instead of telling Mysogynisto, The Human Skid Mark to jump off an airship, she responds “You’re right! I will!” After everything that she has accomplished, one would think this line of writing would be skipped or, if included, put in check by the character. 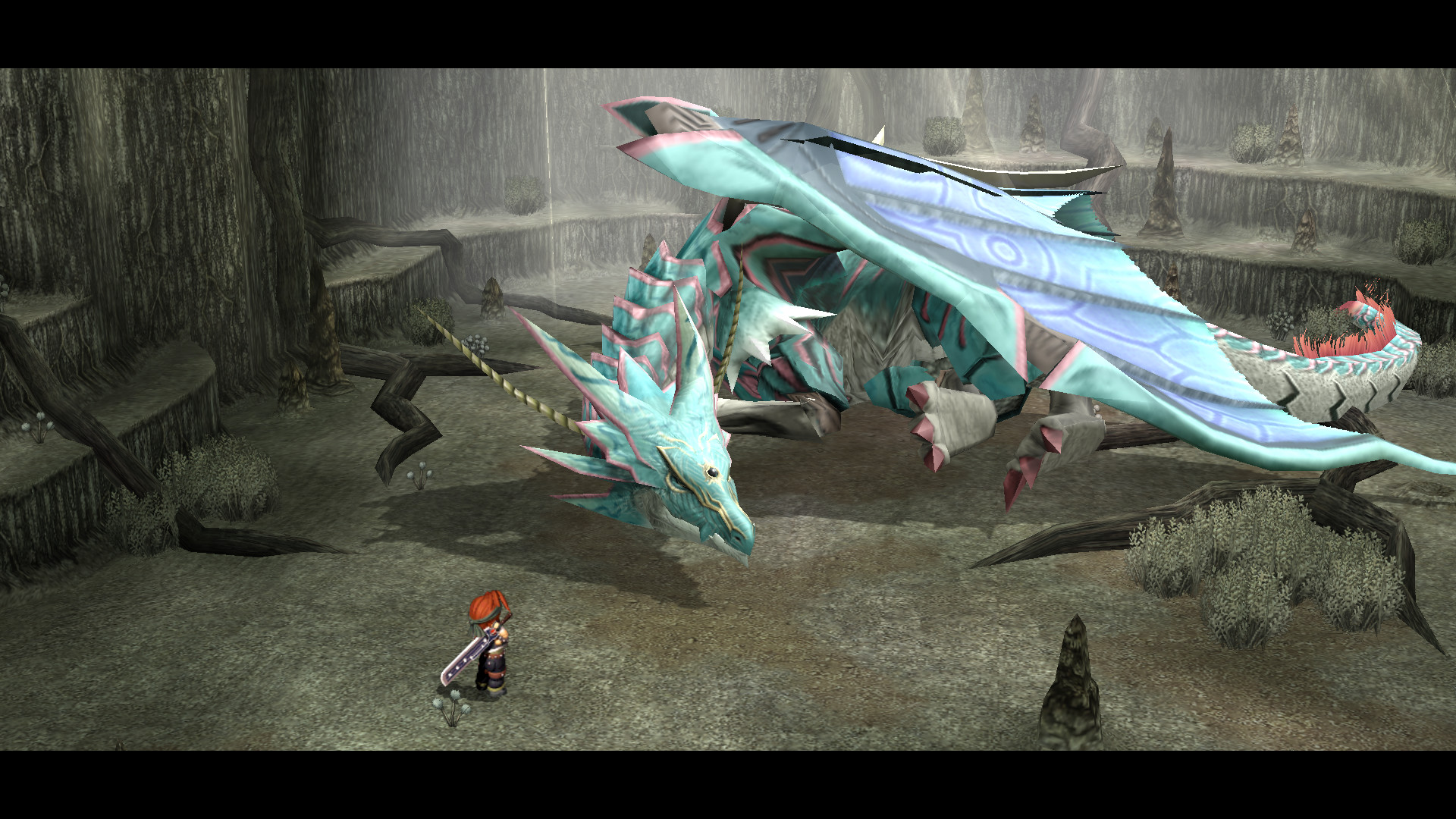 While the story is all well and good, this is still a game. There must be gameplay. For the most part, this second chapter handles it admirably. The combat is still a turn based, tactical affair based on square grids. Movement and placement factor into actions, though not as much as a full tactical game. Each character has their own unique crafts, which act as skills, that can be unleashed by using craft points. These points regenerate whenever a character gives or receives damage. Being able to combo up with other characters adds an additional layer of dishing out the pain. Arts are the spells. These use EP and time to cast, though there are ways to shorten it. The differing characters do have there own range of attack and specialties that make coordinating the strategies during boss fights great fun.

Where this system falters is during the routine fights with the trash enemies. When trying to grind out levels to surmount the next boss, taking these creatures on becomes necessary. These battles still take longer than most other genre titles due to the systems in place. What can be an engrossing system during the tough parts becomes a laborious chore when simply exploring dungeons. Acknowledging that this system was in place previously, it simply has not aged well. It’s still worth the effort to push through. 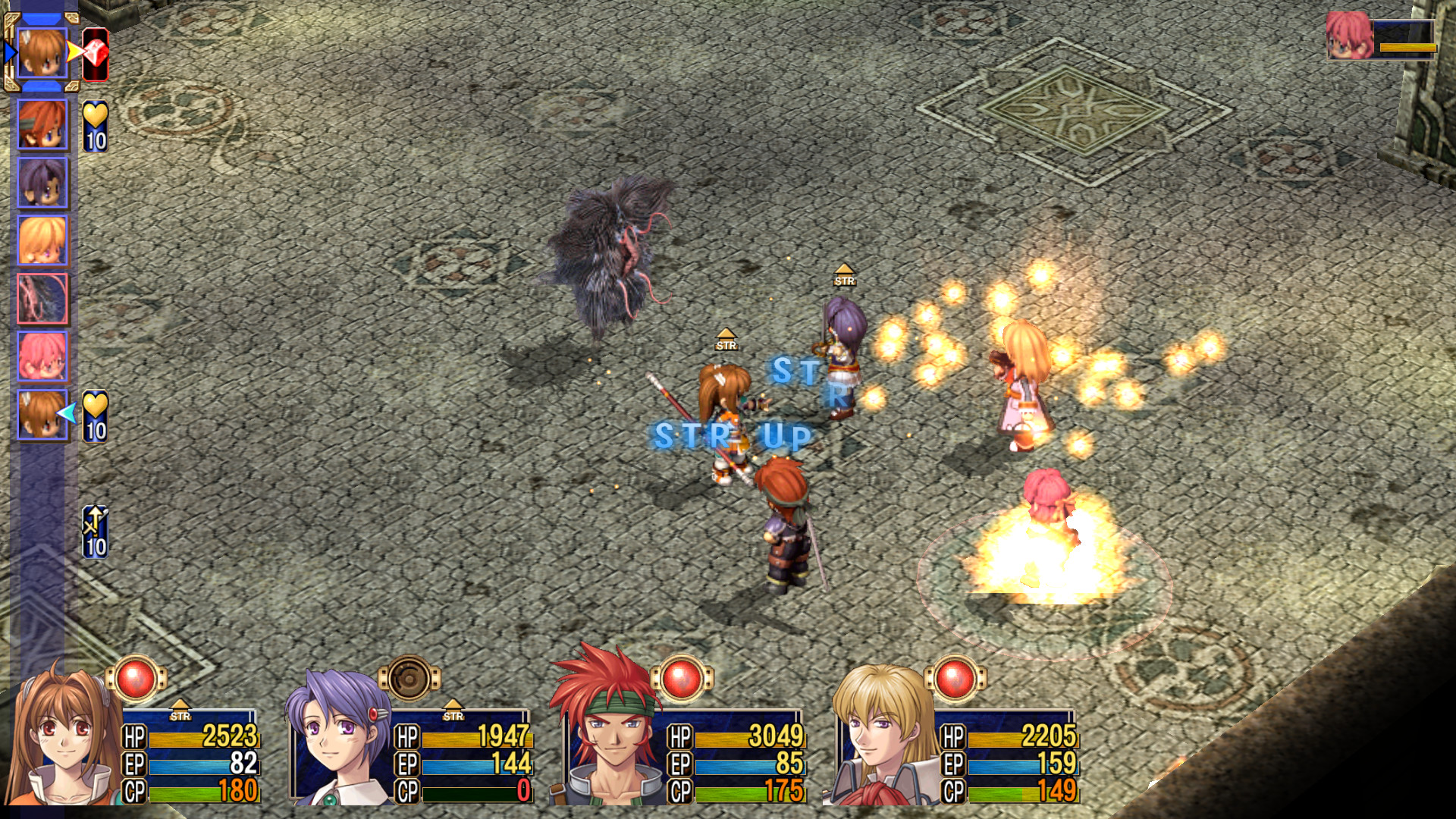 What has aged well is the stylized low fidelity graphics. The science fiction technology integrated with the fantasy trappings of this world is a fun place to explore. Admittedly, the Final Fantasy series has done this melding long before The Legend of Heroes existed, but the aesthetic here is still entertaining. Running around with staves and swords while giant mechanized battle tanks roam the landscape might cause one to question the sanity of our protagonists, but it’s better to just go with it.

Completionists can expect to have their time completely eaten away here. There are numerous side quests to undertake in hopes of raising Estelle’s rank in the Bracer Guild. There are tons of recipes to find. The upgraded orbment utility adds tons of new wrinkles to what can be combined and used in to power up the character. This title is just sprawling. Considering that it takes up two UMD’s worth of space, those who pick this up won’t need another title for a long while. 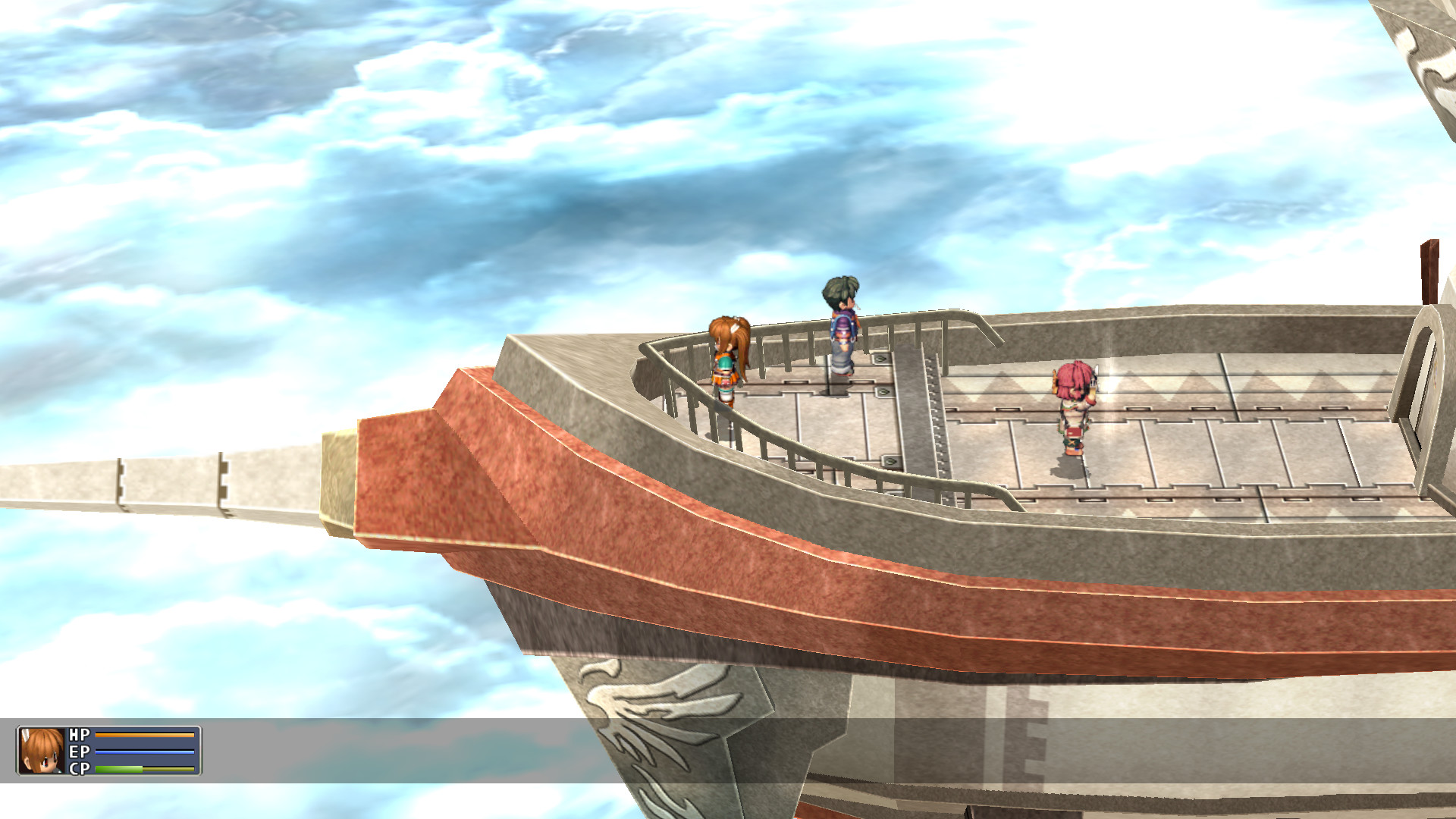 The Legend of Heroes: Trails in the Sky SC is not just a title that writers looking to pad their word count would love. There is an incredible amount of depth packed into this release. With so much to see and do, so much to learn, so much to experience, this classic JRPG is worth the effort to play. Sure, the translation is wonky and there are some moments that stick out as distasteful to many. Sure, the battle elements drag out in places. Through it all, though, this should keep genre fans tied up until the Third Chapter releases in the west approximately when the sun implodes, darkening the solar system and extinguishing all life on this planet. Unless I am wrong (please).