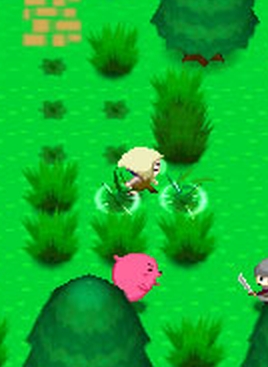 The Legend of Kusakari

Have you ever spent time in a Legend of Zelda game just simply swinging your sword around and cutting grass, goofing off? Or maybe even imagined some sort of Hyrulean lawn care service resulting from this, as seen in more than a few webcomics and such? Well, thanks to The Legend of Kusakari for the 3DS, that service has finally become a reality that you can take command of as you help our protagonist Shiba Kari swing his scythe around to clear the ground for other heroes. So the setup is quite quirky and full of potential for a charming little arcade-esque adventure, but unlike the grass you encounter, the whole experience sadly comes up short in the end.

The backdrop here is that the Demon King is attacking the land, and the bravest heroes in the area have to fight against his evil forces. But as mentioned, that’s not your actual story. Shiba Kari is too weak to fight off the evil monsters, but any sort of help is a appreciated, so Shiba decides to use his scythe to trim all the grass in the land so that the heroes don’t get tripped up along the way. In each top-down area, the goal is simply to traverse the map and slash away all the grass while avoiding obstacles belonging to the more exciting tale along the way. The controls are nice and simple, requiring nothing more than a quick slash, a spin attack, and a dash performed by holding down a shoulder button.

Unfortunately, complications arise due to the fact that Shiba isn’t exactly in the best of health, so your life meter keeps losing partial hearts as time passes. The only way to refill health is to cut down any life-restoring blue grass you find, and while all of this encourages you to speed through the levels as quickly yet efficiently as possible, it also makes things frustrating at times. Part of this is the fact that The Legend of Kusakari barely even tells you about this part of the gameplay in the beginning, leading to at least one moment where Shiba seemingly died for no reason. This also makes recovering from any collisions with enemies in later levels quite frustrating, leaving no room for any error. 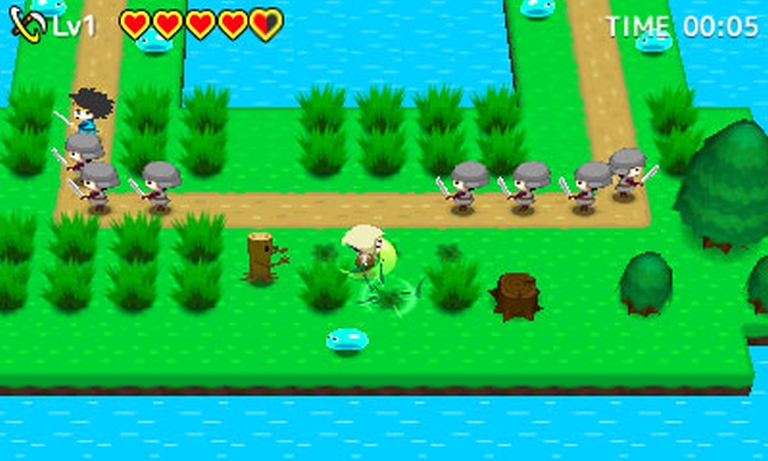 The Legend of Kusakari has fifty levels overall, introducing such challenges along the way as thick grass that requires multiple cuts, sand that burns you, and mud that slows you down, among others. But the level design sadly never make the best use out of all of these elements when it comes to combining them into a tough but fair challenge until the very end, during the final twenty minutes or so of a two-hour game. The initial few levels hold promise, but by the time you’ve completed the second world, you’ll have pretty much seen everything that the game has to offer, and things get repetitive a bit quickly.

The enemy design doesn’t exactly help, with the same slimes and soldiers repeating themselves ad nauseum. And it’s not like they have much variety in difficulty, with each just wandering back and forth in slightly different patterns and speeds. The faux 8-bit aesthetic is nice to look at, though, even if we don’t exactly get the most create visuals (though the use of stock fantasy tropes is part of the joke). The music doesn’t fare much better as well. Being congratulated with an expy of the Zelda theme that’s off-key is a cute idea at first, until you have to hear it twenty times in quick succession. Then you’re racing for the volume control. 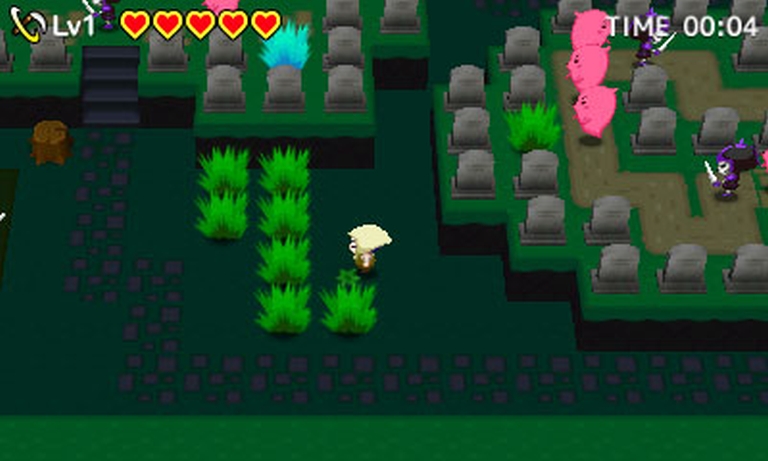 Speaking of which, The Legend of Kusakari does try to inject some humor into the proceedings, but doesn’t get the time to really develop anything, limiting itself to end-of-level messages and collectible plants with humorous quips that you unlock by accomplishing certain goals in each level. It’s cute stuff, but never gets a chance to flourish beyond being just “cute.” Unlocking the flowers is also one of the few ways replayability is injected into things, with the other ways being the ranks you earn in each level that unlock an extra world (although the game is vague as to what gets you the best rank beyond time, if anything), and an Endless Mode where the goal is to just cut as much grass as you can while it regrows, hoping for the occasional bit of health.

Endless Mode is actually a pretty decent draw here, providing a more simple and fun arcade-style experience, albeit one lacking a bit in variety and relying on chance at times. It’s also where the game’s controls get a better chance to shine, as you get to dash around in a more open area, sliding into grass patches and trying to clear out as much as possible with a well-timed cut. It really shows off the potential that the concept has, because despite any preceding negativity, The Legend of Kusakari is still an okay game overall, it’s just held back by a combo of awkward design choices and repetitive bits. 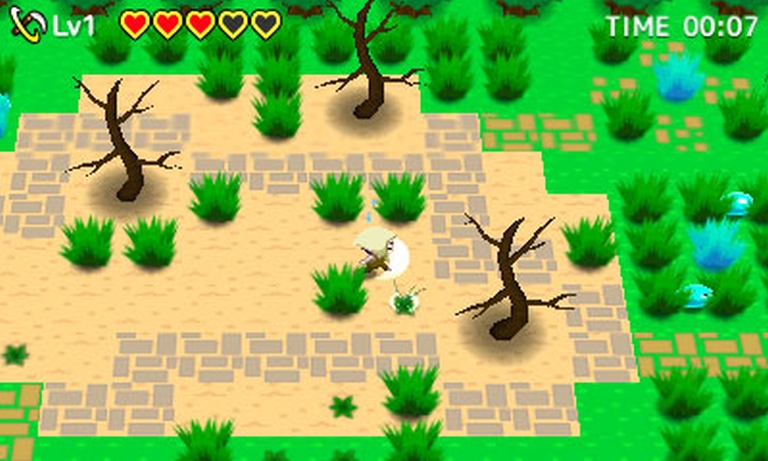 As a five-dollar indie game, The Legend of Kurasaki is a competent time-waster, but nothing more than that. While a neat concept, charm and simple yet nice gameplay might draw you in, the short length, repetitive elements and frustrating moments made worse by a lack of explanation (even after beating the game, I still don’t know how the level system works, not that it was apparently needed) hamper what could have been an adorable little homage to a legendary Nintendo series. Not bad, but in the end, you may be better off saving that sawbuck you earned mowing the neighbor’s lawn for something else.