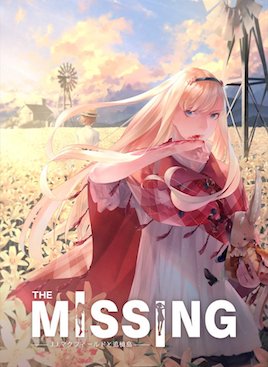 The Missing: J.J. Macfield and The Island of Memories

It’s not uncommon to find the Japanese sector of the industry delving deepest of all in an attempt to find that weird but illusive middle-ground between indulgent absurdity and heartfelt reality. Incorporating story elements or otherwise, solely adamant on a gameplay’s potential strengths, list off some of the country’s most renowned directors/producers over the past fifteen-or-so years alone — that can rightly stand apart from their respective studios — and you’ll find one (perhaps the only) thread linking them all together is that initially-polarizing clash of tone, delivery, design or a combination of all three, that in actuality pulls off something remarkable. Shinji Mikami, Hideki Kamiya, Yoko Taro, Goichi “Suda51” Suda, Hideo Kojima and last but not least, Hidetaka Suehiro, best known by his fans and detractors alike, as Swery.

While Swery may not wield as vast or as acclaimed a catalog as some of the other aforementioned names above, that’s not to say that the Osaka-born [now head of developer White Owls] director and designer’s signatory taste for the weird and the wacky is absent in many an enthusiast’s mind. As divisive (and admittedly flawed) a title 2010’s Deadly Premonition was, its odd, unconventional and at times absurd delivery granted both it and Swery not just a cult following that remains to this day, but in the latter case, the mantra as one of the country’s more quirkier and thus intriguing leads in the world of video game development. To call The Missing — or The Missing: J.J. Macfield and The Island of Memories to give it its official title — itself quirky would not only prove a massive understatement, but potentially skips over just how well, despite the game’s relatively short run-time of around seven hours, Swery and co depict an undeniably emphatic tale sufficient enough in its delivery, it almost becomes the main pull of the game in of itself.

But naturally, the one element that most will be drawn to coming into this is of course the bizarre way players are required to not only solve puzzles, but simply navigate the world to begin with. From flinging one’s self at a sharp object so as to dismember one or many parts of J.J.’s body in order to fit through tight spaces, to having a heavy object break a critical bone or two — which, as a result, flips the environment upside down — or even setting one’s self on fire in order to burn away certain barriers. There’s no clear gore or otherwise graphic material on show, just as much as there’s little consequence for how many times you can willingly thrust J.J. into a moving saw-blade or off the edge of a high platform for example — a simple holding-down of a button immediately respawning J.J. back to her former, healthy, all-in-one-piece self. 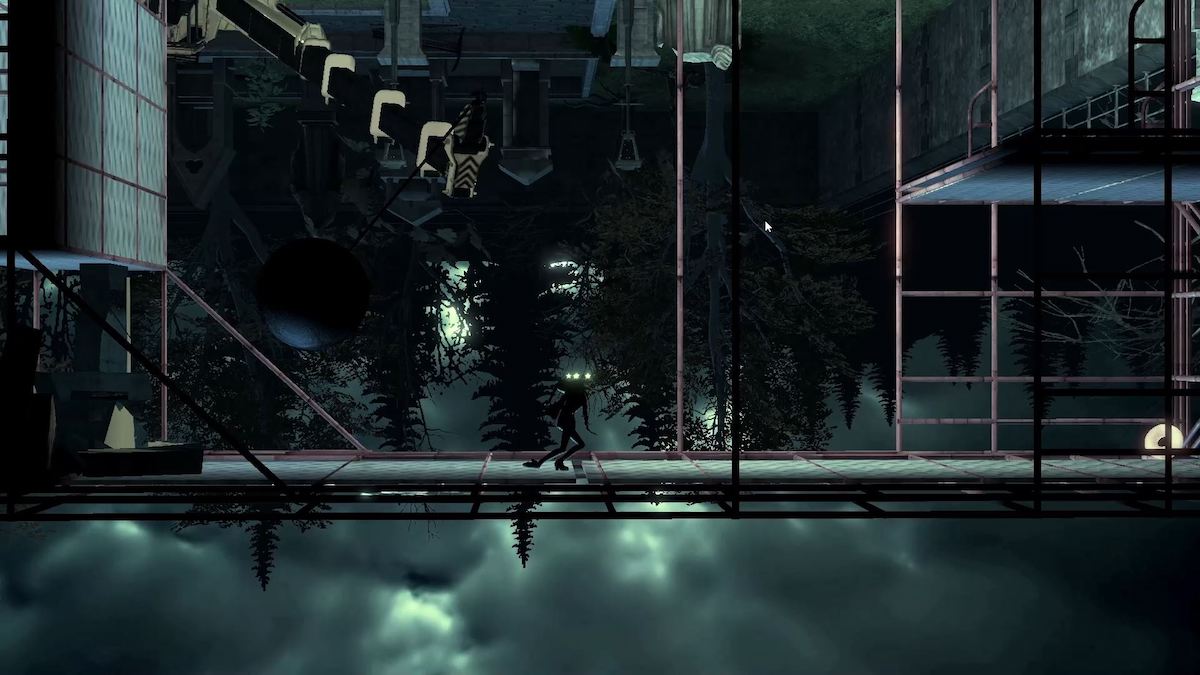 Yet the game still doesn’t shy completely away from elaborating on the evident pain and struggle J.J. finds herself battling through time after time. Screaming as she’s engulfed in flames or ripped to shreds by a ventilation fan; collapsing in a heap as she limps or hops to either side due to having one less leg to walk on or reluctantly snapping a bone back into place in order to revert an upside-down world the right way round. As odd a concept this might be, the game does demonstrate enough of a variety in its puzzles — and satisfying a feeling to work them out in the end — for the mechanics in place to make sense and prove viable.

Particularly when it comes to discovering all secret, tucked-away collectibles whereupon a combination of the three main injury types — decapitation, concussion and burning — all come into play, one way or another. While its evident The Missing on a structural front is taking a few striking cues from Playdead’s own distinct flavor of puzzle-platforming (complete with physics, block-pushing and scripted chase set pieces alike) a la Limbo and Inside, there’s enough intrigue woven into the narrative to dispel the notion the game is simply a cheap imitator. Needless to say, the story being told in The Missing is the where its true poignancy comes into play, despite the blatantly obvious premise revealing itself in the first few minutes alone, but managing to drip-feed crucial detail throughout regardless. 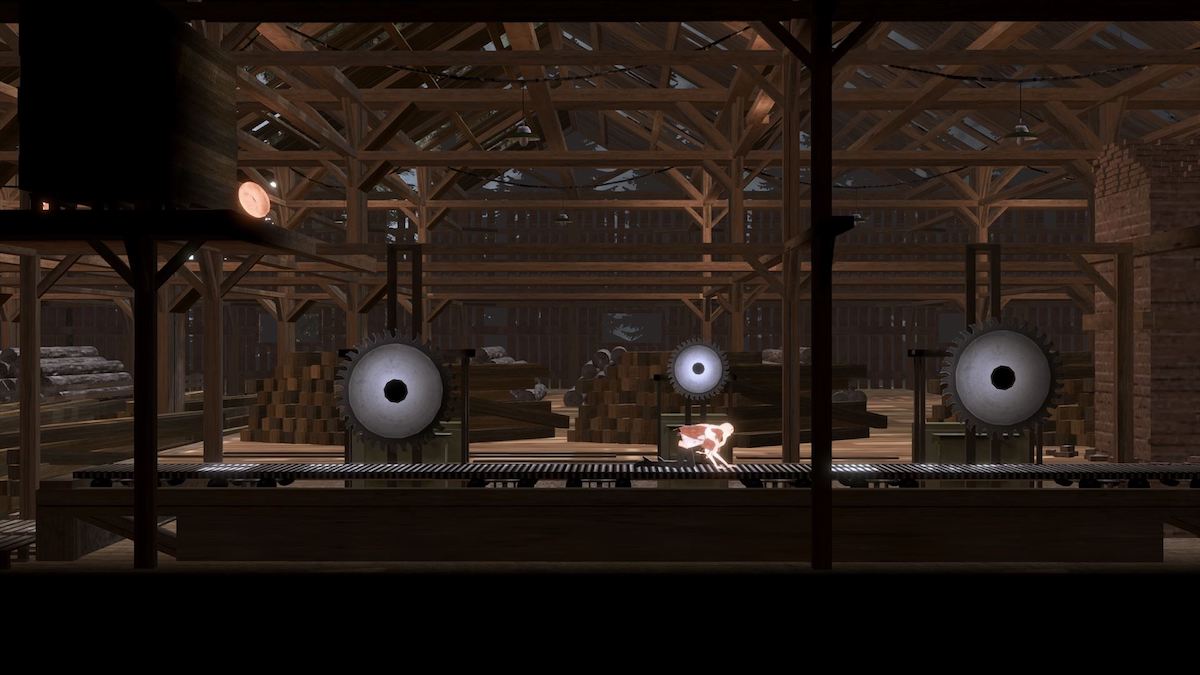 Some of the additional plot exposition doesn’t marry up with the current tone of the situation, however, mainly done through the use of a smartphone. Both at pre-determined points in the game and upon gathering enough collectibles, expanding through additional chat logs which in turn sheds more light on J.J. herself as well as her relationship with other characters. So too there are a couple of instances wherein a plot twist of sorts looks to only be present for the mere sake of having a twist — the game’s last scene especially not only feeling shoehorned in, but going as far as to risk undermining a lot of what the game establishes (and successfully so) beforehand. But credit where credit’s due in how well it maintains player intrigue from start to finish. Namely if there’s one thing the game succeeds at, it’s keeping a fairly tight lid on the true nature of the game’s intentions or even the direction with which the tale eventually leads towards.

That’s not to say The Missing gets away with delivering too some offensively basic level design or horrid technical mishaps (at least with the game’s Switch version, both resolution and frame-rate cropping up in similarly-unpleasant fashion) in brief parts. Naturally it would be unprofessional not to bring to light too how lacking select environments and surroundings feel at points. Worse, how low in quality particular textures and entire structures can appear, as if what we’re seeing is merely the first phase of what would and should be something more substantial or simply fleshed out. Disappointing as some of the visual aspects may be, though, The Missing does strikes another, equally-important balance when it comes to the puzzles themselves. Offering enough of a suggestion as to what the solution might be, without ever giving away the answer. 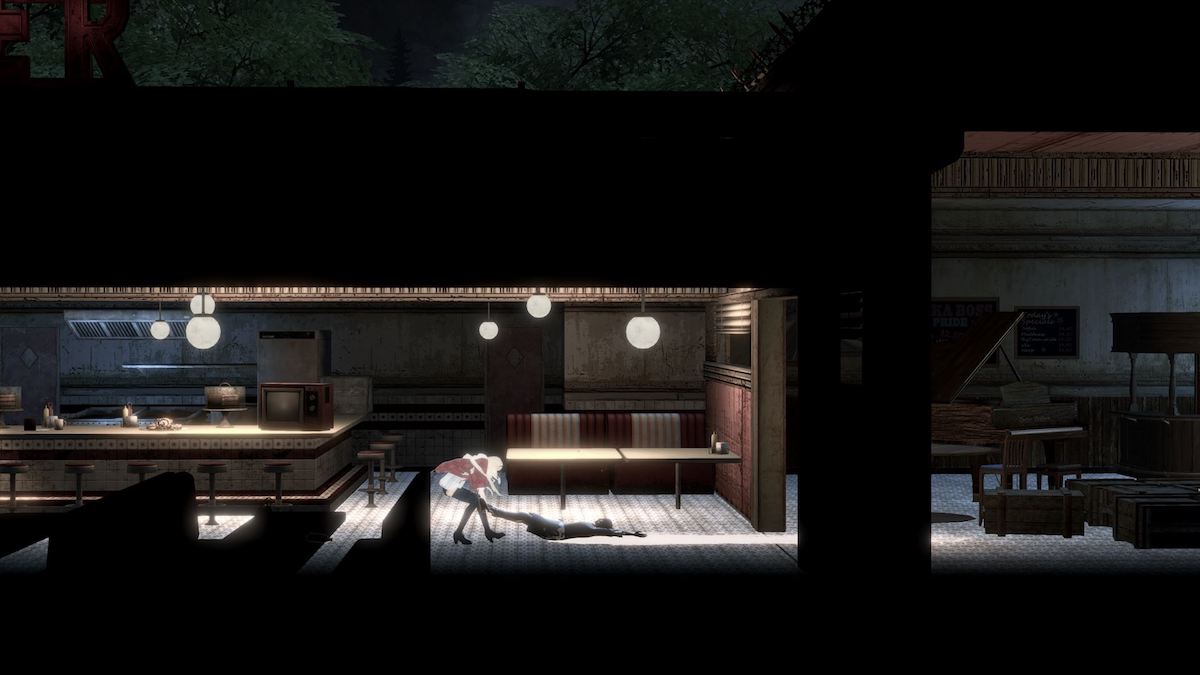 It likely won’t garner the longevity of something a kin to Deadly Premonition, but there’s no denying Swery’s fluency with a whole host of tones, on both gameplay and story — not to mention his ability in using the surreal to portray a real and hard-hitting theme of young love — shines through in a sufficient capacity, despite the numerous rough edges. The Missing: J.J. Macfield and The Island of Memories does in the end succeed in telling an intriguing tale complimented with effective and palpable means of progressing it. It doesn’t always find the right way to present it, but as odd a pitch this masochistic, self-inflicted series of mechanics in a puzzle-platformer might seem, it’s no surprise that Swery and developer White Owls are the ones to not only make it work, but convince its players more so to see this human and engaging tale through to the very end.