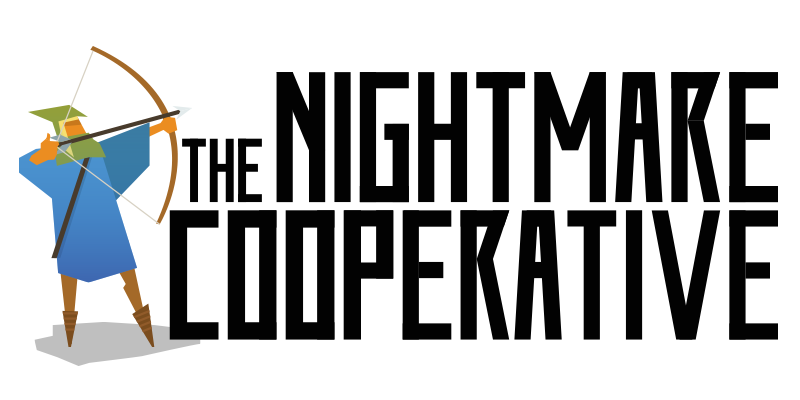 Way back in the 1980s a little game called Rogue landed on PCs. For whatever reason, some 30 years later developers are creating their own roguelikes en masse. The Nightmare Cooperative is the latest of these and follows genre trappings with its own unique twists. Did you think normal dungeon crawlers were difficult? Well, this game takes that difficulty one step further by turning each dungeon raid into a strategic puzzle.

The main hook of The Nightmare Cooperative is control. Players begin the game with two characters. Each is pulled from a different class (miner, necromancer, warrior, etc) and are all controlled by you. Here’s the catch – every character moves when you push a directional button. Hit the up arrow key and your team of one to four characters will all move up if there’s space. As you might expect, this is seriously disorienting at the start and gives this game a very unique flavor. As per roguelike conventions, once you die the game ends – until you start it up again due to the almost addictive nature of play.

Take one look at The Nightmare Cooperative and you’ll likely find the visual aesthetic immediately endearing, or at least unique. The top-down viewpoint allows players to look down upon some gorgeous artwork. Characters and dungeons both look crisp and follow pleasing color schemes. Each character also has a distinct look about them. Most of these designs also help to explain their special thanks to visual cues such as staffs and bows. 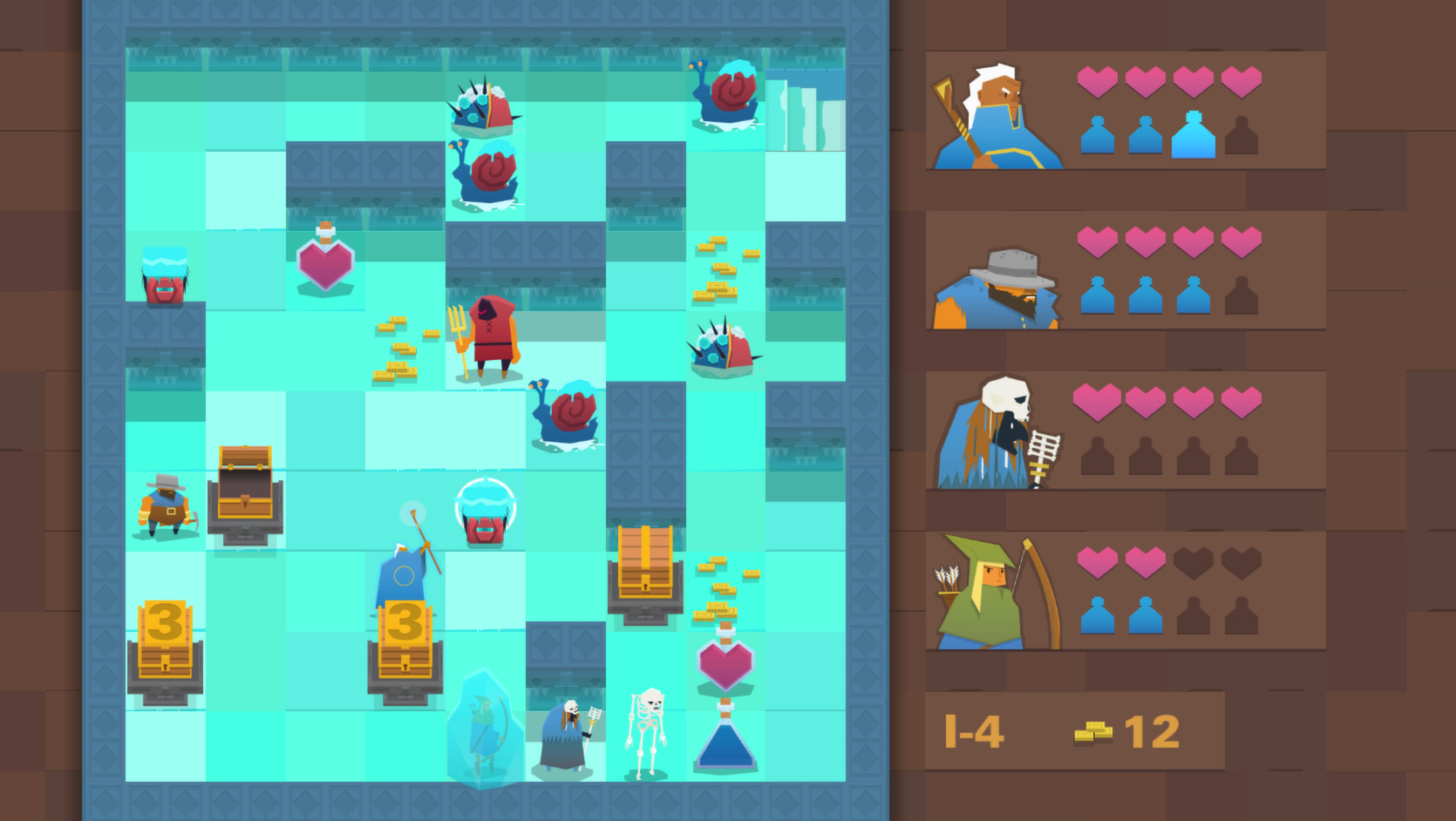 Mistakes will be made at the start. Accidentally dropping one team member into a pit of lava, diving headfirst into a powerful enemy, or other types of screw ups are amplified by simply having to watch out for multiple characters at once. Of course, that’s also the fun of it. Each dungeon room is super compact and would be super easy to get through if not for this movement mechanic! The cramped rooms do pose sometimes unfair challenges to players, though. Sometimes floor blocks will transform into dangerous pathways after a certain amount of moves. When these block your only path to the exit stairway it causes some annoyance (and costs a heart or two of health). Then there are the monsters lurking within the many levels.

During your travels there are a whole host of different baddies to encounter which range from easy to avoid to absolutely menacing. There’s the standard “pacing” types who simply go back and forth paying no mind to your party. Other times you might come across one that sits in place but spins a laser in different directions each turn. Some will switch places with you upon sight which can either be extremely useful or annoying. Then there are stalker-like beasts that will doggedly pursue anyone who catches its eye. Learning what each type of enemy does is paramount to doing well at The Nightmare Cooperative. After all, some aren’t too hard to dodge but others require a careful approach or avoidance strategy. 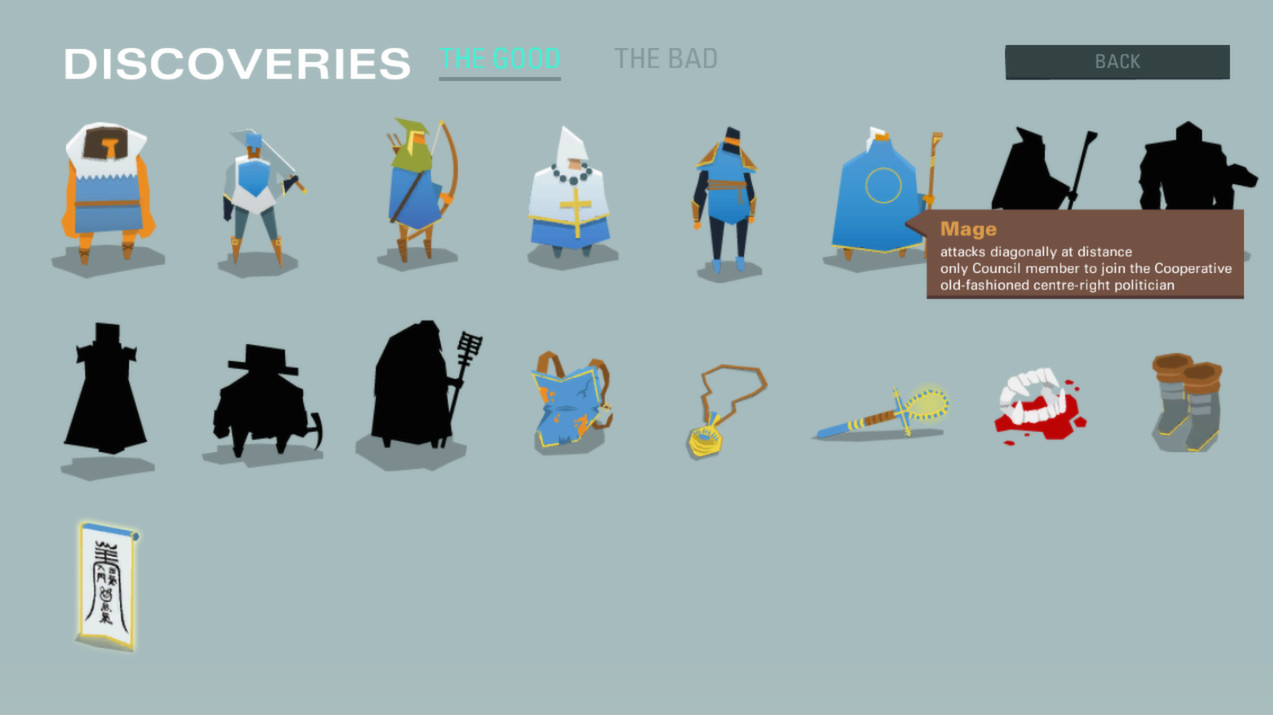 So what is your team even doing exploring dungeons? They’re collecting gold, of course! Each randomly-generated area will come packed with a handful of treasure chests. Sometimes there’s even gold coins scattered on the floor. If you want to play it safe then wayward gold is your best bet. Actually opening treasure chests spawns one or more enemies to the field. At least each chest is kind enough to have a number on top letting you know just how many enemies it generates. You’ll also come across goodies like potions and items. Potions allow characters to use their specific skills which can definitely help in a pinch. Nabbing hearts helps to heal the teammate who collected it. Those other items confer special advantages to the carrying character. These range from granting a heart after killing the first enemy on a stage to boots to save you from lava.

There’s a lot to like in The Nightmare Cooperative but it’s not a perfect dungeon-crawling journey. For example, players don’t really have much control over special skill usage. For example, if two teammates can use their skill, but you only want one character to, there’s nothing to be done about it. Activating a special skill for one character, as with movement, is carried out by others (if applicable) as well. This is a bit more frustrating than it is fun since specials, unlike movement, are limited in use. Controls themselves are also a bit slow in regards to response which feels odd. Finally, it would have simply been cool to see dungeons that were perhaps less claustrophobic from time to time. It’s a shame that the lovely artwork is constricted to just a portion of the screen. 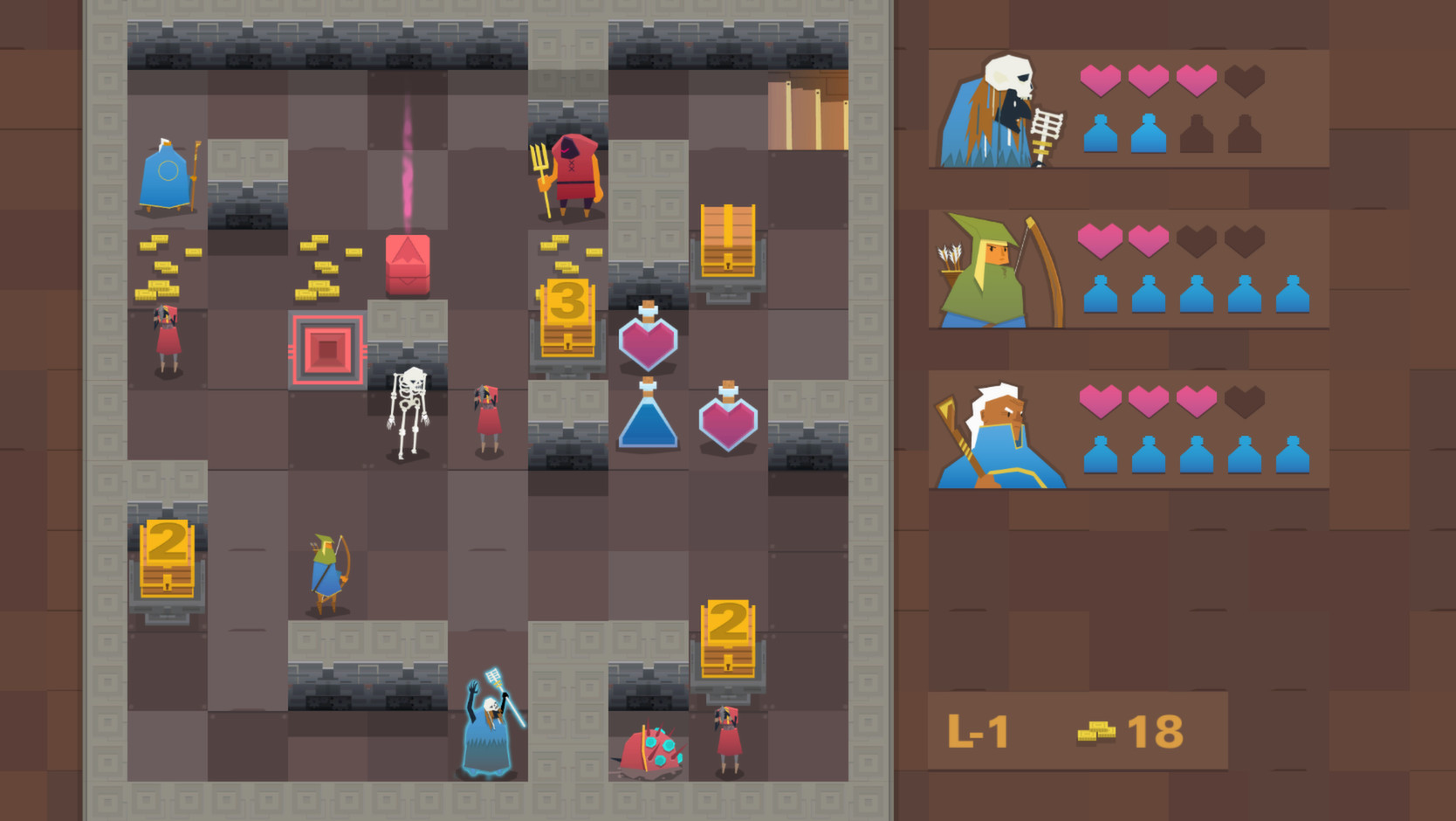 The Nightmare Cooperative is an exciting change of pace for roguelikes. Yes, it still has the random level generation and permadeath, but there’s enough new here to interest players. The multi-character movement mechanic takes practice to work with, but once over the hump, you’ll be able to surmount most of what the game throws at you while still feeling challenged. Give The Nightmare Cooperative a shot if you’re bored by the existing base of roguelikes and dungeon crawlers.