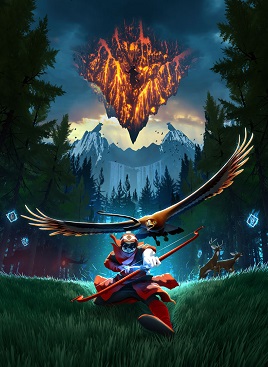 Back in 2016, new indie studio Giant Squid launched their debut title, Abzu, which transported players into an underwater world with a strong focus on exploration and relaxation. The title drew a lot of references to Thatgamecompany’s Journey, which made a lot of sense considering the game reunited its composer Austin Wintory and art director Matt Nava, with the latter now serving as the creative director after co-founding the studio back in 2013. Four years later, Nava, Wintory and the rest of the team at Giant Squid have re-emerged with their sophomore effort, The Pathless, which continues to explore the depths of the small-scale open world genre and test out integrating deeper puzzle solving and combat mechanics. Despite frustrating stealth sequences and lackluster side content, The Pathless thrives on its engaging open-world traversal, thrilling boss encounters and grandiose soundtrack that combine to create a brief but memorable journey.

The Pathless starts off as the Hunter arrives on a mysterious island besieged by a dark curse, with the goal of returning light to the island before its evil influence spreads to the rest of the world. Shortly after her landing, the Hunter comes face to face with the Godslayer, the antagonist who aims to keep the powerful beings of this island known as the Tall Ones under his control in the pursuit of his unknown goals. The premise of the game largely serves as a backdrop for the gameplay, but its clear battle of good vs. evil and natural themes are largely effective and a key motivator to continue making progress through the game, particularly in the final hour. Along the way, curious players can discover additional lore on how this island fell victim to this dark curse by interacting with dead bodies and tablets. Some of these additional bits of world building can seem confusing or not worth your time by themselves, but as a whole they add welcome depth to the narrative that the game could have easily done without, and brings a sense of life to the world that looks dark and empty upon first glance.

As the Hunter, the player is tasked with freeing four beasts from the control of the Godslayer, which can be accomplished by acquiring artifacts that are locked behind puzzles. These puzzles range in complexity but rarely left us stumped during our six to seven hour playthrough, with mostly clear objectives and any resulting frustration usually arriving due to the overthinking of solutions as opposed to hard-to-grasp mechanics or unusual steps to the right answer. Most of these puzzles center around the Hunter’s bow and arrow, encouraging players to shoot through a specified number of rings before hitting its target, or transferring fire between a lit and unlit torch to open gates or pathways. Early on in the game, the Hunter also befriends an eagle that, in addition to providing new traversal options, can be called upon to transport weights or move sliding rings to assist the player in completing their goal. Despite having little precise control over how the eagle behaves, the AI-controlled fowl is capable of following basic instructions, with a simple button press being all that’s necessary to instruct it to retrieve the specified object and bring it as close to the player’s location as possible. A few challenges that restricted the player’s access to the eagle but still required somewhat precise platforming did cause undue annoyance, but for the most part the puzzles are well-constructed, satisfying to complete and should be completable for players of any skill level with little assistance. 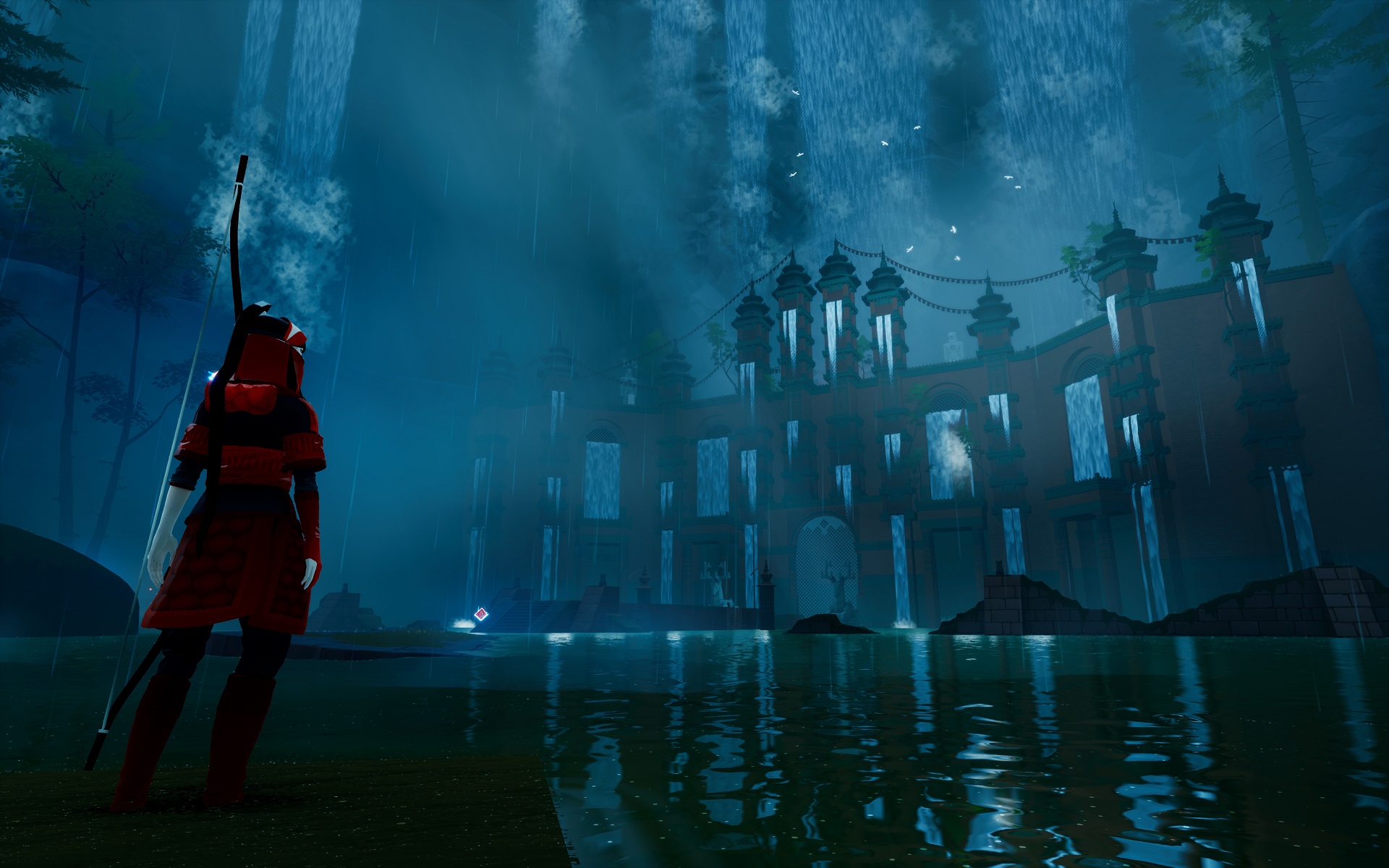 In-between all of this puzzle solving, the player must traverse wide open areas that can seem imposing at first with such a limited stamina bar, but the engaging means by which the Hunter can scale the landscape soon turns this daunting challenge into an enjoyable trip. Diamond-shaped talisman are scattered across the world which, when shot by the Hunter’s bow and arrow, provides the player with a quick burst of speed as their stamina bar partially refills to allow them to keep their momentum. With the bow and arrow automatically locking on to the nearest target while holding the right trigger, and the sprint button conveniently placed on the left trigger, running across these open fields and hills represents some of the most consistently enjoyable traversal to date, as players quickly get in tune with the timing necessary to prepare and fire each arrow to make even long ventures go by in a flash. On top of this, your fowl friend can also provide you with additional mid-air bursts to help the player reach higher locations faster and can glide off of tall locations as players set out in search of their next objective.

With a title like The Pathless, one could expect the game to provide little direction on exactly where the player should head next to complete their goals. This is true to an extent, with a basic UI and little hand holding outside of the opening hour, but fortunately the Hunter also has access to a mask which, when equipped, highlights areas of interest in their immediate vicinity in red and shows their previously traversed paths in a lighter shade of blue. This mask also comes in handy for the trickier puzzles, as key items for the task at hand are shown in yellow and hidden doorways can also be located with the mask. Unfortunately, there’s no clear way to distinguish which areas of interest are necessary for progression and which are purely optional, which can occasionally be aggravating when trying to track down the final artifact in an area. This would be less problematic with more engaging side content, which come in various forms including time trials surrounded by butterflies or more challenging puzzles, but the rewards for these excursions are almost always yellow shards that slowly fill up a meter that provides an additional wing flap for their eagle. With almost no variety in your rewards and the substantial amount of shards needed to gain even a single flap upgrade, these optional activities quickly feel routine and unimportant, which could have been avoided with the addition of different bounties such as new ways to customize your Hunter. 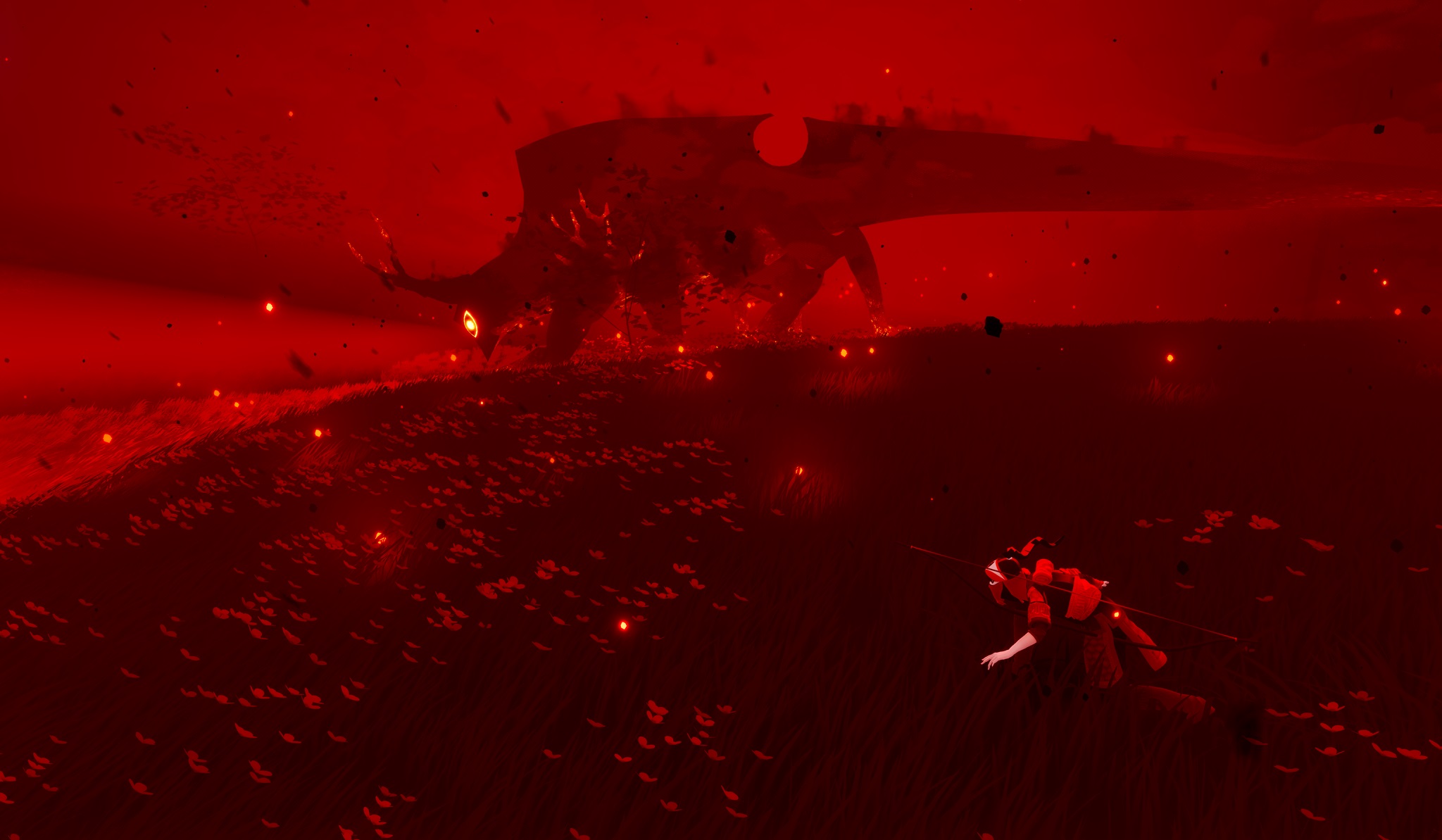 As you traverse the world in pursuit of artifacts, a giant section of the landscape will be encased in a giant, ominous red orb, where a larger-than-life beast resides under the control of the Godslayer. If the Hunter ventures close enough, the player will be enveloped by the red bubble and lose access to their eagle, as they are forced to stealthily rescue their flying companion while avoiding the line of sight of the resident creature. These sequences are terrifying at first, but quickly grow frustrating as they halt all progress being made towards your next destination, and can end far too quickly with little room for failure as the monster sends the Hunter flying and causes you to lose a portion of your previously acquired yellow shards, which continues to lessen the need to go out of your way and complete side objectives. Fortunately, the Hunter can turn the tables on the beast after collecting enough artifacts, as the towers shine light on the red orb and send the behemoth running away, signifying the start of some of the most memorable sequences. At first, the Hunter must master their traversal abilities and chase down the fleeing creature, avoiding fireballs raining from the sky and firing arrows at its weak spots to deal the first blows against it. Then, the creatures retreat to an arena where a multi-stage boss battle goes down, with plenty of variety in the different kinds of attacks to avoid and moments of weakness to take advantage of in one-on-one brawls that both challenge and amaze as plenty of thought was clearly given to how each showdown plays out. Even in moments of failure, the game rarely punishes the player too much, instead opting to lessen your stamina or knock the Hunter out of the arena, giving the player a moment to breathe before they ascend back up to the battlefield and attempt to take out the beast once and for all.

While The Pathless’ graphics may not regularly inspire the same sense of awe as the likes of Abzu and Journey, there are still plenty of astonishing sights to see throughout your adventure, particularly during the aforementioned beast showdowns or when gliding through the air and taking in the world around you. The environments are often encased in darkness, but the game offers little for the player to do in them after returning light and beauty to the region, instead shuffling players along to the next overcast area. But the true highlight of The Pathless’ presentation is its epic soundtrack, with a huge variety of tunes that range from grand orchestras to peaceful melodies that inspire a greater sense of wonder and connection with the natural themes that pervades the world and story. While these tracks fit with the action on screen most of the time, there were a few occasions where the focus necessary to determine the solution to the puzzle at hand was made a little more challenging by the loud background music. Outside of the aforementioned optional areas, the game offers little reason to return to its open world after completion, which makes its relatively brief runtime and launch price tag of $40 seem a little more questionable, but thankfully there were next to no technical issues during our time with the game. 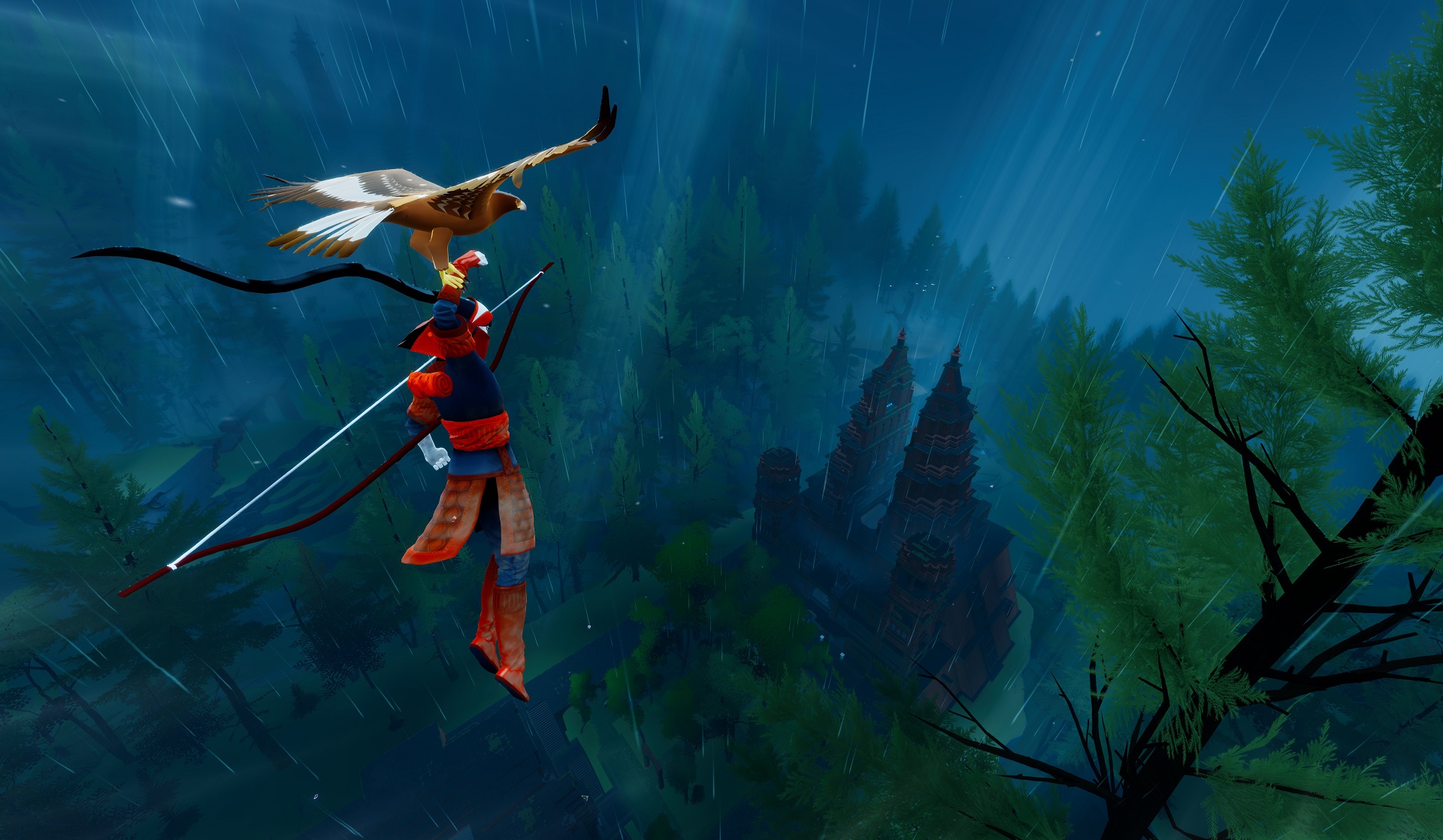 The Pathless is an enjoyable adventure to a serene island filled with satisfying puzzles, mesmeric traversal and gripping boss showdowns. Some small frustrations, including unnecessary stealth sequences and little reason to deviate from the main objective, hold the game back, but the polished moment-to-moment gameplay combined with the inspired soundtrack make for a pleasing and fun experience that’s easy to recommend to fans of open world and puzzle games.