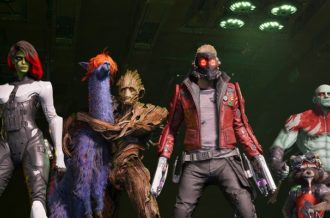 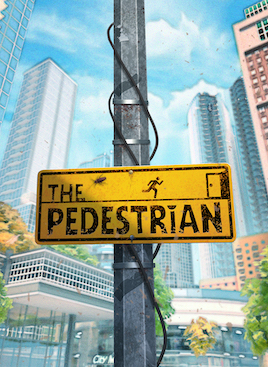 It’s amazing how even the most mundane of things can harbor such intrigue. For a game all about signage — on guiding your trustee stick-man (or stick-woman) from one enclosed surface to the next — Skookum Arts, in their debut effort no less, have managed to approach a topic as commonplace as signage, yet somehow find huge potential within. Potential in both an artistic sense — the textural shift as panels interchange between metallic, paper and even electronic surfaces at points. But crucially, in a gameplay sense as well. For something as sophisticated, as epiphany-creating, that the puzzle genre is, The Pedestrian quickly and successfully pin-points the kind of response it’s aiming to evoke.

Marking itself down as yet another example of seemingly minimalist presentation, masking an otherwise tasking but wholly delightful series of tricks and temple-clamping conundrums. Conundrums that only grow more elaborate and more ingenious as you progress through what is a rather brief, but far from forgetful little title. In another scenario, it would’ve been likely that The Pedestrian‘s appeal — had it remained confined to that same 2.5D hopping from one puzzle to the next — would’ve been limited had the experience remained fixed to its gameplay. Instead, Skookum Arts’ decision to transport a player’s attention in, out, up down and all around the expanse of the interconnected city environment only bolsters the level of charm this particular puzzle game carries through with immense success. The way the camera slides, flies and weaves in-between foreground and background — select puzzles stretching so far as entire streets and warehouse spaces alike. Even the way the options screen is viewed through a dramatic cut to one of the many, in-world CRT televisions dotted about.

Granted, the inclusion is purely artistic and while it’s a shame that Skookum Arts don’t do much with this presentation to illicit some manner of narrative reveal (an explanation perhaps as to why this city is so eerily absent of its presumed populous, outside of passing vehicles on occasion), it’s a simple decision that gives one’s journey a quaint, fond touch of purpose. A feeling reminiscent of a game like Linelight — whose own implied 2D presentation made brilliant use of its very progression to offer such a shockingly unexpected weight of emotion in its latter parts. Particularly with the way the”stages” (for lack of a better term) find a way to circle-back on themselves at points — easy as it is to spot previous puzzles off in the background or inside buildings alike. There’s novelty to the way The Pedestrian uses its literal world — this city of warehouses, sewers, train-lines, city streets and the sides of residential apartments alike — to base its puzzles, even if such glances are easily dispensed with. 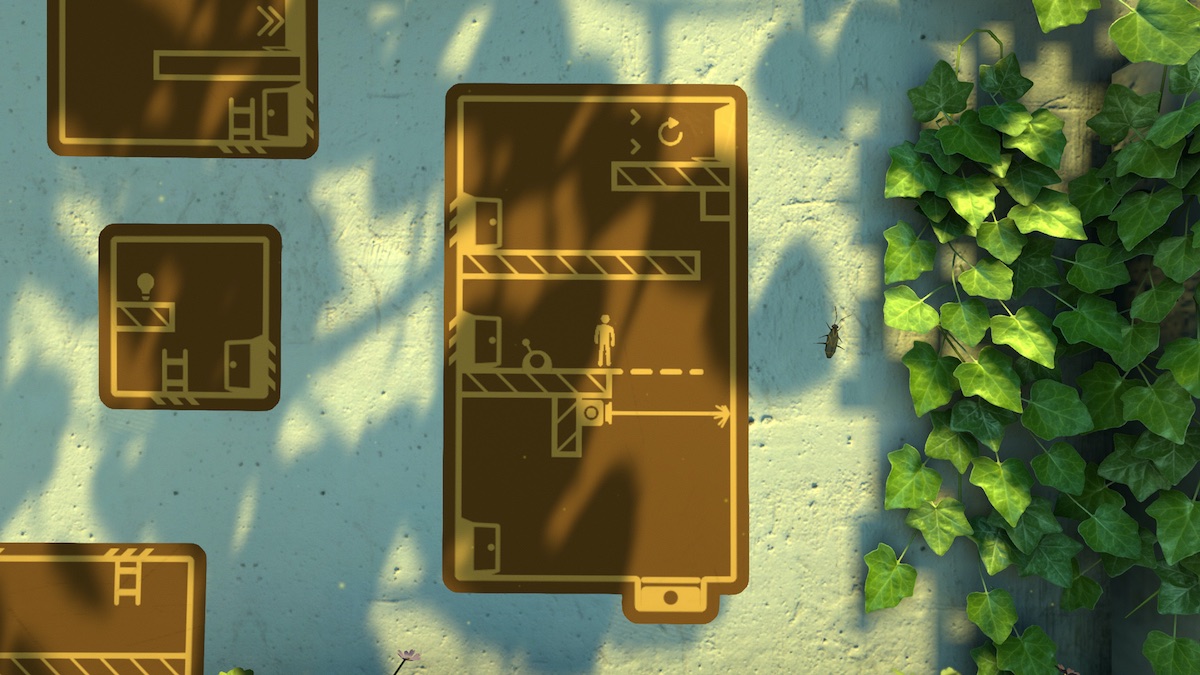 But of course the mechanics of its puzzles — and the gameplay tools provided to the player — are where the real joys and eventual triumphs are housed most visibly. The general idea behind most of the solutions lie in creating a network of routes between panels for your stick figure to make their way through. Joining up doors of opposing sides (and only opposing sides); likewise with ladders that connect the bottom of one panel, with the top of another. But what starts off relatively simple early on fortunately cranks up its difficulty at a well-tuned pace throughout. Introducing such things like switches, instant-kill traps and even a weird, subversive interpretation of Tetris-like arrangement with the way players frantically have to organize/reorganize panels so that routes, despite being able to criss-cross, remain linked relative to their positioning. All the while making sure that one doesn’t accidentally alter the route already put in place — resetting the puzzle as a result due to it becoming, technically, unfeasible.

If it sounds like a lot to consider — especially in the span of one mere puzzle, for a lot of the scenarios — it usually is. But never does this demand for multi-tasking feel overwhelming or even irrelevant to what the game is trying to show. The Pedestrian does a wonderful job at building on its premise as before long the bizarre and often ingenious ways the game makes use of the space both in and outside the confines of its signage panels become another joy to behold. Core ideas in each its solutions requiring you to not just undergo some recognition of a hidden route, but also some logic-based tinkering and even spatial awareness too — the aforementioned Tetris-like leanings growing more and more prominent. The game is clearly confident in how quick players will be to adapt to the rules and systems in place, and despite it sounding risky in its self-assuredness, the approach pays off superbly. Resulting in a string of well-crafted and tactically-focused incidents that task players to really think long-term about how to approach things before going hands-on. Not unlike Baba Is You, whose own experimental tinkering was as much about careful planning as it was pure trial-and-error. 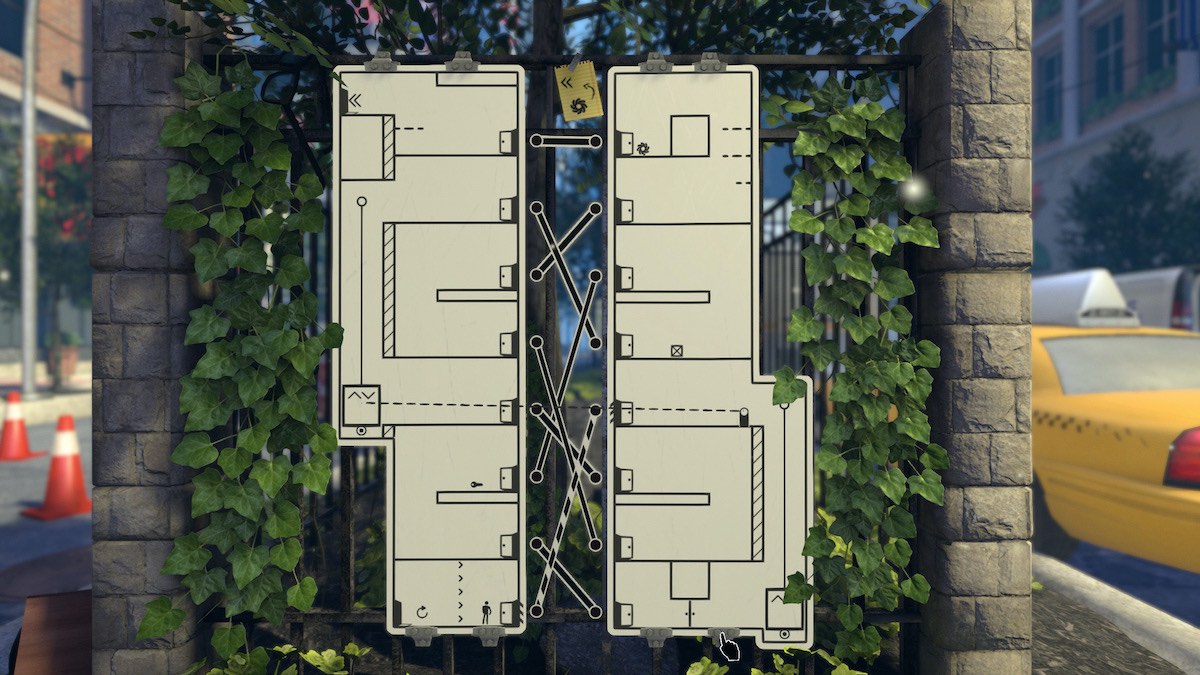 Better still, late on the very layout of environments become baked into the puzzles themselves. Panels of varying shapes — regular and irregular alike — cut off from one another, even finding novel ways to combine all of the previous gimmicks and mechanics to delightful effect. Interaction with the environment, as well as a spot of split-second, button prompts and quick reflexes jostling for top billing. The Pedestrian is a game crammed full of small ideas, but the pay-offs remain immense. Easily the game’s greatest accomplishment is in how easily — and more importantly varied — it mixes things up, how it combines so many elements in ways that seldom feel cumbersome or bloated in some vague attempt of complexity.

How it even turns the previously-perceived conventions of its gameplay on their head. The ability to hop between panels without any need for a link or bridging between panels in one instance; a mechanic that prevents certainly-selected elements from resetting. The very idea of having to reset a puzzle in order to solve it — having been a dreaded risk previous — becoming crucial to the path forward. Another one of those “wow” moments that both delights and intrigues as to its later efforts, a feeling The Pedestrian almost always finds the means to repeat all over again. Even the way the game balances out puzzles orientated more towards spatial awareness, with those leaning more on connecting the [figurative] dots in the right order. Those of which that are self-contained, balanced out with those that find neat, clever ways to incorporate the “outside world/environment” alongside.

It’s a shame that, so far as progression goes, The Pedestrian does fall back a few too many times on that favored sealing-off the main path, forcing you to split off into multiple paths, so as to gather crucial items that eventually unlock the way forward. While Skookum aren’t the only developer in the genre’s history to fall back on this trope, it’s a shame that the game decides on such heavy use of this evidently time-padding design trope. Only for that same structure to repeat…and repeat once more. While it’s far from a detriment to the puzzles themselves — salvageable as it is that the transition from one surface to the next amidst the aether of the environment is still pleasant to watch — it’s the only real major element that appears a little too often. Another major criticism that similarly isn’t hard to spot (and is by no means easy to ignore) is the quality of select textures and models. Notably during the train segments, the means with which the game carries you from one “area” to the next. Regardless of how high the resolution of your screen is during play, The Pedestrian has an odd way to rendering certain objects and effects on occasion — disappointing as it is that a gameplay loop so strongly built is met with a lack of equal care in the visual department. 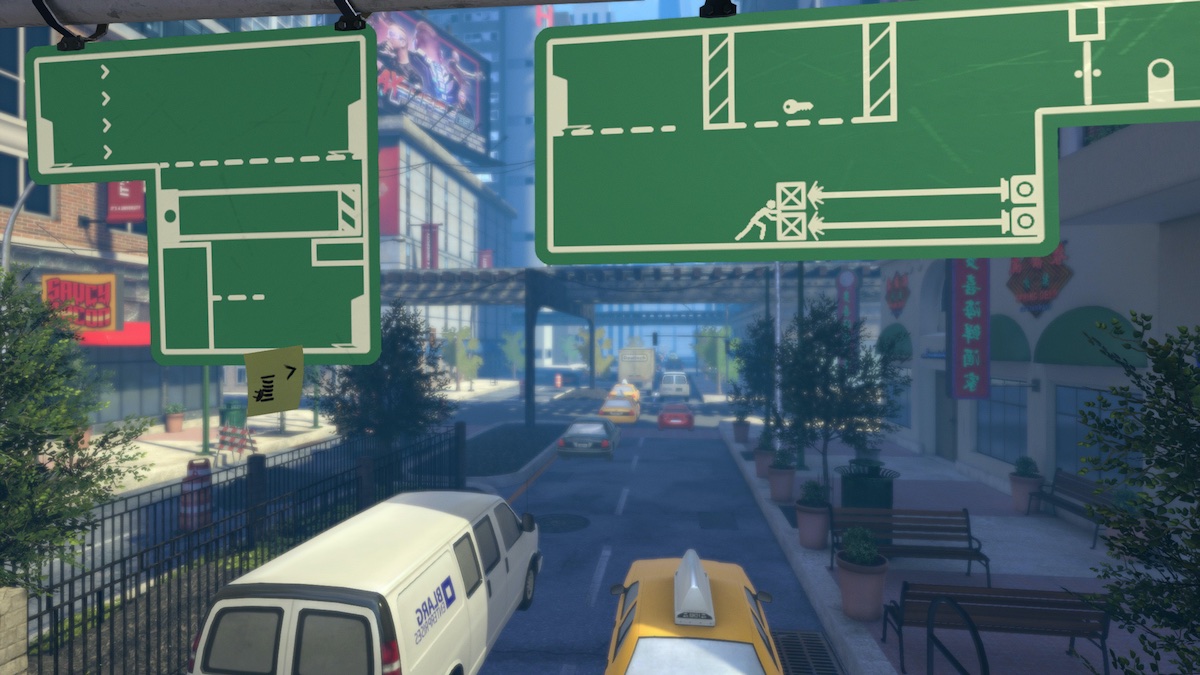 Even with its unfortunate dip in visual quality from time to time, that aside, a lot of the points held against Skookum Arts can be admittedly put down to personal aspirations not met, rather than some fundamental flaw the game is undeniably guilty of. An aspiration easily ignored for The Pedestrian is a charming-enough, but crucially, surprisingly-inventive puzzle entry for a concept and premise that, on paper, sounds far from inviting. But whether it’s the complimentary add-on of its voyage through the environment — and the way the game makes one’s trip a pleasant scurry from one city region to the next — or the ample ways the game adds-to, subtracts-from and so easily flips former rules/conventions on their head, The Pedestrian taps terrifically into the many joys, frustrations and epiphanies that this genre of video game is so good at carving out. Clever, confident and a fine debut for Skookum Arts, The Pedestrian has established a clear high bar — marking itself down as this year’s first must-play for puzzle enthusiasts far and wide.