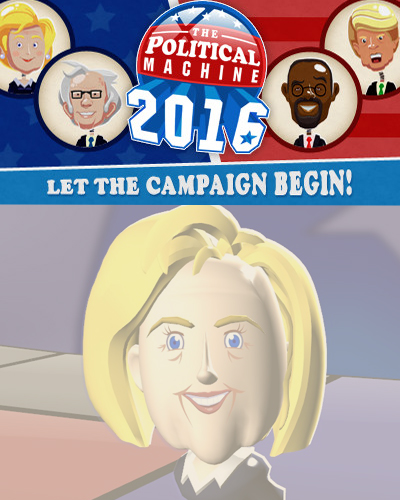 Part comedy, part drama, part circus and part solemn ritual, American election year politics gather a wide spectrum of adjectives and even the world at large finds the process fascinating, amusing and indecipherable. Whether you have disdain for the less noble aspects or keen interest in its machinations, you’ll probably find something to hook you while playing The Political Machine 2016. Take it seriously or play it like a total douche — not unlike the real-life candidates — the game will accommodate you.

The Political Machine 2016 is the most recent iteration of a long running series of turn-based strategy/simulation games that pit the player against their choice from over a dozen would-be leaders from all across the political spectrum. The goal, of course, is to win enough electoral votes to take the Presidency, and like any journey the process is fraught with danger, surprises, double dealings, scandals and the manipulation of the electorate.

While The Political Machine 2016 has some fairly sophisticated concepts underneath the hood, playing is simple. You begin by selecting one of the real candidates or rolling your own. Designing your own fictional politician from the ground up involves not just fashioning a cute but somewhat limited bobble-headed avatar, but assigning some important starting stats like money, charisma, influence and stamina. All of these characteristics have important consequences down the line and like most RPGs, they can be modified as the game progresses. Next, you have 100 points to use in aligning your candidate for or against a lengthy list of current hot-button issues like gay marriage, global warming, election funding and many more. By the end of the creation process, you will have a candidate that can be fiercely independent, wildly liberal, extremely conservative or a near infinite combination that neither offends or appeals to anyone. From here, it’s off to the race. 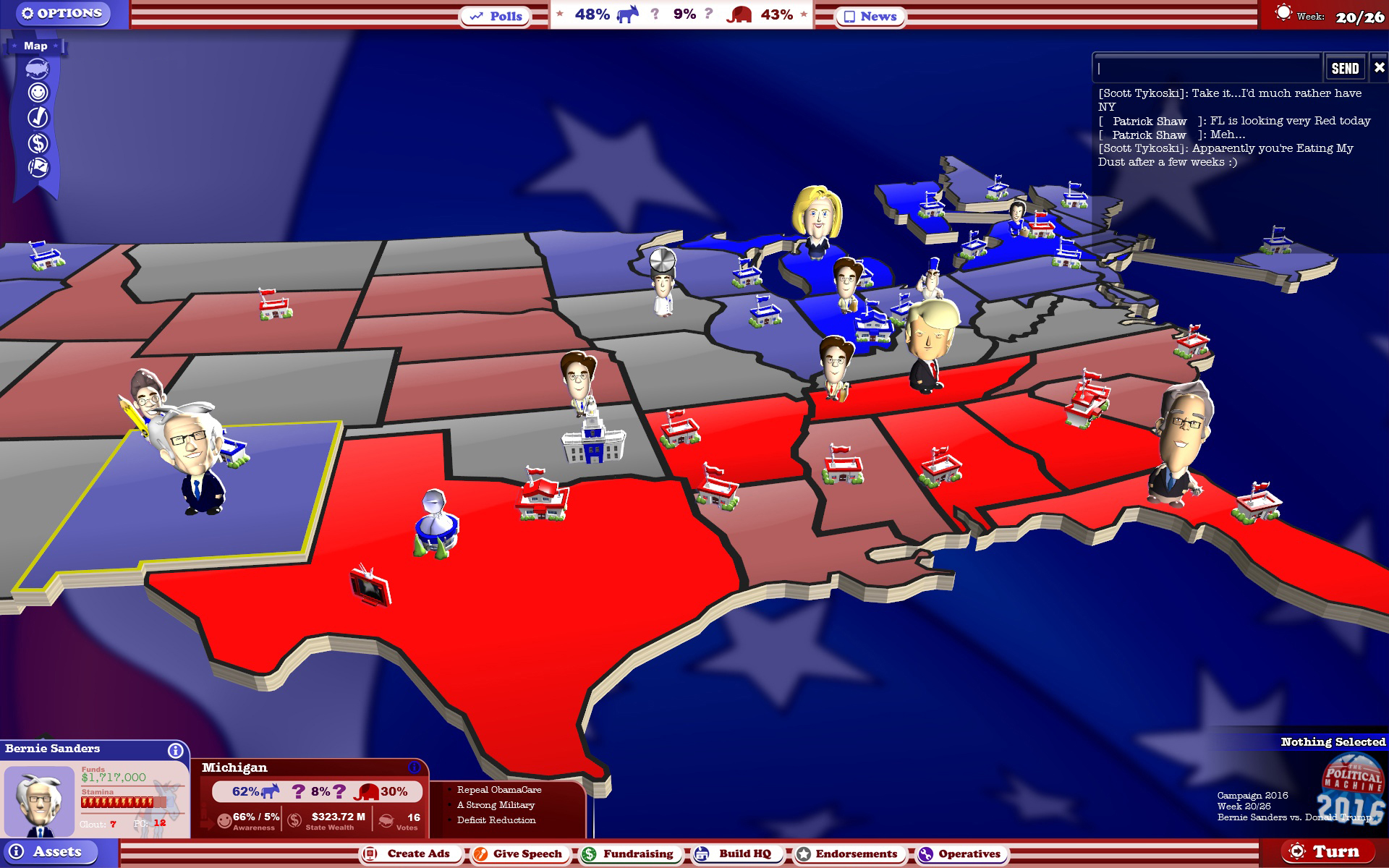 The election process in The Political Machine 2016 can last anywhere from 26 weeks — which pre-assigns several states for or against you — to a more protracted 52 week campaign in which your candidate has to earn each state one by one. Of course, even committed states can turn against you and you can always capture those of your opponent with the right combination of money and message.

In each turn, you have a certain number of activities — determined by stamina and money — in which you can engage, like giving a speech, investing in advertising, establishing a campaign office, etc. Each activity involves at least a few choices: do you give a speech in favor of an issue, or slander your opponent and lie about his or her position? How much do you spend on campaign ads and about what issue? Do you open a campaign headquarters or a shadier office that hires thugs to intimidate the voters? Each choice has a positive or negative consequence that is tied to your stats, and the general political leanings of the state’s population.

Frequently, special pop ups indicate a unique opportunity, such as appearing on the popular news program “60 seconds,” taking a bribe, accepting help from a popular union or celebrity, or the appearance of a headline-grabbing story that influences the polls. Part of the game’s strategy is having enough stamina to take advantage of the special circumstances. Speaking of polls, you can check them at any time and they will tell you how your candidate is faring on a wide variety of issues, allowing you to adjust your strategy on the fly.

Played seriously — a little hard to do given the graphical style and lightheartedness — The Political Machine 2016 can be challenging and is probably legitimately educational, especially for younger gamers who might not be familiar with the campaign and election process. Of course, the real temptation is to play a clownish extremist that polarizes voters or be the underhanded politician that is more interested in character assassination and making money than winning the election. In The Political Machine 2016, just like in real life, extremists have a harder time with credibility than the middle-of-the-road politicians. 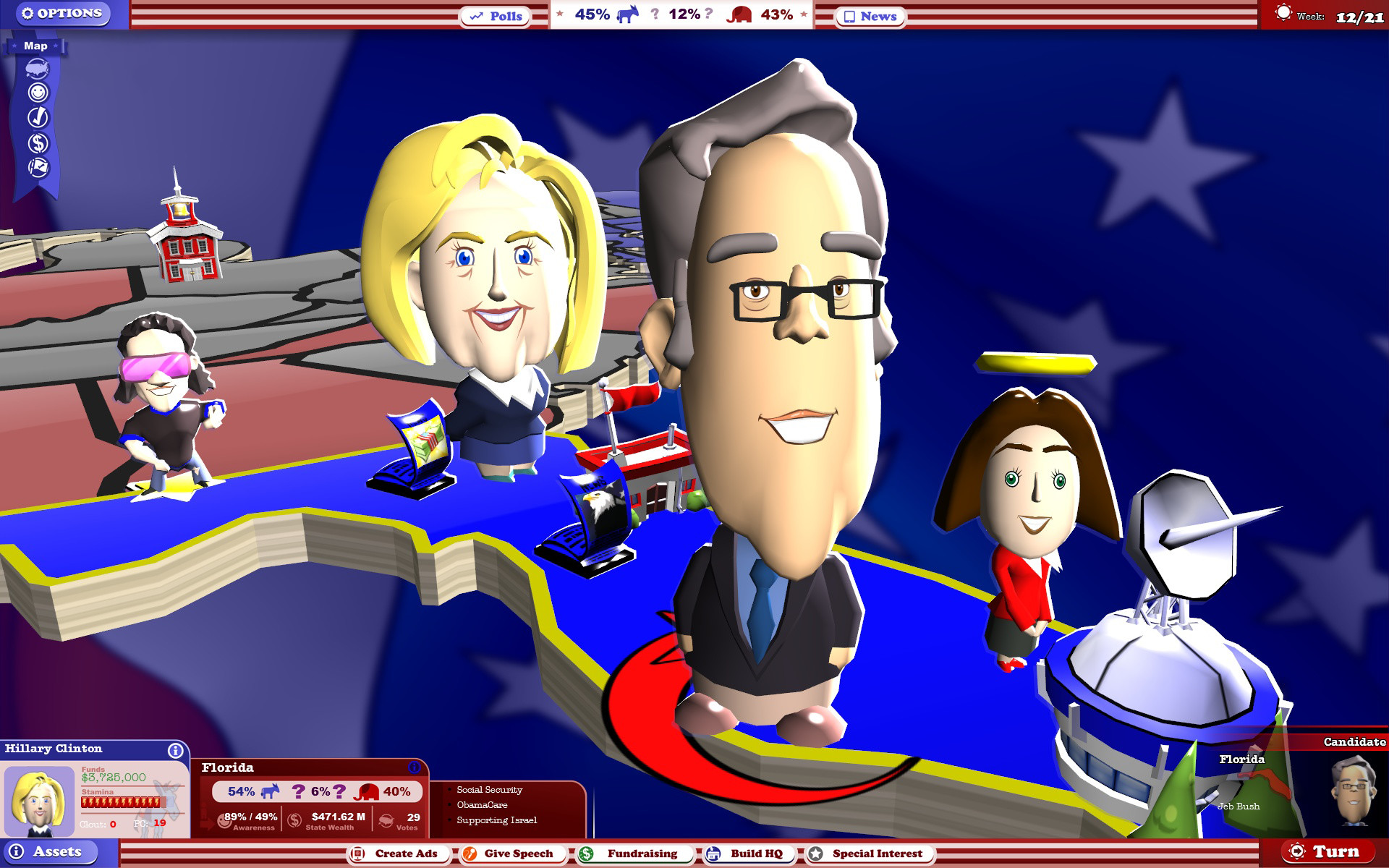 There is depth and relevance to The Political Machine 2016’s gameplay and content. It’s easy to pick up and play and whether you take it seriously and really play to win or approach it with less reverence, the game will accommodate you. Because it is so tied to the issues and candidates of the moment, it is both amusing and instructive, but probably not something you’ll want to revisit after next November.