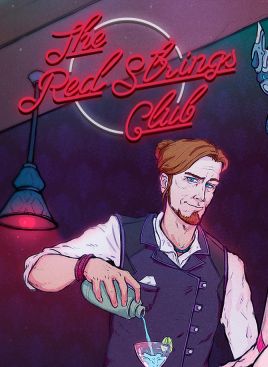 Three and a half years ago, developers Deconstructeam released a title known as Gods Will Be Watching, a unique take on point-and-click adventure games set in futuristic world with several moral choices and options leading players to question what is and isn’t the right thing to do. Reactions to it were mixed back then, but now the team are back again with Devolver Digital to deliver The Red Strings Club, a new graphic adventure in a slightly similar vein. In this case, though, things are a bit more down to earth, dealing with barroom conversations instead of hostage negotiations or the like. But will this game and its drastically different setting shake things up a bit, or serve up something flat?

Set in a cyberpunk future, The Red Strings Club sees you playing as Donovan, the mysterious proprietor and bartender of the equally mysterious titular club, who also works as an information broker that uses the intel gathered to pull various strings (hence the name), along with his rebellious hacker friend Brandeis. When a wounded Akara android from the corporation Supercontinent Ltd stumbles in with news that one of their associates died upon discover rather shocking information concerning Social Psychic Welfare, a program set to monitor people with cybernetic implants and eliminate the likes of depression and xenophobia from them, the two set out to discover just what’s going on with Supercontinent, leading to some rather hefty twists and the eventual attempted takedown of the company’s project.

Gameplay-wise, the vast majority of the game is dialogue-based, focusing on Donovan as he attempts to gather information on Social Psychic Welfare via the patrons with links to Supercontinent. As expected, this involves navigating dialogue trees and attempting to make the best choices possible to get you need. The twist here, though, is that Donovan can actually see certain emotions lurking within his patrons, and can whip up drinks that trigger said emotions when properly made. In doing so, this allows the other person’s responses to be altered, sometimes providing new information in the process, in a particularly neat twist on the traditional branching narrative (the “strings” of which you can view at any given time). 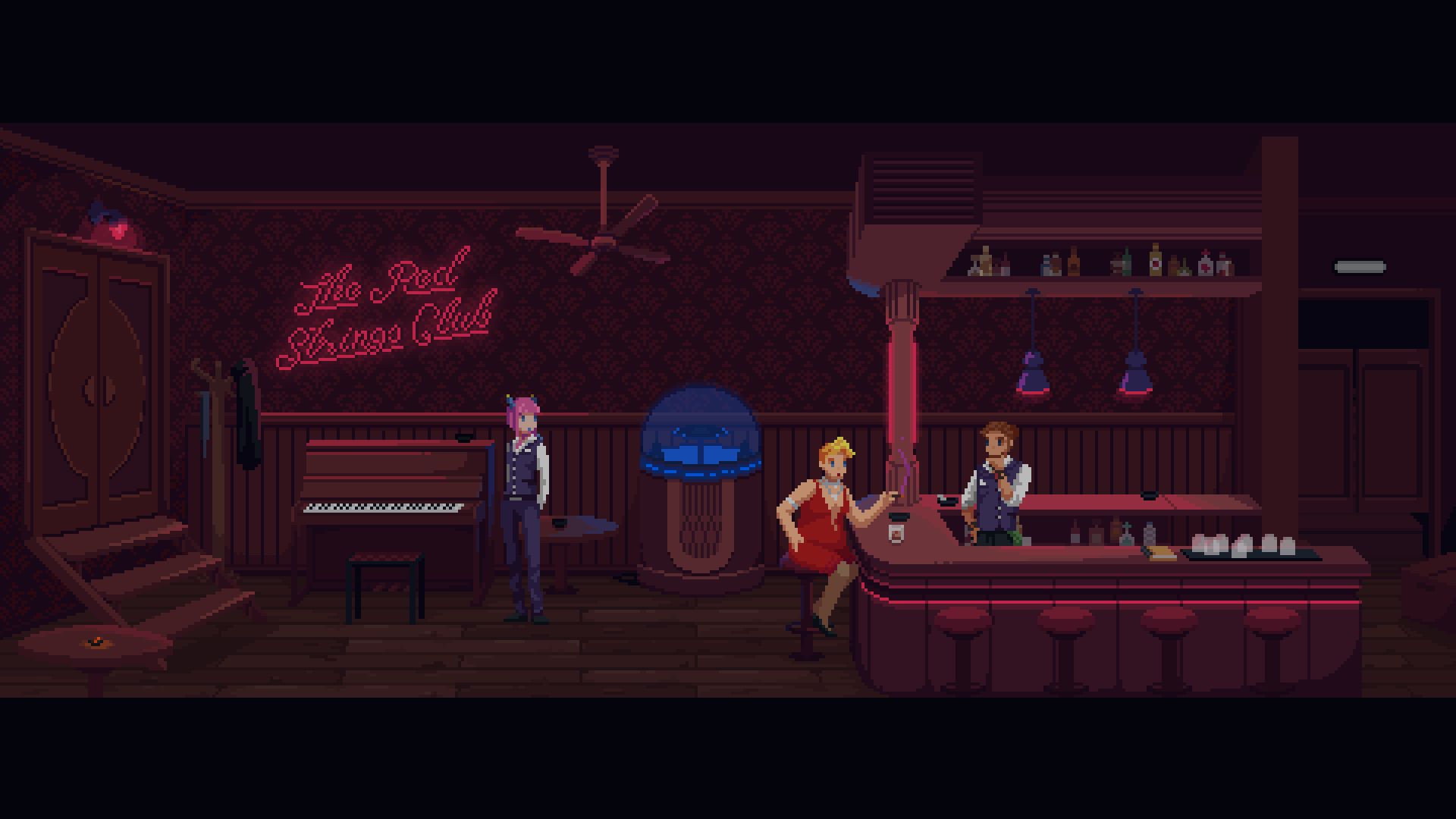 Said drinks actually require their own mechanic as well, where you go behind the counter and have to mix together the right cocktail in order to move a circle in order to have it align with the emotions seen on a customer’s silhouette. This involves having to use one of four liquors to have it move horizontally or vertically, or a shaker to mix them together for diagonal movement, ice cubes that change the size, and a few special ingredients introduced later. It may seem a bit tricky to control at first – especially when having to hold down the mouse button while moving it in order to pour from a bottle – but it becomes easy to learn quite quickly, and ends up being rather fun to play around with.

But yes, aside from a few scenes where you play as Brandeis and one with Akara with a couple of different mechanics, the main parts of The Red Strings Club see you pouring drinks and attempting to coax secrets out of various people through bar chat. It’s a bit reminiscent of the last Devolver-published adventure game, Stories Untold, in that it takes a rather minimalistic approach to things and has a much larger focus on the narrative as opposed to visuals. In fact, I only counted about nine whole screens in the entire game, set across five different locations (some just visited briefly). That may seem like a turn-off to some people hoping for a little more variety when it comes to having something to look at (though the pixel art is still impressive and the soundtrack highly enjoyable), but trust me when I say that the story is worth it. 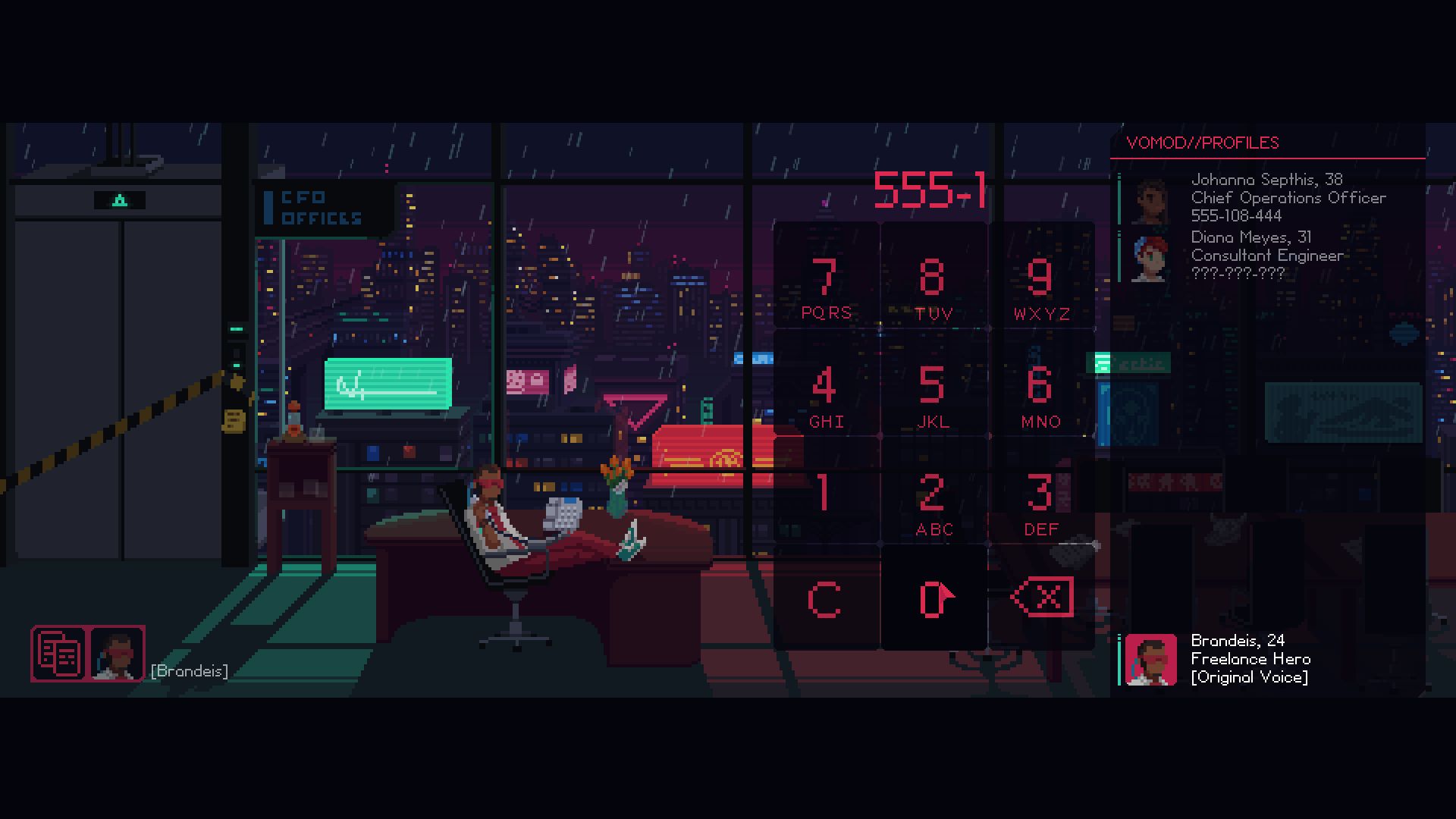 The main reason for the narrative’s success lies within its cast of colorful characters. Even when dealing with those who have loaded themselves up with various cybernetic implants, The Red Strings Club manages to bring out all of their humanity in various ways (with Donovan himself being nicely snarky, mostly optimistic, and likeable). Everyone you meet is fully fleshed out, with the dialogue your cocktails give them being enjoyable to listen to, even funny sometimes. You really get to know these people and how they actually feel about how Social Psychic Welfare and the effect it could have on society. For that matter, in a surprising change of pace, Supercontinent is never depicted as the type of one-dimensional corporation you may expect from your average cyberpunk story. The various employees instead just come across as average workers trying to just do their jobs, even managing to put up valid defenses for SPW at times.

In fact, a lot of the game’s dialogue will have you engaged in various debates over the topics that Social Psychic Welfare brings up. Ethics, emotions, marketing, free will, progress…things can get surprisingly deep, even when dealing with the resident office party girl. Sure, Social Psychic Welfare may sound like brainwashing at first, but what exactly would you do if you had a way to prevent crippling depression and suicidal thoughts without anyone realizing it? It’s only enhanced further by Akara delivering you quizzes after each customer, wondering if you can actually decipher how they truly feel, potentially empathizing with them and rewarding you for it. And the payoff for all of this when you actually get to infiltrate Supercontinent is a rather shocking climax that’s worth checking out.

If The Red Strings Club does have a notable flaw, it would be the same flaw that a lot of similar story-heavy adventure games have these days: Length (yet again). The whole game should take about two and a half to three hours to complete (depending on how deep you want to explore things), and while the story fits into the timeframe perfectly and never wastes a moment (although there are a couple of points concerning Donovan that seem to blatantly get brought up for a possible sequel hook at the end), it could use just a little more meat in the gameplay area. I was disappointed that Akara’s opening with a gameplay mechanic where you work a lathe to sculpt personality implants never gets brought up again, since it was rather unique and made it seem like it would play a key part beyond two initial choices. And maybe just one or two other patrons to talk with could have helped as well. But hey, the fact that the game kept me wanting to talk with its characters is always a good sign. 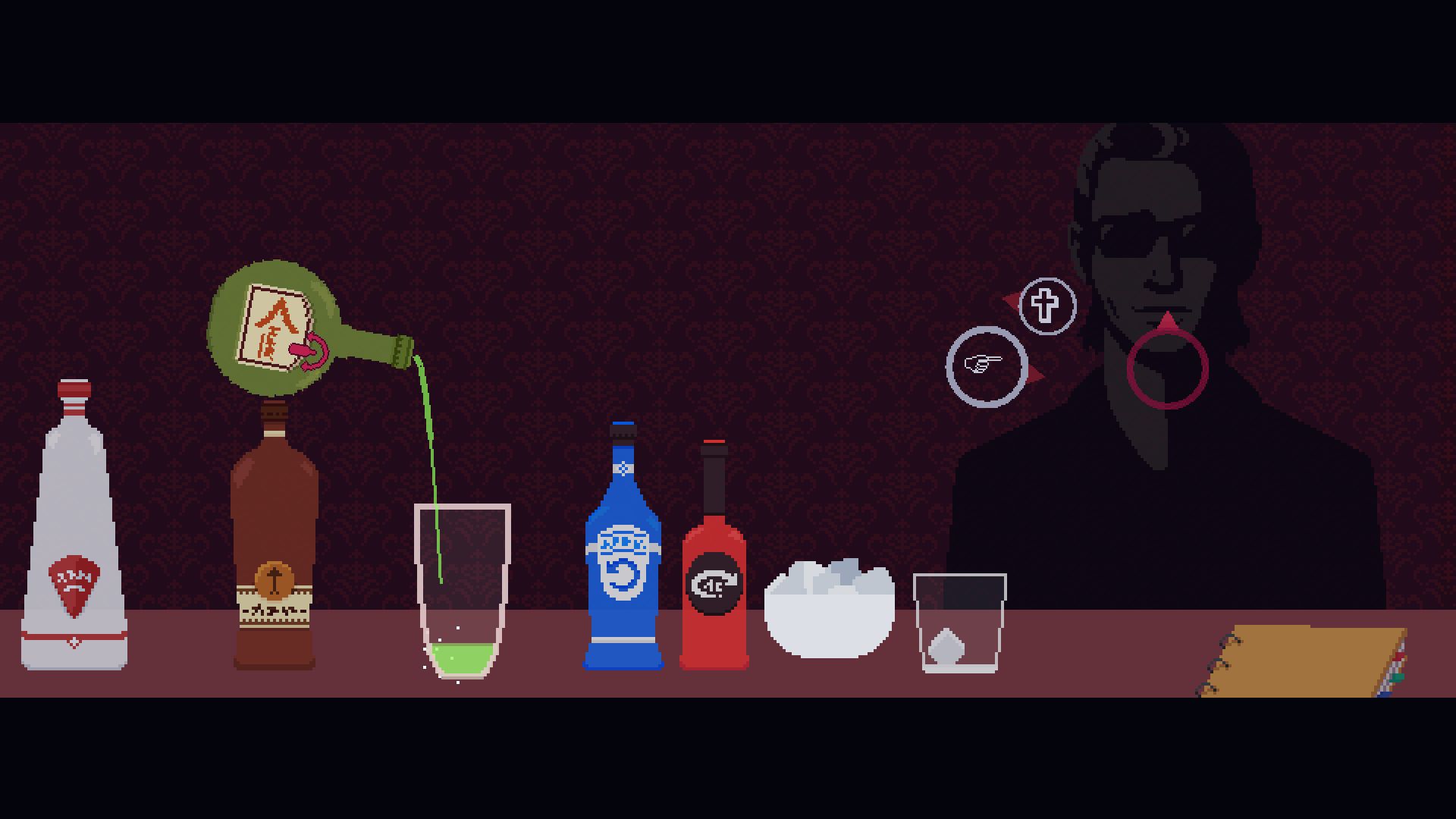 Thanks to an incredible and thought-provoking story, a cast of well-rounded characters, and simple yet highly effective gameplay, The Red Strings Club easily kicks off 2018 on the right foot when it comes to adventure games. It’s a stellar cyberpunk story that easily keeps you coming back for more, thanks to its multiple narrative options and endings. Deconstructeam should be proud of what they’ve managed to weave together here and it goes without saying that a celebratory round of drinks may be in order.