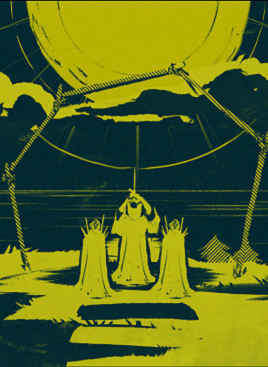 Managing anything is hard work; it means being the big boss, making the tough calls and making sure those under you remain happy. Management might be one thing, but managing a sacrificial religious cult is something else entirely. The very people who follow will give their blood, sweat and tears for the greater good — literally. The Shrouded Isle, from Kitfox Games, is a village management simulator that asks a lot from the player, especially when it comes to choosing who to sacrifice. Make the wrong choice and one of the five houses under your protection is soon throwing a revolt. Make the right choice and appease the family houses, especially when getting rid of sinners, and more importantly appease your god.

One of the best things about The Shrouded Isle is how stripped down it is. It has all the makings of a village simulator, but does a lot of the work so the player can focus on more important things. Like Sinners. Sure, House Keggni might manage food stock, but that doesn’t mean the game demands it from the player. Instead the focus is on how the flock of believers is doing. The main meat is running a sacrificial cult and the god being worshipped is one of the worst in the biz, Charnobog. A Slavic god, or if having seen the original 1940’s Fantasia, he’s the demon in “A Night on Bald Mountain/Ava Maria.” 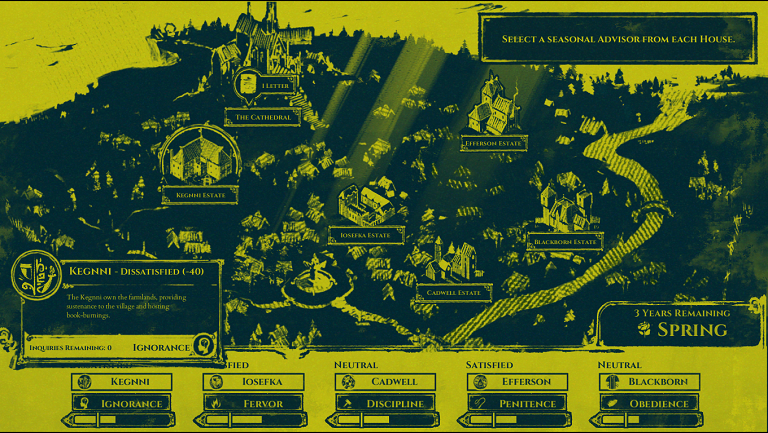 The setup of The Shrouded Isle is that a tiny village sitting by the sea in the player’s control has been waiting 500 years for Charnobog’s return. Only three years remain until his arrival when the game starts, so it’s up to the High Priest to see out those last three years to the best of their ability. This is a bit trickier than it sounds. While the game doesn’t ask the player to manage most things one finds in a village simulator, it does ask full management of the five houses that occupy the village. Each house being distinctly different with how the manage faith. House Keggni grows crops, but they are also responsible for keeping Ignorance a constant. Don’t want the villagers discovering the outside world after all, it’s full of forbidden books which might contain knowledge best not suited for the flock’s eyes. Other houses manage things like, Fervor, Discipline, Penitence and Obedience. With only five houses to focus on, how bad can it get? Pretty bad.

Each house has a family tree to accompany who ever their leader is, the leader never being used. Instead, the High Priest selects one family member from each house every season to manage the appropriate faithful responsibility. What makes it tricky is that each family member comes with a positive trait and a negative trait that will help or hinder faith in a certain area. On top of that is that when the first year begins, only some traits are visible for family members of certain houses. Taking it a step beyond that, to find out more about traits using specific family members to learn their virtue and vice becomes essential. The player can also inquire about family members from the House’s Lord but only if in good standing with that house. Which when favoring one house during a season means disappointing another house. The Shrouded Isle is in constant flux. 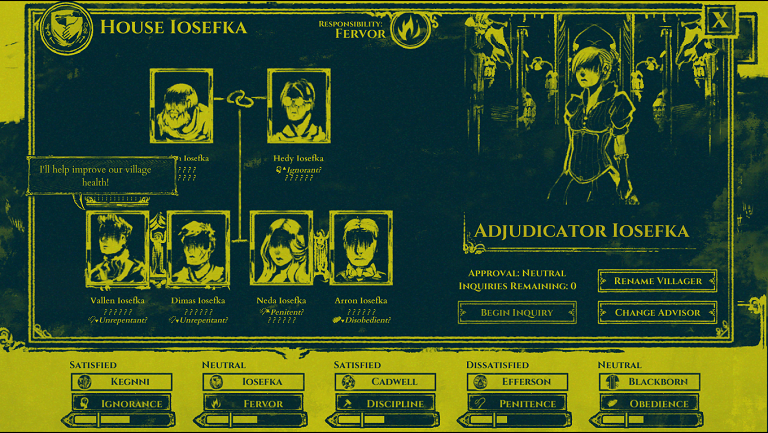 As the seasons play out, and the player is busy learning about each house and which family members are best for overseeing different parts of the faith, a certain god will eventually make its presence known. Charnobog visiting in a dream will ask the High Priest to focus on a specific aspect of faith, as well as asking to begin finding the true sinners. Something like “Find the glutton” or the like, it changes every playthrough. Stack that on top of the other things that change every playthrough — the family members traits -– and it quickly becomes apparent how meticulous choices must be. The real tricky part comes with sacrifice. At the close of every season, after managing faith in all houses, it’s time to select who shall be sacrificed. This is where rubbing a House the wrong way really takes off. In the beginning season, there is a bit of a disadvantage because there’s just not enough information yet to figure out who to sacrifice. This means remembering where standing sits for each House and hoping they don’t go into revolt when sacrificing someone from a House. Sacrificing anyone form a house always has the most negative impact on standing, and if a House revolts, the player ‘must’ appease them next season or they will abandon the faith, game over. The only negative of this system is that there is no looking back on House standing.

Once it’s time for the sacrifice, it’s up to the player to remember where standing sits. If this could be glanced on the fly during the sacrifice it would ease things up a bit. The other part of sacrifice is to figure out who the real sinners are. There is a unique animation that plays out when sacrificing a sinner, so, there will be no doubts. It’s figuring out traits that become the tricky part, it also requires looking at character descriptions and going of the most minimal of clues. Having such a minimal approach though also hinders it and it can be quite difficult figuring out who’s sin’s lie where. More often than not, it’s surprising when sacrificing a sinner. 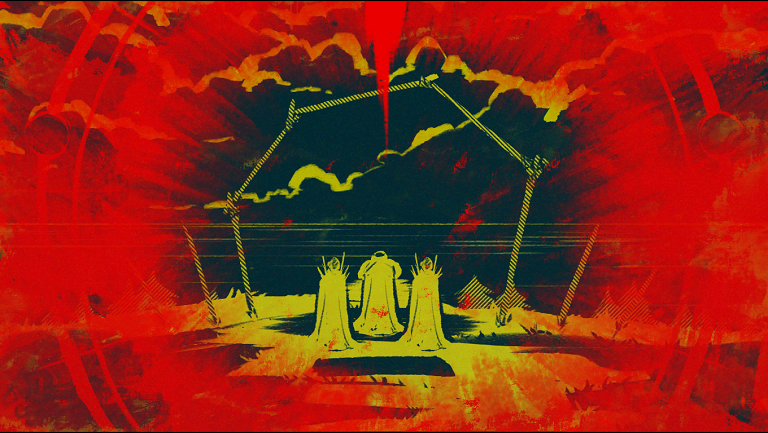 The Shrouded Isle might ask for tough choices, but the fun is in knowing that it’s impossible to make everyone happy. It’s better trying to find the middle ground where The Shrouded Isle becomes about keeping the peace more than playing favorites. Not having to manage resources helps this tremendously, not taking focus away from what The Shrouded Isle is asking of the player. Instead it’s more fun figure out how to balance different family members traits from all the Houses season to season. Encountering someone with an extremely negative vice is common. When inquiring into vices and virtues sometimes it’s better to just get rid of the person who has (-30) attached to a trait, even if they bring something else up substantially. In every play through not once did a virtue reach (+30) and that’s just one more check from The Shrouded Isle that it’s not about balance.

Visually, The Shrouded Isle is accompanied by three appropriate color palates, though the sickly green might be the most appropriate. It adds a certain feeling of dread and disgust that seem to hang from every corner of the game. It’s a constant reminder of just how terrible this whole faith is. These are awful people worshiping the worst possible god, nothing is pleasant about it. Accompanied by the music, which is the perfect amount of ominous tones mixed with despair. The rest of the sound design is top quality too, the sickening swing of the sword as it comes down upon the sacrificial head is too good. Every click with the mouse has impact, heavily weighing down upon the player just as the choices being made. The Shrouded Isle has a certain weight about it that is deeply rooted, not letting go. 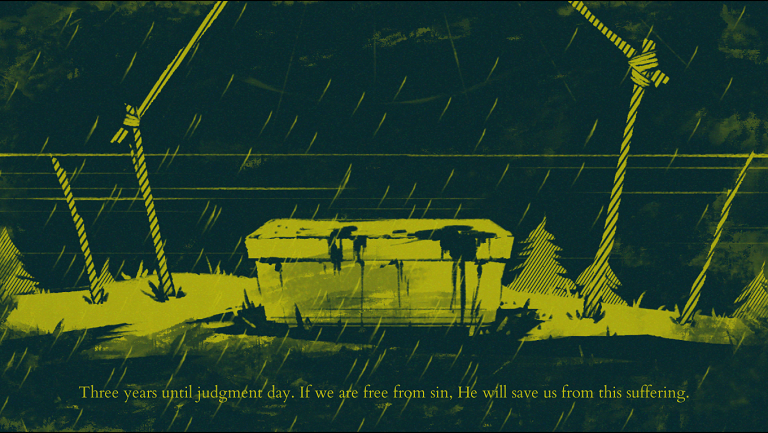 The Shrouded Isle is a perfect game if looking for something quick and easy to play. With simple mechanics that only require the pointing and clicking of a mouse, a narrative that is heavy handed but deeply satirical, it’s easy to get on board. The Shrouded Isle doesn’t ask a lot from the player because it knows it’s delivering a finite ending. The beauty is that each game is relatively quick and the longest it takes to close out the three years is a little over half an hour. It would be nice if it was accompanied by a few more menus or ways to look back on certain stats but it doesn’t hinder the game. Who knew being the High Priest of a sacrificial cult could be so fun?