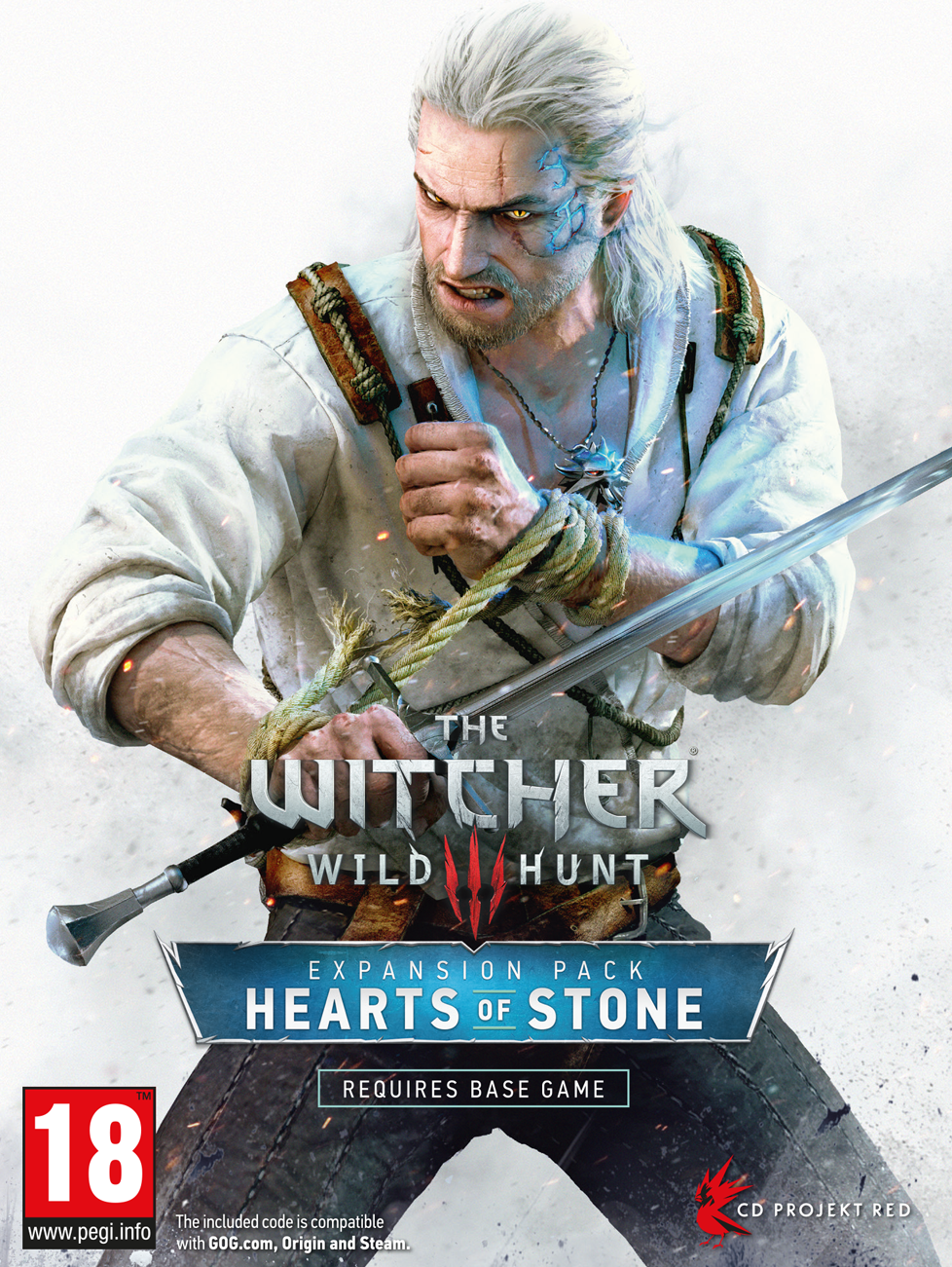 Editor’s Note: This review contains mild spoilers for The Witcher 3: Wild Hunt and its Hearts of Stone expansion.

When we gave The Witcher 3: Wild Hunt a perfect score back in May, it was in large part due to its brilliant storytelling, elegant handling of morality and overall level of immersion. Quite possibly the best open-world RPG since Skyrim, The Witcher 3 showed us exactly what it means to get lost in a fictional world. If you are one of the few who completed absolutely everything in this 200+ hour romp, then Hearts of Stone, the first of two planned paid expansions, will provide you with more than enough entertainment to make the investment worth your money. If you simply want an excuse to dive back into the Northern Realms for more charming and poignant character moments, then it will certainly be worth your time as well. What makes Hearts of Stone everything that fans of the franchise could hope for is its unabashed callbacks to the first game in the series. Considering that there are fans of this series that are always champing at the bit for more of The Witcher, Hearts of Stone is a wonderful love letter to what makes this series so great.

Taking place in the event after the base campaign, Hearts of Stone reintroduces Geralt of Rivia to Gaunter O’Dimm, AKA Master Mirror and the Man of Glass. This particular character, who is clearly more than a mere man, saw a brief moment in the spotlight in the Lilac and Gooseberries quest near the beginning of The Witcher 3‘s story. Though Master Mirror was able to assist you in locating Yennifer, he did not ask anything in return until he helped free you from a certain brig on a certain sea vessel. Insisting that Geralt owes him one for getting him out of a bind caused by a monster contract gone wrong, O’Dimm tasks Geralt with recovering a debt from the morally bankrupt Olgierd von Everec. The catch, because of course there has to be one, is that Geralt must fulfill three of Olgierd’s wishes in order for O’Dimm to collect what he is owed. 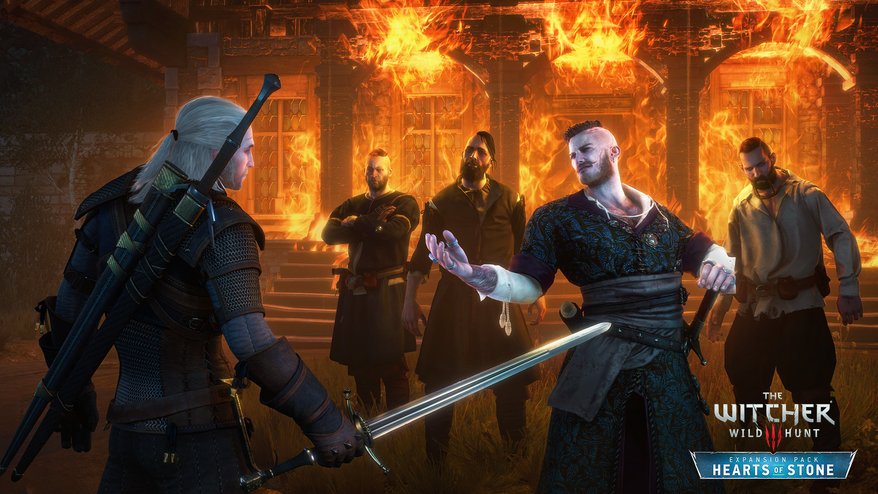 The set up for Hearts of Stone‘s main story quest is notably player-friendly in terms of its pacing, which highlight’s CD Projekt RED’s almost unrivaled commitment to quality of life implementations. Often times, it’s near impossible to know how far into an extended RPG quest-line you are, and this goes doubly-so for narrative-heavy titles like The Witcher 3. The fact that you know that there are three extended main-subquests after the first couple of hours gives you a great idea of how much central content is remaining. Where Hearts of Stone shines brightest is during these subquests, as their character moments create the level of immersion that this franchise hangs its hat on. Whether its Geralt allowing a womanizing ghost to possess him before an evening of wedding reception debauchery or a fantastical Oceans Eleven-style heist, something bizarre is always happening during the course of this ten-hour story. The secret to The Witcher franchise’s excellence is CD Projekt RED’s ability to combine oddity and humanity, and Hearts of Stone‘s central narrative does just that.

While there isn’t any content in Hearts of Stone that rivals Wild Hunt‘s Family Matters quest (likely the best quest that CD Projekt RED has created to date), one particular sequence stands out as uniquely wonderful. Without ruining any of the heartbreaking twists that take place during Olgierd’s third wish, the latter third of the main campaign shapes von Everec into one of the deeper video game villains of the year. O’Dimm’s mystical abilities grant wishes, but getting what you wish is often quite different than getting what you want. Let’s just say that in trying to gain unrivaled power through O’Dimm, Olgierd ended up giving up everything that he holds dear. Consider O’Dimm to be an evil genie whose actions embrace the Butterfly Effect; sure, Olgierd managed to acquire something men can only dream of, but the curse that losing staples of humanity creates a sense of dissonance that rocks him to the fibers of his being. A good story allows its consumers to look deeply into the narrative itself, but a great story elicits deep inner monologues. Make no mistake about it, Hearts of Stone winds up becoming a great story. 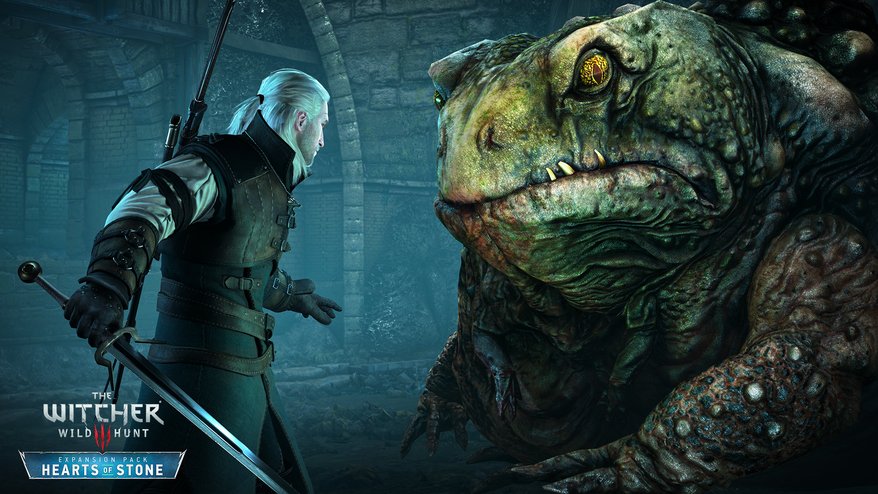 Some of the callbacks to the first game in the franchise, which never appeared on consoles, are a fun way to reward those who have stuck with The Witcher from moment one. One side quest sees The Order of the Flaming Rose, an organization that seems to pop up around every corner in 2007’s The Witcher, make an appearance. If you’ve ever wondered what happened to this once-proud organization after they were briefly seen in The Witcher 2, fear not, as their fall from grace is highlighted in full glory. No major spoilers, of course, but when your organization is in turmoil due to political fallout, you certainly are going to consider some of the more unscrupulous ways to survive. Oh, and in case you were wondering about the elephant in the room, Shani, who plays a potential love interest in The Witcher, has a major role in Hearts of Stone. Her interactions with the ghost of Vlodimir von Everec stand out as particularly jovial and serve as the much-needed lighthearted calm before the storm that eventually approaches. CD Projekt RED is clearly committed to maintaining a universe of continuity, and these throwbacks have to make you wonder what fascinating tidbits a hypothetical The Witcher 4 would contain.

The one minor gripe with Hearts of Stone is its insistance on including combat sequences around every turn. While The Witcher 3‘s combat is challenging and engaging, if a little cumbersome, it’s best experienced in small bursts, as it isn’t as big of a draw as the world itself. There are a couple of boss battles that tread the line between challenging and annoying, namely one involving a shovel-wielding monster who regenerates massive chunks of health whenever its weapon makes contact, and feel more like detours than anything else. Yes, there are some wonderful combat moments here, but it would be surprising if anyone complained about a bit less combat in Hearts of Stone. The main story, and the potential rabbit-hole that is the Runewright, are powerful enough to carry themselves, so sticking in massive hoardes of human enemies here and there only serves to slow down the pace.

Speaking of that Runewright, if you were looking for something to send you off on a flurry of sidequests in order to obtain coin and better gear, you’ve certainly found it here. Now that players have the ability to enchant weapons and purchase powerful runes, it’s easy to see a certain type of player falling deep into everything the Runewright has to offer. From combining runes to cast spells on weapons to simply buying expensive items to implant in your gear, if you’re a fan of The Witcher 3‘s crafting system, you’re going to have a lot of grinding on your hands. Of course, obtaining better enchantments comes with a hefty price, as players will have to obtain large amounts of cash money in order to upgrade the Runewright’s tools, so if you needed an excuse to start polishing off some of that base game content, here it is. 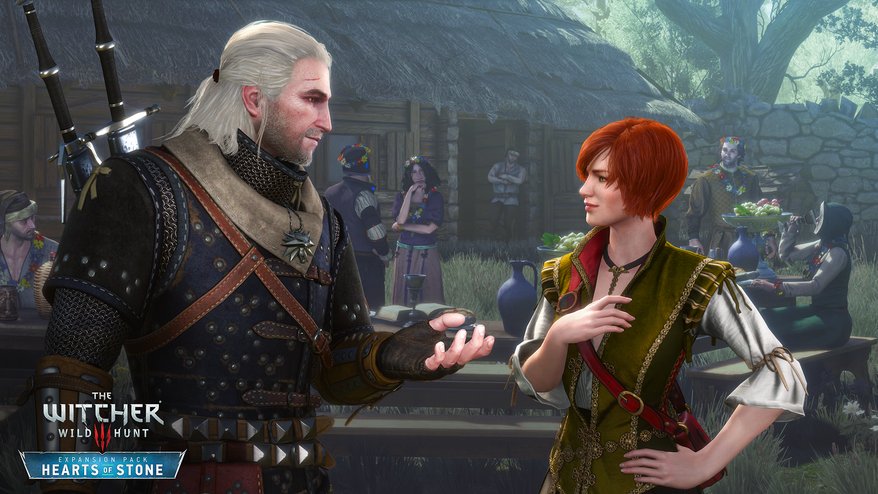 If you’re looking for an example of how to create meaningful downloadable content that doesn’t feel exploitative, you’d be hard pressed to find a better example than Hearts of Stone. From its love letters to longtime fans of the series to the outstanding character moments in its main quest, The Witcher 3‘s first piece of paid DLC adds yet another layer to what might be the most robust open world in gaming history. Sure, if you still have a ton of things to do in Wild Hunt (and frankly, why wouldn’t you?) then you can certainly justify passing on paying for more content, but if you’re someone who wants another robust storyline to dive into and some intriguing new mechanics, then Hearts of Stone is for you. Yes, this is more Wild Hunt, but seeing as how masterful it is, how could that be anything but a fantastic thing?