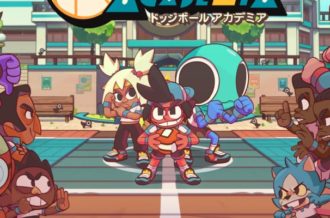 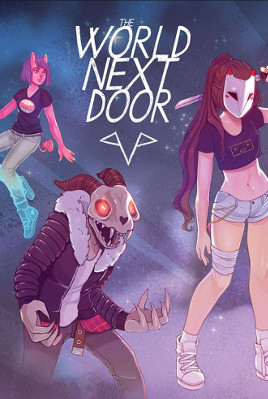 The World Next Door

It’s easy to get fed up with this world and fantasize about leaving to go to another world, at least if only temporarily. While the motivations for visiting another world are more cheerful in The World Next Door, the idea of taking a break from this world to check out an alternative is present. Earth and Emrys are two worlds that exist alongside each other, and every 25 years or so there is a lottery where the winners can travel to Emrys for a day. Protagonist Jun is one such lucky winner, which is fortunate since she’s now able to meet up with her online friend Liza, if only for a day. Prior to Jun’s departure, Liza and some friends want to teach her the secret of magic, which is something that is generally not shared with the people of Earth.

As with most game protagonists, Jun naturally takes to the gift of magic learns how to use various healing and combat spells but alas, something goes awry. Instead of being able to travel back to Earth with her new found magic and live as a god among mortals something happens preventing her from reaching her portal home. This is bad for a number of reasons, one of which being that humans can only really stay on Emrys for a finite amount of time and thus her race to finding an alternative pathway home begins.

The story of The World Next Door progresses through visual novel style cutscenes. Jun talks to Liza and other NPCs such as Horace, who is one of the more interesting looking characters since his fashion choices include wearing a demonic skull over his head. The NPCs are generally more interesting and have fleshed out personalities than Jun, and look human enough aside from some otherworldly physical features to remind us that we’re in fat on a different world. The dialog is conveyed through subtitles while the actual spoken audio is more akin to Simlish, yet despite sounding like nonsense does a good job at being expressive. During the conversations the character can choose how Jun answers to influence the reaction of her companions but these are simple dialog trees. 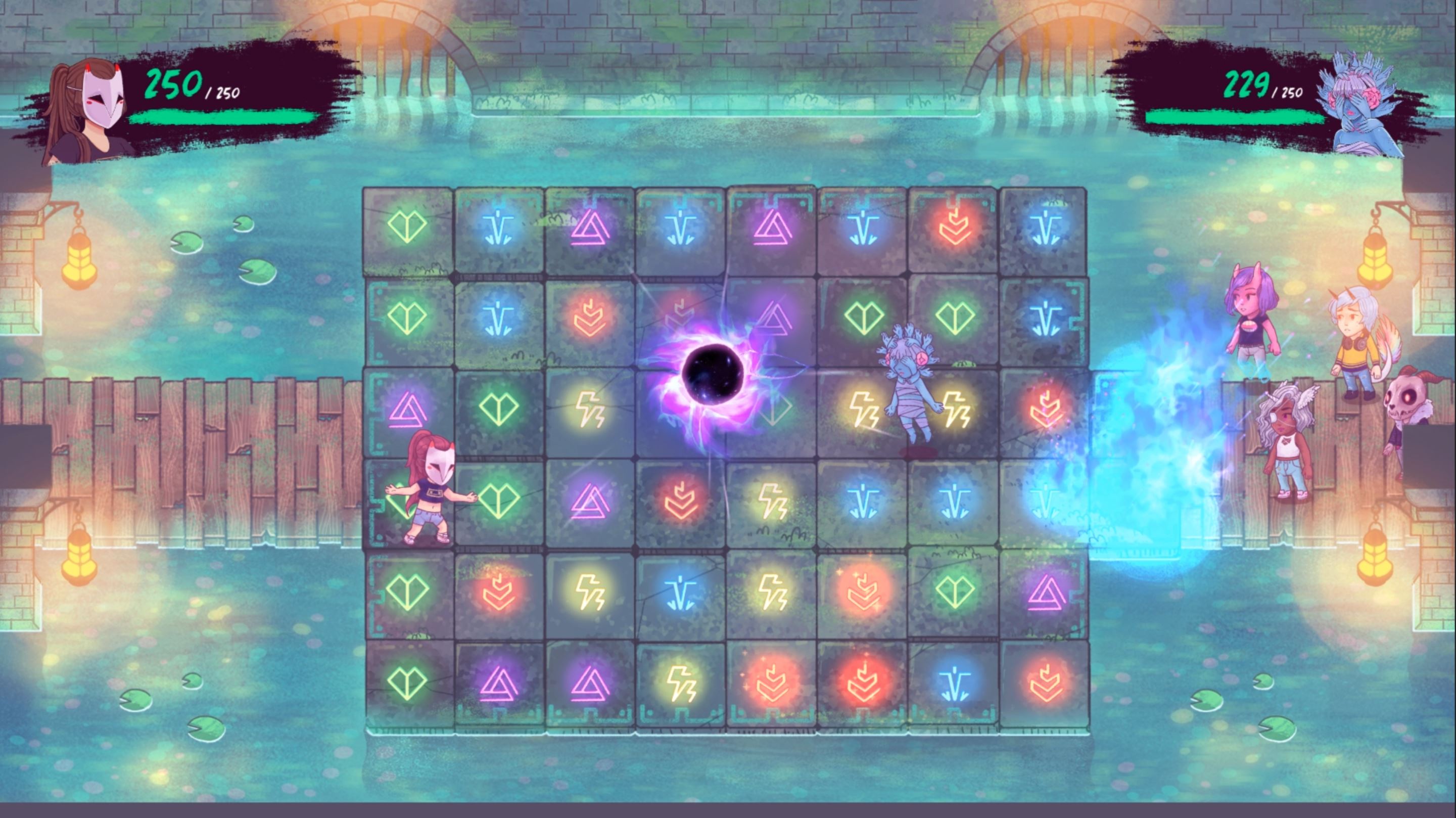 Outside of the visual novel elements, The World Next Door is an adventure puzzle game. Jun explores the inside of the shrine from an overheard perspective. The combat and puzzle systems are intertwined in a way that’s actually rather novel. When Jun is attacked by an enemy monster called a Grievance the room she’s in will turn into a grid of different covered runes. The player has to guide Jan to a grouping of three or more runes of the same color to cast a spell, red throws a fireball, yellow causes electrical damage and green heals, among other available spells. Part of the challenge comes from Jun having to move the right colored runes together in order to create the proper grouping to cast the desired spell. This can be challenging, especially when fighting against multiple enemies since a few weak enemies can be more dangerous than one powerful one.

The challenge of The World Next Door isn’t nearly impossible, but quick reflexes are required to stay alive since the enemies move quickly and deal a lot of damage. The challenge is generally more fun than frustrating; most players will not make it out of the shrine unscathed, but the quickness required to multitask arranging the runes to cast spells while dodging the enemy attacks does make for a scenario that engages a player’s fondness for action games while not being mindless. While this does provide a puzzle element, the strategy behind it is rather simple and success in battle is still determined by the speed of the player’s thumbs over the speed of their mind. For people who wish to simply enjoy the story and progress through the game without dying, there’s the option to turn the damage off. 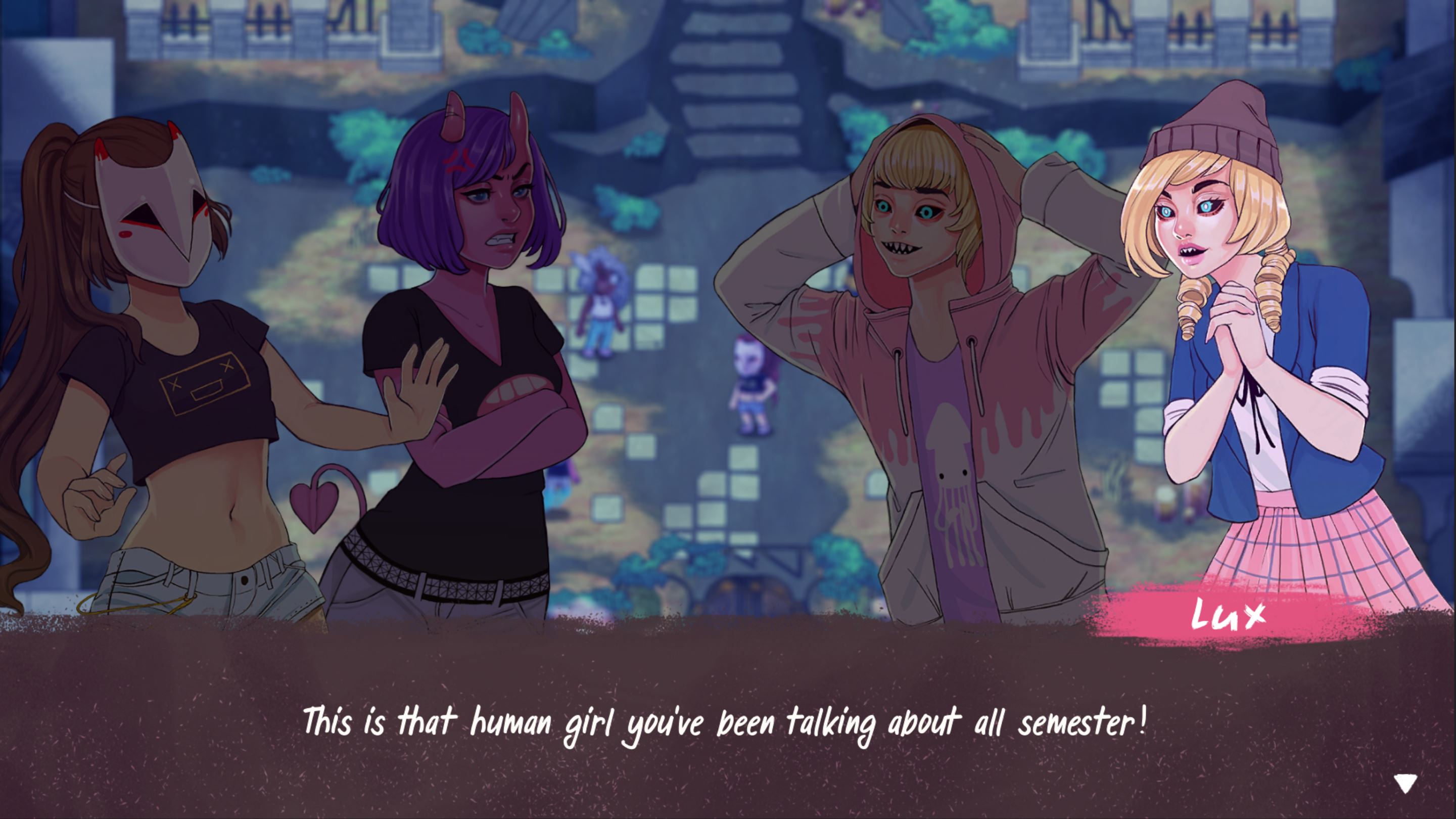 There are several good ideas in The World Next Door that come together in a way that create an enjoyable experience but one that ultimately falls short of its potential. The idea behind the story starts off interesting enough, but ultimately leads to an anti-climatic conclusion. The gameplay mechanics work well enough where the game is fun and the puzzle approach to combat helps give this title a unique identity but even with the puzzle elements the battle system isn’t incredibly deep.

The character designs and art style one of the stronger points in The World Next Door. Giving the residents of Emrys a basic human appearance with some alterations to set them apart isn’t the most unique idea in itself but the character art is beautifully drawn and the designs help bring out the personalities of each character. The environmental graphics can be a touch on the drab side but the visuals in the cutscenes and with creature and character design can offset that. 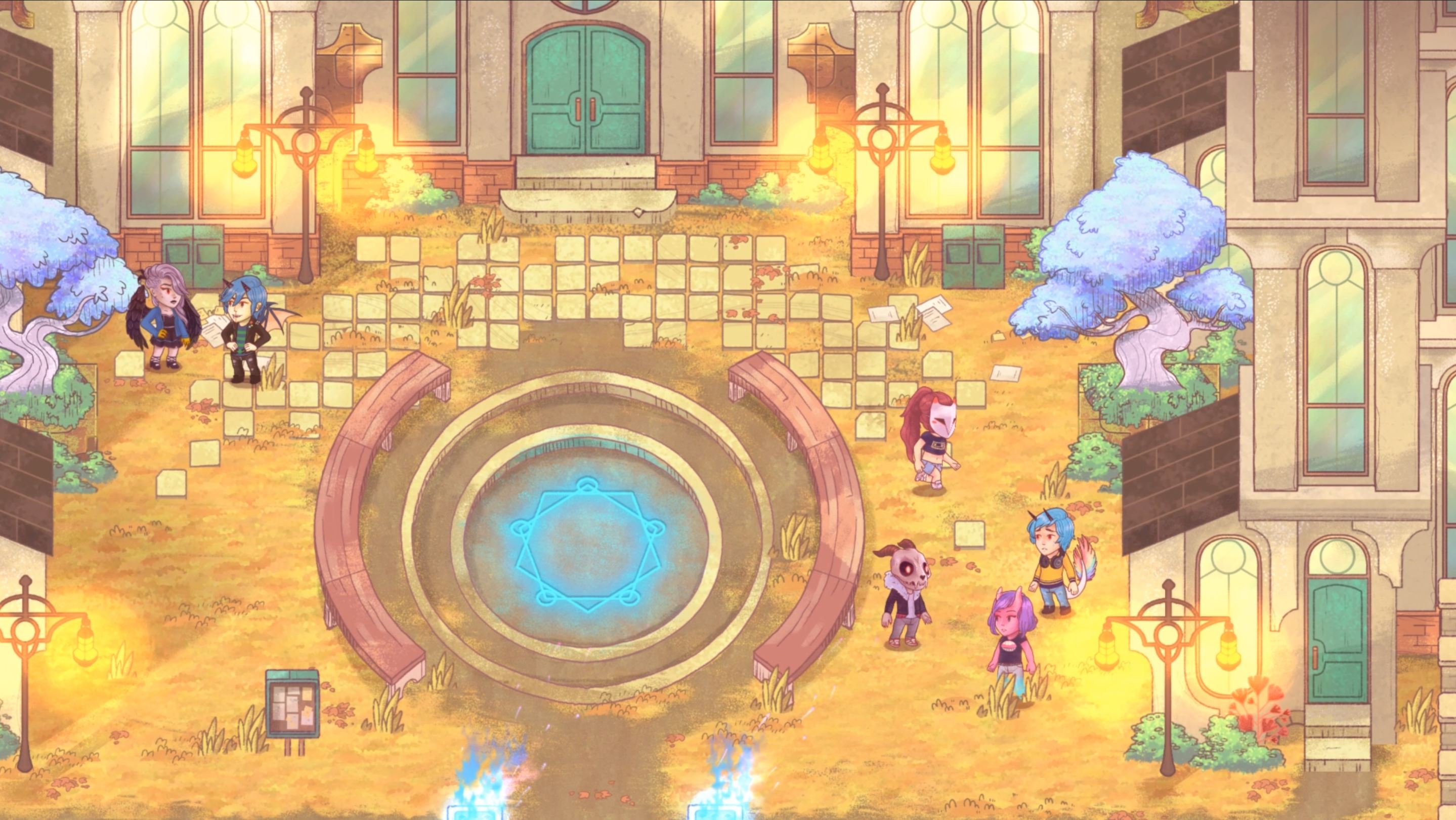 The World Next Door is not a title that’s going to rock anyone’s world, but it’s a good title that would be worth checking out for someone wanting something a little different. The puzzle combat system is enjoyable but could have benefited from further development to flesh it out a bit more. The story isn’t extraordinary but is still an enjoyable journey despite its anticlimatic ending. The game takes about four hours or so to complete, so it isn’t a huge time commitment. The world of Emrys is an interestingly designed world that can be fun to visit but is also not a bucket list destination.