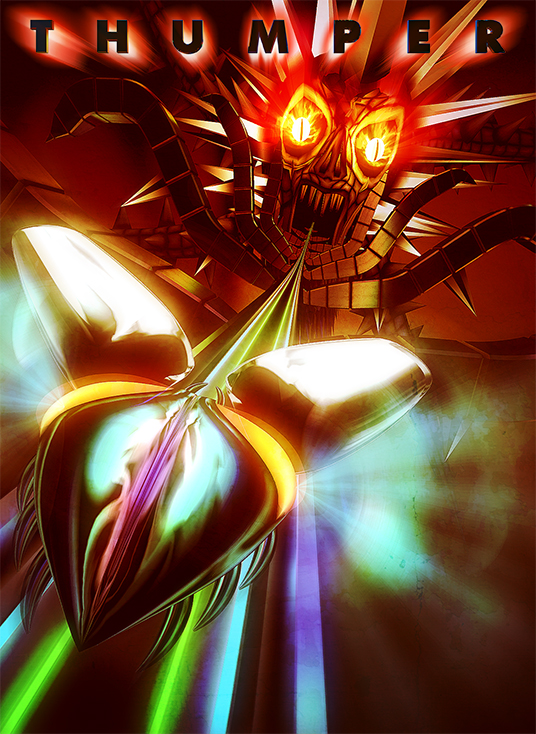 There’s a chrome beetle hurtling down an endless track and it’s not stopping for anything or anyone.  The music driving it forward is an ominous hammering of massive drums, and the rest of the instrumentation for the beat is provided by the sounds of the beetle tearing up the course as it blasts through barriers and corners on the way to an unknown destination.  The world of Thumper isn’t a friendly one, but once you’ve started there’s no turning back, no matter how the rhythm of the action tries to kick your skull in.  There’s a tempo to everything, and once you’ve found it, the controller turns from a gamepad into a musical instrument laying down an accompanying track to the heavy percussion pushing you onward.

The title screen of Thumper is a lovely, calm place.  The track extends in a straight line spooling forth at a stately pace from a pinpoint of light, lazy horns providing a peaceful overture as nothing much happens at all.  It’s pleasant and serene but there’s a dark, pounding heart waiting behind the title to subject you to its fury.  Each of Thumper‘s nine courses is faster and meaner than the last, and if it starts out nice to give you a moment to get up to speed with the controls that’s only a temporary concession.  The giant mad gaze of Crakhed is waiting at the end of each level and it’s not subtle about expressing its desire to see you dead.

At its heart, though, Thumper is a fairly straightforward arcade game that takes the note track from Guitar Hero/Rock Band and puts a bug on it.  The controls are simple, one button and the thumbstick, and success is dependent on hitting the button in time to the track’s inputs.  Hit a glowing square as you pass over it by tapping the A button, hold the A button down to bull through obstacles and around corners, press A and hold Up to get a temporary moment of flight when passing over the glowing square, and either let go of A to settle back to the track or pull down on the stick for a ground pound.  It seems so easy when broken down like that, until the course throws multiple obstacle types strung together one after the other at what feels like hundreds of miles per hour as you hold on for dear life with your metallic beetle legs. 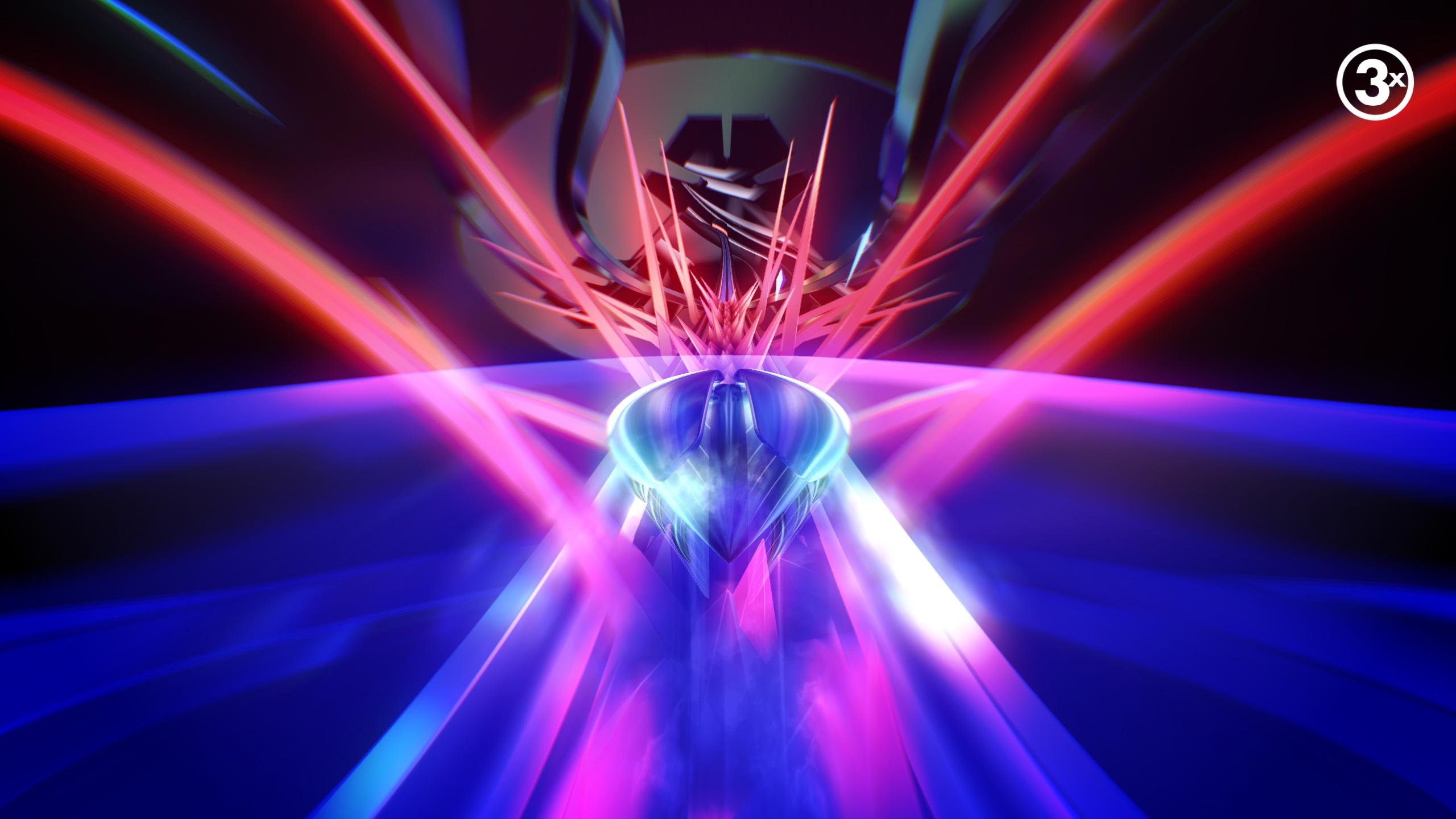 Hard as Thumper gets, though, the beetle has a saving grace in that it can take two hits before exploding into chrome shrapnel, instantly restarting the current section of the track.  Each of the nine levels is divided into (roughly) fifteen to thirty sections, some quick and others feeling like marathon sessions lasting almost a full minute before the next checkpoint is reached.  Making the run without missing a beat does nice things for the score but isn’t a reasonable expectation for us mortal types in the later areas, so taking a hit knocks off the beetle’s metallic carapace.  Hitting a blue tile glowing extra-bright restores it, but they’re only available between sections or if you earn one by hitting a long chain of beats and throwing a shockwave up the track by ground-pounding a blue tile.  Most sections aren’t long enough for it to be a major concern, seeing as death simply restarts the current part of the level from its beginning, but bosses are another thing entirely.

Each level has a mid-boss encounter as well as the return of Crakhed at the end, bigger and more tentacle-y than before. The boss fights are divided up into four sections, and while you don’t need to fight it perfectly it certainly helps.  The tiles in the boss fights are green but, if you fail to activate one when you slide over it, the rest of them turn blue, meaning the section will loop for you to try again.  The extra-bright tile at the end of a section sends a shockwave to the boss, and it finally goes down after the fourth hit.  One of the quirks of Thumper is that you only earn a health-up in the boss encounter after running a perfect section, meaning it doesn’t tend to be available when you need it most.  Unless, of course, you run the next section perfectly.  It may not be a likely feat but after the sixth or seventh attempt it’s at least possible. 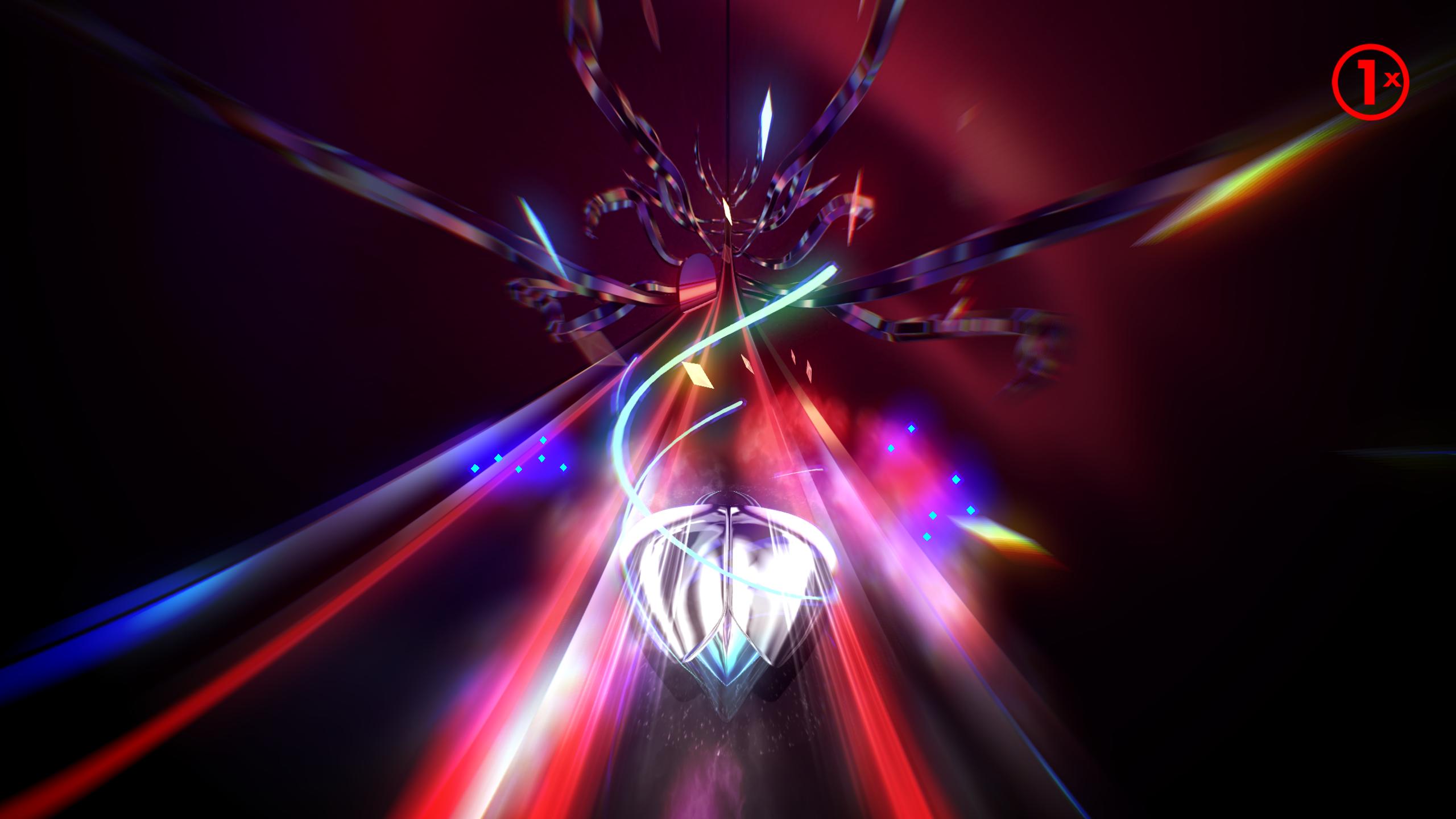 While Thumper is, unquestionably, very hard, it’s also a rhythm game and the key to success is understanding this.  The corners, tiles, and barriers don’t happen at random but rather are synched create an overlying beat to complement the background drums, and the sequence of actions come in pre-set patterns that don’t vary from one play-through to the next.  It may take a bit of experimenting to figure out how everything fits together, but once you’ve got the rhythm of the section you’ll see that each level is built from musical phrases that you’re playing on the controller.  Hold-A Left Hold-Right Toink Toink (shattering barriers) A-Up Tink Tink (air barriers) Slam Down Boom!  There are endless variations and each level is comprised of hundreds of beat patterns strung together.  Not all the time, of course, because a few interstitial bits do require playing by feel, but once you recognize a pattern you can almost play the familiar series of beats blindfolded.  Yes, Thumper is brutally hard the first time through, but it’s a game you can learn and become familiar with.  Nobody starts Elite Beat Agents on Cheerleader mode but once you’ve got the experience it’s hard to go back.

The PC and PS4 versions of Thumper came out last fall and now it’s available on Nintendo Switch.  There’s no difference between this version and the original, aside from a few quality-of-life updates such as Restart Previous being added to the menu for when you miss that very last beat on a track.  The only real difference is the ability to take Thumper on the go, whether that be playing in bed or on the bus, and while the game benefits from a large display, it’s perfectly playable on the Switch’s smaller screen as well.  The notes and turns aren’t quite so big and obvious, of course, but it’s the price one pays for convenience.  The game runs at full resolution when docked, 720p when in portable mode and 60fps at all times.  Thumper is the same dark and foreboding masterpiece that it was on the other consoles, and a fantastic addition to the Switch’s lineup. 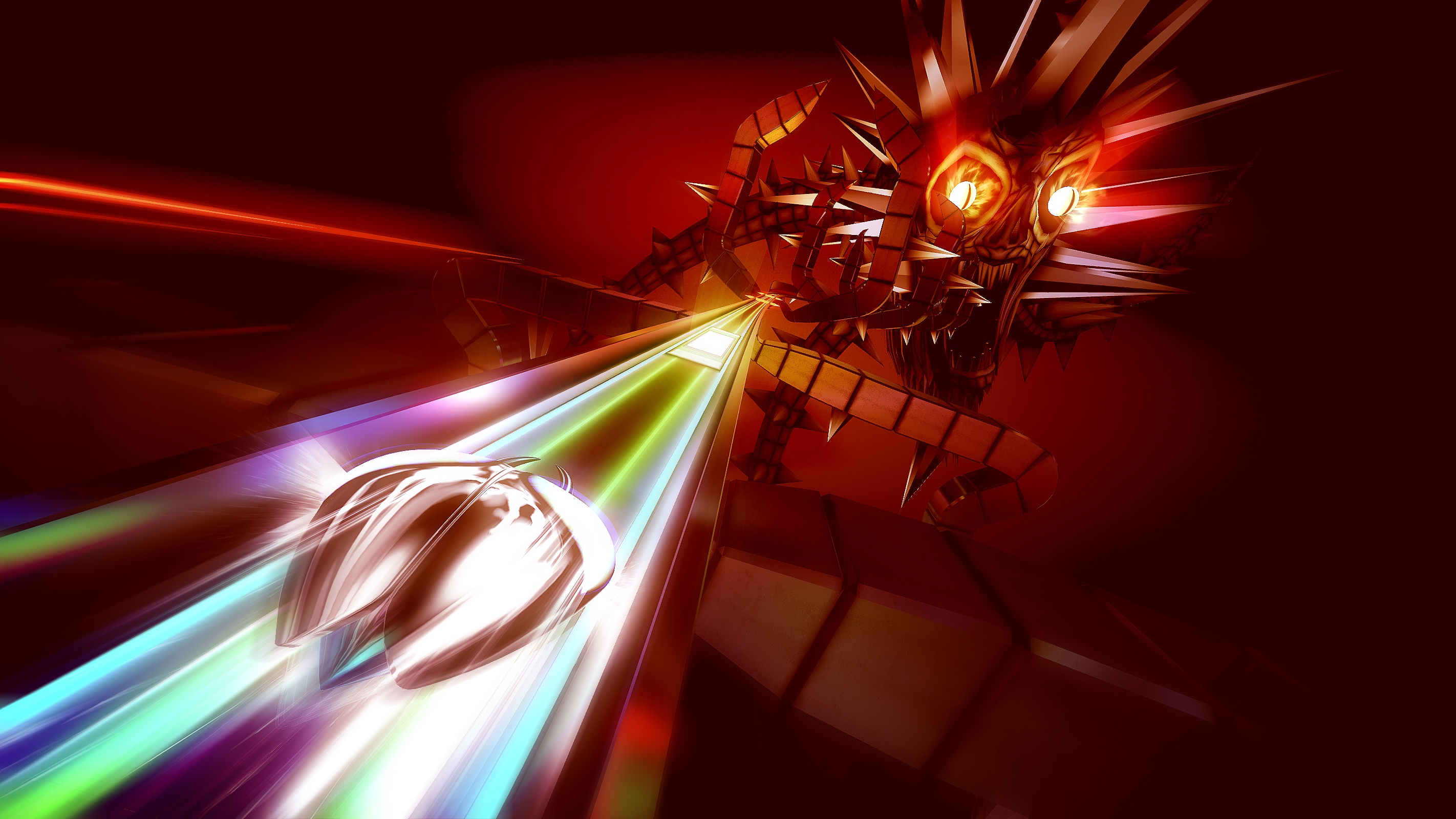 By the end of Thumper, the speed is insane, the music wild and oppressive, and the feeling of just barely holding on to a beast that wants to send you flying so it can gnaw your bones is disturbingly strong.  It’s a long ride from start to finish, especially for completionists looking to S-rank every section of track, but the feeling of learning this monster, never taming it but coming to grips with its behavior and meeting its challenges, is strong enough that even while the game beats you down it’s impossible to not want one more try.  Every death and new attempt makes the section sound better, as you make the beetle not only hit its notes, but work in a few flourishes along the way.  The Switch version easily holds its own against the PC/PS4 releases, and being able to take it wherever you go is perfect for a game that can be played in small, brutal chunks so long as you’ve got a good set of headphones.  Thumper is a beautifully dark, unforgiving and utterly fantastic rhythm game, and its sense of menace is only matched by its wonderful playability.