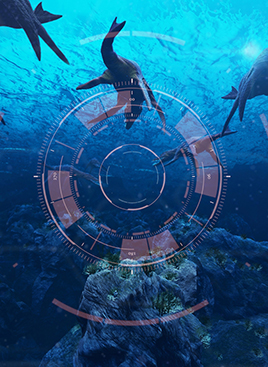 Very little is more game-breaking than a time machine and it’s one of the hardest flights of science-fiction fancy to write well.  Something about being able to bypass the rules of living life at one second per second in strict sequential order seems to disable a story’s narrative logic and only a few writers have the ability to twist cause and effect around each other in a way that doesn’t devolve into a paradoxical plot hole.  One way to avoid this is to have heavy restrictions on how close to the present one can time travel and in Time Machine VR that’s all the way back to the age of dinosaurs.  It’s hard to break the present when you’re twelve million years in the past.

There’s no justification required for visiting the past beyond “Oh cool, dinosaurs!” but Time Machine is a bit more urgent than a sightseeing tour. Thawing arctic ice has released a plague on the world and its origins are deep in Earth’s past. In order to create a cure you’ll need to step behind the eyeballs of a fresh new cadet piloting a mini-submarine fitted with the latest in time travel and scanning technologies. There’s a major disconnect between story and gameplay, with the two seeming to run almost independently of each other, but the game is roughly 5% story and 95% chasing after dinosaurs so it doesn’t end up being that large a distraction.

The bulk of the game is divided up between four areas, plus a fifth hub world containing home base and a terminal where you can examine the dinosaurs and information you’ve discovered. Once in the past the scanning tools are introduced one by one, with seven different options to choose from. The first item is important enough to get its own button, and it’s a little ball that flies a short way before sending out a red pulse that tags anything of interest in its expansive radius of effect, including any exits from the level. The other six tools are accessed by bringing up a radial menu and looking at the one you want to choose, and it’s still early enough in the days of VR that I can appreciate how quick and effective it is rather than taking it for granted. 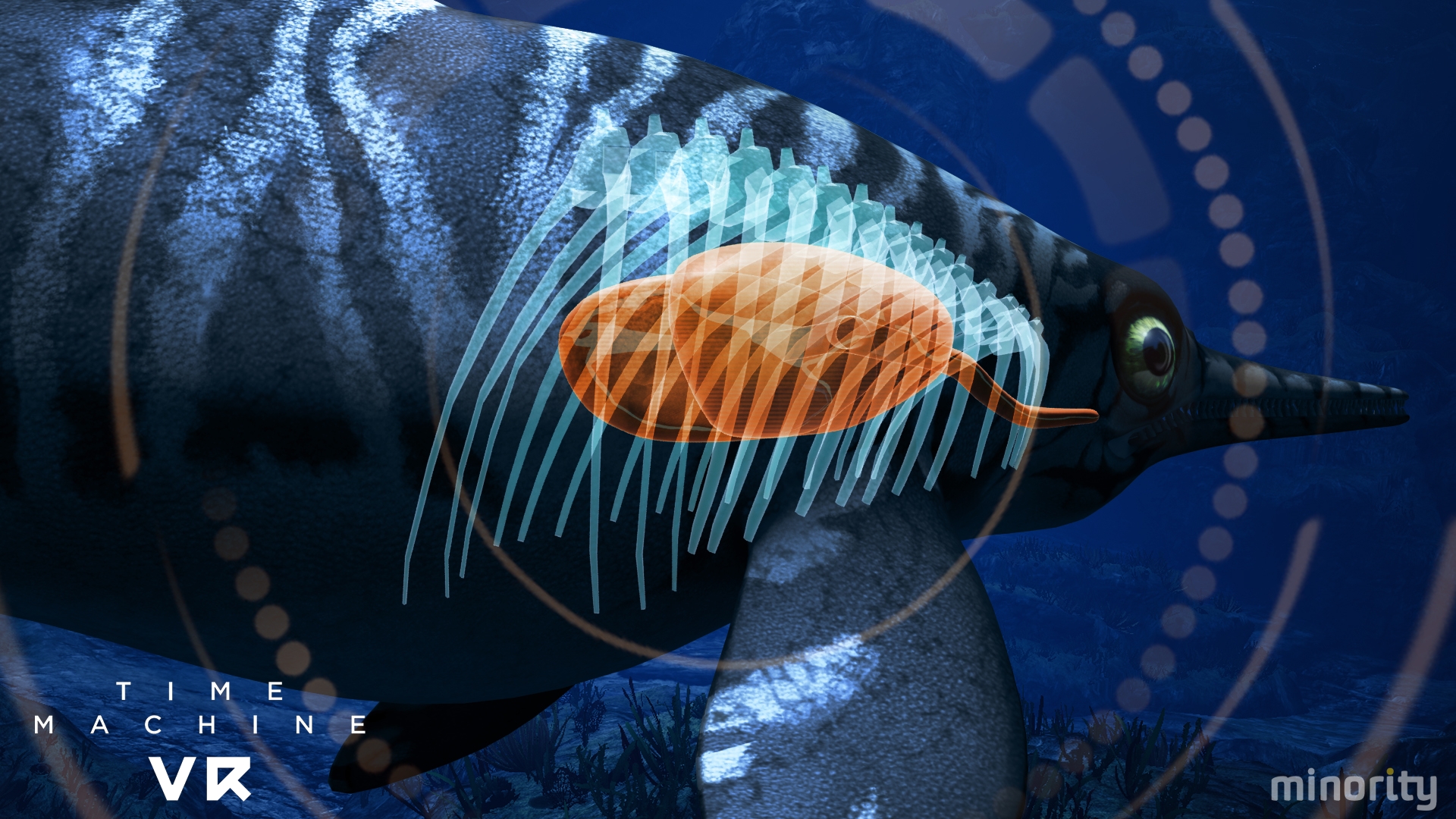 Of the six tools, most do roughly the same thing- scan dinosaurs for information. One scans surface features, another internal organs, a third paints an area of dino-skin to get a more detailed reading, while the fourth takes a 3D image of an area for a behavioral snapshot. The final two tools tag a dino as a point of interest, and the other makes whatever it attaches to bait for bigger, hungrier creatures. Levels generally follow the structure of figuring out which tool to use next, and when at a dead end you can either tag a dino to highlight the next body part to examine or break out the internal scanner to see if you missed anything inside. Your chatty AI helper usually clues you in to whatever you need to do next, but not always.

If that sounds like Time Machine VR is a game of looking at things, that’s perfectly fine. For the most part it is about observation and data collection, but the things being looked at are gigantic dinosaurs swimming through prehistoric seas. Massive sharks and carnivorous whales, long-necked herbivores, spiral-shelled Cthulhian nightmares, weird things that look like proto-hippos with butt cracks, and even mammoth penguins all need to be scanned and their data uploaded as they swim and hunt in their oceanic habitat. (The info-console is closed off at the end of the game, making it hard to look up the real names.) Most dinosaurs ignore you but a few see you as a tasty snack, which is not only dangerous but also interferes with data collection. 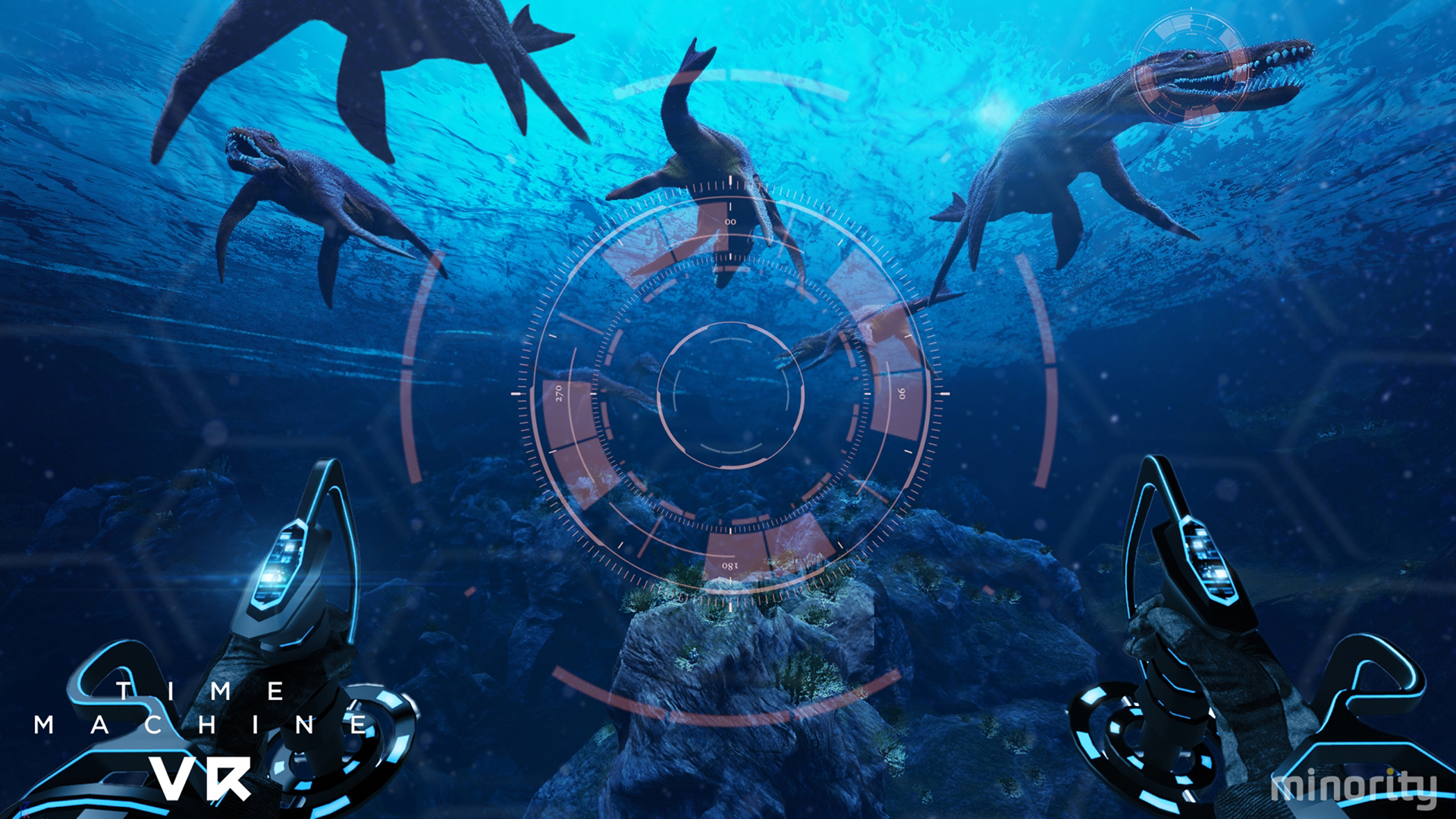 This is where the sub’s final abilities come into play. In addition to time travel you can also stop time almost dead in its tracks, leaving the dinosaurs moving imperceptibly slowly while you get close enough for your scanners’ limited range to pick up data. When a dino’s toothy head is as big as the entire sub it’s a bit unnerving to get within the necessary meter or two to scan its teeth, but that reading isn’t going to collect itself. The trick, of course, isn’t so much getting close as it is escaping, and you’ve only got a limited amount of time-freeze to play with. It doesn’t take a lot of experience to learn that predators are quicker at horizontal than vertical movement, though, so a quick dive usually takes care of the problem. If it doesn’t, though, the time machine has a temporal emergency override that sets it back at the start of the area.

While this removes the threat, it doesn’t take away the sensation of a giant toothy mouth coming straight for your face ready to tear your fragile glass and steel machine to splinters. The effect of VR at bringing these behemoths and their worlds to life is fantastic, giving a sense of scale to the underwater environments and the giants that swim through them, but it does come with its share of literal headaches too. 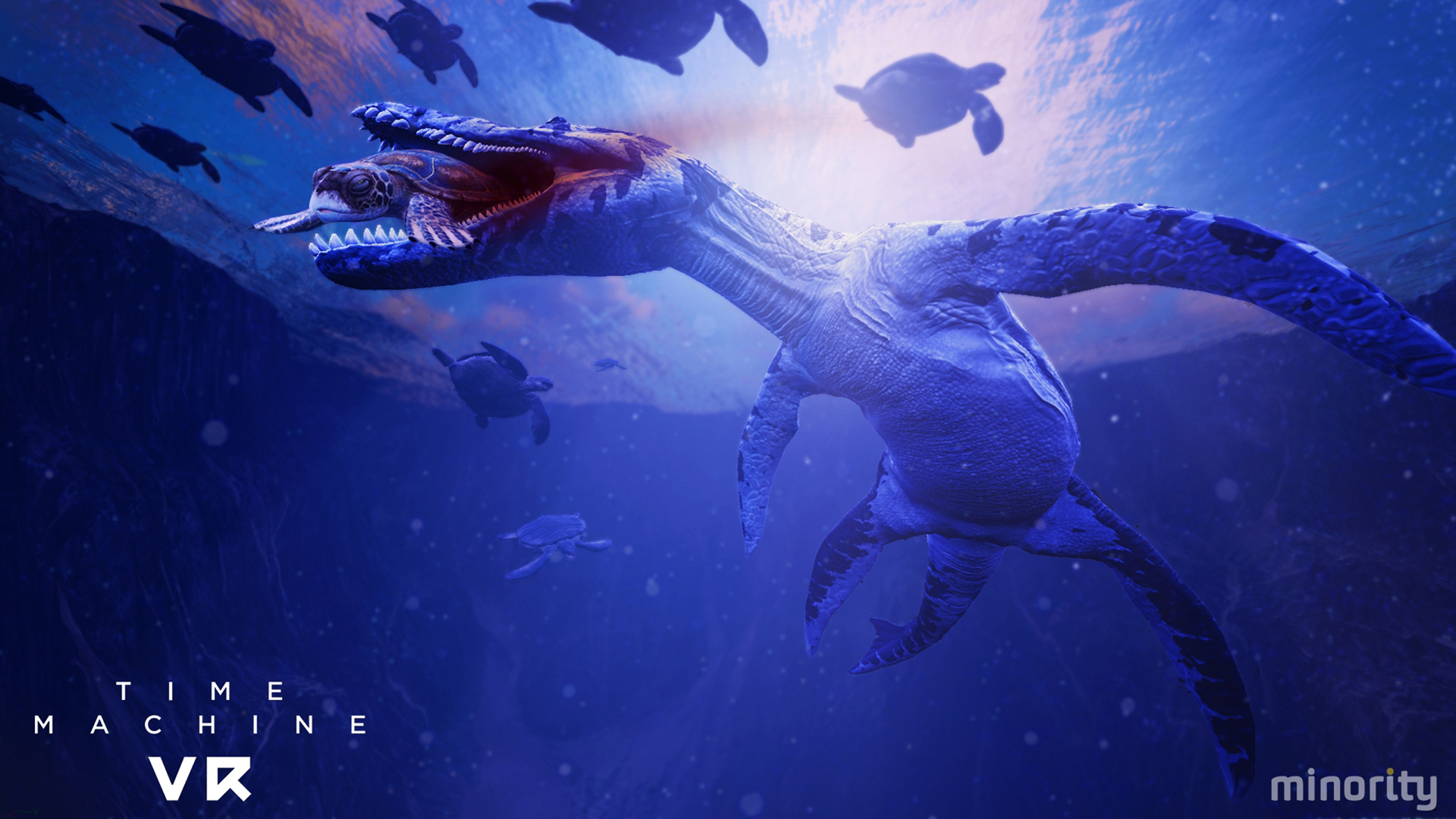 While I never got any VR nausea, the game did leave me with the feeling that my eyes were about three sizes too big for their sockets after an hour’s play, and I never quite figured out which aspect of the game caused this. The movement was slow enough that the dizziness from turning while my body sits still only rarely kicked in, and the view is always upright, no pitch or roll to worry about. The murk of the ocean seems the likely culprit, seeing as it causes a draw distance that could (maybe?) result in mild eyestrain when reflexively trying to look farther. The simple solution was to play for less than an hour and take a few minutes break, but the result of a game that causes physical unpleasantness was that it took me a couple weeks to get through what would normally have been three days playing at a leisurely pace.

The other, less VR-related problem with Time Machine is that it’s in desperate need of bug squashing. Weird animal behaviors are one thing, but the time a giant carnivore’s head turned inside out before twisting through its body was freaky-weird. The predator was trying to track me in an area not big enough to move freely and couldn’t get past a rock outcropping, so instead circling around it turned into an inverted polygon nightmare. Why it felt the need to pay attention to the physicality of the rocks instead of swimming through like they just weren’t there was a bit of a mystery, because that’s what all the other dinosaurs do. It was also fun realizing that a proto-hippo I was tracking was no longer swimming at the surface of the water but flying above it. 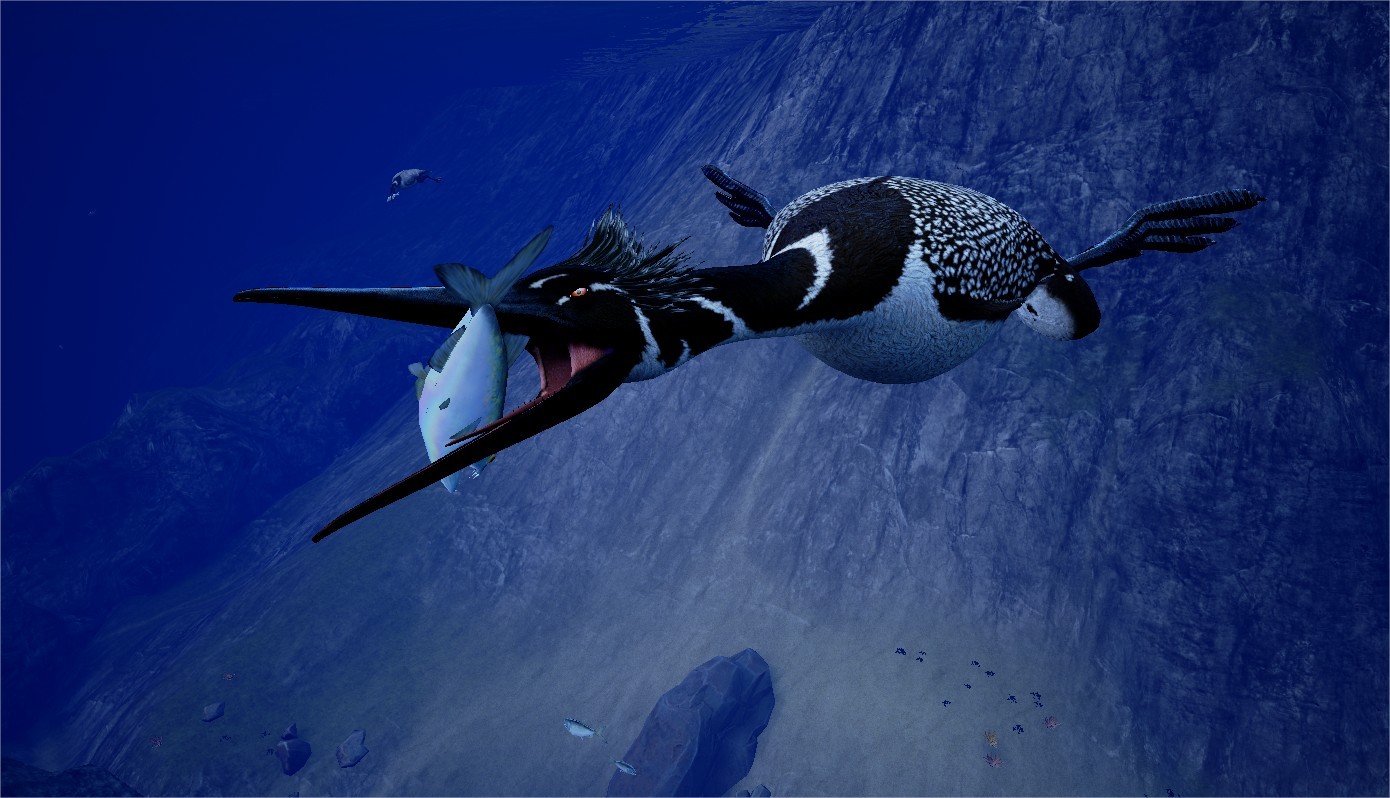 Time Machine VR is the kind of game you tend to see at the start of a new technology. It shows off what VR can do and does it in an impressive way, but the game itself is only fairly decent. Getting close to these giant beasts in their own habitat is a fantastic experience, but I can’t help but wish there was more to do than look at them and follow the instructions of an AI companion. There’s a little hide and seek involved in finding hidden areas, but this devolves into dropping a probe in and looking for the red marker, which is the only way to find them. There’s some nicely bizarre rewards for finding these exits, but it’s still more “look at this neat thing” rather than any real interaction. On the plus side, “this neat thing” is a really impressive thing to look at, especially as it swims by and leaves you feeling like it wouldn’t even notice if it crushed you like a bug. There’s a real sense of wonder in observing the dinosaurs of Time Machine VR, but it needs a round of bug quashing and a better role for the player to rise above the crush of titles in the VR launch window.