With both new consoles out and the next-gen release schedule being pretty much empty for the rest of the year (at least in terms of retail releases), owners of these new machines are hungry for any new games to pick up. This week saw the first post launch releases on the Playstation Store, which includes Tiny Brains from Spearhead Games.

Tiny Brains puts you in the role of four lab animals that have been experimented on by a mad scientist. Each of these animals has a unique power, which is used to solve puzzles and make your way through the hazards and obstacles littering the laboratory you find yourself in. The game definitely has a bit of a Portal vibe, with its array of discreet puzzle rooms accompanied by voice over from the mad scientist. However, he is no GlaDOS. The overall tone is light and fun, but instances of laugh-out-loud humor are mostly nonexistent. 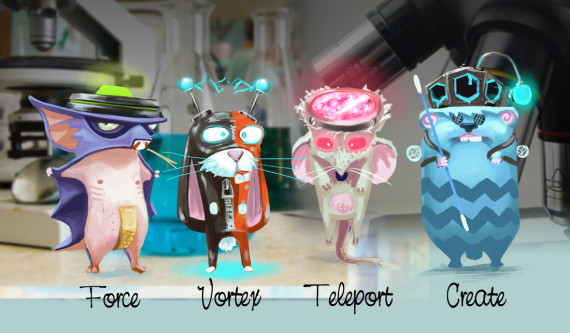 The mark of a good puzzle game is hitting that sweet spot where the puzzles are challenging enough to feel rewarding when you solve them but not so difficult as to become overly frustrating. In that respect, Tiny Brains misses the mark in both areas. The puzzles themselves feel too easy to solve, but the execution of the solutions becomes frustrating for all the wrong reasons. The puzzles aren’t terrible, there are some that task you with using your powers in some cool ways, but they never really make you think too much. You can play the game alone or with anywhere from 2 to 4 players, but no matter which configuration you go with there are problems that hold the game back from its true potential.

No matter how many players you have, all four of the characters are essential to progressing through the game, so if you’re alone you’ll be switching between characters on the fly. You can switch directly to a specific character with their corresponding direction on the d-pad or cycle through the characters with the shoulder buttons, though neither of these options is ideal. The solutions to most of the puzzles are pretty obvious once you have a grasp on the various powers, but executing feels needless cumbersome.

Most of the puzzles demand that you combine powers in order to solve them, which necessitates switching between characters when playing solo. You’d think it’d be as simple of using the d-pad to switch directly to the character you need, but when switching in the heat of the moment, taking your thumb off the left stick can often result in death or failure to execute your move. It’s easier to use the shoulder buttons to switch in tight situations, but you have to cycle through the characters rather than go directly to the one you need. The most frustrating thing is that you unlock a fifth character that has easy access to all the powers at once without the need for switching, which would be perfect for playing solo, but you don’t get the character until after you finish the game, and even then it is limited to a time attack mode that ends after only a single death.

When playing with any number of players other than four, the issues regarding character switching become even more of a problem. Because you need access to all the characters to progress, you still need to be able to switch between characters on the fly with any less than four players. However, there can only be one version of each character in the game at a time, so you can’t switch to characters that are being controlled by other players. After a short time playing, you’ll get used to the order in which the characters cycle when switching between them, which makes it all the more disorienting when it skips over a character because they are being controller by another player. You’d think it would be as simple as communicating, but in dire scenarios everyone’s first instinct is to quickly switch characters and try to save the deteriorating situation, which just results in everyone getting switched to a character other than the one they were trying to select. With four players these issues disappear, but the lack of difficulty is really highlighted here because the main challenge of the game unfortunately resides in the convoluted on-the-fly character management.

The main story is about a 2 hour journey, and in addition to the puzzle rooms, there are also some combat encounters and ball rolling challenges. The combat encounters are inoffensive, though not spectacular. The powers are clearly designed around puzzle solving, so they don’t translate all that well into a combat environment. Luckily, the combat encounters are pretty rare and don’t really hurt the game. The ball rolling sequences however, are the absolute worst parts of the game. You are basically tasked with guiding a ball through an obstacle course using your array of powers, but the courses are designed in an incredibly frustrating way and the presence of a cooldown on your powers means you’ll often be left to helplessly watch the ball fall over a ledge while you wait for your power to recharge. The one redeeming element of the ball challenges is that the best music in the game plays during some of them, but that only softens the frustration slightly.

In addition to the main story, there is a time attack mode which unlocks after you finish the game, but the puzzles are all unchanged and you only get one life, so it’s not a big draw. There are also an array of challenge stages. The puzzles here actually seem a bit more difficult, which is a welcome change, but puzzles only a make up a portion of these stages, with the others unfortunately being ball rolling and combat challenges. Another disappointment is that in order to unlock these challenge levels, you need to find collectables in the main game. You’ll get a good number of them during your initial playthrough, but in order to get them all you’re going to have to go collectable hunting. When the game is already on the short side, it’s a shame you’re forced to replay areas in order to see all the unique content the game has to offer.

The presentation of Tiny Brains has its endearing qualities, but is marred by some serious technical deficiencies. The graphics are colorful, the music is fine, and environment design is goofy and creative, but the game performs alarmingly bad. The frame rate is consistently lower than you’d hope, and frequently dips into the range of being unpleasant. The in-engine cutscenes are where the game is at its worst, we’re talking naked eye frame counting territory. The game has a decent style, but isn’t a technical powerhouse from a visual standpoint, so this type of performance, on a next generation system no less, is frankly unacceptable. 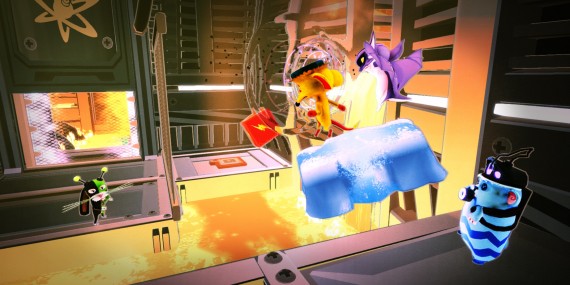 All the elements of a fun and creative co-op puzzler are present in Tiny Brains, but there are nagging issues or slight missteps that keep the game from reaching its potential at every turn. The powers are creative and fun to use, but the puzzles are far too easy. The only sense of challenge provided are frustrating instances of having to fight against the controls and design decisions. With a group of four like-minded individuals looking for a laid back experience, there may be some fun to be had, but the game doesn’t have much to offer beyond that. With some more interesting puzzles and cleaned up controls, Tiny Brains would be an easy game to recommend to everyone, but as it stands it’s best avoided.