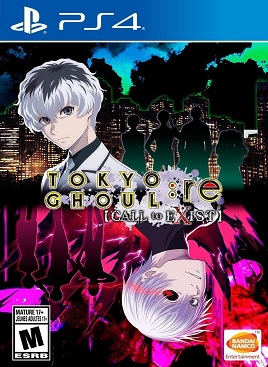 Tokyo Ghoul: re Call to Exist

For the youngins’ out there, it should be explained that not too long ago, a sub-genre of video games was the quickie tie-in. Roaming the landscape like feral, underfed puppies, the primary purpose was to trick kids, well-meaning parents and uninformed fans of a property to plunk down hard cash for a cheap, poorly-developed product. It’s easy to find stuff about these dark times. The Angry Video Game Nerd makes quite a living talking about these, for example. Up until the last generation, it was more of an event when a game based on a popular movie or show was actually good. Recently, these titles have been relegated to the mobile market, with the console and PC editions usually having something to offer, at least to fans of the property in question. Bandai Namco’s contribution to the anime tie ins have ranged from respectable to freaking awesome. One Piece: World Seeker wasn’t perfect, but fans of the show had plenty to enjoy. Dragon Ball FighterZ had plenty to offer, even to people that don’t know what a Vegeta is. So it’s with great disappointment to find that their newest anime tie-in title, Tokyo Ghoul:re Call to Exist takes a nostalgic trip back to the bad old days of yore.

As a series, Tokyo Ghoul centers around a human-like subspecies, known as ghouls, and their propensity for eating humans. So it’s kind of a drag for folks with a conscious, such as the protagonist Kaneki. He was a human, was almost killed and found himself the recipient of multiple organs from a ghoul that met her demise in the same catastrophe (try not to think about the organ donor status of the ghoul in question and the ridiculousness of the idea that they decided to use a random nearby body for spare parts. She was going to eat the hero, anyways). On the other end of the show’s conflict are the humans that would prefer not to be eaten, if it isn’t too much trouble. The anti-ghoul task force, the CCG, are out to eradicate the scourge in order to protect the safety of the general populace. The whole thing has a dark, bug-eyed insanity that mixes well with a ’90s era goth pathos to create a sublime block of anime nonsense.

The game itself is divided into two main parts. Recollection takes the player through a recounting of big moments in the show. Alternating between ghoul characters, doves (as CCG agents are colloquially known), and hybrids between the humans and monsters, players are tasked with battling through long stages filled with plenty of fodder enemies and mini-bosses to reach a climatic boss battle. The action itself is basic. There’s a quick standard attack, one special attack that is unique to whichever weapon the character is using, and either a shield or shield breaker move. Using these, along with a super move, the player is able to string together rudimentary combos and solve some switch flipping puzzles until the boss is beaten or the game decides the level is over. At no point does attacking ever feel fluid or engaging, though some quinques (weapons) that the humans use at least have a feeling of weight. 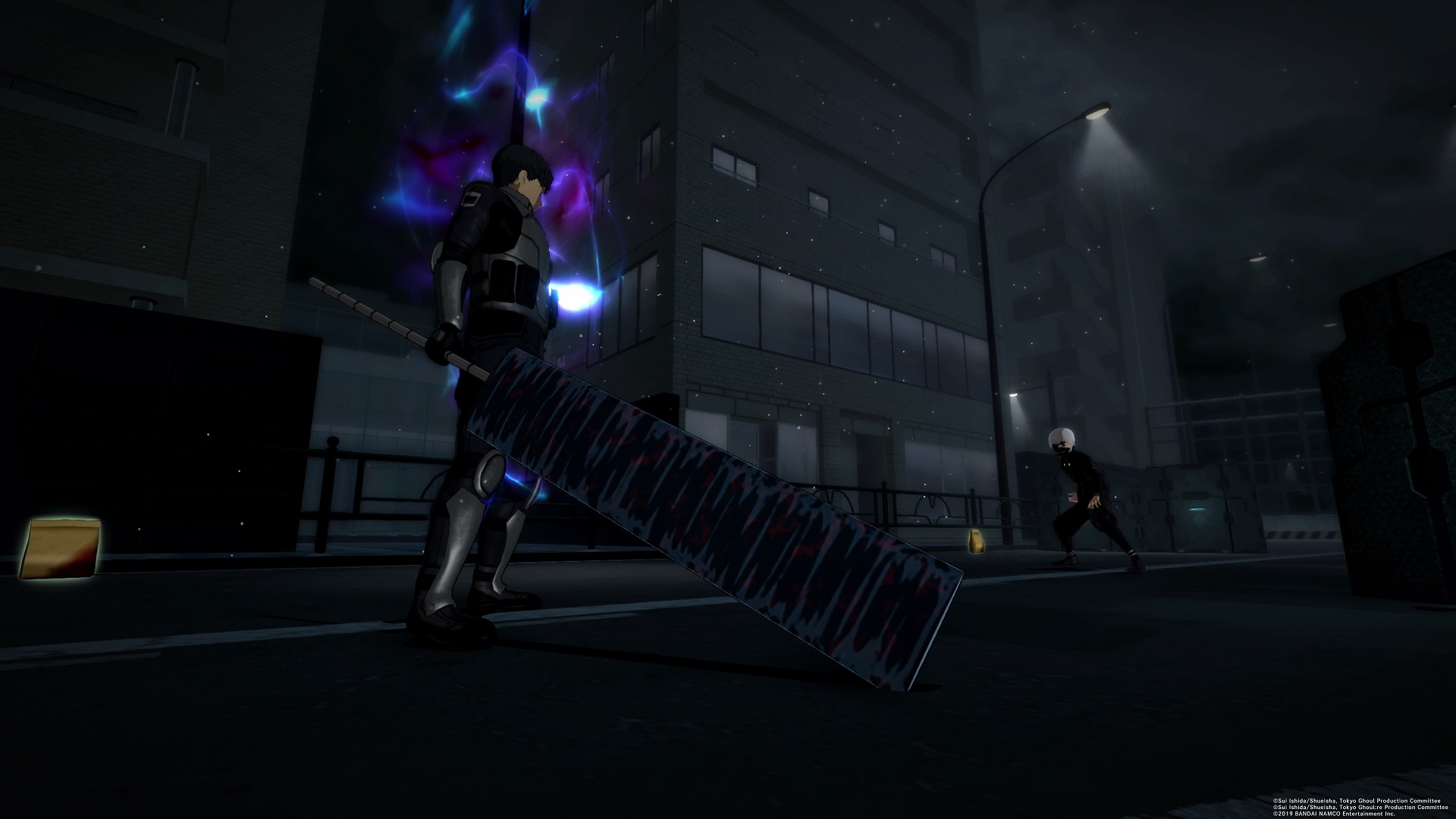 In addition to the lackluster combat, there are additional frustrations. The camera likes to ignore the masked freak currently punching holes into the player’s back in favor of what every might be going on behind a wall in the next room. This can be helped with a lock on camera, but the lock likes to drop out, and the player character begins to move at a crawl, with only the ability to dodge to close the gap or get out of the way. When the dodge is attached to a stamina meter, and the boss that’s being faced likes to spam attacks, it isn’t long before the player is the victim of unfair hits. Even worse, it’s easy to end up in a stun-locked state in many of the boss fights.

Then there are times when a required boss decides to just be a tease. At one point, a mini-boss was supposed to spawn out of a room attached to the main corridor that served as the play area. She could be seen and she could see us. She was afflicted with a severe case of shyness, however, as she chose to dance around the spawning room, knowing that an invisible barrier prevented the player to go in after her. Backing off to give her space to exit didn’t work. Using the protagonist as bait at the door or a few feet away didn’t work. Even moving the character and throwing attacks to the sumptuous beat of Wreckx-N-Effect’s seminal classic Rumpshaker couldn’t entice her. After around ten minutes of waiting and attempting to coax her out, I was about to give up. Finger less than a second away from hitting the home button, she jumped out and I was able to get a few swings in. She decided that this wasn’t exactly how she wanted to spend her evening, so she went back to her room. Because of the fallacy of sunken cost, this couldn’t just be left, and I was able to get her to re-emerge after about five minutes, and the anime groundhog was defeated. This means that we’re going to get an early winter. 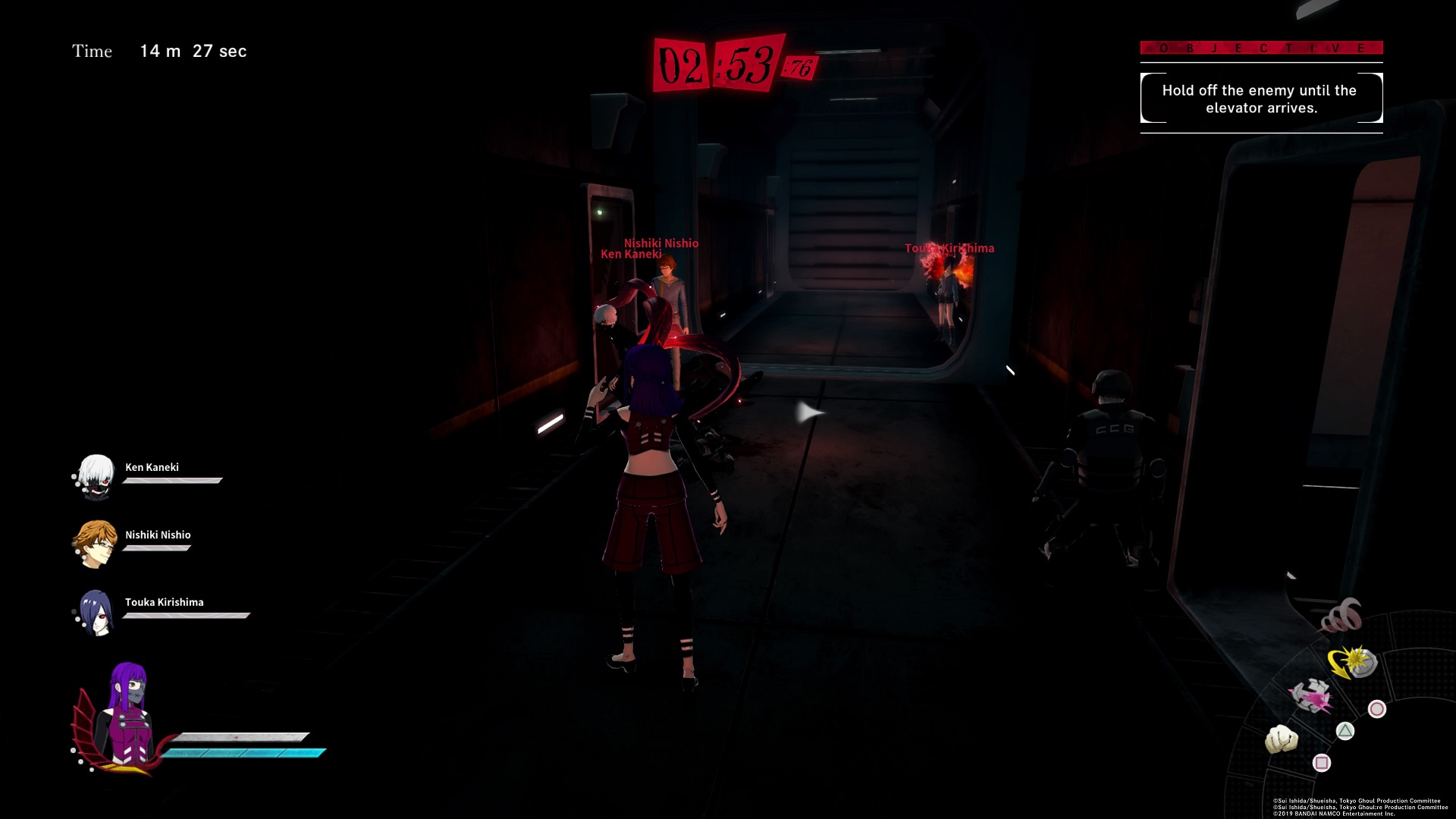 This isn’t to say that the game is difficult. Somebody who lost a bet and was forced to play this game to completion can do so without too much of a headache. The primary challenge is maintaining the willpower to do so. Traipsing through the drab, grey environments, fighting the same handful of enemy types in service of just getting to the next stage brings back memories of the aforementioned tie in games. There is just no heart, no soul to the experience.

The second main part of the game is Subsistence. Here the player goes through the same levels that were seen in Recollection, except now it can be done online with some different enemy placement. Obviously, this doesn’t elevate the experience. To the game’s credit, this can be done with a customized character. The options available are minimal at the start, however, with a paltry assortment added in through unlocks. Considering what a chore it is to get through the stages the first time, it’s unlikely that the servers will be filled with people looking to prolong the misery, so don’t expect Subsistence to add much company to the misery.

As far as the positive things to say, there are two hundred Accomplishments to earn, which is the system behind unlocks. Some are as basic as “Play this stage, use this weapon and look at this character’s bio” in order to get the goody. In a better game, this underlying system would have been enough to drain the hours from the day. Plus, some of the music sounds good on a nice set of headphones. End of list, unfortunately. 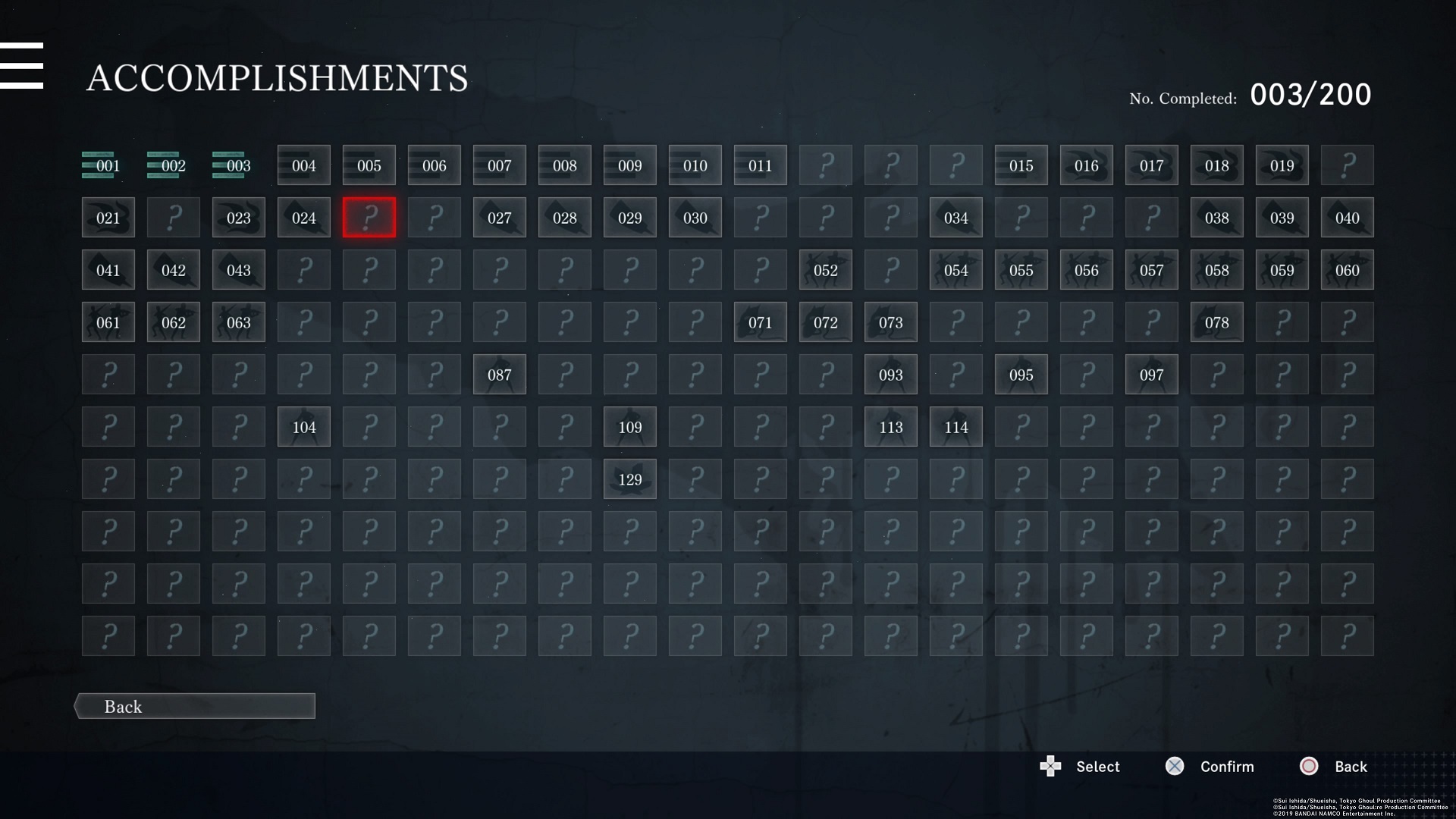 It doesn’t feel fair to lay all of the complaints at the feet of developer Three Rings Inc. This has the look and feel of a rushed project that was also underfunded. It feels as though the studio head went in with a rough alpha intended to give a general framework of the plan for the final product, only to be told to finish it up and ship it. It seems like the game designers never got a chance to flesh out the combat systems, the artists weren’t able to create the detailed visions that got them into the business, and the level designers only had a chance to shoot for functional, and kind of in line with the scene being recounted from the show.

One last comment: for those lacking the time to watch the show and were hoping that this game would serve as a quick crash course, it isn’t. It begins by covering Kaneki’s origins and then proceeds to barrel through other moments using screen captures from the show and dialogue that make zero sense to people who have not watched the original and the accompanying series, Tokyo Ghoul:RE. The show is good, though. Try to make the time if there is interest. 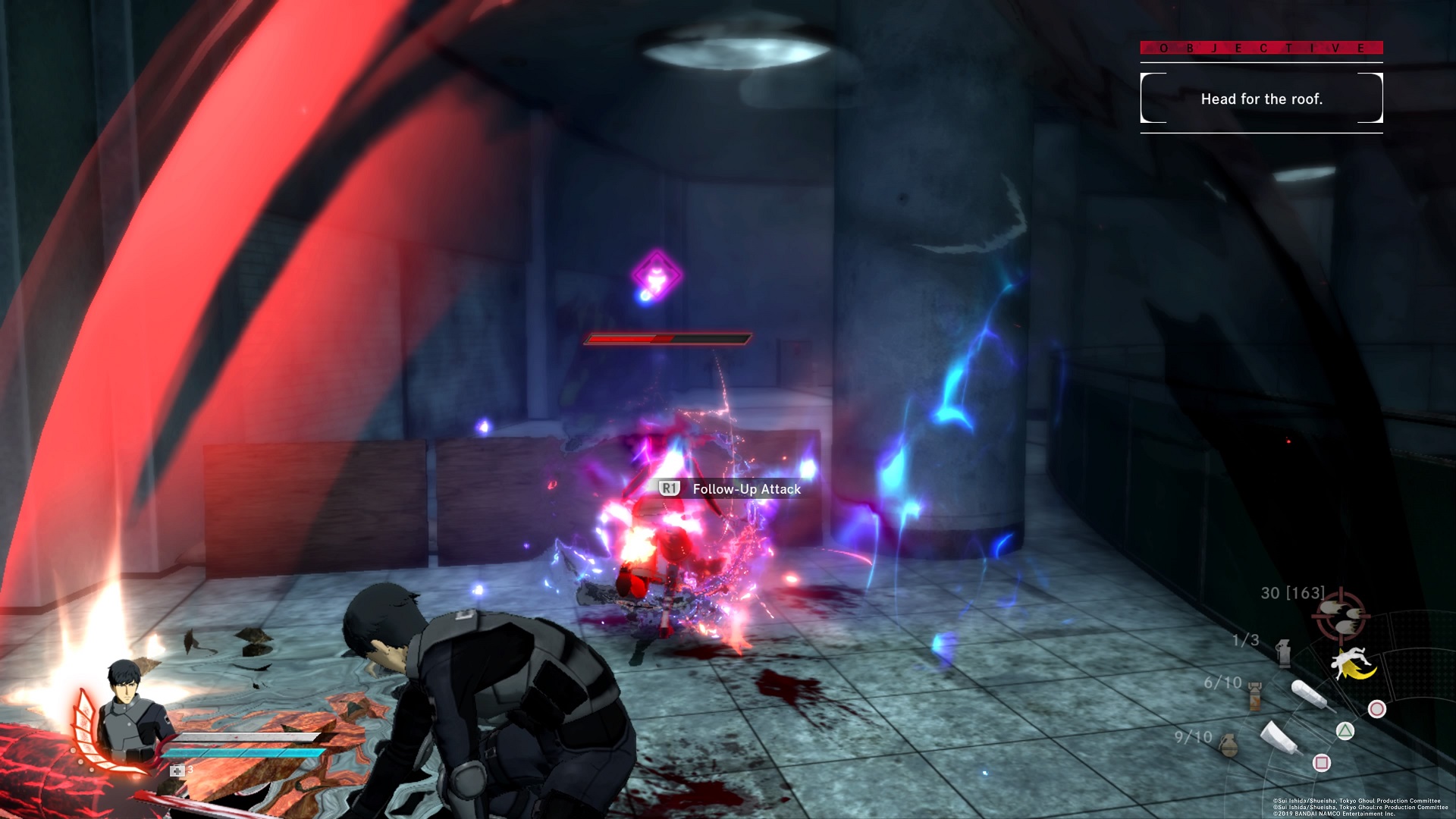 To say that Tokyo Ghoul: re Call to Exist is a letdown is an understatement. This is a title poised to irritate fans, befuddle neophytes and generally just waste the time for everyone involved. This is a true throwback to ye olde days of bad cash ins. As one ages, nostalgia becomes a comfortable past time. Not in this case, though. Not in this case.