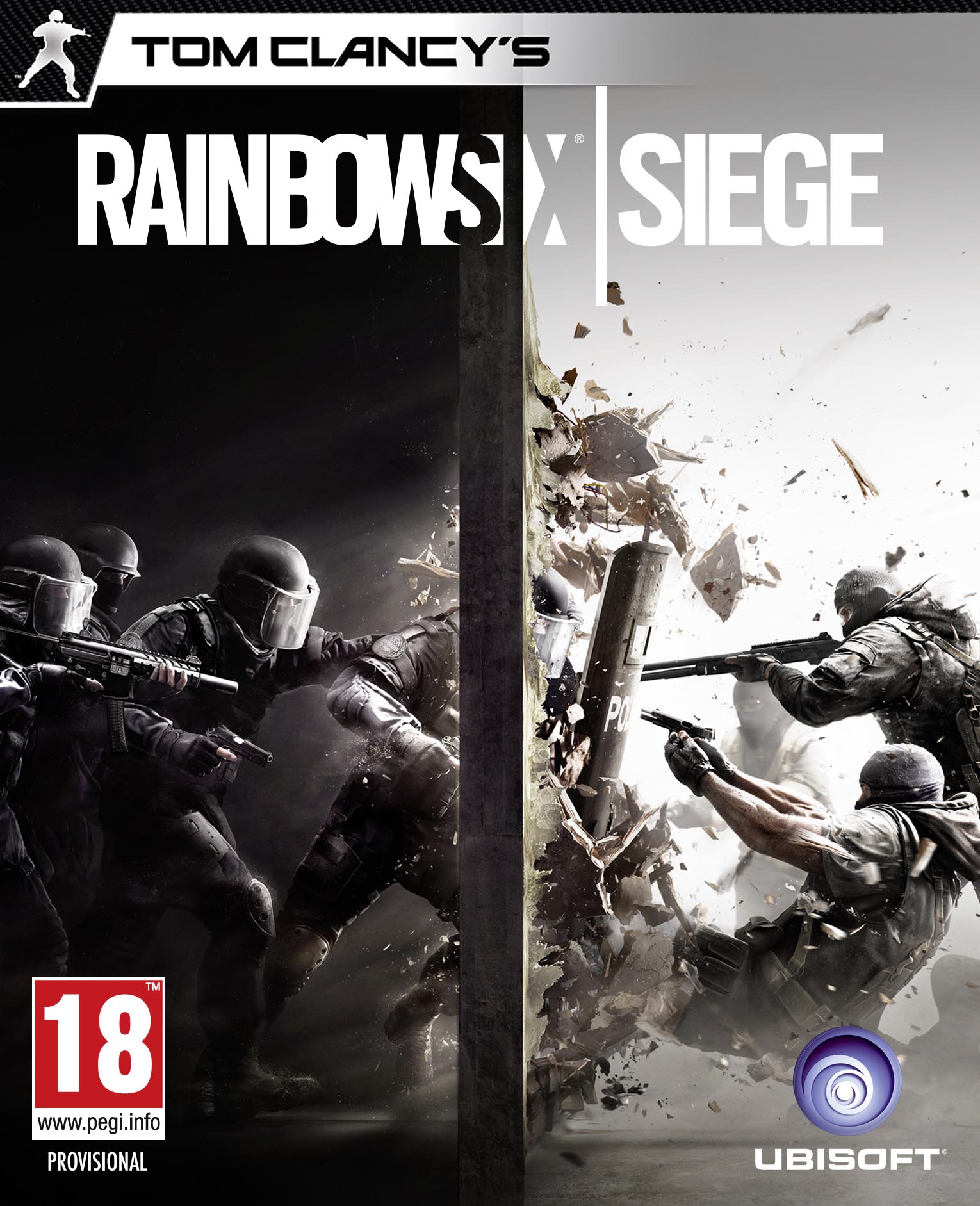 There’s already a million comparisons that link Tom Clancy’s Rainbow Six Siege with multiplayer-only shooters like Titanfall, Evolve and Star Wars Battlefront, and for good reason. After all, the days of the shallow campaign-free $60 retail first-person shooter is upon us. Still, if you’re looking to get an idea of what you’d be hopping into if you decide to fork over sixty of your hard-earned dollars on Rainbow Six Siege, the best comparison might be to a game that completely lacks any semblance of multiplayer functionality. The next sentence is going to seem odd, but bear with me here, as Ubisoft’s shallow shooter gives off some subtle vibes that could remind players of a certain early 2015 title that was panned for its value.

Rainbow Six Siege feels like The Order: 1886 of multiplayer shooters.

Both of these games are deeply flawed experiences that feature a couple of cool ideas, and both are titles that, when all is said and done, will be forgotten by the masses sooner rather than later. Think about it, The Order: 1886 features an awesome futuristic version of 1886 London and some of the best visuals that we’ve ever seen in a video game. Sure, its gameplay was as boring as it gets and its story doesn’t really go anywhere important during its five-to-six hour campaign, but it has a couple of calling cards to its name at least. Rainbow Six Siege is an equally shallow title that will be played for a bit longer than The Order: 1886 simply because it’s a multiplayer title, but the entire concept is built around two central tenets: strategies are initially novel and environments are highly destructible. Interesting ideas, certainly, but when you take a look at how little is truly there and combine this with some loose shooting mechanics, iffy server stability and a downright exploitative monetization plan, the result is a game that you shouldn’t feel bad about skipping entirely. 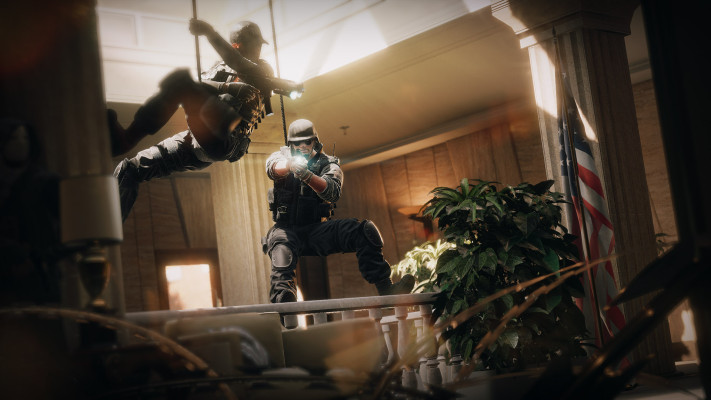 Before diving into the litany of problems with Ubisoft Montreal’s multiplayer shooter, it’s certainly helpful to discuss the things that Rainbow Six Siege does well. There’s a really dynamic, cool idea at the center of Rainbow Six Siege, and when you’re in a game and using the environment to your advantage, there’s truly nothing like it in this space right now. What other games allow you to blast holes in walls to create new sight-lines, and what titles allow you to dramatically alter the movement of an enemy through a map thanks to tools and gadgets? When you’re in the thick of things and have the opportunity to improvise in a slower-paced, more strategic setting, the results are often deeply satisfying. After all, there aren’t too many multiplayer shooters out there that allow you to win with a skillset that encompasses intelligence over reflexes. Granted, a great deal of what makes Rainbow Six Siege fun to play is solid communication with your teammates, and thanks to some spotty voice chat quality on PC, it’s not likely that you’re going to be able to hop into a lobby and find a full team of communicators. Still, when you play Siege strategically, you’ll get some of those moments of excitement that made its initial E3 2014 reveal so gripping.

Even though Rainbow Six Siege only ships with eleven maps, which is a frankly anemic number for a title that has a hard time justifying its price tag, there’s quite a bit of variety here to be enjoyed. Yes, you’re going to be heading to the same handful of spots on every map, so the novelty will quickly fade once you figure out the tricks on each stage, but it’s hard to argue that there isn’t a great deal of thematic variance. The best communication-heavy multiplayer games have a ton of easy call-outs, and when you’re rushing through homes, Christmas-themed villages and parked airplanes, it’s not going to be tough to relay information about points of interest to your teammates. The aforementioned Christmas-themed map is clearly the star of the show here (sorry cocaine-laden drug den), as who doesn’t want to enjoy a fair bit of arterial spatter right underneath the mistletoe? Whether or not the promised free DLC maps wind up being as unique as the ones that shipped with the launch edition of Rainbow Six Siege remains to be seen, but the fact that maps actually feel like they had some love put into them is definitely a plus. 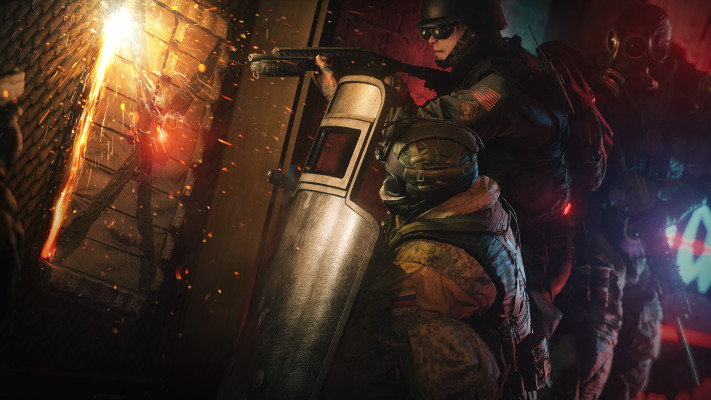 If you’ve made it this far, you’re about to really get into the thick of the criticism that has been welling inside my soul for a few days now. Some are calling Rainbow Six Siege a “focused” experience, and it’s totally okay if you feel this way, but that term feels more like a euphemism for “hollow” than anything else. The elephant in the room can’t be ignored: if Rainbow Six Siege was launched as a free-to-play title with the same amount of content, it would be tough to find people who think it’s worth a full retail price-tag. When games like Dirty Bomb feel as polished and content-rich as your big-budget $60 title, then that’s a real problem. Let’s go over exactly how much content is in Siege: ten Situations, which are essentially PvE matches where you’re the only player on your team, Terrorist Hunt (which is basically PvP, but one team is made up of AI soldiers) and traditional 5-on-5 multiplayer that features a number of modes that all literally feel the same. The last point is especially notable when you consider that the Multiplayer hopper doesn’t contain any mode differentiation, as every match is round-based and involves the offense trying to get to an objective that the defensive team is guarding. If Call of Duty only shipped with Search and Destroy, AI Search and Destroy and single-player tutorial Search and Destroy, would that be considered a complete offering?

During my time with Rainbow Six Siege, one of the most glaring flaws with multiplayer-only games reared its ugly head, as server errors prevented me from getting into a game for hours at a time. Combine this with some long matchmaking times and the result is a game that can leave you staring at menus and playing tutorial missions if Ubisoft’s servers fail. A reviewer can only write a review based off of the experience that they have and playing Rainbow Six Siege is not the rock-solid online experience that every multiplayer-only title should inherently be. There isn’t a ton of content to enjoy here as is, so if that content occasionally becomes completely unavailable, as Wednesday’s server issues showed, then there really isn’t anything to do here. Granted, this is a problem with all games of this ilk, but when there is evidence of shaky servers during a review period, then it absolutely warrants mentioning.

While the latest Tom Clancy offering can have some interesting gameplay moments from a conceptual point of view, the actual act of shooting enemies definitely leaves a lot to be desired. If you were to take inventory of all the major shooters of the last couple of years, Rainbow Six Siege would fall towards the bottom of a list ranking shooting mechanic tightness. It may not take a ton of bullets to kill an enemy, sure, but when aiming shots doesn’t feel accurate on a mouse and keyboard, then something is amiss. Make no mistake, if you’re a good shooter player, you’re going to get yours, but there are definitely going to be some opportunities left on the table. A full retail first-person shooter experience should feel as though no bit of mechanical polish could possibly be added, at the very least, and Rainbow Six Siege feels as though its hit-box detection is acceptable most of the time. For a game that is practically begging you to spend your money constantly, you would hope that the core package would feel tight mechanically. Combine this with visuals that certainly leave a lot to be desired and some bugs that will absolutely sink your experience, and it’s clear that Rainbow Six Siege is one of the least polished shooters of 2015.

The first few images in this review are from the game that Ubisoft wants you to think that you’ll be playing. When Rainbow Six Siege was first revealed, we saw a game that, while not the prettiest game on the block, it still was still visually impressive at first glace. Fast forward to 2015, and we’re left with what might be the worst-looking AAA game of the 2015. From muddled textures that look straight out of the PlayStation 3 generation to aliasing that seems to poke through no matter how much you tweak your PC’s settings, Rainbow Six Siege feels like the latest game to suffer from Gorgeous Trailer Syndrome (even more so than Watch Dogs). Games don’t have to be perfectly beautiful or be loaded to the brim with things to do, but when you compromise on content so severely, then one would hope for something nice to look at, at the very least. Rainbow Six Siege isn’t without its bugs, either. The worst technical follies that arose during my time with Siege were the two times that I completely fell through the world and the three times that walking into geometry completely prevented my character from moving until I was killed. Rainbow Six Siege penalizes players when they die, as you have to wait until an entirely new round to respawn (which, at its core, is a great mechanic); having to sit around like a fool thanks to the floor giving out is not the most entertaining way to spend your time.

Is it so wrong to expect more from video games? Is it asking a lot for a game to have polish and substance around its cool central idea? These might seem like questions with obvious answers, but this is what we need to ask when titles come out that feel more designed to print cash than they do to sustain a player base. Rainbow Six Siege‘s core concept, namely its destructible world and reliance on communication-based strategy, is strong, but everything surrounding it seems to falter. From the fact that it has some of the weaker hit detection we’ve seen in a retail shooter this generation, to its severely downgraded visuals and early server issues, Rainbow Six Siege is not the game that you hoped it would be. It might grab you right away, it might pull you in and hold you close, but take a step back and look at what Ubisoft thinks a retail multiplayer shooter should be. Is this really what we’ve come to accept from AAA development?