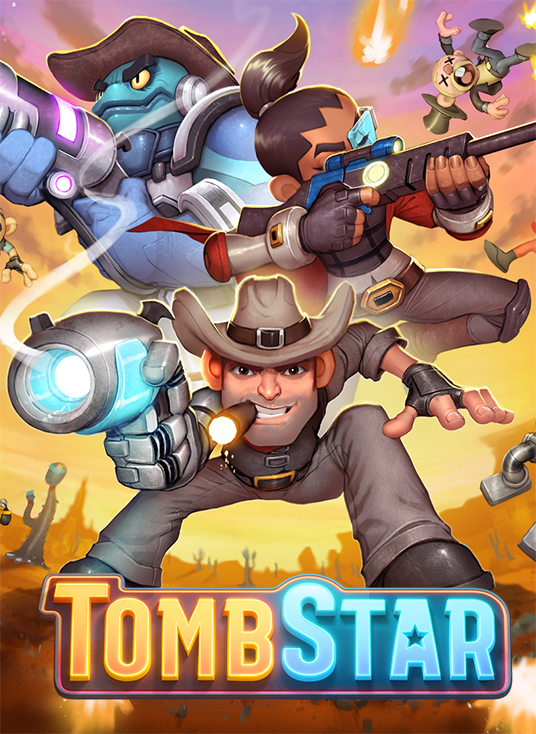 The planet TombStar is in trouble.  The GrimHeart gang has taken over the place and run wild, driving away the settlers to use the planet as a base for their lawlessness.  A trio of gunslingers has been sent to deal with this problem starting with whitehatted not-quite-sheriff with mid-range stats Jack Galloway, branching out to the fast and deadly sniper AJ Starchild, and finally the tough but slow alien Benson Gara.  They’re here to bring justice to TombStar and they don’t stand a chance of surviving.

At least not at first.  Like any good action-roguelike TombStar‘s starting loadout is good enough to get you up to speed on the basics, but nowhere near strong enough to survive very far.  Each character comes with a signature gun and unlimited ammo, plus their own version of the dash and a special ability.  The basic level structure is room-hallway-room, with most most rooms holding a handful of baddies, and clearing them out earns a small reward that can hopefully be used to buy something bigger.  Keys unlock perk and weapon chests, gold buys sundries like keys, health and ammo, and the ticket/chip things can be used to upgrade perks.

You’ll want to spend every bit of the rewards, too, because the GrimHeart gang didn’t take over a planet by being shy with the firepower.  Even the weakest enemies take a few bullets to go down and it doesn’t take long for the outlaws shooting a single bullet at a time to be joined by ones letting out a fan of shots, bouncing explosives, quick knives, boomerang bowler hats and a good deal more.  Enemies are all distinct from each other and you can generally tell what you’re facing before they’ve fired a shot, thanks to them coming in a decent collection of human, robot and alien forms. 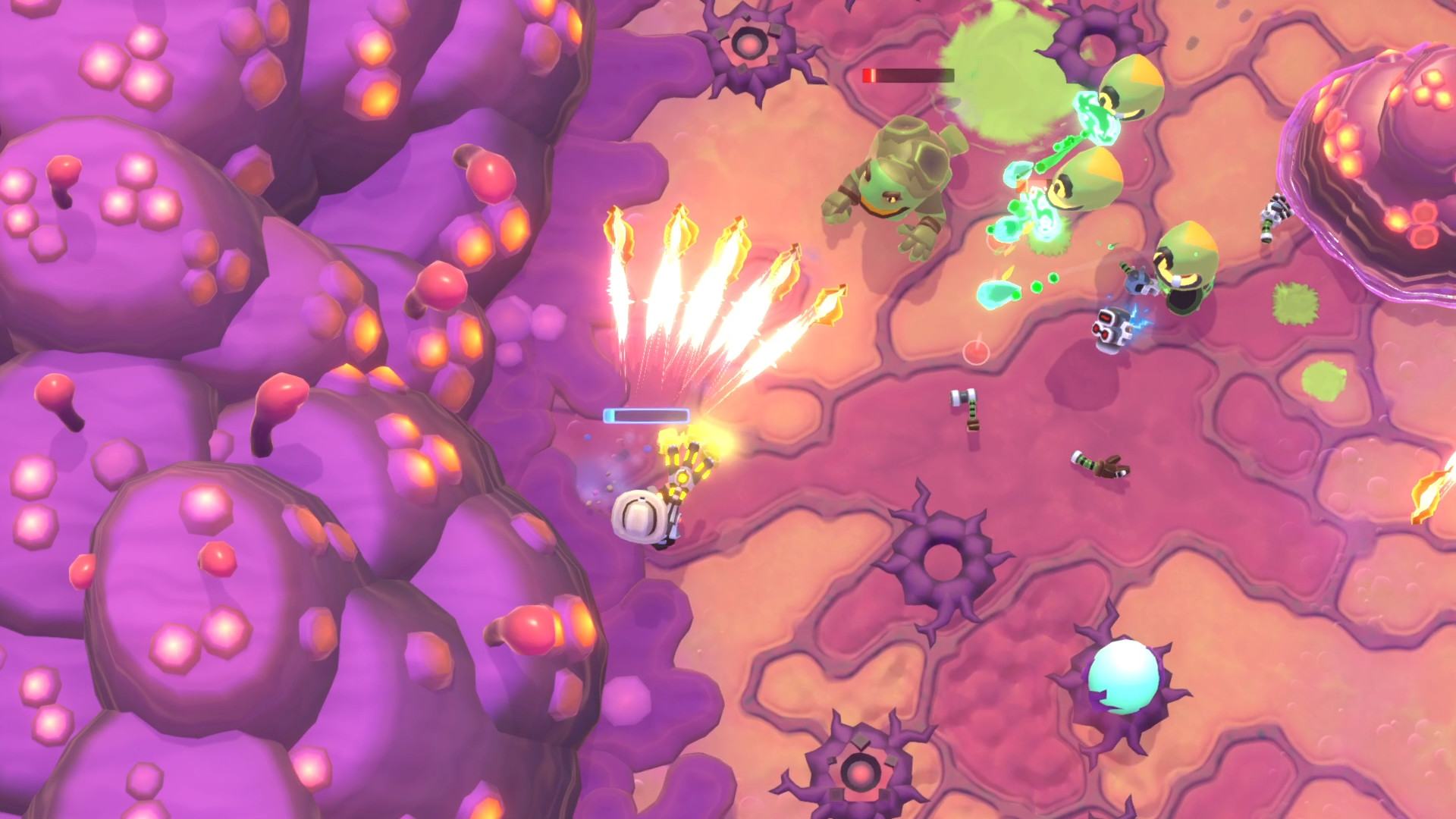 While the rooms aren’t overly packed, generally topping out at about half a dozen baddies at a time, their pattern of bullet and melee attacks means you’ll need not only a good grasp of your chosen hero’s abilities, but also a fast read of the terrain.  The best way to avoid taking a bullet is to avoid being where it’s headed, but second-best is using cover to block it.  Destructible terrain like rock pillars or the ruins of old houses come in handy for dividing up the various threats, and most rooms also have a table or two you can flip to act as temporary cover.  A variety of exploding barrels make for good traps as well, but it’s worth noting that the environment is completely neutral in this fight and can easily work against you.  You can’t shoot through a flipped table or pile of rocks any more than the enemy can, and exploding barrels are notoriously fickle allies.

The best allies a gunslinger can have, of course, are their weapons, and it’s this is where TombStar begins to fall flat.  Each run starts out with the gunslinger having their signature weapon and no limits on the ammo, and one of the rooms in the starting level will have a new gun in it.  The problem is that found guns need ammo, and it’s here that TombStar begins to feel stingy.  You can get ammo by finding it as a room reward or buying it at the level’s shop, but ammo drops are rare and cash is tight enough that it’s generally better to spend it on health or a key.  Being able to unlock new perks and guns makes for a much more entertaining run, and it’s already a utilitarian enough expense when you need to top off health.  It makes sense that more powerful equipment shouldn’t be used as much, but it’s as easy to run out of ammo for a common or rare gun as it is a legendary one thanks to the damage balancing.  Having a couple hundred rounds for a low-damage high-fire-rate gun only seems like a lot until it’s gone. 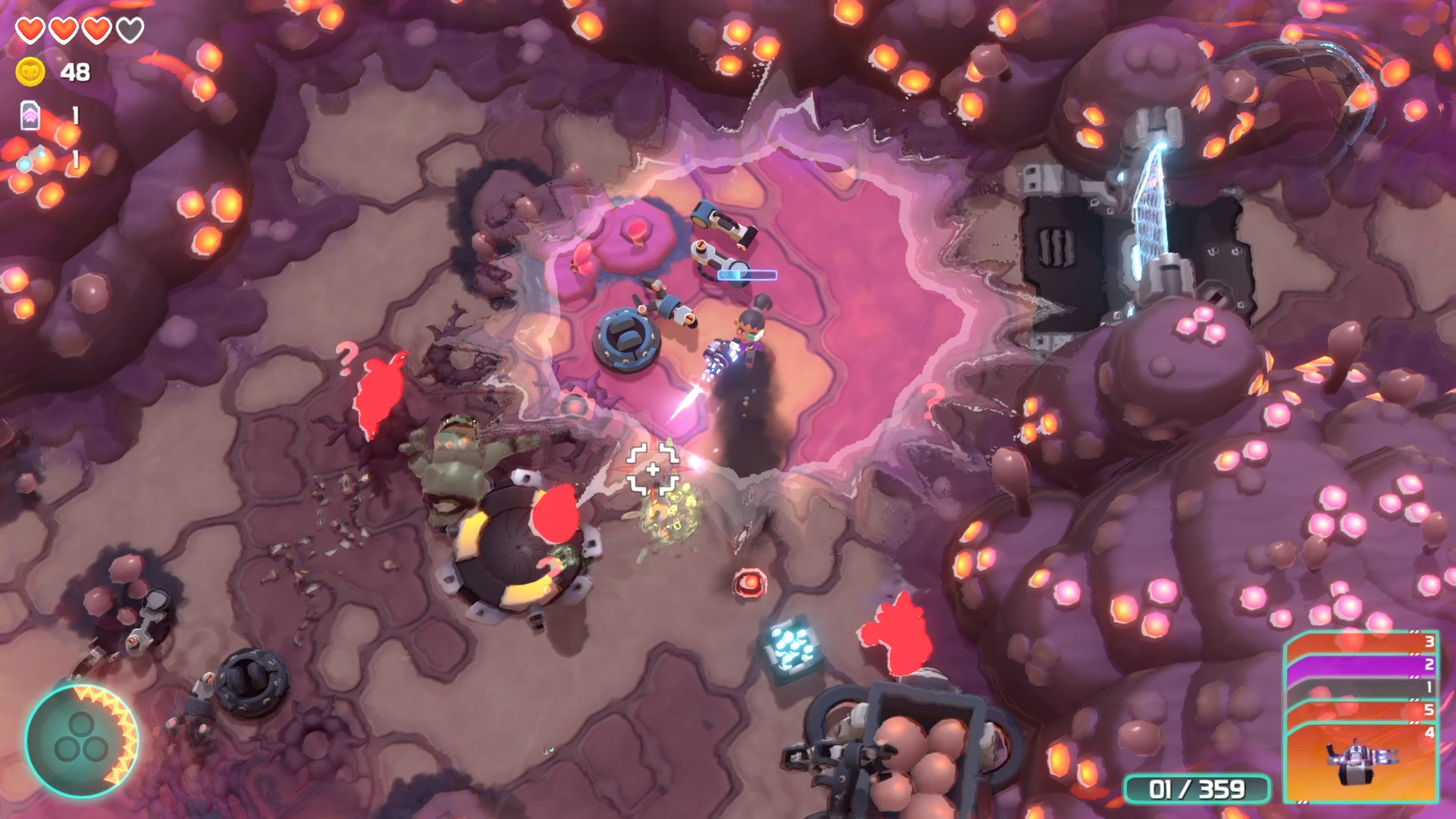 Another aspect of roguelikes also ends up feeling shortchanged, which are the perks.  While there are a good number of them, you only find one per level and another for beating a boss.  Not every level has a boss, though, so creating an interesting build takes clearing out several levels to get a good start on.  Levels are decently sized as well, generally about a dozen rooms or so not including the boss, so it can be a good distance into a run to feel like the character build is more interesting than simply “dodge and shoot.”

This isn’t a problem fixed by the overall progression outside of the level, either.  While each run does earn experience, and each new level comes with its own reward such as new items and weapons added to the mix or even badges you can equip for a pre-run perk, the amount of goodies you’ll find down on TombStar remains roughly the same.  The twin-stick run and gun shooting action is always good, but the player progression feels slow, and it always seems like the fun weapons are either best conserved for later or unusable when the ammo runs out. 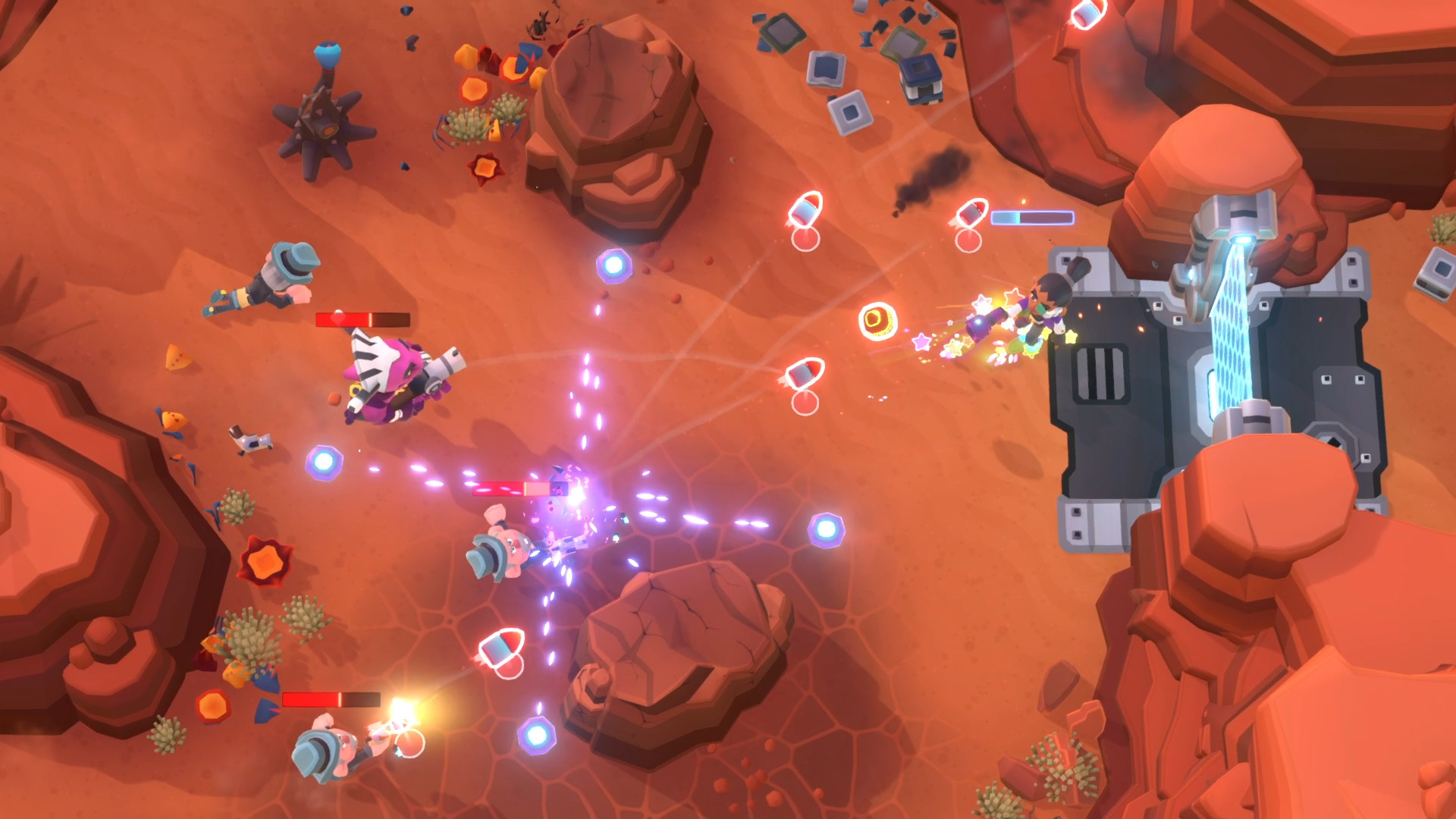 The basics of TombStar are well done, with nicely-frantic action that keeps the bullets flowing at a good pace.  The variety of enemies makes each encounter use all the skills and perks you’ve got available, dodging and taking cover while hoping there isn’t someone off to the side about to spring an unpleasant surprise.  It’s a good combat flow, but the bits that make it better come slowly or run out just as you’re starting to enjoy them.  For an action-roguelike, TombStar nails the action but moves too slowly on the roguelike, leading to a twin-stick shooter whose best bits never last long enough to make it great.