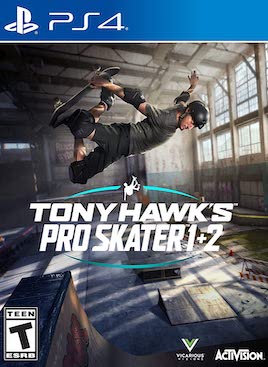 Editor’s Note: Portions of this review originally appeared in our PS4 review of Tony Hawk’s Pro Skater 1 + 2, which can be read in full here.

With what would be their last game as a studio — before their subsequent absorption into Blizzard Entertainment — Vicarious Visions pulled off another great remake of a cult classic in the form of the Tony Hawk’s Pro Skater series last year. Like the Crash Bandicoot N. Sane Trilogy before it in 2017, last September’s Pro Skater 1 + 2 was more than just a new coat of paint. More so, it was more than just a reimagining of what those once blocky, deliberately-foggy, view distance-restricted maps would probably look like today. Vicarious Visions’ knack for homing in on what made the original craft so addictive to return to was where Pro Skater 1 + 2 truly shone.

Returning to where it all began — where, it can be argued, the cult-establishing legacy that is the Tony Hawk’s Pro Skater series was properly established — and the positivity that stems will of course vary between players. Like all remasters or remakes of decade-old properties, former detractors or those who simply held differing tastes may not feel the most impact on revisiting these stages or pulling off those tricky combos between half-a-dozen pieces of the environment. Roughly six months after initial release across PS4, Xbox One and PC, Tony Hawk’s Pro Skater 1 + 2 is still a joy to play. To reiterate a point made in my original review: it’s a testament to original developer Neversoft’s approach to level design and the sandbox, improvisation-esque approach that even real-life skateboarding has long relied on. The game’s release across the now-current generation consoles via PS5 and Xbox Series X/S brings with it neat additions both technically as well as aesthetically. Improvements in some parts, while others surprising at just how much they add to the experience.

It’s not a faultless step up. Anyone coming into this release having played the game on previous-gen systems (or are maybe completely new to last year’s remake) will notice the glaringly obvious parts Pro Skater 1 + 2 has unfortunately kept untouched. Disappointing as it is to find that menus still run at a restrictive frame-rate of 30FPS. That this is even still a thing in 2021 is in one point jarring and in others confusing to say the least. But get past the menus — in all their jam-packed customization and hours spent fine-tuning the best assortment of clothing and oddly-colored facial hair to one’s custom-character alike — and Pro Skater 1 + 2 still shines as a game one could get lost in, wasting hours upon hours freely skating its multitude of levels. A task made even easier due to one of PS5’s biggest additions to the experience: its load times. An immediate remedying of arguably one of the original release’s major criticisms; not only does boot up see a significant cut to time, but levels too are but a matter of seconds from selection. Even Pro Skater 1 + 2‘s more infamous examples on the loading side of things — Mall, for example — look to be the biggest beneficiaries of the PS5’s SSD. 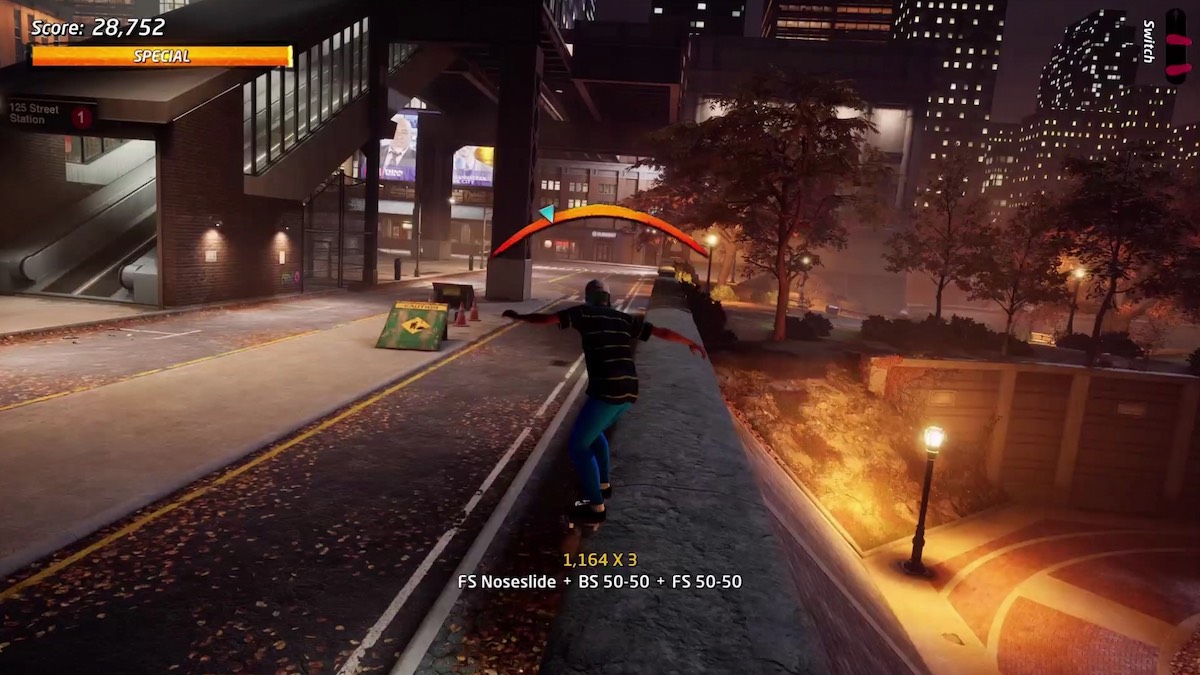 There’s an argument to be made on whether the opportunity was there for Vicarious to inject a more substantial originality alongside returning proceedings. To go beyond subtle tweaks and a visual reimagining of a level or two and maybe add new, possibly less-repetitive objectives in later stages. Given that just like the originals, a lot of the non-competition stages’ objectives generally consist of: scores, combos, hunting down five of a particular object, as well as pulling off particular tricks across certain gaps or parts of the environment. But it’s to Vicarious’ credit in that they refrain from putting their own stamp on one too many areas and of making changes to what is a tried-and-tested sequence. A sequence whose similarity is more than compensated for by way of the ingenious ways in which level design — and the traversal of such — is incorporated.

Puritans can of course customize the control schemes so that it remains true to what came before which, again, in itself a small but thoughtful appreciation of the original games. But it’s these small but smart add-ons where Vicarious find the ideal sweet spot in freshening up the experience without downplaying what made the originals so addictive to begin with. If anything, the improved visuals on top help to provide an extra level of identity and unique flair to particular levels whose themes or implications of a setting were less visible. The once “foggy” masquerade of hardware limitations replaced with bright, sun-baked surroundings in one instance and desolate abandonment of an interior in another. Nightly city environments benefit from the multitude of light sources as do levels like Venice Beach whose own visual upgrade makes working out its concrete, labyrinthine playground an even more enticing experience. And on PS5, that visual improvement is made even better. 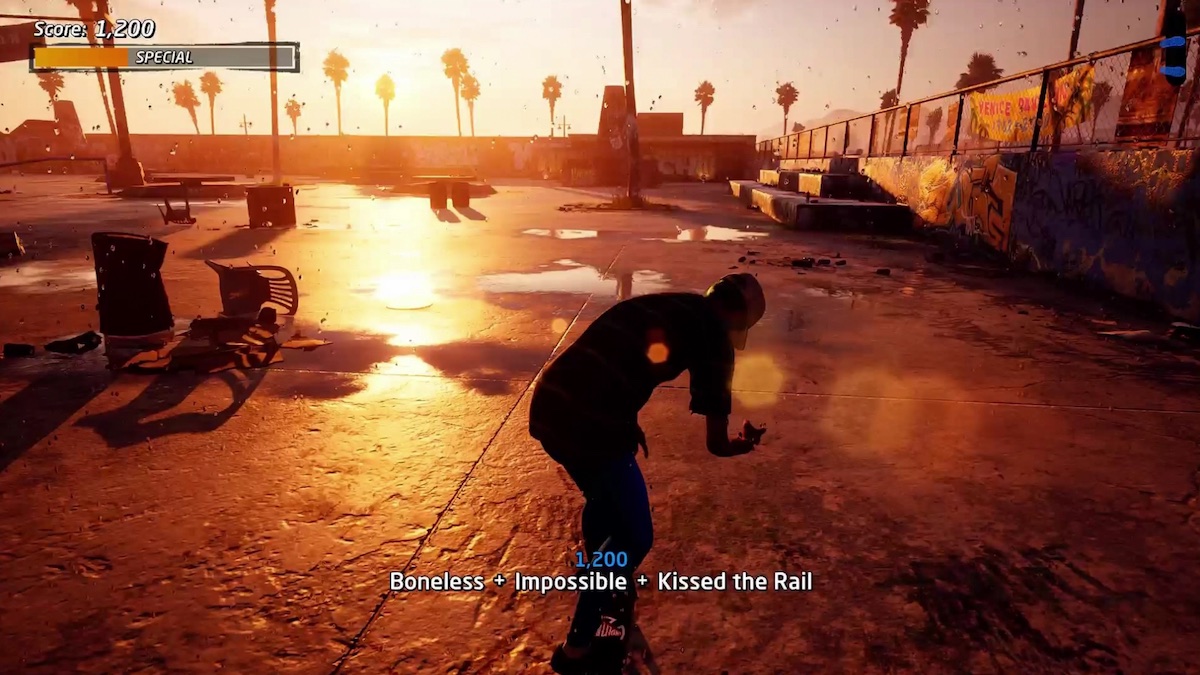 Though the generational leap may simply be sharper, crisper imagery and occasionally higher-resolution textures, I’d be lying if I said I didn’t love going back to Venice Beach (again) having All My Friends Are Nobodies blasting on constant repeat. Its brilliantly-tailored soundtrack — a mix of returning and debut licensed tracks added to the playlist — still offering a fond compliment to Pro Skater 1 + 2‘s pick-up-and-play, short bursts of enjoyment.  It isn’t long before fans of the originals are hit smack-bang with all those same thrills, urges and tentative “what-ifs” asked of ourselves that the tight line between landing and outright ruining a sizeable combo creates. How best to spend each one of the two minute periods that tend to fly by a lot quicker than previously assumed. How best to reach those tricky spots that can be approached in a number of ways. Better still: how one is to reach the many hidden “VV” icons scattered about the game — the only real addition Vicarious include in regards to optional collectibles to hunt down.

But even the very act of approaching certain objects and parts of the environment is another area that the PS5 version adds to that on a surprising level. Namely, the DualSense’s haptic feedback feature and how with Pro Skater 1 + 2, things like rumble and vibration are now not only contextual, but multi-layered. Those of you who have played the PS5 remake of Demon’s Souls or even Astro’s Playroom may already have a firm idea on how this plays out, but it’s still great to discover all the minute little differences and deviations. How even the simple, all-purpose definition of “rumble” may not even exist now — more like an assembly of rumbling, rattling, shaking and nearby disturbances that all add up to something much deeper. How the shaking of nearby vehicles speeding past differs to that of your board landing on solid ground again. How even grinding a flat rail is different to grinding one at an angle. And how that increase in feedback is affected by both your speed and current balance. An aesthetic touch it may solely be, it’s great to find a game that makes great use of one of the DualSense’s more marketed features. Just like the reaction one had playing through the PS4 iteration, it’s this hidden level of replayability and curiosity where Pro Skater 1 + 2 kicks into gear. 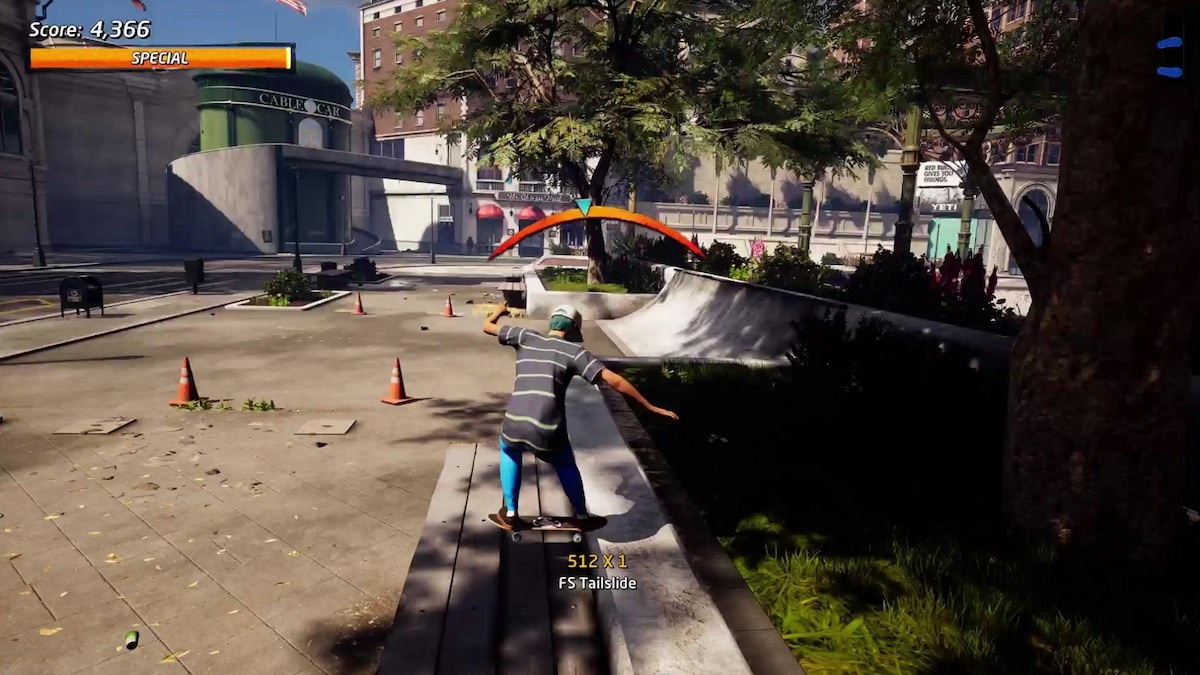 Pro Skater 1 + 2 is chock full of challenges and additional achievements to unlock. Most, if not all, rewarding you with additional cosmetics and tools with which you can use to further customize your own player-character away from the veteran and newcomer skaters that are unlocked from the word go. Yet despite the significantly large amount of challenges to overcome here, never for a second does Pro Skater 1 + 2 come across as if it assumes that players need to be rewarded as constant and as frequently as its laundry list of requirements stretches towards. A significant amount of requirements usually met without the player ever noticing on first go and while the game does still pop up an indicator that a challenge has been completed, it doesn’t ever feel like showering the player with shallow praise.

So yes, there’s a lot of replayability to factor into the remake and while the end result still lands you with new cosmetics and currency to spend on the thousands of pieces of apparel and skateboard components, it at least gives incentive for players to jump back into levels long after the list of objectives and stat points have been well-and-truly crossed off. But there’s no better source of investment than Pro Skater 1 + 2‘s rendition of the Create-A-Park mode. And just like the main Skate Tours, Vicarious Visions just about strike an excellent balance in adding to the formula without diminishing the enjoyment one has in going wild with design. Credit where credit is again due in Vicarious’ refusing to restrict players to some relative believability so far as size and positioning goes, because some of the more wacky endeavors stumbled upon at the time of writing have resulted in this mode taking up far more hours than initially assumed. And as someone generally not interested in “make your own” type modes or full-blown games for that matter, Pro Skater 1 + 2 finds a way to worm its way into focus. 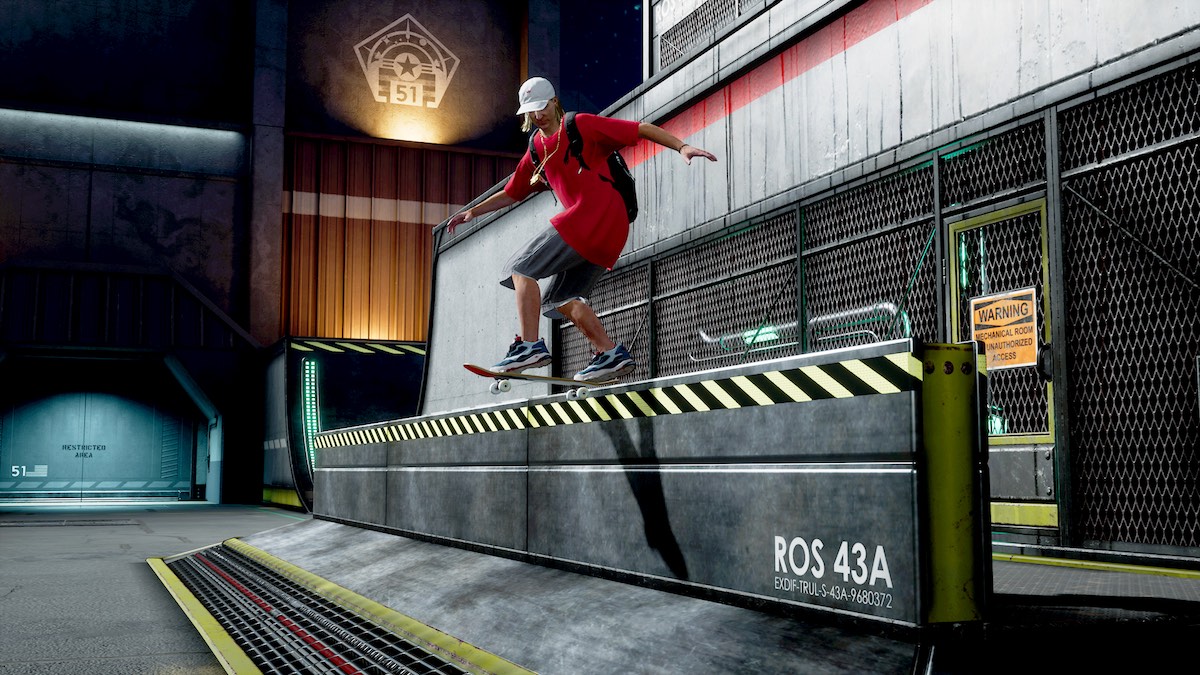 Around six months since Tony Hawk’s Pro Skater 1 + 2 first graced our screens, Vicarious Visions’ reimagining of the famed skateboard series is still as fun, giddy and accessible as it always was. And with the game arriving on new consoles, though this may not be some astonishingly absolute improvement in all corners, the PS5 release especially still offers up noticeable improvements to the experience. Avoiding the peril of subtracting from such nostalgic appeasement, instead adding to it in a way that makes levels feel both original yet familiar all at once. But it’s through the added perks of its improved load times as well as the DualSense controller’s haptic feedback alike where Tony Hawk’s Pro Skater 1 + 2 on PS5 results in an even more joyous revisit to one of gaming’s most cherished series.