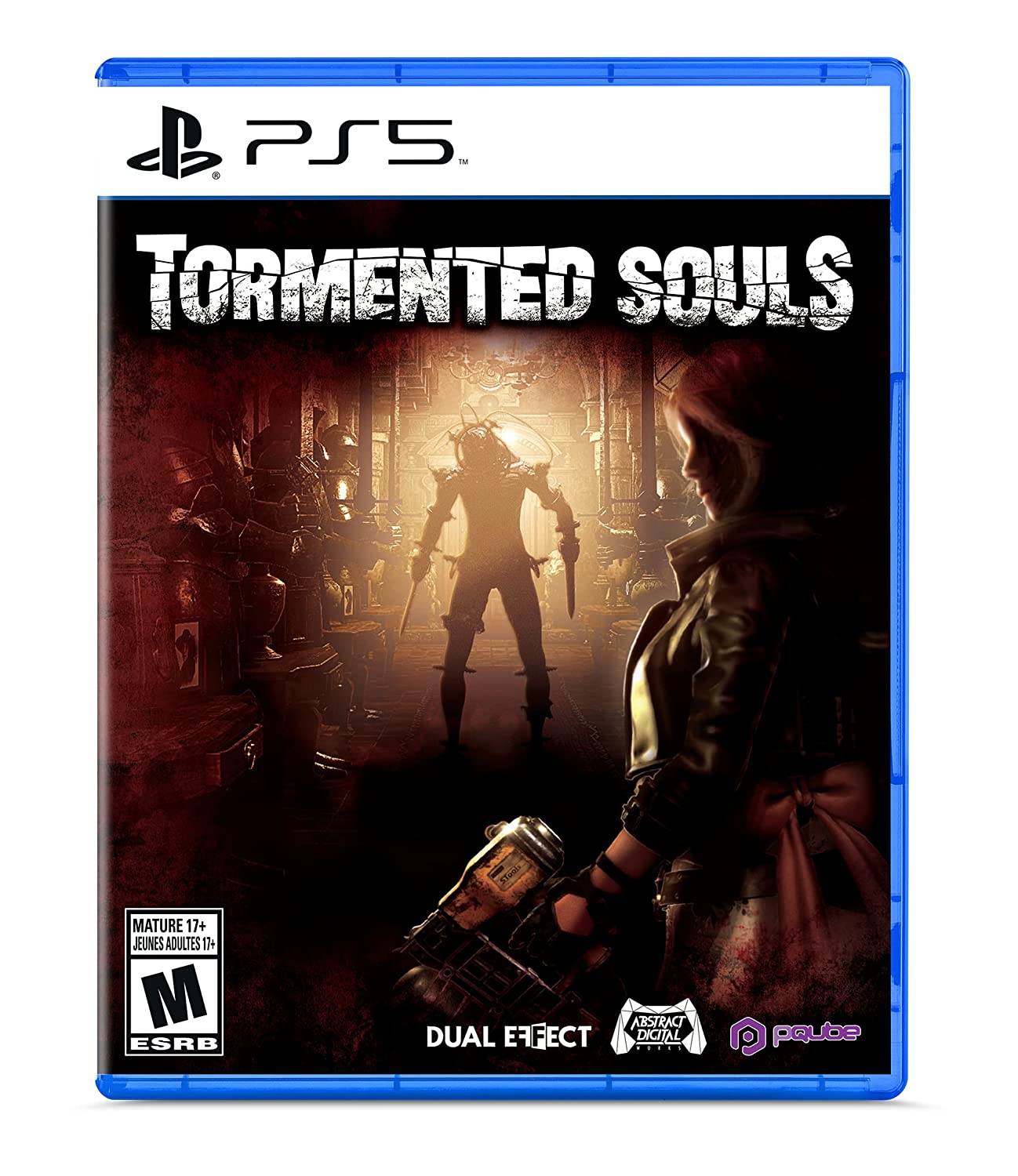 Imagine, if you will, a time when survival horror games were meant to be an interactive movie. A game that makes survival difficult by limiting your means of defense, using fixed camera angles to mimic a movie, and literally pressing forward on a controller to go forward. Games that keep you on the edge all times while entrenching you into their eerie world with atmospheric visuals and audio. Those were the days, and the newly-released Tormented Souls looks to bring all of that back with ridiculous puzzles to boot.

Thanks in conjunction with PQube, Abstract Digital Works and Dual Effect, Tormented Souls is a traditional survival horror game that features modern visuals. From the initial load you’re greeted with a familiar warning. Tormented Souls takes cues from the likes of the original Resident Evil trilogy and Silent Hill. While both of those series have evolved in different directions (and Silent Hill being flat out absent), Tormented Souls is full of tropes that comes from both titles that blend together seamlessly.

The setting and plot of Tormented Souls also features a combination of both Resident Evil and Silent Hill. You play as a woman named Caroline that’s mailed a photograph of two girls. Caroline has a vision and decides to head to Winterlake Hospital, which has been abandoned for some time. Unfortunately, there are leftover monsters that focus more on the Silent Hill design of horror rather than having zombies. Caroline wakes up naked in a bathtub and is missing her right eye. A puzzle is immediately required to try to get out of the room. 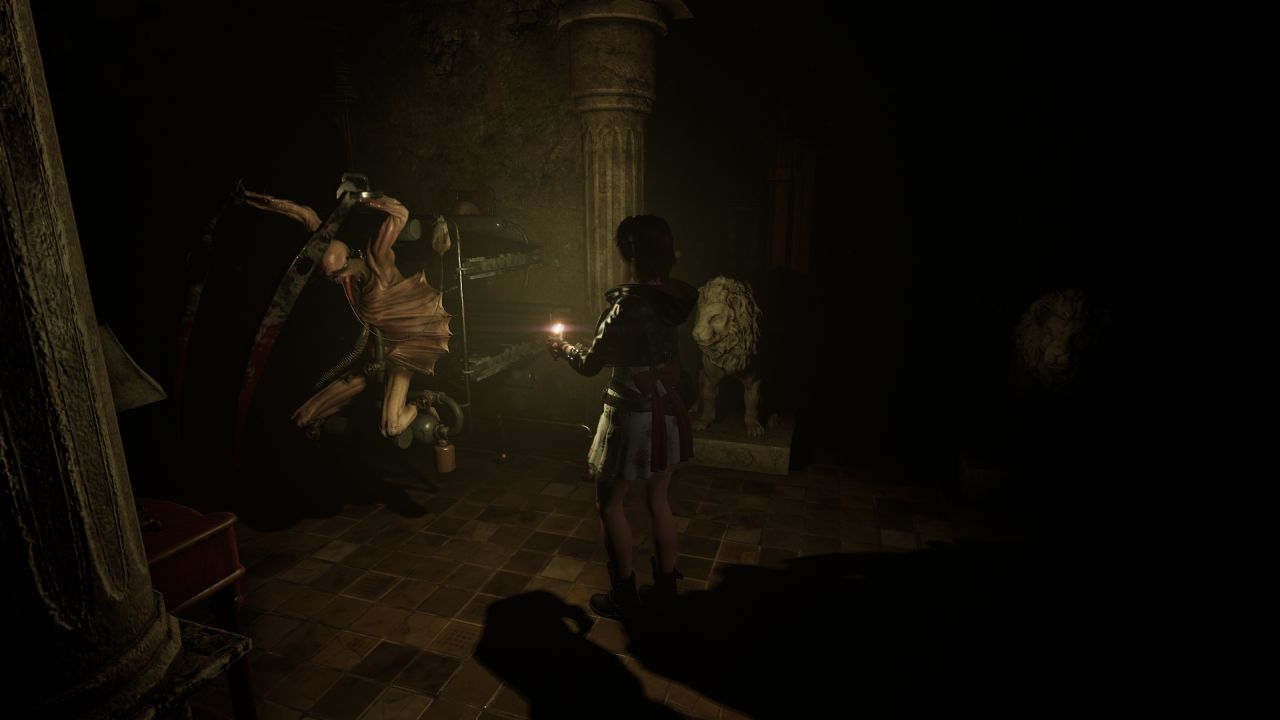 Winterlake Hospital offers tight corridors with a combination of light and dark areas. Taking from the Amnesia franchise, if Caroline is exposed to the dark for too long, the shadows will take her and provide instant death. Most of the hospital is run by generators that need to be powered on. This allows Caroline to put down her lighter and actually use a weapon to defend herself against the monsters. She’s initially provided a nail gun while pieces of other weapons are available later on. A crowbar can also be used for self defense when low on ammo. The menu system is derived from Resident Evil, as well, but has been updated to include a touch-interface akin to point-and-click games. Interfacing objects to do certain things for puzzles adds another layer of difficulty.

The controls of Tormented Souls are somewhat what you expect from a late ’90s survival horror game, but with improvements. Fixed camera angles are the name of the game, which means tank controls are prevalent. The directional pad is used for traditional tank controls with up being forward, down taking a step back, and right and left to turn. The joystick can be used to freely move in whichever direction you please, but this is an issue when the camera changes and takes getting used to. I actually found it somewhat difficult to go back to the old way of things. 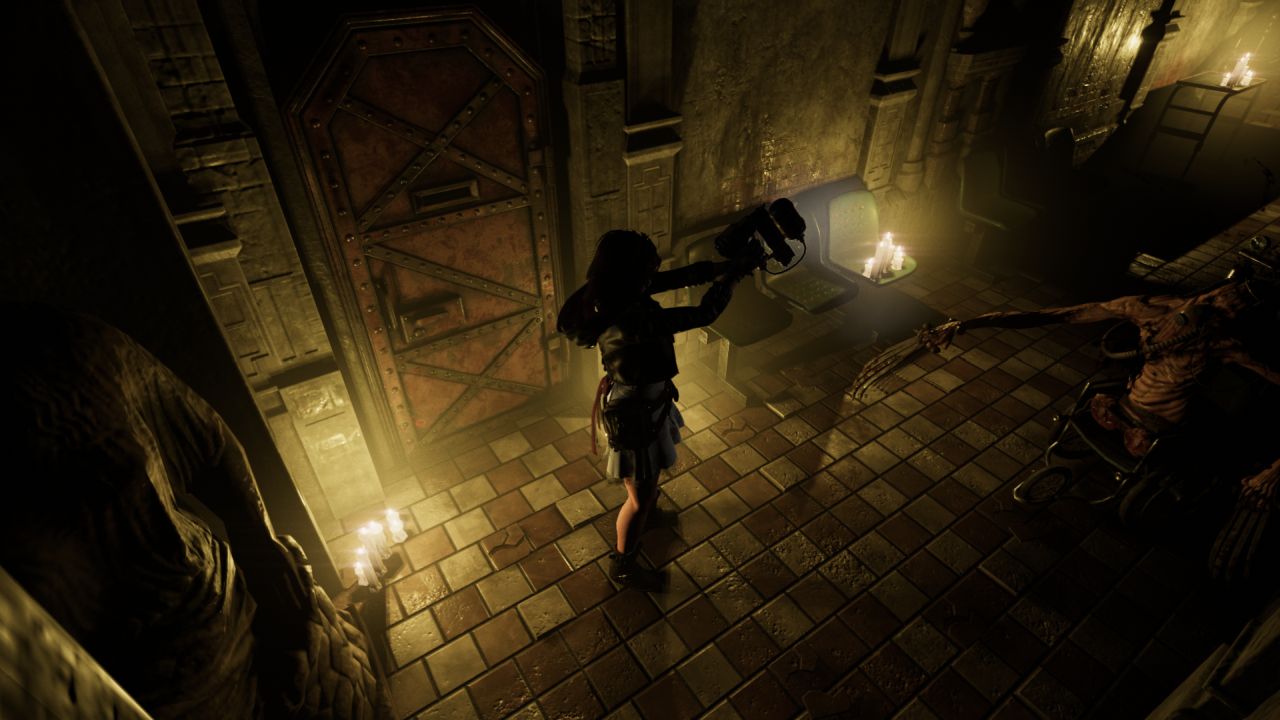 The gameplay is heavy whether it be moving or in combat. You won’t be able to move Caroline while aiming, which is one aspect that should have been added. The input is extremely slow when using a melee weapon. Caroline has a dodge back option, but it’s confusing to pull off in the heat of the moment. If you try to trade blows with an enemy, you’re going to take damage. It’s difficult to maneuver areas and this was by design. It’s also worth noting that while this is on PS5, the DualSense doesn’t offer anything innovative.

What the PS5 and PC versions do offer are the highest graphical fidelity for the game. The PS5 version runs at 4K 60 FPS and it’s buttery smooth for the most part. The environment uses a pre-rendered background, but modernized as objects stick out. Unlike the classic titles that make it apparent that there’s something to select in the background, this requires more digging. The lighting is wonderful in the game as specific surfaces will reflect like and transition with the camera. While some of the environments are a dreary nightmare, there are a ton of areas that offer vintage design that looks beautiful. There are also a ton of areas of the hospital that are inspired by areas in the classic horror titles. The player and monster models are also extremely detailed. 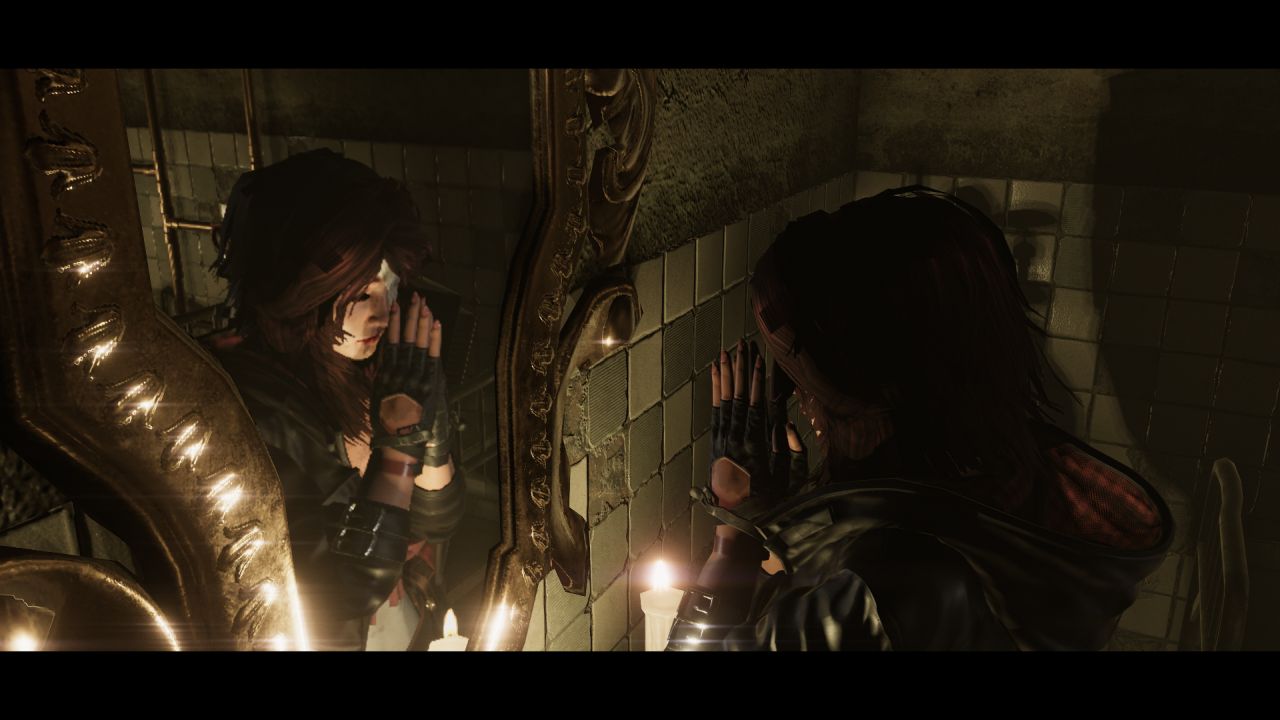 There are a few issues with the game design, though. There’s action, but not a lot, and not a wide variety of enemies. There’s more of a focus on backtracking and puzzle solving to advance the game. Monsters, once killed, do remain but you’ll be able to walk right through them. Aim assist is on in the game, so the easiest way to identify a monster outside of a noise when entering a room is to just aim the weapon and see if Caroline adjusts. You can blindly take most of the monsters down. The actual story isn’t intuitive either, and the voice acting is bad. Although bad voice acting was an aspect of early survival horror titles, I’m not sure if this is by design or not. Lastly, outside of one cutscene where Caroline is surprised with the classic horror film pan out-of-focus camera, she’s largely unscathed by anything that’s going on.

What shines the most about Tormented Souls is its classic horror atmosphere. While not necessarily being on edge the entire time, the game is more about setting the mood of being in this hospital rather than depending on high action and jump scares. What accomplishes this is the amazing soundtrack. The game even offers save room music and uses a reel of tape to save games. The monster effects sound weird by design, but it’s nothing that’s going to scare you. 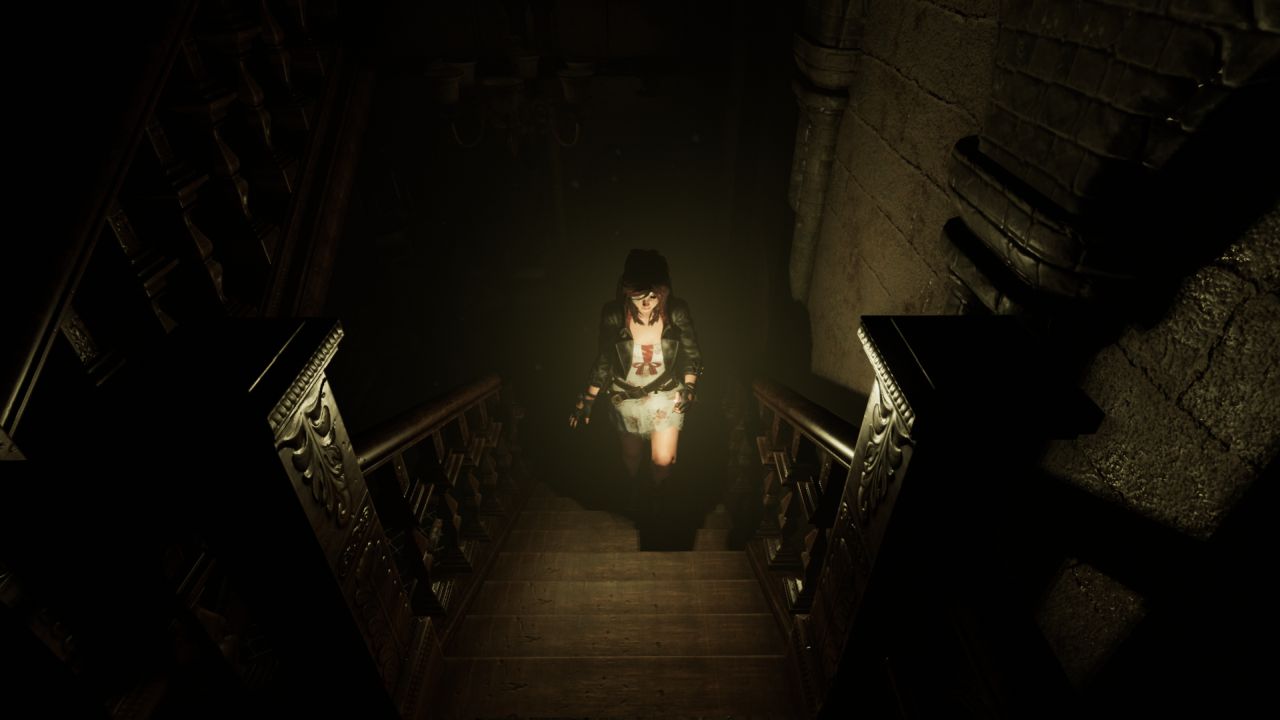 There’s no doubt that any fan of classic survival horror titles needs to pick up Tormented Souls. The game is full of Easter eggs to classic horror series and provides a look at what could have been for the likes of Resident Evil and Silent Hill. The visuals are detailed and beautiful with excellent light rendering and reflections, while the soundtrack is on par with these older titles. The gameplay is heavy almost to a fault, but offers different options to maneuver around the hospital. The characters and story are forgettable, but the focus of the game is on its design and how it plays. While it will be hitting other consoles at a later date and a physical release for PS5 is due in a couple of weeks, Tormented Souls is only $19.99 on the PlayStation Store and there’s even a demo to boot. There are too many aspects of Tormented Souls to appreciate for any fan of original survival horror titles to pass up.