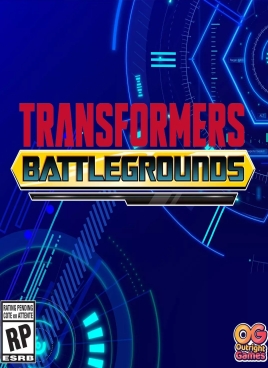 The Transformers franchise has been one of pop culture’s most enduring remnants of the ’80s. The original concept of robots that turn into cars has largely proven to be timeless, and despite the concept being perfect for a video game, we haven’t seen a ton of games based on it given its 30+ year history. The most recent mainline game was Transformers Devastation, which was a PlatinumGames action-focused brawler, and now we’ve got Transformers Battlegrounds based on the newer Cyberverse series that’s more in line visually with the original show than anything we’ve seen since that game.

In a drastic change of pace for the series, this isn’t an action-focused game and instead goes for an X-COM-esque tactical RPG battle system. Some may find this to be an odd fit for a series that’s so prone to action games, but it does wind up being a natural fit when you approach things from the perspective of having to be in this war in real-time. You would logically need a strategist to prepare your troops for battle and while the turn-based nature of things is a tad illogical in that context, it also makes some sense because each side would need a chance to gather their druthers and regroup to be more efficient in the future.

One problem that plagues tactical RPGs like this is that they can be tough to get into right away and Battlegrounds meets that problem head-on with a nice, robust tutorial that manages to convey all the information needed and not drown the user in long explanations. You’re given the skills needed to survive and excel, and if need be, you can always refer to things in menus to either gain clarification or catch up on anything you might have missed in real-time. As to be expected with the modern-day heavyweights of the genre, you’ll strategize your attack with your troops and determine the best plan to both maximize damage to your foes and minimize any damage you have to take. 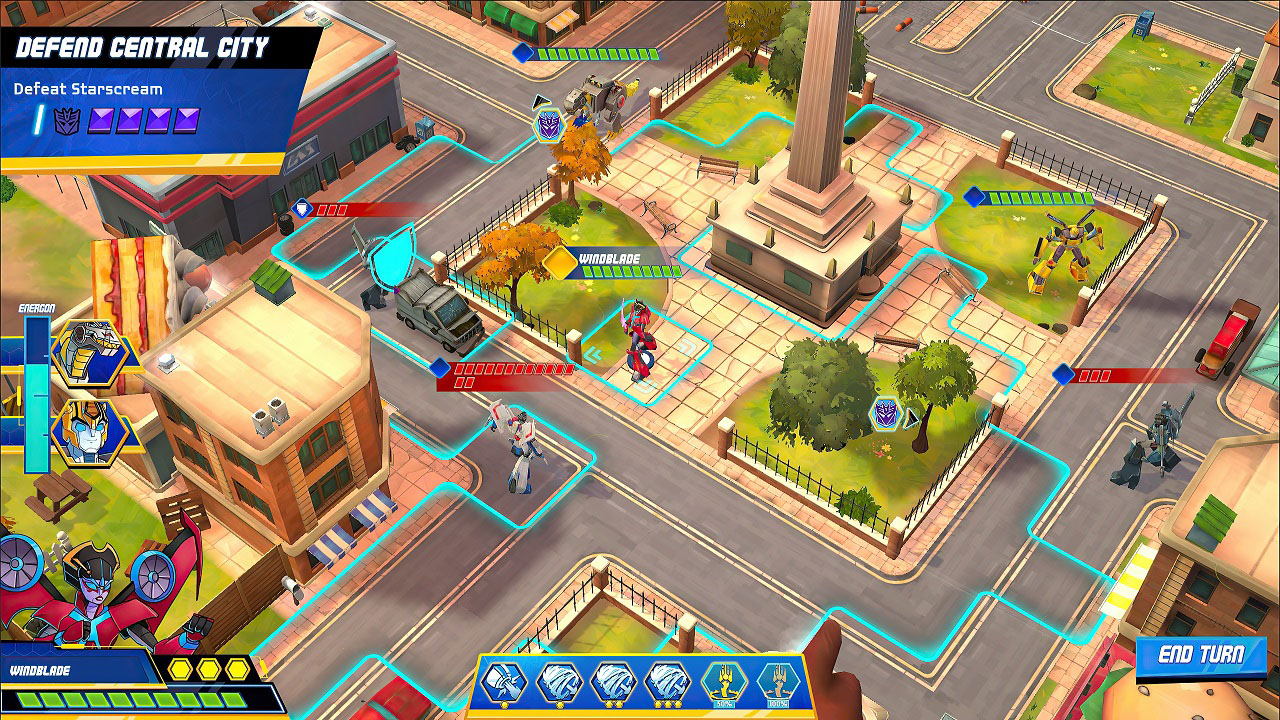 Each Autobot has their own pros and cons, with some being better at melee combat and others like Wingblade being able to fly over buildings and do a better job at ranged attacks. This means that if you’re outnumbered, it may be best to surround one foe and take them out before branching out and taking out others. Conversely, if you want more of a challenge, you can also just divide and conquer and turn it into a war of attrition. Either strategy is fine, but generally you’ll want to come away from a battle ensuring that you’re more efficient because that will be the key to winning the harder skirmishes and excelling in the side modes — which are a nice bonus and do a lot to extend the replay value beyond the core campaign mode.

Battlegrounds uses the standard action points system and you can blend things up more between movement or more damage depending on the situation you’re in. If you have a foe down to a couple of hits, then it’s probably worth using up the rest of your AP to get a more powerful melee attack in to take them off the field. The bumpers allow you to switch between different attacks and one great thing about Battlegrounds is that you can move, nail an attack and then move again depending on how many points you used up on the attack. If you want to stick and move against an annoying foe, then this tactic allows you to evade just like they are and minimize your own damage or you can switch to another ally mid-turn. This allows you to switch to a longer-range character and attack first before then switching back to the shorter-range specialist and maybe taking them out in one complete turn instead of spreading it out.

The turn-based strategy also allows you to take a risk and end turns early — which can be risky in a close battle, but in one that you’re doing well in, can reap some nice rewards if you wind up with more troops coming in mid-stream. You can boost up your Energon meter by nixing turns and build up your Ultimate attack that can deal out a ton of damage. You can wind up with shorter battles and make faster progress in the story or play it safe and just go back and forth with turns. You can fast forward the action with the bottom face button and that allows things to speed up when you’re just witnessing things like characters moving. Fast forward doesn’t do much during actual combat since those animations are so brief, but it can save you a few seconds during the more tedious parts of battles. 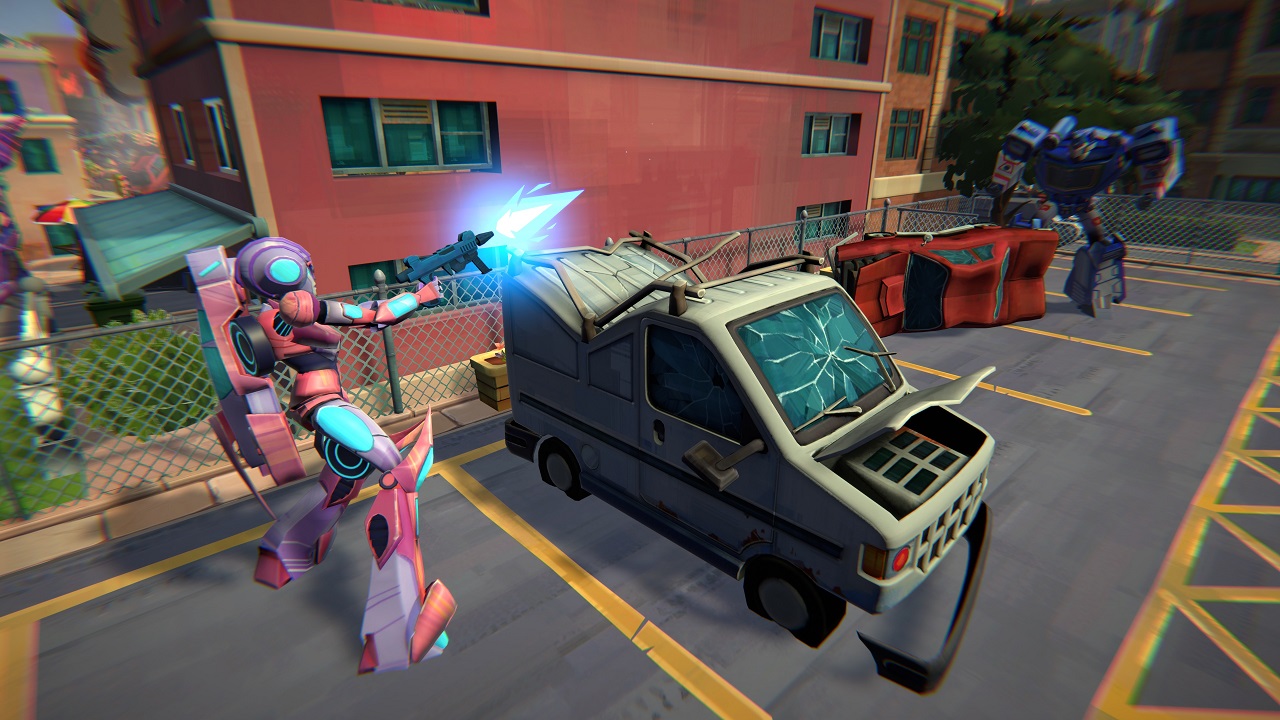 The core campaign is fun, even if the story is paint by numbers, thanks to the core combat. Outside of the campaign, there’s a diverse arcade mode with a lot of modes available within that. There’s capture the flag, grudge match where you can play as the Decepticons and the ever-challenging survival mode. This mode tests your skills because it puts the onus on the player not just to take out foes, but to be as efficient as possible and avoid taking damage while still racking up a kill count. Generally, a mix of a couple of story missions and then tackling an arcade mode was a more enjoyable way to approach things than just trying to plow through the campaign. This allows you to still make main game progress, but changes the formula up more and prevents the campaign from getting stale.

As much fun as the game is to play, it’s a chore to look at. It’s more on-par with an early-generation PS2-era release only in widescreen — and even then, it wouldn’t be an impressive game. Textures are low-quality all around and things like tires going through the ground are visible even in shots chosen to highlight the game on digital storefronts. Shadows are minimal and real-world texture detail for things like signs are blurry. It’s a shame because this isn’t just something you can blame on the Switch as that has Mario+Rabbids and looks far better than this in every way. Hopefully as time goes on on we’ll see patches help remedy this because in its early days, Battlegrounds is graphically one of the least-impressive Switch games.

Battlegrounds features a surprisingly high amount of production value in regards to its audio — in stark contrast to the visuals. The soundtrack is boisterous and gets your blood pumping, while full voice acting adds a layer of authenticity to the presentation and a lot of life to the action. The voice work is impressive too and goes far beyond the sparse animation to provide life and character to the cast. With the latter, everything is too stilted to get a sense for things like Gridlock’s sarcasm, but with the voice work, you do get a better feel for his character and that draws you into the story more than anything else. In-combat sound effects get the job done, but all sound similar and result in massively-damaging attacks sounding the same as minor ones more often than not. 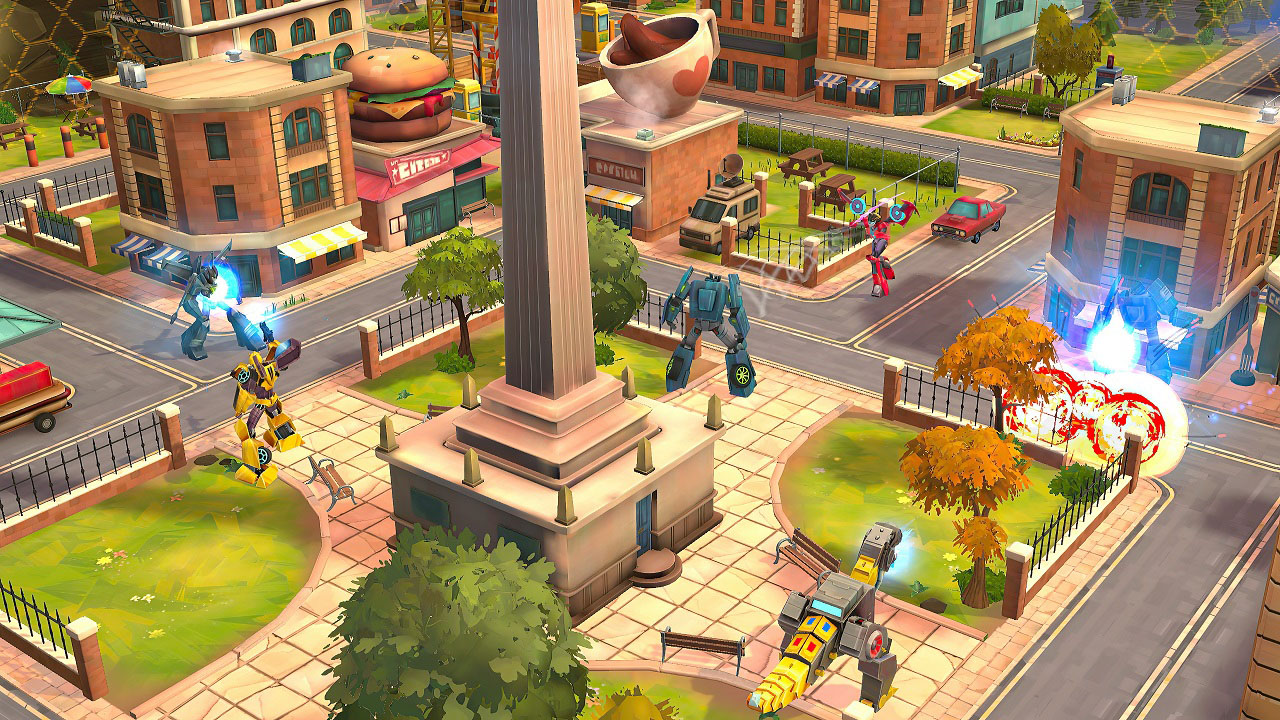 Transformers Battlegrounds is well-crafted when it comes to being a fine gateway into the tactical RPG genre. It blends a legendary cast of characters with tried and true X-COM-style action in a user-friendly manner. It does an admirable job crafting a game and several modes around the concept of the Transformers doing battle in a new gaming style, but falters in several ways. The fast forward function doesn’t do much good throughout much of a turn and there’s a lack of impact to attacks that makes battle ring hollow. The game does control well, but it’s an eyesore with low-end textures that would be more at home on a PS2 launch title than a new release in 2020. Thankfully, it does sound great with strong voice work from the newest Transformers series cast and its soundtrack gets the blood pumping when needed.