People are filled with squishy bits, pulsing and throbbing and exuding odd fluids. Keeping everything moving along is usually a self-regulating process, but diseases and accidents of all sorts are bound to happen. Different problems call for different specialists, however, and Trauma Team presents a nice cross-section of ways to fix people when they’re horribly broken.

Resurgam First Care is a world-class hospital with some of the finest medical practitioners available. Every job has a different set of responsibilities, and that leads to a good variety of game styles. Those familiar with the Trauma Center series will be instantly comfortable with the surgeon’s missions, but things start changing pretty drastically once the other characters come into play.

Trauma Team has six characters to choose from, each with their own gameplay style and storyline. Initially these stories can be followed independently, although they do intersect if you follow things chronologically, and once all the individual plot threads are complete it’s time for a multi-chapter rocket-ride finale putting everyone through their paces. It’s an engaging story with fun characters, and the plot twists along nicely to a satisfying conclusion. You’re going to have to fix a whole lot of people to get there, though, and that’s going to take six different styles of gaming. In no particular order: 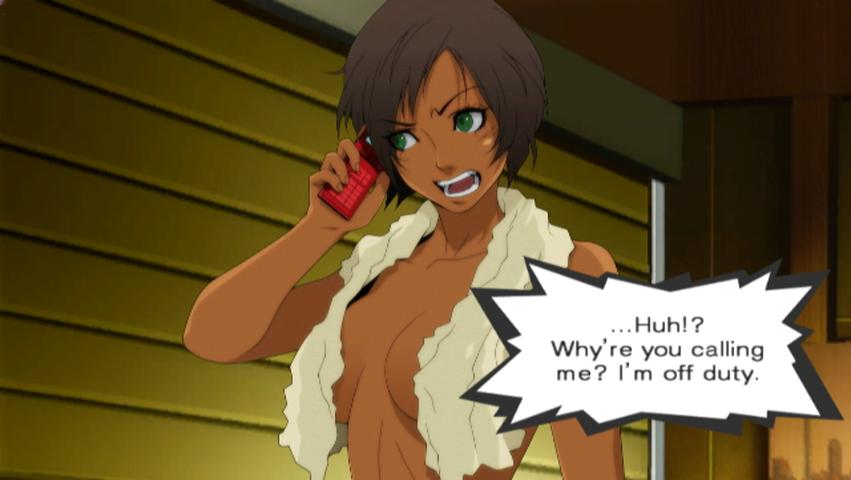 CR-S01 is an amnesiac prisoner who doesn’t remember the mass murder that he’s accused of, but his memory loss hasn’t impacted his surgical skills. His operations are most similar to the usual Trauma Center fare, as he cuts people open and fixes the bits inside using the normal series tools. The antibiotic gel and syringe filled with green goo work their usual healing magic, the scalpel cuts, forceps grab, drain sucks, etc. These operations end up being the most fun just because they’ve got the widest variety of tasks to perform.

Dr. Hank Freebird is a huge guy who moonlights as a superhero, helping people 24/7 as an orthopedic doctor and bizarre masked protector, and his missions play a bit differently. Hank’s operations emphasize precision, with no time limit or slowly-decreasing health bar. He works primarily on bones, putting them back together, driving screws and setting plates, fitting artificial joints, etc. Despite the emphasis on precision his operations end up being the easiest, and while they’re fun to perform it takes a fair amount of failure to avoid earning an S-rank when the operation is complete.

Dr. Maria Torres is a multitasking fireball in first response, and makes up for being a bit crazy by sporting epic cleavage. Maria’s tool set is stripped down for speed, because she’s usually got several people waiting for her attention and all trying to die at once. Her job is to stabilize these people so they can be transported to the hospital, and if she loses too many then it’s mission failure. Taken individually each patient is easier than in anyone else’s missions, but get five people all going south at the same time and things get nicely frantic.

The last of the surgeons, Dr Tomoe Tachibana, has the play style that deviates the farthest from the norm.

Tomoe is a Japanese ninja princess specializing in the use of the endoscope, a device that travels down the body’s pathways without having to cut anything open. Her view is more FPS-style, using a thrusting motion to push the view forward, and the analog stick controls the aim. When the reticle is within range and covering a target such as a blood pool, ulcer, or anything else needing attention, the injury is surrounded with a circle and icon indicating which tool to is used to treat it. The trickiest thing about Tomoe’s operations is navigation, as you need to be careful not to hit any walls, and it’s easy to get lost in some of the branching areas later in the game. 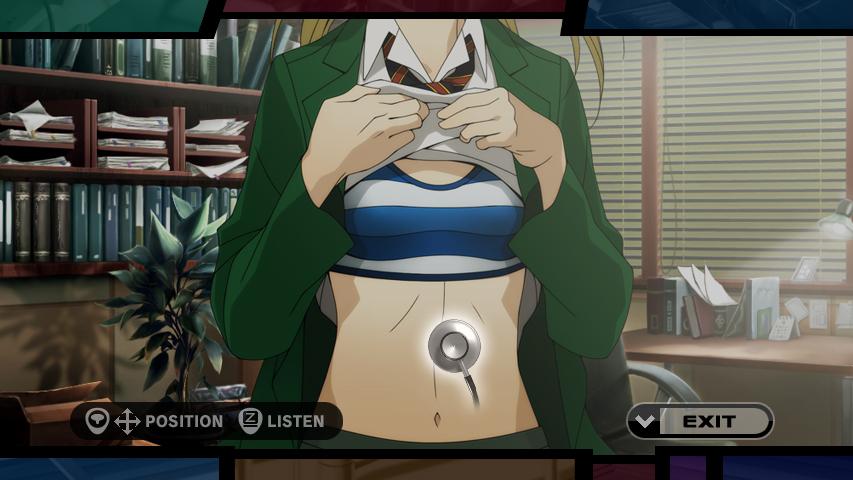 The last two doctors, Gabriel Cunningham and Naomi Kimishima, are the ones who most completely break the Trauma Center mold, as their jobs play out like point-and-click adventure games. Gabriel Cunningham is a diagnostician, and his job is to listen to patients, check their charts, examine x-rays and other bodily scans, and collate data to find out what’s wrong with people. He’s aided by the computer AI, RONI, who suggests diagnosis candidates based on uncovered symptoms, but it’s Dr Cunningham’s job to wheedle information out of patients who are sometimes uncooperative, or just unaware of what they should be sharing. Clicking on a bit of dialogue, a swollen body part, or a suspicious section of a body scan (which can be compared against a normal scan for those who don’t have the views of the human body’s cross-section memorized) brings up an option to flag an issue as abnormal, and getting it wrong counts as failure. The diagnostic missions are much longer than surgeries, but fortunately you can save mid-chapter.

Finally, Naomi Kimishima is our white-haired gothy mortician. Her chapters are similar to Dr Cunningham’s in that they play out adventure-style, but her job is to piece together evidence to sort out the mysteries of a corpse’s final days. Starting out by examining the body and personal effects, she gets evidence cards that act as clues she can combine towards building solid evidence. She’s aided by the analyst Little Guy, who she can send things like blood stains, murder weapons, and other bits of evidence to in order to squeeze more information out of them. Sure, that’s a blood stain at the death scene, but until the DNA is checked there’s no way to be positive it’s the corpse’s. Clues are turned into evidence one baby-step at a time, constructing a solid chain of reason towards the truth. Some of the logic is ridiculously obvious, and they’re very careful to hammer home the most important information multiple times, but turning a handful of random information into a completed investigation is pretty satisfying.

With so many game styles, there’s bound to be a few problems along the way, but most of them are small enough that they’re overwhelmed by the sheer variety on display. There’s only one major issue that comes to mind, and that only when compared to the previous games in the series. Trauma Team is an easy game, barring the odd sticking point in an autopsy or diagnosis, and it’s a rare surgery that ends in Game Over. Even the final surgery in the game was easy enough that I got an A Rank on the first attempt, making the whole thing feel anti-climactic. This could have been circumvented by a Hard mode, but that’s locked until the game is completed and by then it’s a bit late. Enforced easiness is an odd direction for a series once known for being awesomely tough in all the right ways. 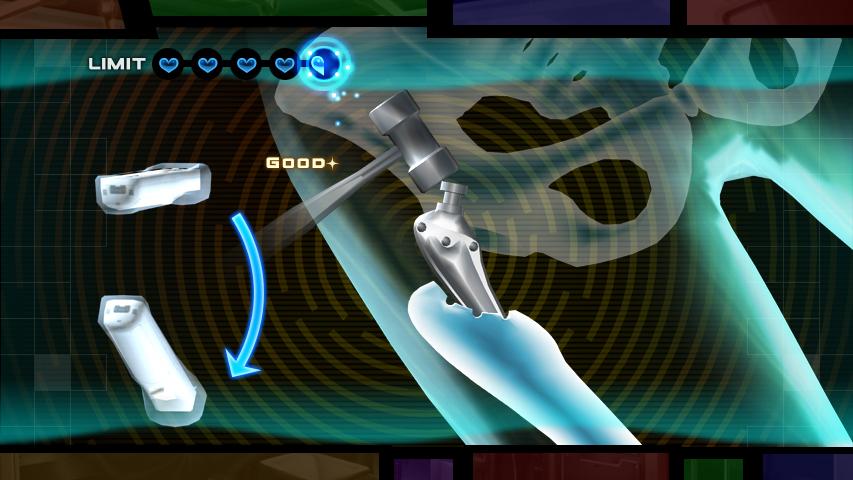 Still, despite being overly-casual, Trauma Team is an incredibly enjoyable game. I’ll admit that setting it in a ridiculously fictionalized version of my hometown of Portland, Maine (which the instruction manual incorrectly labels as Maryland) may influence my views on the story a bit, but it’s still a fun group of characters engaging in a large variety of very playable missions. There’s always something different to do, and it all fits seamlessly together in an epic whole. Trauma Team is completely engaging from beginning to end, and a fun ride the entire way.