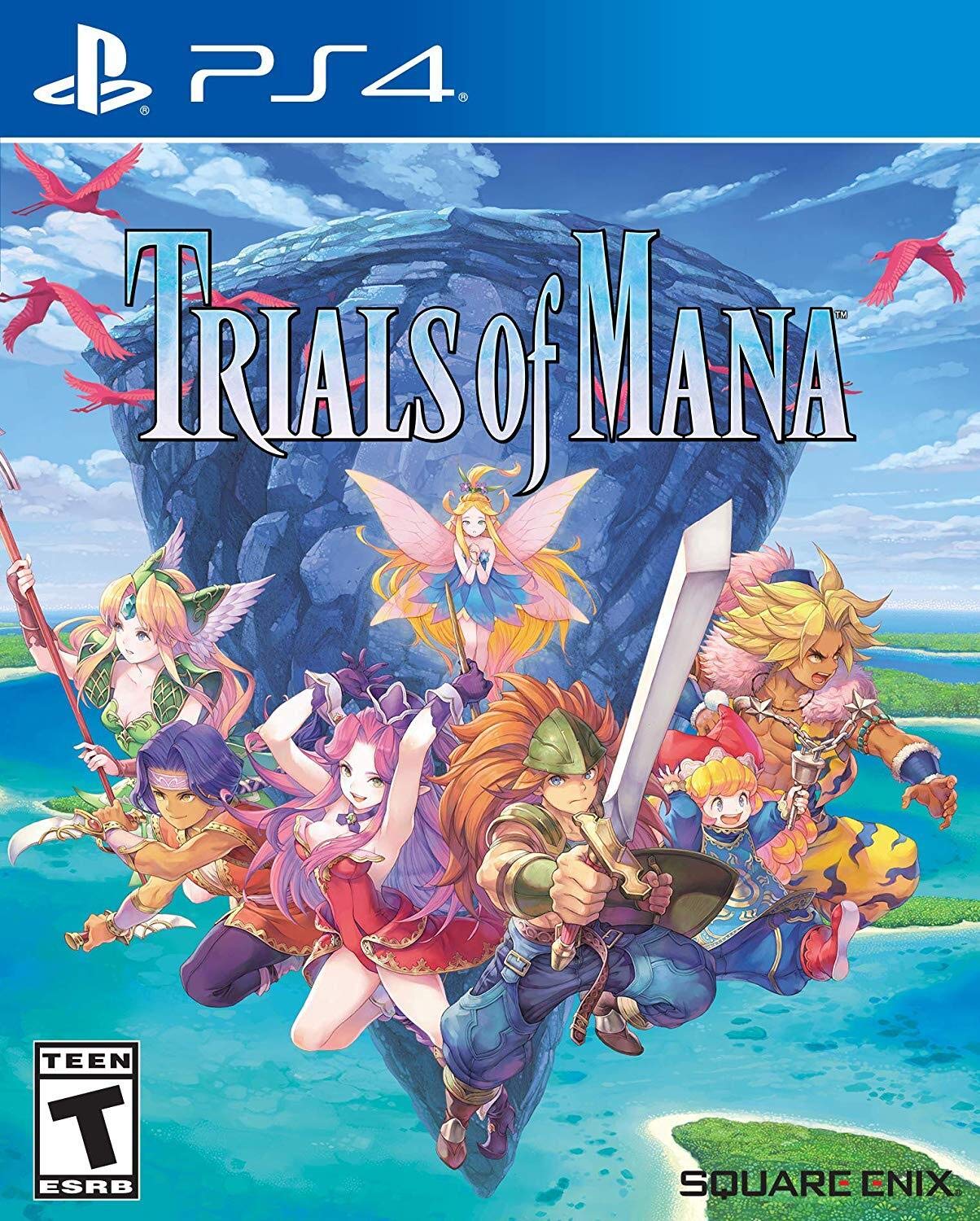 Last year Trials of Mana made its way into western audience homes for the first time ever in the Mana Collection. It was during this same time that a remake was also announced. The remake looked to be completely redone from top to bottom and that ended up being the case. From the looks of things it had completely re-imagined the combat and gameplay style so people could experience the wonders of Mana in a whole new way. So how does this remake hold up 27 years after the original?

The story of Trials of Mana doesn’t follow just one character, but six. The tale varies ever so slightly based on who is chosen to play as. Only three characters can be selected in each playthrough and they determine certain paths the story will take along the way. Although the majority of adventure will be the same across characters, it’s the differences that make each one stand out. The broad story is that the Tree of Mana is dying due to the rise of dark forces and a hero is needed to take the Sword of Mana to help restore it. Faeries leave the tree in order to seek out someone to help, and after running into a hero along the way, are chosen to help save the world. The cast of characters chosen must help find the elemental spirits and stop dark monsters from taking over if they want to see the world return to peace once more. All along, each character deals with their own issues from their home town following them along the way whether it’s trying to avenge a death or simply trying to find a loved one. The differences in story are what make it so enjoyable to replay, as every character approaches situations in a different way to make things interesting.

In the original title combat was all done in a overhead setting. Now the remake has characters in a fully 3D world with a brand new combat system that’s more action-based than the original. The combat system is a familiar one that uses light and heavy attacks to make quick, flashy combos. Each character also has their own selection of Class Strikes, which are special heavy-damaging attacks that need gauges filled in order to use. In addition to this, many characters can also use magic abilities when elemental spirits have been found in order to buff, heal and even deal some good damage. Certain characters are better at spells or physical attacks than others, making it fun to try out different types of party combinations. It’s entirely possible to go in with a team that’s made up entirely of heavy hitters and rely on healing items, or go with a more traditional JRPG styled team to play it safe. There’s tons of possibility all thanks to the class system for each character. 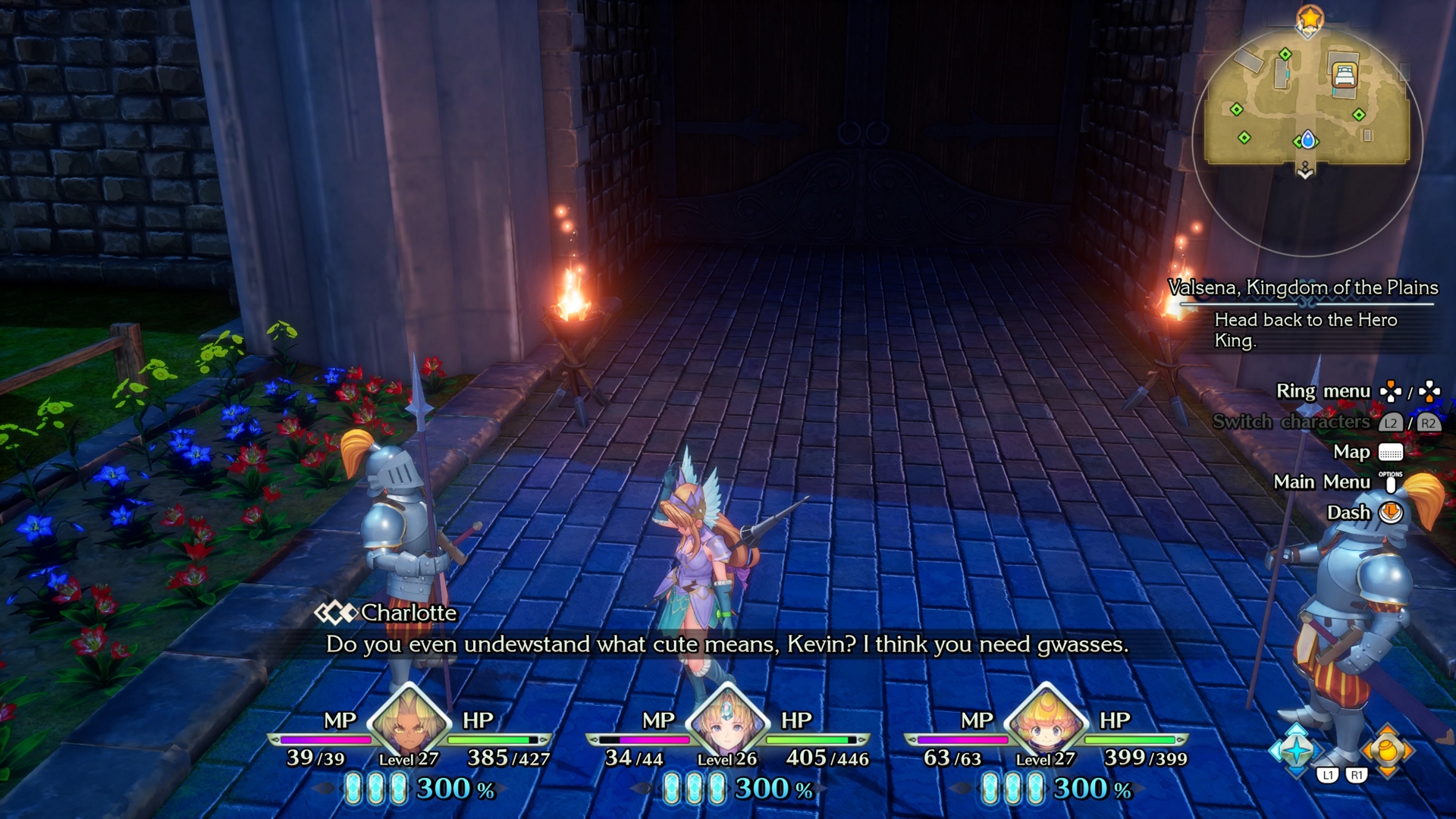 Classes are what genuinely make Trials of Mana so fun and unique compared to its predecessors. Early on characters have the opportunity to change classes at mana stones which give them their unique abilities. Changing classes leads characters down either a light or dark path, with each one having unique abilities. Every level earned gains points that can be spent on abilities or stats while changing classes unlocks all of these. It’s worth noting that all stats can be fully maxed out at high levels, but a first play through usually won’t yield such results. There’s a place to reset stats, for a fee, for anyone who decides to change things around as well. These classes allow for the unique variety that makes playing through multiple times so much fun, as no two parties are likely to be exactly the same setup when there’s tons of options to choose from along the way.

Aside from combat, one of the wonderful changes is how the world is now presented. The original overhead style worked and was iconic, but areas in full 3D feel more thought out than ever before. Being able to see what’s ahead is nice and makes each area more memorable. Loading times within the same area are also quick and snappy, but areas between larger key areas can drag a bit here and there, especially when going between them quickly. There’s also a bigger emphasis on platforming, which wasn’t in the original, adding a great sense of vertical space to each area. They replicate original ideas to locations, but adding a grand new level of exploration that makes it feel like an even larger adventure for those who want to explore. 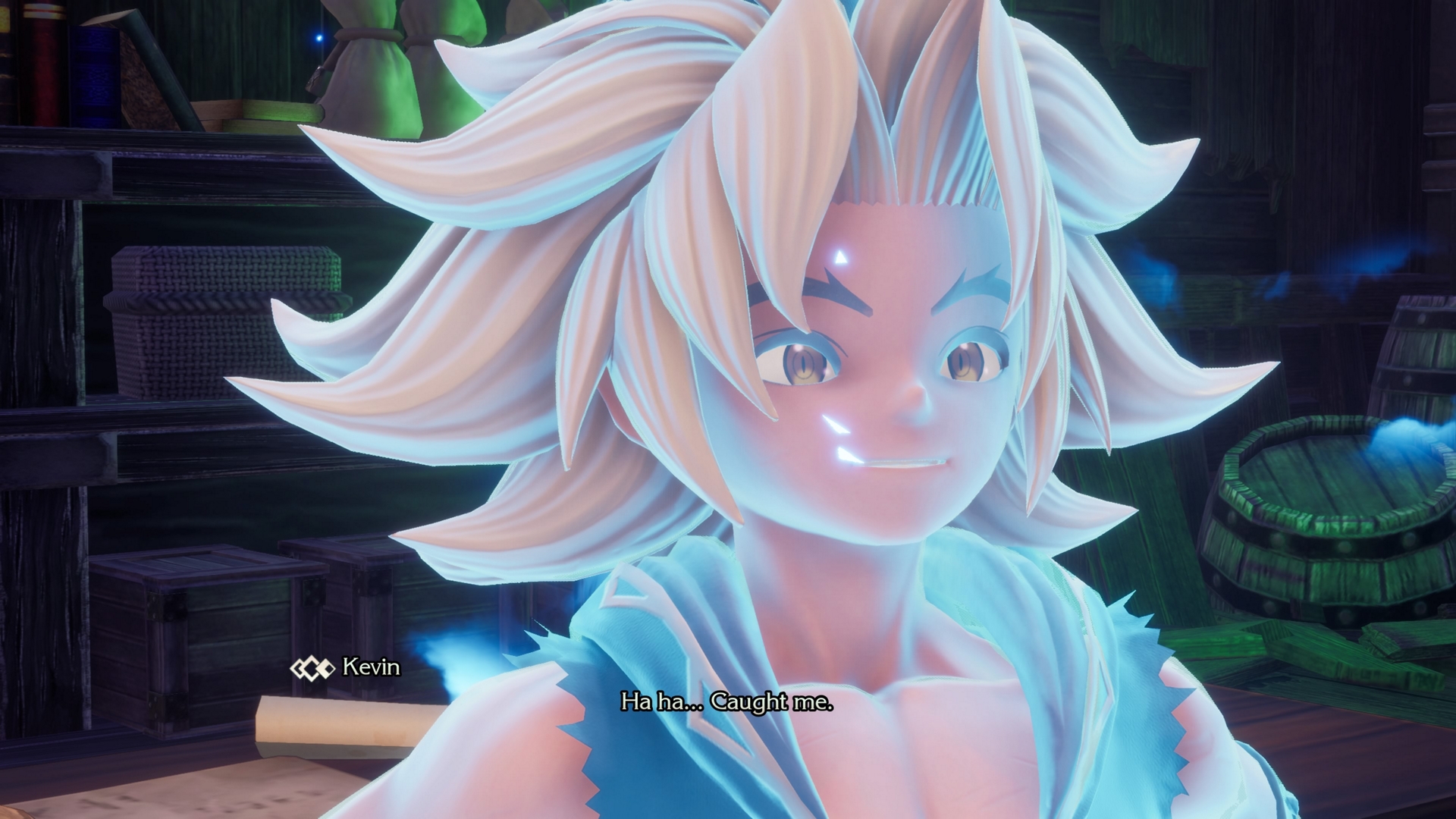 Although the vast majority of players picking up the Trials of Mana remake will likely be new to the title, there are some great changes that boost the experience. When starting out players only begin with their main party member but quickly come to meet the others along with the story. After meeting with them, an opportunity is given to play through their opening story in a flashback-like sequence. In the original this was briefly portrayed with a quick summary, which is still available here if chosen, but being able to play through them really highlights the story of the entire party and gives a better emphasis on everything at stake. While there’s also no longer multiplayer, the way to control AI allies is much easier than ever whether it’s quickly switching between them in battle or simply commanding them to use a magic spell.

The visual overhaul in Trials of Mana is simply fantastic. It keeps the lovable, anime charm of the original but translates it into beautiful scenery that’s reminiscent of the original. Each character is delightfully animated and detailed, with enemies and areas being greatly detailed down to little things. The English voice acting does leave a lot to be desired, but the Japanese voice option is top notch. The music deserves endless praise, as the new remixed soundtrack is a delight on the ears. There’s an option to play the original SNES soundtrack as well and it’s fun to switch between both to hear the differences and impact they both make. There’s occasional texture pop-in here and there, but it’s not enough to be bothersome and is usually momentary. The framerate is also extremely consistent with no noticeable drops even when the screen is overwhelmed with special effects and attacks making for a wonderfully butter-smooth experience. 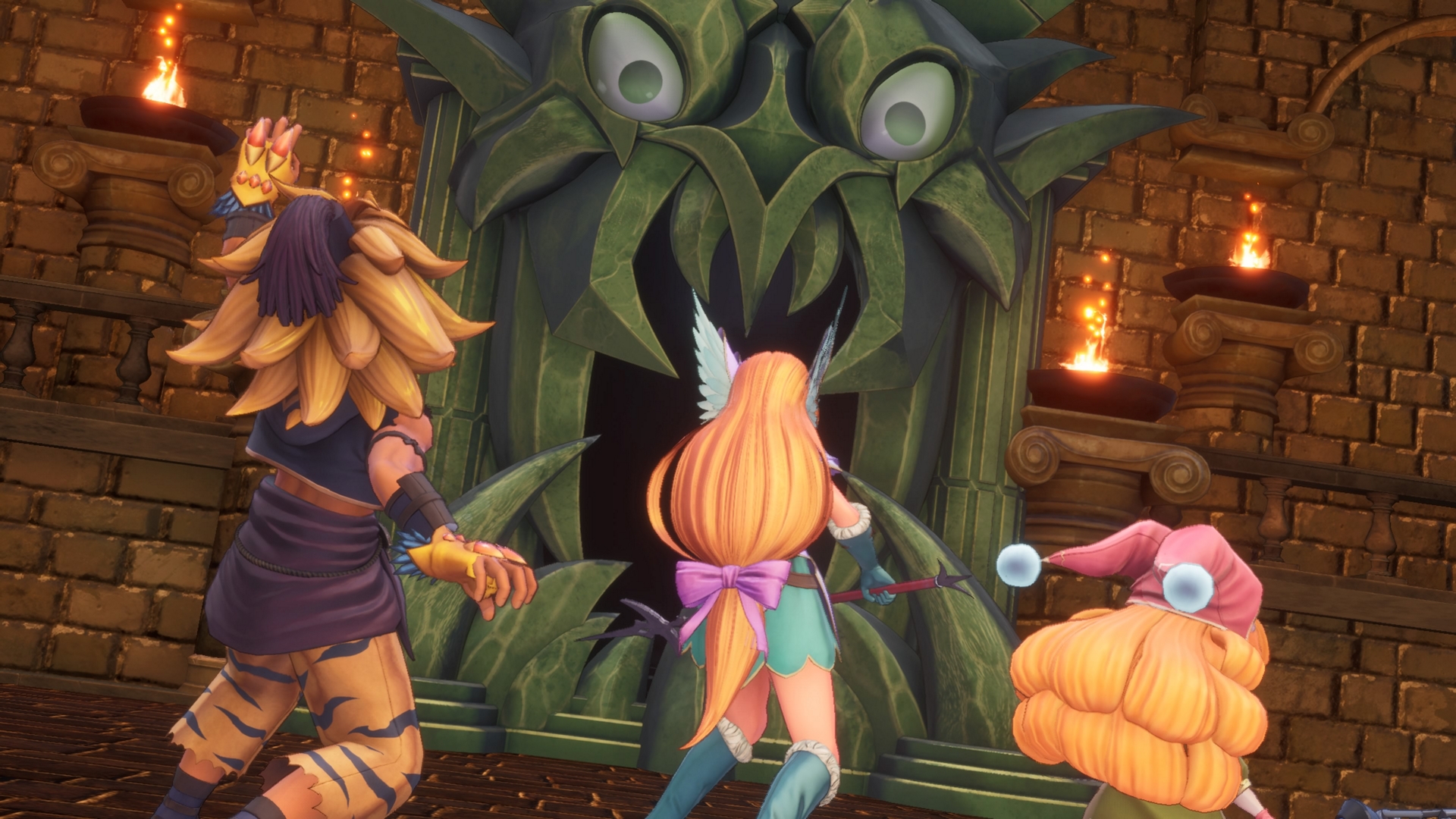 At this point, the first three original Mana titles have all received remakes. Trials of Mana not only wipes the floor with the other two, but stands so far above them it’s hard to believe the vast difference. It’s a fantastic remake that captures the original story and characters with an amazing new way to enjoy it. The combat is ridiculous amounts of fun with brand new variety available that showcases the wonderful differences between each character and their play styles. The music and visuals are truly at the top of their game and make the experience all the more enjoyable with how wonderful they are at all times. Anyone who enjoys action RPGs should pick up Trials of Mana as it’s a fantastic experience worth replaying time and time again.