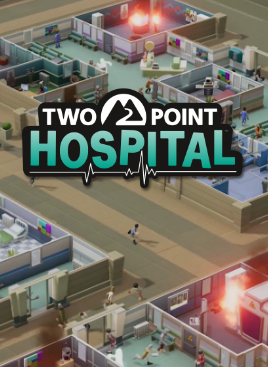 The 1990s are often named as the golden age for many a video game genre. Platformers, JRPGs, 3D adventures and even horror games all rose to prominence during this time and many of these are now enjoying a nostalgic reinvigoration after twenty years of gradual decline. The 90s were also the heyday of the simulation game, with the likes of Populous, Theme Coaster and Theme Hospital all releasing within its confines.

The latter game doesn’t enjoy as much notoriety as the other two, but its offbeat brand of comedy and odd premise were enough to win it a cult following. Its spiritual follow-up, Two Point Hospital, is the latest title in the resurgent simulation genre that’s been gaining steam for several years. Like its peers, Two Point Hospital doesn’t just copy what came before, but instead uses it as a foundation to reach new heights. This isn’t Theme Hospital remade; It’s Theme Hospital improved.

Two Point Hospital takes place entirely within the expansive Two Point County, a county so large that it has several biomes. The player starts their career as administrator of a single, no-frills hospital. Emergencies are few and the pacing mellow; it’s the perfect place to get into the groove of the game and prepare for the insanity coming later. Players will eventually find themselves in charge of a whole network of healthcare facilities, each with its own unique needs and quirks. Some will be located in cold, mountainous foothills catering to accident-prone skiers. Others will be located in Two Point County’s balmy southern regions, where having a boatload of A/C units is just as important as having enough diagnosis rooms. Still others will be located in major city centers, where foot-traffic is plentiful and crises are common. It doesn’t matter how talented a manager the player is, there’s no such thing as a single winning strategy that applies to all hospitals. 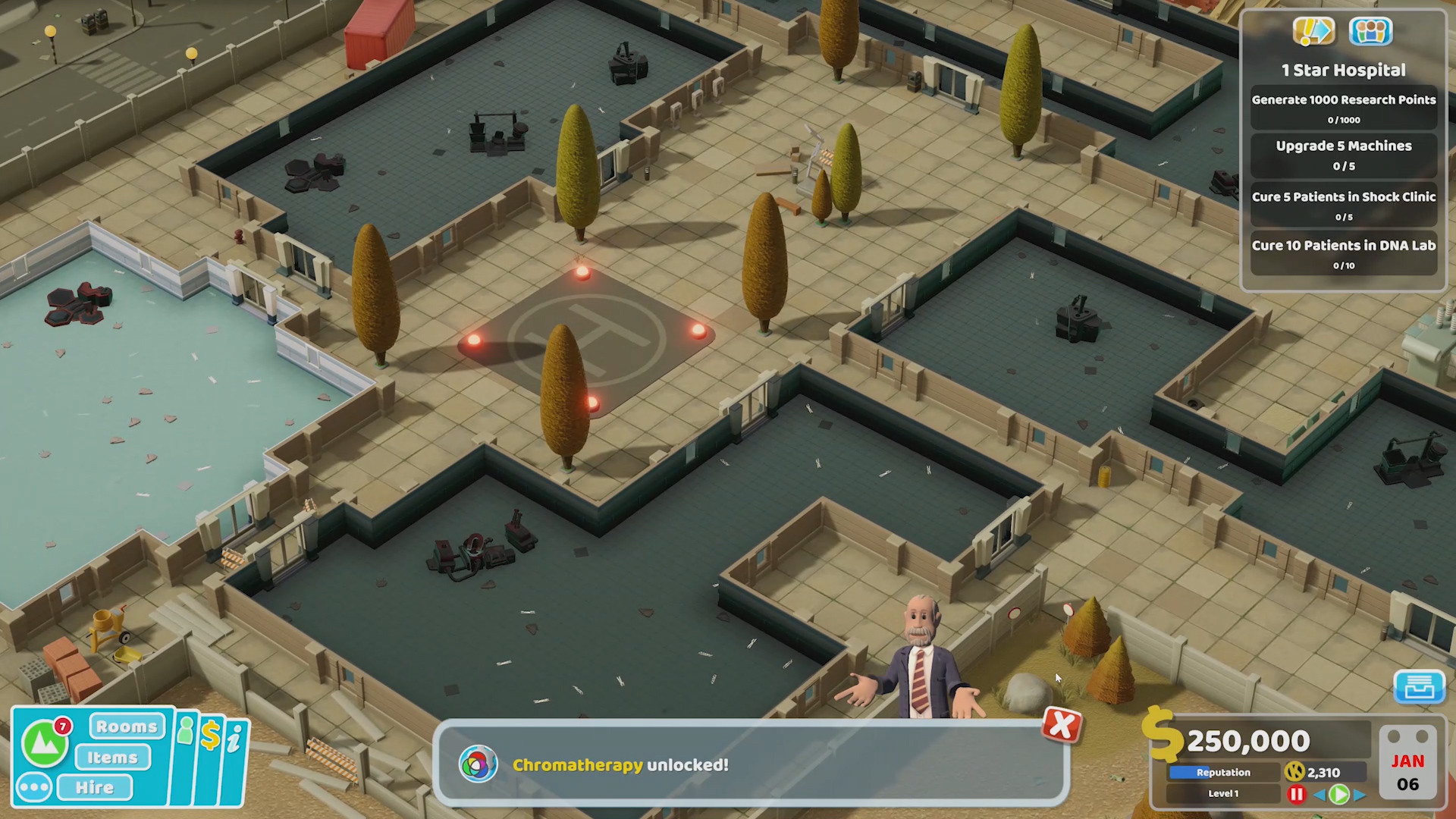 Progression in Two Point Hospital is tied to each hospital’s star ratings. Getting one star is easy enough for the most part. All one has to do is fulfill a stage’s initial set of goals. Once that’s done, the next hospital opens up and the player is allowed to advance. These goals can take some time to reach, but they’re all easy enough to reach that even those new to sim games shouldn’t have that much trouble with them. It’s getting the additional stars that will force players to get creative with their strategies and really dig into the available systems.

Playing Two Point Hospital can be broken up into two sections: building and managing. Each stage is kicked-off by building the initial set of rooms every hospital needs and then continually adding and improving them based on the hospital’s needs. Building a room is as simple as choosing it from the menu and then clicking and dragging in the space the player wants it to occupy. Rooms can be just about any shape the player wants; they can be simple rectangles, large squares with the corners cut-off and so on. They can be rotated any which way, and can even be picked up in their entirety and moved to a completely different part of the hospital. So long as they meet the minimum dimensions, usually 3×3, anything can be done with them. Each has its own unique furnishings that appear in the top of the items menu while building them, so one never has to be worried about accidentally leaving a room unfinished.

Hiring staff is as easy as clicking into the “hire” menu. Each room specifies what type of staffing it needs and each potential staff member has their own set of strengths and weaknesses for the player to consider. If one’s only going for a single star on each of their hospitals, then these skill won’t matter too much aside from a couple of essentials. Those looking to move beyond that first star, however, would do well to carefully consider whether the skills and personalities of their staff will be suited for the position they’re being considered for. Hiring a nurse with no pharmaceutical talent and bad people skill for the pharmacy will work in a pinch, but it won’t be too long before they become more trouble than they’re worth. 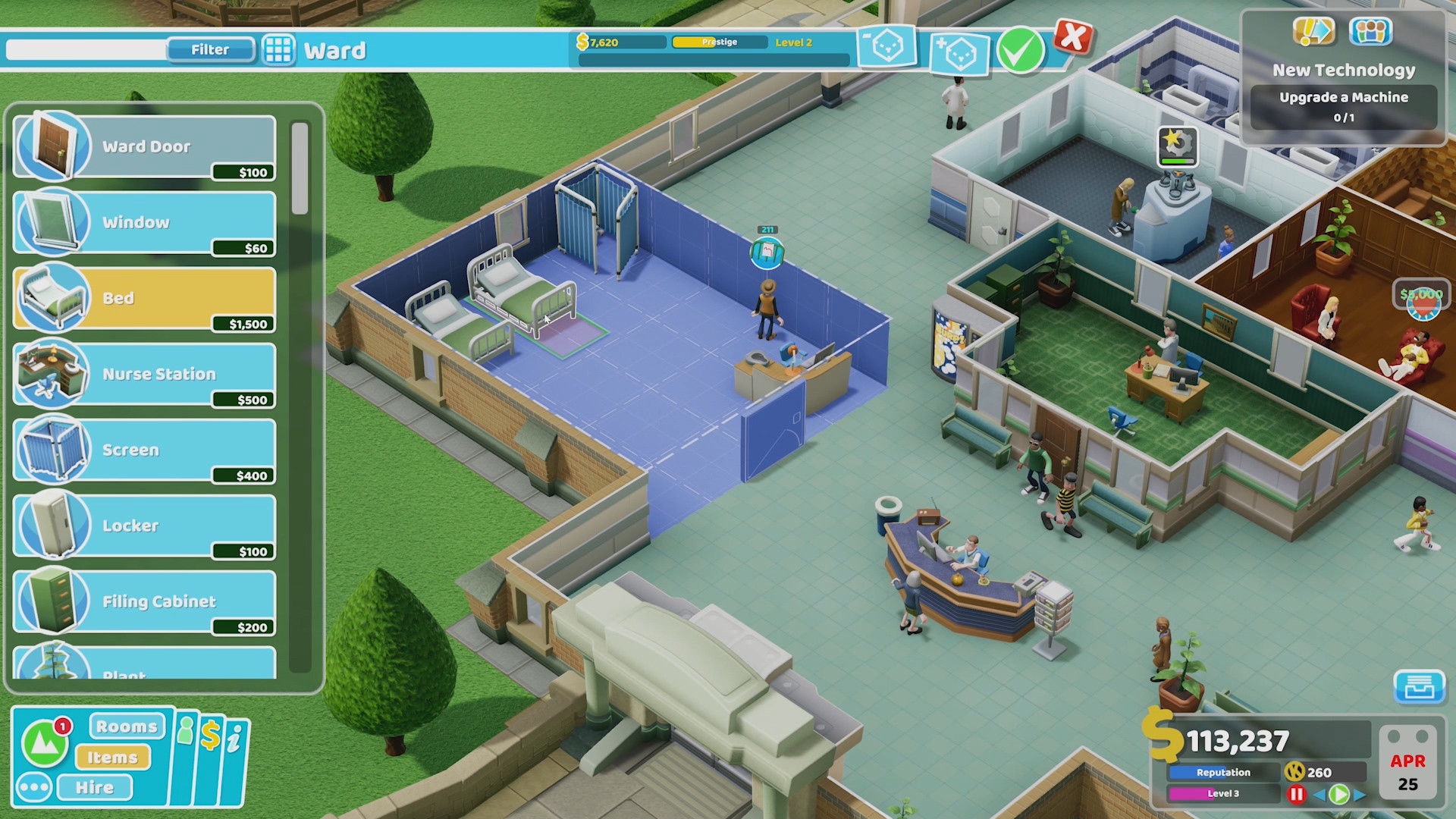 Managing staff is done from the “staff” menu. From here, players can see exactly what their employees are up to, their happiness, how tired they are and where they’re located. The room they’re assigned to doesn’t show up here unfortunately, but learning that is a simple matter of clicking on the rooms themselves. Individual performance is a little hard to judge from these menus, and is more a matter of paying attention to what’s going on in the hospital. If treatment is failing for multiple patients in a room, then that’s a good indication that the individual working in there should be reassigned. Of course, these menus offer more than just construction tools and staff whereabouts; just about everything one could want to know can be found here.

Two Point Hospital offers its players finance screens that track everything from profit and loss to a complete log of all the money that went in and out over a given amount of time. Players can also track how their hospital is doing in terms of cure rates and patient satisfaction. If they see a dip in the graph, a trip to the log should be enough to find out what caused it. Two Point Hospital players also have a plethora of visual modes available to them. Some show areas of coverage for qualities like heating, cooling or visual appeal, while others track stats like patient happiness. If one is having difficulty diagnosing what’s keeping them from earning that second or third star, these visualizers should help make the problem easy to spot.

Acquiring those additional stars isn’t just for satisfaction’s sake either. Two Point Hospital has a sizable list of organizational milestones to hit, all of which award the player with a special currency called “Kudosh.” This can then be turned into any of a wide variety of special items to give those hospitals a little extra zing. All of this doesn’t have be done all at once either. If hitting the second star seems impossible right away, just come back after progressing through a couple more stages and using all the technology and skills unlocked during their establishment. There’s plenty here for those looking to dive deep into the system and get the best score they can, and there’s even more if one has friends that enjoy sim games. There’s no direct multiplayer, but Two Point Hospital does feature online leader boards to compete in. Just remember that it’s the patients that come first, not the organization’s prestige. 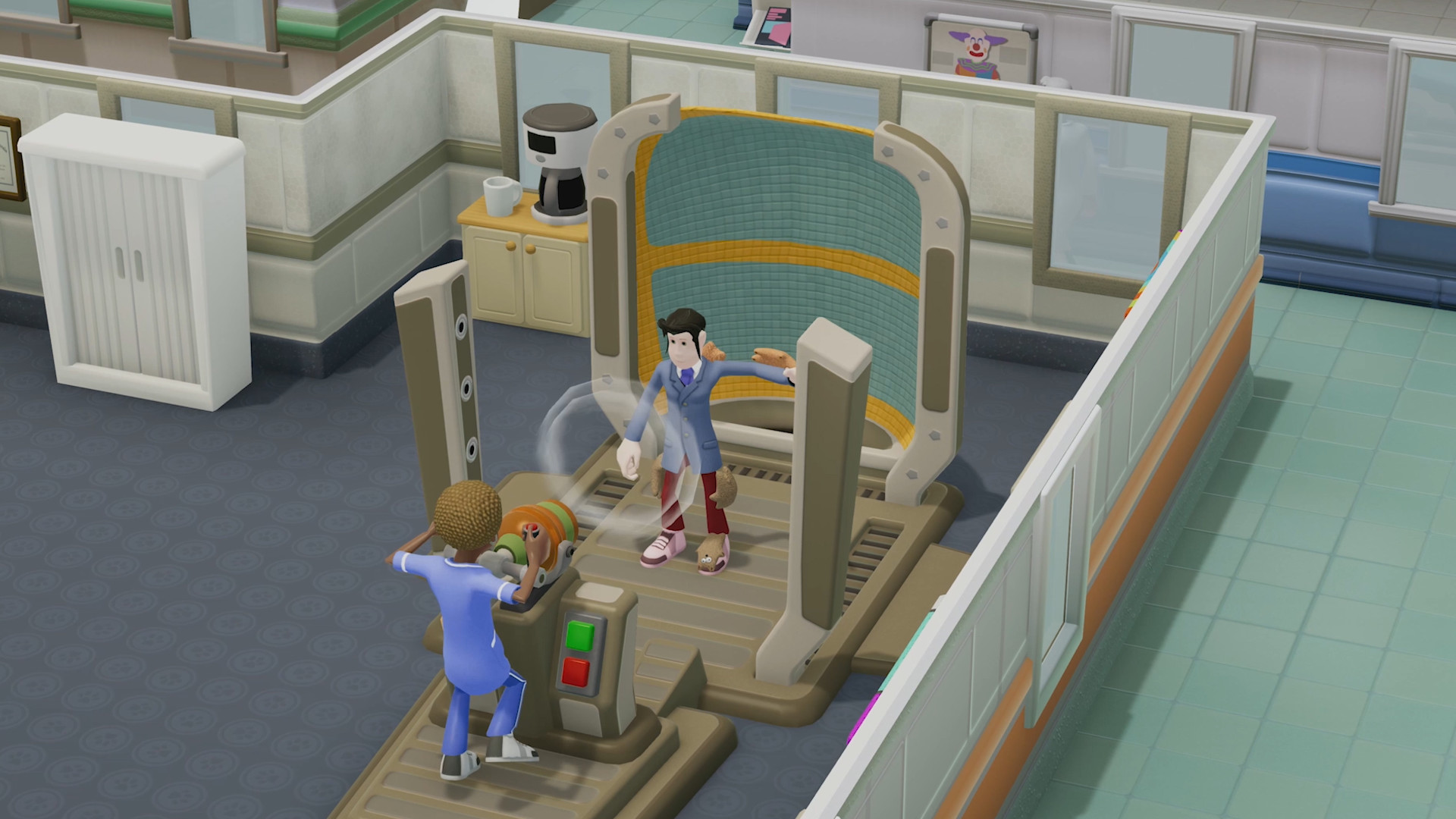 Speaking of patients, they’re likely to be the oddest bunch one’ll ever encounter in a video game. Like its spiritual predecessor, Two Point Hospital prides itself on its visual humor. Every illness is a pun of some kind. “Clown Syndrome,” “Grey Anatomy,” “Mood Poisoning” and “Night Fever” are only a handful of the manic diseases the doctors and nurses of Two Point Hospital will have to attempt to cure. And those cures aren’t much better. From literally exchanging light bulbs for new heads to spray-painting the color back into people, the treatments developed in one’s hospitals are as hilarious as they are oddly terrifying. The cure for clown syndrome stands out particularly vividly, as it involves luring them into a fake circus tent scaring them straight. Beyond this, the game sports a pleasing claymation-esque visual style, mellow music, and a menagerie of nutty radio personalities that never fail to inspire a smile.

It wasn’t a completely smooth experience; there were a few audio hiccups and instances where patients got stuck in places they shouldn’t have. I also found myself wishing there was a way to institute regular shifts so that my tired doctors could take breaks without causing massive queues. Building multiple rooms of the same type helped mitigate the problem, but some additional uniformity would have been nice. Admittedly, the functionality might actually be in the game, I just haven’t been able to find it yet. 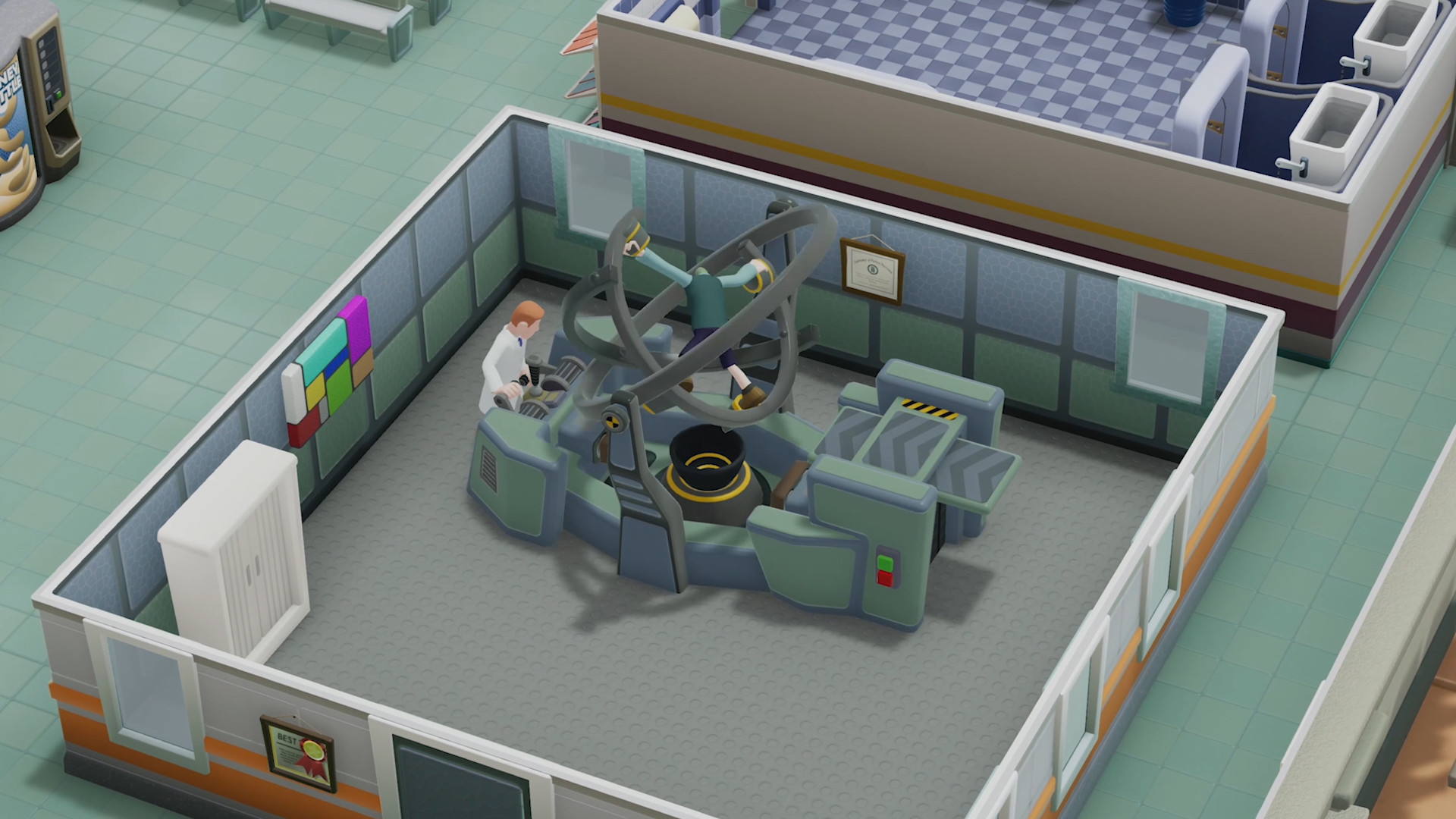 Even as a relative newcomer to the sim game space, I found myself enjoying my time with Two Point Hospital. Minor bugs and functionality wishes aside, one can do pretty much everything they need to in order to succeed here. Information is easy to find for the most part; construction is easy to learn and handle, and there’s plenty of optional depth here for those who want it. Put it all together with a pleasing art style and entertaining comedic stylings, and the result is a simulation game that just about anyone can have fun with.