It might be hard to believe, but there was a time when vector graphics were seen as the future of video games. Arcade titles like Tempest and systems like the Vectrex held to those principles although they ended up as just another passing fad. Tempest, however, has not died. Tempest 2000 came as practically the only worthwhile game on Atari Jaguar and quickly garnered a following. Jeff Minter’s wild recreation of the arcade classic became a much-loved hit. Space Giraffe was a later, even trippier jaunt through Tempest territory but unfortunately landed without much attention. Now that the Vita is becoming an indie platform, Jeff Minter and Llamasoft are at it again. TxK is the latest rebirth of a now 30 year old game and it stands as another fantastically modern interpretation.

For those who have never experienced any flavor of Tempest, let’s start with the basics. TxK is first and foremost a shooter. You control a small polygonal ship around a stage by pressing either left or right. Stages themselves are often geometrically shaped or curving, and you can only move around on the “lip” of the stage. Enemies will arrive at the tail end of the tunnel and continually progress forward. Your goal is to destroy them all before they reach the edge where you reside. Basically, it’s a lot like if Space Invaders were in a 3D plane instead of 2D, as the enemies progress from the back of a stage to the front.

There’s also a variety of powerups to nab as they travel toward you. Powerups range from speedier bullets to an AI partner that will likely save the player on more than one occasion. The jump functionality also comes from powerups and allows the ship to temporarily escape the platform. This is incredibly useful when being overwhelmed by enemies. Instead of crashing into one next to you, simply jump up and shoot them down before landing again. Sometimes, the game is also kind enough to toss an extra life your way – just make sure to actually grab it before it flies off into space! 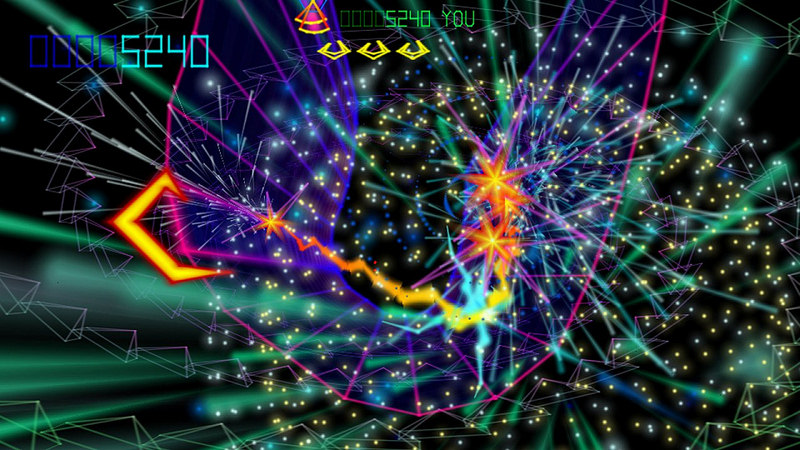 Each stage has its own design and enemies that will quickly proliferate it. At first, TxK doesn’t seem too tough, but it quickly becomes a lot more hectic when new opponents appear. Some require multiple shots and others slink around the stage instead of simply moving forward in a straight line. Eventually, it becomes a huge mess and you’ll likely have to replay the same stage a few times to complete it. Thankfully, you can always jump back into the last stage played instead of being forced to start from the beginning again.

For those who are fans of Tempest 2000, it might not seem like much has changed. AI droids, jumps, and many of the other basic features of TxK were already implemented in the Jaguar version. So what has changed and makes this version a necessary pickup? Simply, it is a far more visually and audibly stunning version than was ever possible on older systems. Although the older game might fill you with fond memories looking back on it now reveals that it definitely was held back by technology. The Vita version has no such restrictions.

Starting up the first level reveals a spectacularly colorful and explosive game. Enemies and stages are decked out in neon colors and the explosions are suitably cool-looking. Where the previous game seemed almost barren, TxK is constantly pulsing with colors and throwing particles all over the place. In a way it’s overwhelming but only takes a while to get used to. By then, it becomes immediately apparent how much time must have been spent designing the look. Somehow, the game manages to look retro with vector art but also like a title that completely belongs on a modern handheld. The art style is simply divine. However, it is a game best avoided if you are prone to seizures.

Then there is the music which stands as perfectly fitting with the excessive art style. Whereas Tempest 2000 had a very 90s selection of electronic music, TxK is filled with music more fitting for the 2000s. The music is still easily classifiable as electronica, but of the variety that will mesh with current fans. There are even some serious house music tracks included which may help lure in older fans as well. Overall, the soundtrack is once again a shining portion of the experience.

The roots of Tempest are hard to break. TxK works off the existing — and very entertaining — formula to create a nearly perfect version. The Vita’s OLED screen has likely not seen a game as simple and beautiful as this yet, which makes it quite a treat. With pick up and play gameplay that’s as addicting as ever, it also works as an excellent portable game; it’s just a shame that the gorgeous visuals couldn’t show up on a big screen via home consoles or PC. Definitely take a look at TxK if you’ve ever enjoyed any version of Tempest. Heck, grab it even if you haven’t and give yourself a proper introduction to a truly great game.